Giro’14 St.6: The Battle For Montecassino!

Race Report: Yet another rain swept day in the Giro d’Italia and it was good for Michael Matthews and Cadel Evans, but certainly not for many others. At the end of the day the race was split after a massive crash in the terrible weather conditions and the opportunity was grabbed by the two Australians.

As the early break was caught all hell let loose on the slippery Italian roads and half the peloton found themselves on the tarmac. The carnage allowed a group of eight to escape in the confusion and the pink jersey of Michael Matthews and BMC’s Cadel Evans were to the fore. Matthews threw his arms in the air at the summit of Montecassino and Evans took minutes out of some of his adversaries. 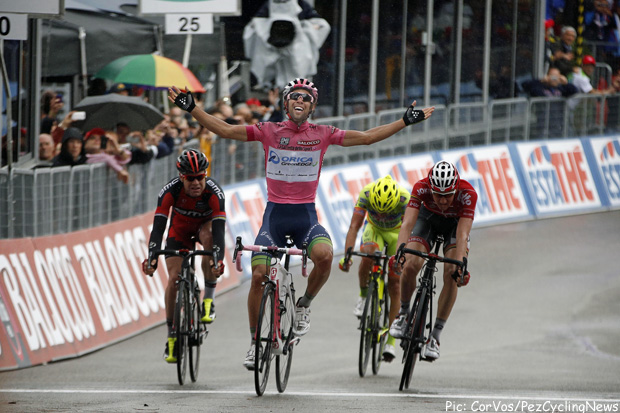 Sassano to Montecassino: The Longest stage
The menu today was mostly flat prior to the final climb of Montecassino. Rolling sections early on, then passing through Salerno, Cava de’ Tirreni (112.8 kms, Cat. 4 climb), Maddaloni (168.4 ms) intermediate sprint), before Cassino and the start of the final climb. The final climb is approximately 8.5 km long with an average gradient of 5% touching a maximum of 9%. After a number of hairpins on the lower slopes, the road spirals up the mountain. The final section is much less steep and the final 40m is on 6 metre wide asphalt with a slight curve.

The weather forecast was for scattered showers and an average temperature of around 18ºC. 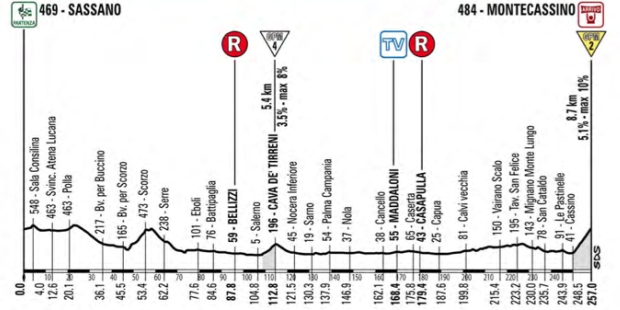 Due to an un-cleared landslide near Polla (Salerno), it was necessary to amend the race route with the diversion adding 10 km to the length of the stage. To accomodate the start time was brought forward by 15 minutes to 10.45 am. In compliance with Race Regulations, there will be two feed zones, located in Bellizzi (Salerno) km 88 to 91 and in Casapulla (Caserta) km 179 to 182.

The Start
Four riders headed up the road 10 kilometres after the de-neutralised zone, they were: Marco Bandiera (Androni Giocattoli), Edoardo Zardini (Bardiani-CSF), Andrea Fedi (Neri Sottoli) and Rodolfo Andres Torres (Colombia). Their lead on a fairly disinterested peloton eventually reached 13 minutes with 185 kilometres to go. As is normal; the Orica-GreenEDGE team of the overall leader, Michael Matthews, was on the front of the bunch and the lead had been cut to a more manageable 10 minutes as they approached the first feed zone after 80 kilometres.

Sky sent some riders to help Orica with the chase and with 165 kilometres to go the lead had come down to 8 minutes.

100 Kilometres To Go
Through the town of Cicciano Sky and Ag2r-La Mondiale took control of the chase which was 5:20 down on the leaders as the rain started to fall at the finish line in Montecassino.

At the special sprint in Maddaloni with 82 kilometres to go and without a sprint it was Fedi, Bandiera, Zardini and Torres in that order. The bunch came through 5:43 down and Nicola Ruffoni (Bardiani-CSF) got the 1 point on offer, beating Tuesday’s stage winner Nacer Bouhanni (FDJ.fr).

Through the second feed in Casapulla with 70 kilometres to go and the lead had only come down a few seconds to 5:10 and Sky were again riding on the front for no apparent reason. The bunch was not riding hard and there was a lot of chatting going on amongst, stopping for calls of nature and general mucking about by the riders. Little did they know that a storm had hit Montecassino with heavy rain, strong winds and the consequent carnage that lay in store for them.

Into the last 60 kilometres and Trek thought it was time for a bit of speed as the gap was over 6 minutes, that and no one else was interested in doing anything. Within 10 kilometres the lead had dropped back to below 4 minutes and the rain jackets had to go back on.

In Vairano Scalo with 40 kilometres to the finish line, Katusha with Astana and Omega Pharma – Quick-Step came to the front to stretch the bunch over the slight rise to Tav. San Felice. A further 10 kilometres and the four up front only had two and a half minutes lead and things were working well for a sizeable group hitting the base of the climb in 21.5 kilometres.

After 6 hours of racing the race entered the last 20 K’s and the break could be seen in the distance as they were only 1 minute ahead. Trek were still on the front working for their man Julian Arredondo who they will be hoping does better that his 2nd place yesterday at the summit of Viggiano.

All the leaders moved their riders forward as the break was soon to be swallowed up, at 15K the lead was only 36 seconds and their day in the spot light was nearly over.

12.2 kilometres and the bunch was all together until they hit a very wet section of road and many riders hit the road, some in a very bad state. 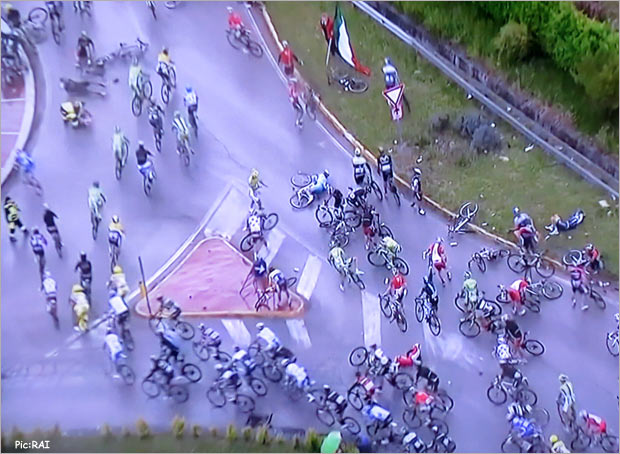 BMC pressed on as a small group of eight including Cadel Evans had a gap at the base of the climb. In the bunch all the other teams put the pressure on to chase them down, whereas up front Oss was leading for Evans who also had Morabito and Durbridge and Santaromita was there for Matthews. In the confusion they had 40 seconds lead as they hit the climb.

Movistar had missed the split and put their men on the front for Quintana, but the other teams could see the danger in the situation and OPQS with Ag2r-La Mondiale were also chasing hard to limit the losses of the leaders. Up the road, Oss and Durbridge had done as much as they could for Matthews and Evans and were quickly dropped leaving just six up front with the gap hovering around 30-40s.

Into the last kilometre and Evans attacked hard as the slope eased slightly taking Matthews, Tim Wellens (Lotto Belisol) and Matteo Rabottini (Neri Sottoli) with him, but Matthews jumped him in the last metres for his stage win in pink. The bunch came in 49 seconds behind Matthews with Wilco Kelderman (Belkin) at the head. 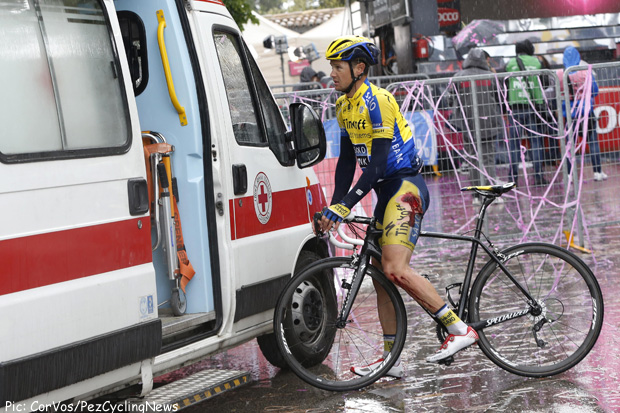 Nico Roche was just one of the GC riders to lose big time – and a lot of skin today.

Evans and Matthews were obviously the main beneficiaries of the crash: Matthews with his stage win and holding his pink jersey for another day, Evans is now sitting in 2nd spot overall at 21 seconds from Matthews and a comfortable lead of over 1 minute over Rigoberto Uran and 2 minutes on Ivan Basso and Nairo Quintana. Joaquim Rodriguez is said to have finished the stage more than 7 minutes down.

Keep it PEZ for all the Giro excitement!