Race Report: French speedster Nacer Bouhanni wins again for F des J, Matthews takes fourth; no change on GC but not the usual ‘boring sprinter stage’ it could well have been with five desperados holding off the posse almost all the way back to the Mexican border – but not quite . . . 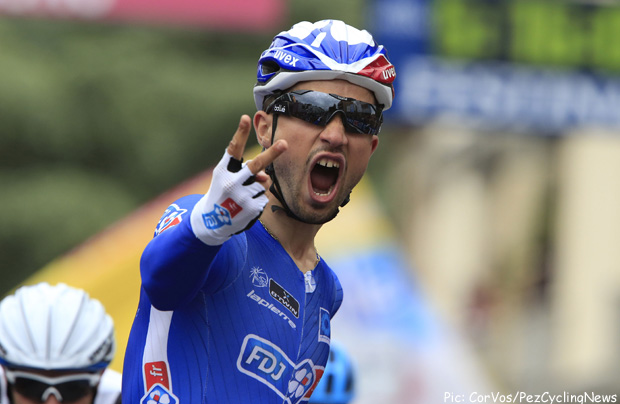 Haas was perhaps the best known with a raft of wins in Australia before he came to the World Tour with Garmin. He also took a Tour of Utah stage in 2012 and a Herald Sun Tour stage earlier this year.

But the man with the most famous name was definitely Thurau; dad ‘Didi’ could do it all, pursuit, team pursuit, stage races, Classics and six days all feature in his palmares. Young Bjorn has a lot to live up to. 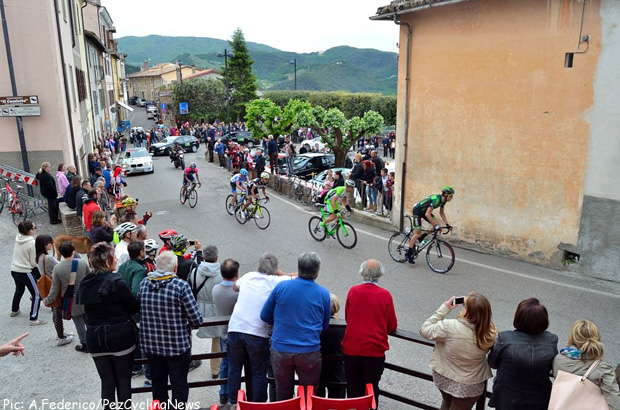 When the lead zoomed out to nine minutes it looked possible it may ‘stick’ but that was as far as it got before Messrs. F des J, on behalf of Bouhanni; Giant on behalf of Veelers and Mezgec; Cannondale on behalf of Viviani; Trek on behalf of Nizollo and GreenEdge on behalf of maglia rosa Matthews began to ride tempo on them.

The classic – if dreaded – ‘sprinters stage.’ 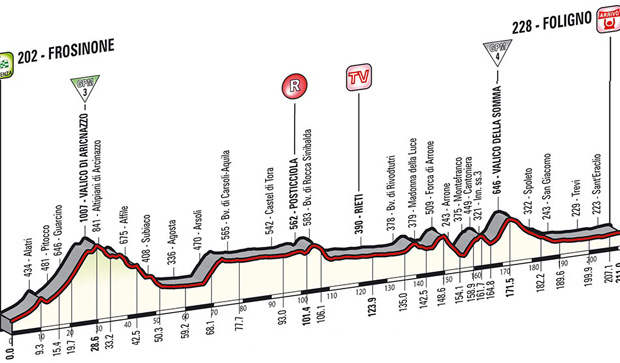 The profile of today’s stage – don’t let those bumps fool you, it’s a classic sprinter’s stage

If I was Dave Duffield I’d tell you what I had for my dinner last night – but I can’t remember. Much more productive to have a look at how our 12 pre-race favourites are doing.

Two have gone; Dan Martin (Garmin & Ireland) as a result of that horrible stage one TTT crash and Joaquim Rodriguez (Katusha & Catalonia) after adding broken bones yesterday on the way to Monte Cassino to those he sustained in the Ardennes. He’s a tough little man – but we all have our limits.

The man who I prematurely buried in last year’s preview, Cadel Evans (BMC & Australia) – but who this year has to be considered a potential winner after his aggressive, confident and smart riding – lies second @ 21 seconds on race leader Michael Matthews and is the yard stick by which the other contenders have to be measured. 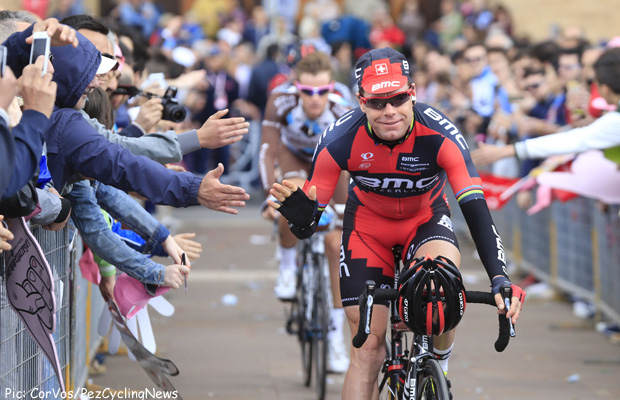 Confident, relaxed and in form. Cadel is looking good.

Rigoberto Uran (QuickStep & Colombia) is in third spot 57 seconds shy of Evans, he’s kept his powder dry (copyright D. Duffield) and despite hitting the deck yesterday is just where he’d like to be. A man who’s ahead of where we expected him to be is Tinkoff’s Polish climber, Rafal Majka who’s in fourth spot @ 1:04; he’ll be happy with that.

Sicilian Fabio Aru (Astana) is 30 seconds back on Evans in eighth spot and confirming our feeling that he’s ‘one to watch’.

Previous winner Ivan Basso (Cannondale & Italy) may be knocking on in years but he’s in 10th spot @ 1:45 and won’t be too disappointed with that. Big race favourite Nairo Quintana (Movistar & Columbia) lies two seconds behind Basso in 11th spot but hasn’t enjoyed the early stages, looking strained yesterday, in particular.

But like a sprinter forgets the pain when he sees the red kite, the little Colombian will be looking forward to those GPM cat. 1 sign boards, tomorrow. Domenico Pozzovivo (AG2R & Italy) is three seconds adrift of Quintana in 14th spot and is another man looking forward to the montagnes.

Trek’s Robert Kiserlovski (Croatia) is handling wearing the team’s number one dossard well, just 13 seconds behind Pozzovivo; but tiny team mate Arredondo – who some were tipping – has dropped a huge 20 minutes. Four seconds behind the Croatian is Astana’s nominated leader, Italian veteran Michele Scarponi – Saturday’s peaks will tell if he retains that mantle or the team place their weight behind Aru. For the last of our ‘tips for the top’ Nico Roche (Ireland), it’s stage wins only from here on in; he’s dropped 15 minutes; but that’s all to the good for Majka and the Tinkoff management – no worries now about who’s the Capo.

Back To The Race
Despite the efforts of the sprinters’ teams mentioned above, over the top of the Valico Della Somma 4th cat climb the break still had almost four minutes with inside 30 K to go – it was possible . . .

The rule of thumb being that a break needs one minute per 10 kilometres to hold off a rampant peloton. But meanwhile ‘back at the ranch,’ the relaxed spelling in the peloton had given way to lots of shiny white teeth on display from F des J, Giant, Cannondale and Trek – with the peloton one long, snaking line behind them.

With 22 K the gap was around three minutes and a cliff hanger was in prospect. Farrar punctures and changes a wheel with a team mate – which made his final top ten placing very impressive.

Up ahead the five ride their TTT nicely as they hit 20 K to go – and it’s still possible. BMC are well to the fore in the peloton; Cadel keeping well out of trouble. F des J, Cannondale and Giant are all desperate now and Lotto have a man up there for Kenny De Haes.

The gap is inside two minutes with ten miles to go and it’s looking like the five can hold on, despite the huge amount of watts burning behind. Thurau’s face tells us that his legs are on fire but he keeps spelling on these flat Umbrian roads. There are 10 K to go as Haas jumps the break, he knows the fire has dimmed and is trying to remind his temporary amigos what they have to do to win.

Five miles and inside a minute as BMC churn the big ones to keep Cadel out of trouble. It’s bunched up a little behind as the five breakaways dig deep – just maybe . . .

But they’re messing around – they have to commit – but they look doomed now as they go under the five to go banner. Giant mass, Mezgec is their man – but Haas isn’t dead yet and again jumps the other four, they bring him back – and it’s ALL OVER.

Durbridge turns on his famed turbo with 2.3 K to go for MM; but it’s all Giant and F des J as they thread through the turns. Bouhanni, Mezgec, Ale Jet, Matthews, Swift, Nizollo – red kite, last corners then it’s a straight drag race.

Mezgec goes, Bouhanni comes off the wheel, Nizollo comes fast but it’s the wiry Frenchman giving us a two finger salute, two stages – the Italian is second and the big Slovenian Mezgec third – Matthews is fourth. 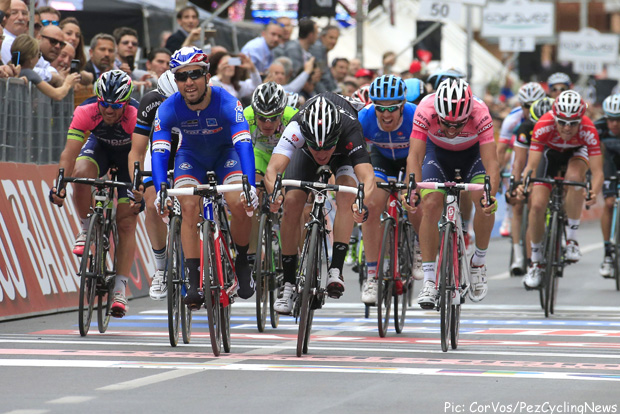 No change on GC but it’s mountains tomorrow – enjoy it Nacer . .