Race Report: Easily the most exciting racing of the 2014 Giro d’Italia so far, Enrico Battaglin emerged victorious from a three-way battle on the steep final slopes to Opora. The GC action behind showed that Pozzovivo and Quintana are still dreaming of pink, but Uran was strong enough to hold the lead. The beginning of the end?

On a day like this an early break should have been pulled back before the final climb for the GC men to fight out for the stage and overall honours, but it wasn’t to be. The big escape went all the way to the line with Enrico Battaglin taking the second successive stage for his Bardiani-CSF team. There was still a battle for the overall, but Quintana and Pozzovivo could only take a small time advantage from Omega Pharma – Quick-Step’s Rigoberto Uran and Cadel Evans. The battle is still on! 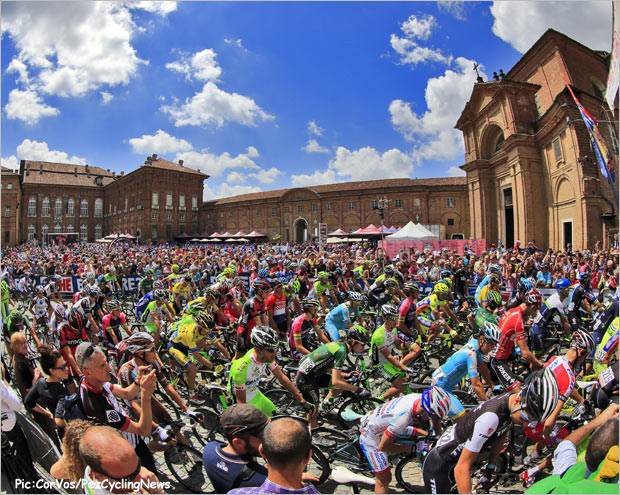 Skies were sunny & winds calm at the roll out from Agliè – a nice change.

Agliè-Oropa (Biella), 164 km
A short but tough old day in the saddle for stage 14. The first climb comes after 27.3 kilometres (La Serra Cat 3), then through some undulating roads to the special sprint at Cossato (62.5 km). The Cat 1 climb of the Alpe Noveis starts after 85.4 kilometres, after they drop of that it’s straight up the Cat 2 Bielmonte which tops out at 1482 metres altitude. After the long descent to Biella (152.3 km) the race tackles the summit finish to Oropa.

The climb to the finish: 11km long, shallow gradients in the first part, to Favaro (km 158.8). Steepest section (approx. 13%), in Favaro, on broad stone paving blocks. The gradient continues at 9% on a series of bends, as far as up to the 130 metre long home stretch, on 6.5m wide pavé of small pebbles. 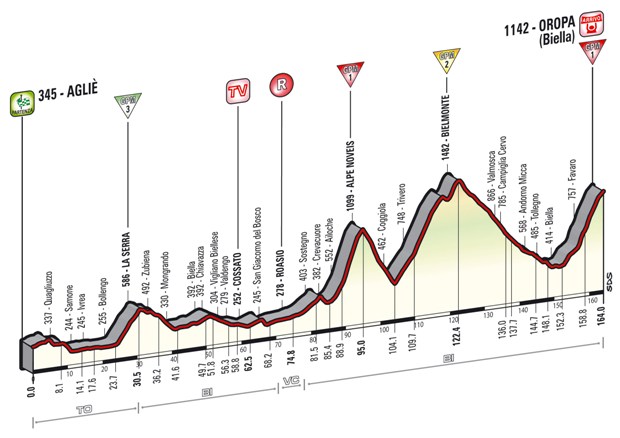 It didn’t take long for a break to head off up the road and by the top of the first climb; Cat 3 La Serra, they had a lead of 4:14 on the Alessandro Petacchi led Omega Pharma – Quick-Step arrow at the front of the pelotón.

Before the top of La Serra; Tim Wellens attacked for the mountain points moving him into 5th place behind KOM leader Julian Arredondo (Trek) with a day of mountains ahead.

The first big crash of the day came with just over 100 kilometres to go, Sky’s Kanstantsin Siutsou was on the ground for a long time and there was also damage to Europcar’s Japanese champion; Yukiya Ashiro‘s Colnago. OPQS slowed the bunch to allow the crash victims to regain the field and the lead went up to over 8 minutes.

The 21 riders were all working well with no one missing a turn, behind; the work was being left to OPQS and they were not anywhere near ‘full gas’.

Coming into the last 80K’s the lead hit its maximum at 10:36, but as the road started to rise towards the Alpe Noveis the gap started to shrink.

The Cat 1 Alpe Noveis
The Alpe Noveis is 9.6 kilometres long with a steep section of 16% in the middle through the village of Ailoche. The temperature had risen sufficiently for the riders to un-zip their jerseys. Trek’s Danilo Hondo was first to be in trouble in the break and was distanced on the severe ramp, but managed to get back on as the gradient eased. Androni Giocattoli’s Marco Frapporti led the break up most of the climb along with Mattia Cattaneo of Lampre-Merida.

At this point the news of the abandonments of Kanstantsin Siutsou (Sky) and stage winner Pieter Weening (Orica-GreenEDGE) came through.

At the top of the Alpe Noveis; Tim Wellens jumped, but this time Yonathan Monsalve (Neri Sottoli) gave him a battle, but the Belgian took full points moving up to 2nd in the KOM. The peloton came across the line at 7:14 with Stage winner Michael Rogers (Tinkoff-Saxo) on the front after Thomas De Gendt and Wouter Poels had piloted Rigoberto Uran most of the way up.

The descent was narrow and twisty and the race organisers warned that the road surface was less than perfect, but all were safe.

The Bielmonte
In the valley town of Coggiola (60 km’s to go) the break was down to about 15 men, but all the dropped riders managed to regain the others as they started the next climb of the Cat 2 Bielmonte. The Bielmonte is longer than the Alpe Noveis at 18.3 kilometres, but not as steep.

Through the village of Trivero about a third of the way up, the peloton was not riding too hard, even Nacer Bouhanni in his red points jersey was still in amongst the GC men. It looked like the legs were getting tired in the break as Wellens was on the front and the others were quite happy to leave him there.

OPQS had taken a back seat in the peloton and Movistar took over with some help from Trek.

The speed picked up in the break as they might have been dreaming of staying away to the finish in Oropa, Hondo and Frapporti were first to lose contact. In the bunch Europcar sent Pierre Rolland and Bjorn Thurau up the road with Riccardo Zoidl (Trek) chasing. Next to go was Ryder Hesjedal and Nathan Haas (Garmin-Sharp); they were joined by Insausti Izaguirre (Movistar).

Thurau, Rolland and Zoidl were eventually caught by Hesjedal and Izaguirre, with Haas struggling after making the pace for his Canadian leader. Omega Pharma – Quick-Step now had to work for Uran as riders like Rolland and Hesjedal could not be ignored.

With 3.5 kilometres to the top, Nico Roche attacked the break as Stefano Pirazzi (Bardiano-CSF) attacked the bunch and crossed to Matteo Rabottini (Neri Sottoli) and Haas to chase the Hesjedal group. 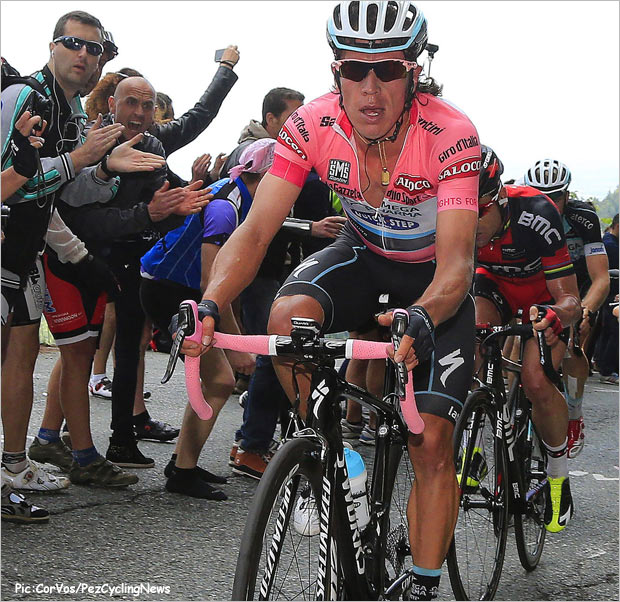 Uran help the pink jersey, but was far from dominant.

The Bielmonte Summit
Roche was first, 8 seconds ahead of Wellens and what was left of the break. The Hesjedal/Rolland group were at 4:25, Pirazzi, Rabbotini and Haas at 5:04 and the pink jersey peloton 5:48 back from Roche. With 30 kilometres to go Roche was still on his own as behind the chasers were hoovering up the dropped riders from the break.

Further down the long descent and the break pulled Roche back to give 15 riders up front and with 20 kilometres to go they had 4:38 on the Rolland/Hesjedal group and 5:48 on the pink jersey. Rolland and Thurau now had team mate Perrig Quemeneur to help in the chase.

Manuel Quinziato (BMC) attacked on the descent, to be joined by Albert Timmer (Giant-Shimano) and they rode hard to take a nice lead to the base of the last climb of the day. 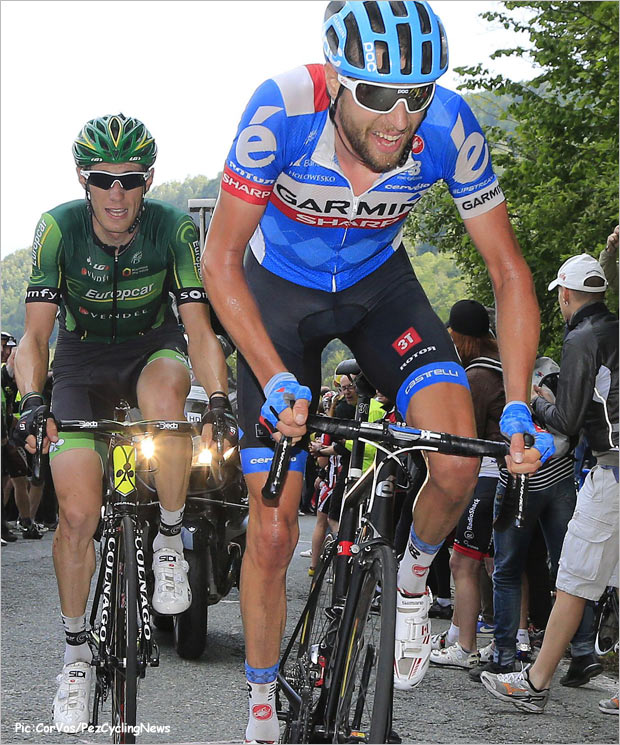 The Final Climb
With 10 kilometres to go Timmer and Quinziato had around 30 seconds on their ex compatriots and then Quinziato had to change bikes and Timmer rode on.

Rolland and Hesjedal only had Zoidl and Izaguirre for company, but the peloton was splitting under the pressure of Trek for Arredondo. Rigoberto Uran and Cadel Evans had no team mates left in the peloton and with the attack of Arredondo; Uran had to do the work and keep his eyes on Pozzovivo and Quintana, both very near the front.

Timmer came through the 5 to go mark with around 40 seconds on Cataldo (Sky) and Cattaneo (Lampre-Merida).

In the bunch Ag2r-La Mondiale took control as they had three riders with Pozzovivo looking comfortable along with Uran, Evans, Quintana and the others hanging on in a group of approximately 10 riders.

First attack came from Pozzovivo with 4K to go; Quintana held his wheel, the other could only watch the little men go. They caught Quintana’s team mate Izaguiri who rode to help take a bigger gap…until he blew. 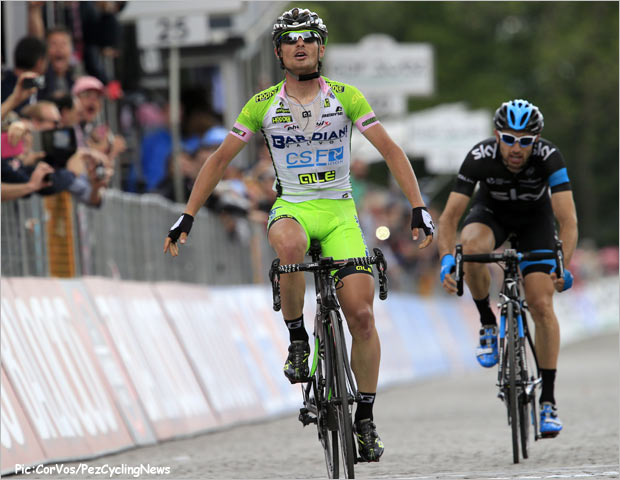 At the front Cataldo with Jarliston Pantano (Colombia) caught the suffering Timmer with 2 kilometres to go. Then Cataldo attacked and he is then counter attacked by Pantano, but Lampre-Merida’s Pole Jan Polanc and (surprisingly) Timmer closed up to them.

Into the last kilometre and Cataldo goes to the front, they hit the cobbles and Pantano jumps and Cataldo closes him down, but Enrico Battaglin (Bardiani-CSF) had crossed to them and was on his wheel. In what looked like a slow-motion sprint Battaglin levelled with Cataldo and then got the better of the Sky Italian for another stage win for his team.

From the GC men Pozzovivo dragged Nairo Quintano to the line for the Colombian to come past him. Uran was in trouble further down the mountain, but he had Poels working to help him. Evans tried to gain a little bit of time, but Poels pushed his wheel across the line ahead of the Australian and Uran only lost a few metres to keep the pink jersey.