Race Report: So far in this Giro the weather has been the biggest adversary, but today the mountains played their rightful part in the proceedings. Colombia nearly had its stage win but Diego Ulissi had other ideas and added another stage to his palmarés. The true 2014 Giro started today!

Trek’s little Colombian Julian Arredondo went with the early break and nearly pulled off the win of his life but the final climb of the Eremo Madonna del Faggio chewed his legs up and spat them out. He was first caught by Pierre Rolland and then the bunch of GC hopefuls swept past them both for Diego Ulissi to take his second stage win of the Giro ’14. Cadel Evans stayed close but he knew he would be in pink tonight as his countryman Michael Matthews was well behind in the ‘grupetto’. 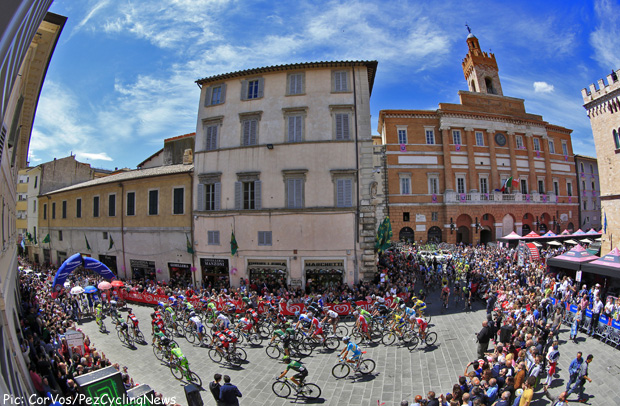 Sunshine in Foligno at the start was a welcome sight

The First ‘Proper’ Day!
At last the long awaited first high mountain stage of the 2014 Giro d’Italia; Foligno to Montecopiolo. 179 kilometres with the first two Cat 1 climbs of the race, the second of them at the finish line, Eremo Madonna del Faggio, in Montecopiolo. It’s a stage of relentless climbing and descending on winding roads and sometimes worn surfaces that includes the Scheggia Pass (60.1 km), the intermediate sprint at Urbania (105.2 km), where the climb begins that leads up to Carpegna and Cippo di Carpegna (Cat 1), with its near-10% average gradient and maximum of 14%. At 143.4 km on the Cippo di Carpegna is the Monumento Pantani. After Maciano there is the Cat 2 Villaggio del Lago on the way up to Montecopiolo, the final climb. After a short downhill section, the climb recommences, with constant changing gradients, at times 10%, at times much shallower. The finish is preceded by a ramp that touches 13%. The finish line lies at Eremo Madonna del Faggio, Montecopiolo (1235m, Cat 1). 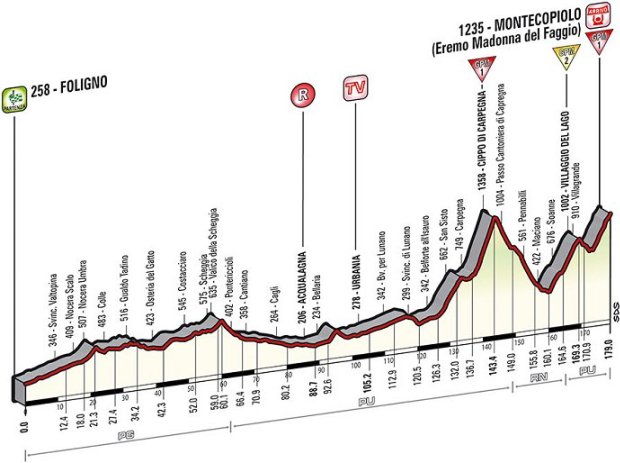 The Race is On!
The race rolled out of Foligno in a temperature of 18ºC, but with the prospect of 12ºC at the finish in Montecopiolo. After the usual flurry of attacks, the break of the day formed after about 25 kilometres. the riders were: Julian Arredondo (Trek), Marco Bandiera (Androni Giocattoli), Julien Bérard (Ag2r-La Mondiale), Edvald Boasson Hagen (Sky), Mattia Cattaneo (Lampre-Merida), Mauro Finetto (Neri Sottoli), Stefano Pirazzi (Bardiani-CSF), Perrig Quemeneur (Europcar), Carlos Quintero (Colombia) and Eduard Vorganov (Katusha).

They soon had a gap of 3 minutes after 30 kilometres, then after 50 kilometres they had 8:30, this turned out to be their maximum lead as from then on the peloton organised its self and began to ride behind. At first Orica-GreenEDGE and then BMC were the only teams working, but eventually OPQS, Tinkoff-Saxo and Movistar all put men on the front.

100 ‘s to Go
Into the last 100 kilometres and the lead was hovering around 8 minutes. At 73.8 kilometres to go; birthday boy Edvald Boasson Hagen of Sky won the intermediate sprint in Urbania and the peloton came through over 6 minutes later. Strange accident to Francesco Chicchi (Neri Sottoli) who suddenly launched himself over the road-side barrier for no apparent reason. It looked worse that it was and he was back up and chasing to regain the bunch after a bit of medical attention.

In the break the best placed rider on overall was Mauro Finetto of Neri Sottoli at 3:28, but with the mountains looming in the distance it was a safe bet that he wouldn’t be fighting for the win. Of the group; Arredondo is probably the best climber, but at 19:50 down he is no worry for the overall.

The leaders hit the foothills of the Cippo di Carpegna in Belforte all’isauro with less than a 5 minute lead over the Orica-GreenEDGE led bunch.

The Road to Carpegna
Stefano Pirazzi started to put the pressure on in the break putting Bandiera in trouble. In the bunch Astana, BMC and Movistar were all riding on the front which was sending the pink jersey of Michael Matthews backwards and out the back to possibly join the ‘Groupeto’ forming with sprinter Nacer Bouhanni who waves good bye to the others.

Pirazzi attacked at the front and was joined by Arredondo and Perrig Quemeneur of Europcar.

Movistar had their complete team on the front which put the final nail in the Matthews coffin; the Australian nearly came to a standstill as the team cars passed.

Through the town of Carpegna, with 6.3 kilometres to go to the summit of the Cippo di Carpegne, the lead for the three (Pirazzi, Arredondo and Quemeneur) was 3:20 and Cadel Evans was virtual pink jersey wearer.

The narrow, steep climb of the Carpegna was causing big problems in the peloton; under the pressure of Movistar for their man Nairo Quintana and Ag2r-La Mondiale for Domenico Pozzovivo the chase group down to 20 or 30 riders. Apart from the pink jersey no other team leaders had been reported to have lost their place.

Pirazzi was keen for the win and made a jump 3 kilometres from the top, Arredondo was quickly on his wheel and the suffering Quemeneur closed. This pre-empted Arredondo’s attack which neither Pirazzi nor Quemeneur could follow.

At the top the little Colombian took maximum Cat 1 mountain points 36 seconds ahead of Pirazzi, who had dropped Quemeneur, at 1:25. Ag2r-La Mondiale pulled what was left of the chasers at 1:57.

On the technical descent Arredondo was maintaining a lead of around 2 minutes on the bunch with Pierre Roland of Europcar (at 1:30) between, after jumping from the chasers. Michael Matthews was reported to be nearly 13 minutes down, so there will be a new pink jersey wearer tonight.

Villaggio del Lago
After the scary descent into Maciano (18.9 kilometres to go); Julian Arredondo was ahead of Boasson Hagen who had dropped like a stone, then a group of Rolland who had caught his team mate Quemeneur, Pirazzi and Carlos Quintana of Colombia.

The bunch still had Ag2r doing the work.

As the small group started the climb they pulled in and dropped Boasson Hagen and then Pirazzi attacked again with only Rolland able to stay with the Italian’s jump. Behind the bunch Astana had two riders trying to help Michele Scarponi back up to the main GC men group after he was dropped earlier.

Arredondo hammered out a steady tempo leading Pirazzi and Rolland by 1:12 and the bunch at 2:40 with 15 kilometres to the line.

Two kilometres further on and Rolland dropped Pirazzi, but the gaps were not changing between Arredondo out front and the others: Rolland at 1:15 and the GC riders group at 2:27.

Arredondo took more points at the top of the Cat 2 Villaggio del Lago (9.5 kms to go) to seal the mountains jersey for the day. Next was Rolland at 55 seconds, then Pirazzi at 1:35 and the peloton at 1:46.

Eremo Madonna del Faggio, Montecopiolo
Onto the final climb and Rolland was trying his best to catch Arredondo as the bunch caught Pirazzi.

The little Colombian entered the tough final 5 kilometres still looking fresh considering he had been out front all day with the break, but the gradient changes in the last kilometres were hurting his short legs and his face was showing the pain.

BMC put Steve Morabito on the front of the peloton to keep the pace high for Cadel Evans on his wheel, with Basso, Pozzovivo, Quintana and Uran close at hand in a group of around fifteen.

2.7 kilometres to go and Pierre Rolland caught Arredondo and immediately had to go to the front. 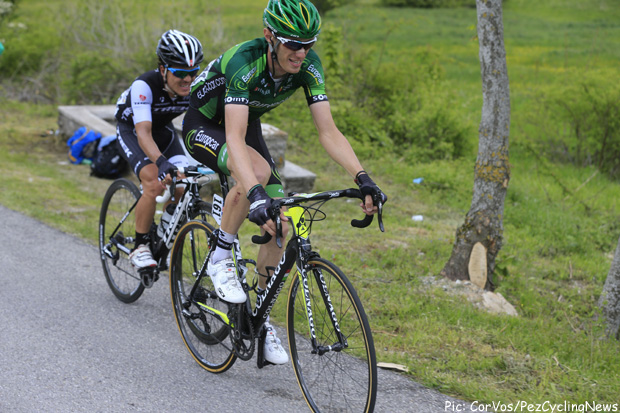 On a steep section at 1.8 kilometres Arredondo could not hold on to Rolland and blew. Mikel Landa of Astana attacked the peloton, but it was too early and he was quickly caught.

Into the last K and Rolland was giving it everything he had to hold off the chase, but an attack from Dani Moreno (Katusha) crossed to him and passed him. Robert Kiserlovski (Trek) was keeping an eye on the action and closed the brave Spaniard down with Diego Ulissi (Lampre-Merida) on his wheel.

Ulissi then jumped round Kiserlovski for his second stage win in this Giro d’Italia with Kiserlovski holding on for second, Wilco Kelderman (Belkin) third, Nairo Quintana (Movistar) fourth and the new pink jersey Cadel Evans (BMC) just behind in fifth. 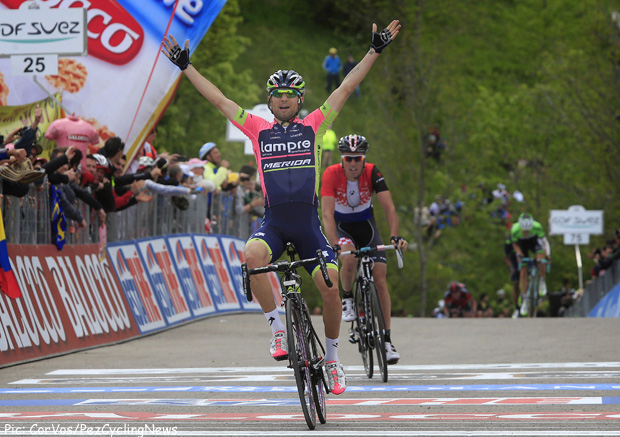 After the finish Cadel Evans told RAI SportTV; “It’s been a difficult Giro so far, not with mountains and time trials but with other problems. Morabito was my man today; there were a lot of tired legs there today, not from today’s stage but from what has been before.”

I think you can say the 2014 Giro d’Italia has at last started. Stay tuned to PEZ for all the action. 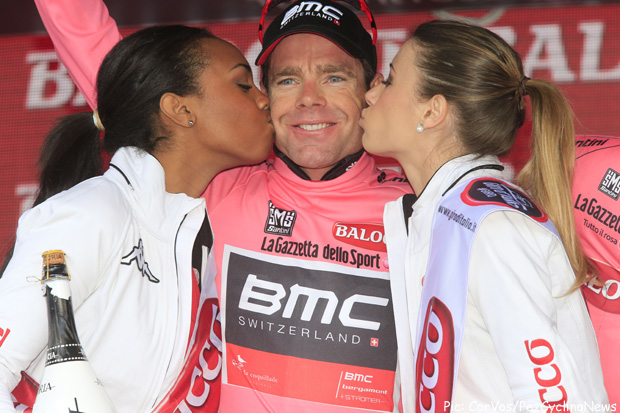 Third time lucky in pink for Cadel? He first wore the jersey back in ’02 and then again in 2010. Can he hold on to it this time?