Great Head: The Limar Ultralight Plus

Modern road bike helmets don’t have nearly the age old roots that a lot of other bike parts do. In fact it wasn’t until the 90’s that we actually had an example of a road cycling helmet that gave riders any sort of effective head protection. Before that, it required the dumb luck of hitting your head in just the right spot so that the strips of poorly padded leather we used to call helmets could actually function as protection. And of course that only mattered for those of us that wore a helmet at all…

Cycling head protection changed fundamentally in 1990 when Limar produced the Primo model using a thermo formed shell and EPS foam. It was bulky by most standards, but it gave them a very good foundation of info, and it represented one of the first examples of a helmet made to spread and slow impact forces in a crash (while not simply bursting into mini snow storm on impact).

That tech was refined over a couple of years to the point that Limar introduced its first road race worthy helmet in 94’… I remember watching the Tour of Flanders and, as I’m a geek, I remembered wanting that one different helmet among a flock of leatherheads. And that was before Bugno beat Johan to the line. (I’ll let you speculate if Limar was also the first “aero” road helmet and might have helped him as he went from a LOOONG way out to win by an inch)

The F104 wasn’t nearly as bulky and heavy as the first few foam only or foam with shell wrapped lids, and it was still a massive improvement in head protection. And it actually featured a little ventilation and a bit of an Aero shape… But most importantly, for people like me, they were the early adopters of Polyethylene for shells which meant IT CAME IN TEAM COLORS!

Limar’s roots go back a long way as part of Italian firm MPE. MPE were originally involved with moto helmets until their Managing Director decided to create Limar with a fully cycling focus. While the focus shifted, their access to some of the best foam and shell technology available was, and still is the innovative base that’s helped Limar create a chain of the lightest performance helmets in cycling over the past several years. The latest link in that chain is the new Ultralight Plus. 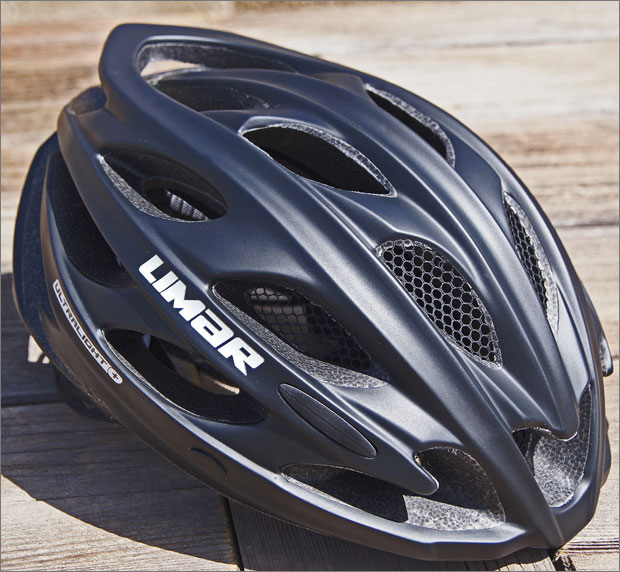 Limar understand the foam that is the key to cycling helmets very well.

While the first several helmets with shells were made in two pieces and bonded together, Limar created the in-mold process used by most top line helmets now, where the fairly complex internal foam structure is molded directly to the shell. The process creates a much more solid unit than using adhesives to bond the two pieces together.

The EPS (Expanded Polystyrene) material is also the key to the helmet passing CPSC and DOT safety standards while not needing an internal skeleton found in other helmets. The advanced foam and the lack of a Skeleton helps deliver Limar’s very low weight.

The unit sent to us was under spec at 208 grams. 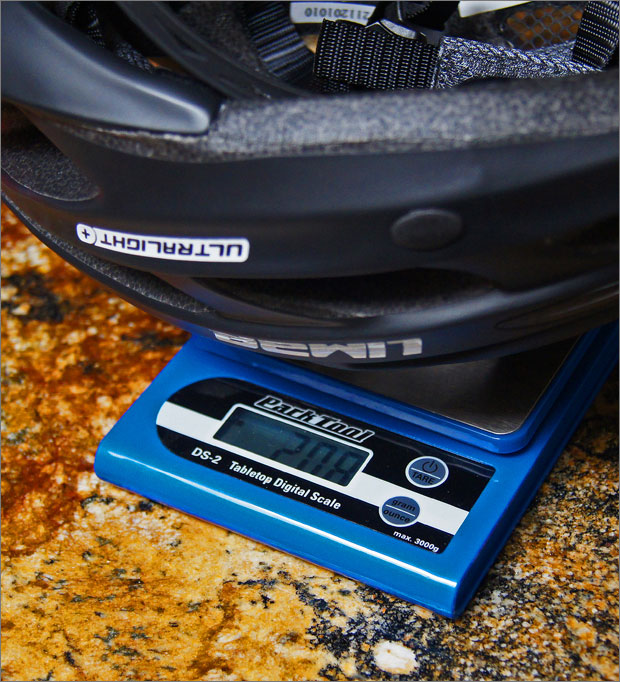 As a testament to their production consistency, Limar are a pinnacle brand in Australia. That might sound like an odd fact, but Australia is a damn tough market for helmet manufacturers because the AS testing standard requires continued testing of each batch of helmets delivered into the country. Other countries require only a batch of helmets to pass at the start of a product’s life and that batch may not be representative of the quality of production later in a lifecycle…

Limar’s relationship with MPE has also benefited their products long term durability. With their manufacturing foam products used not just for cycling helmets but also for things like automotive structural products, insulating storage products and military applications, the foam is produced not just to dissipate impact but to hold up a bit better outside and in use. While some companies are using foam types as a cost saving part of production and building to meet a minimum passable spec, Limar continue to push with EPS technology. With that, while some makers suggest helmets be replaced every 2-3 years, Limar suggest you hunt a new lid after 4 to 5 years under “quite a bit” of use. They back the helmets with full 3 year crash replacement (you must register the helmet at purchase and you pay half of current MSRP on return of the damaged helmet).

Here’s wishing more of the top line Ultralight Bike parts were built to a specification that also gave it a 30-60+% bump in longevity / durability.

Back to the UL+, there are a few points that seem similar to the last model Ultralight… 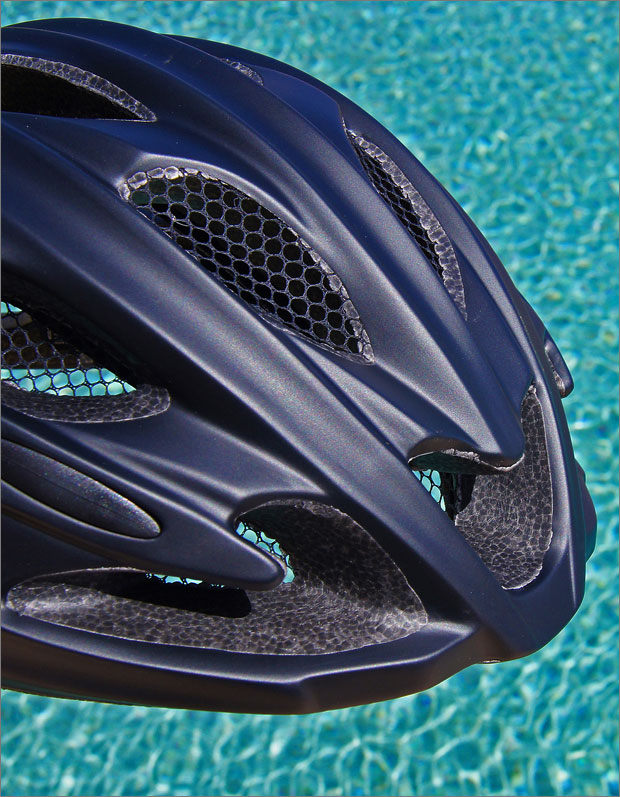 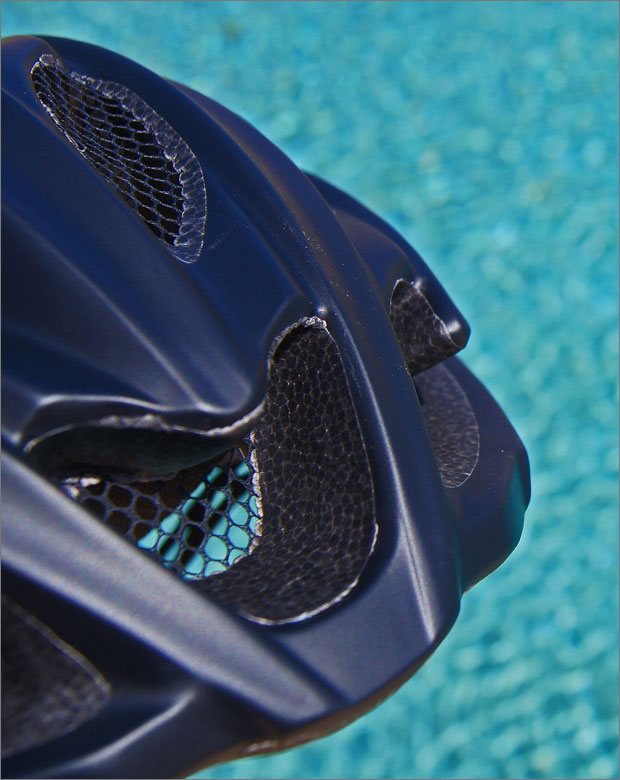 Limar changed the rear in a bit more notable fashion.

While the old Ultralight was a smooth and very low profile unit, The UL+ gets the addition of a bit of a pronounced rear spoiler. 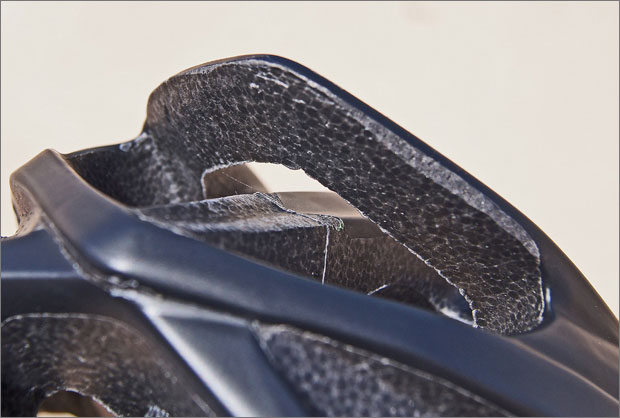 This bit of a duck-tail serves to create a little pressure and act to draw air out of the improved venting at the top-rear of the helmet. It winds up working better along with an adjusted rear venting pattern. 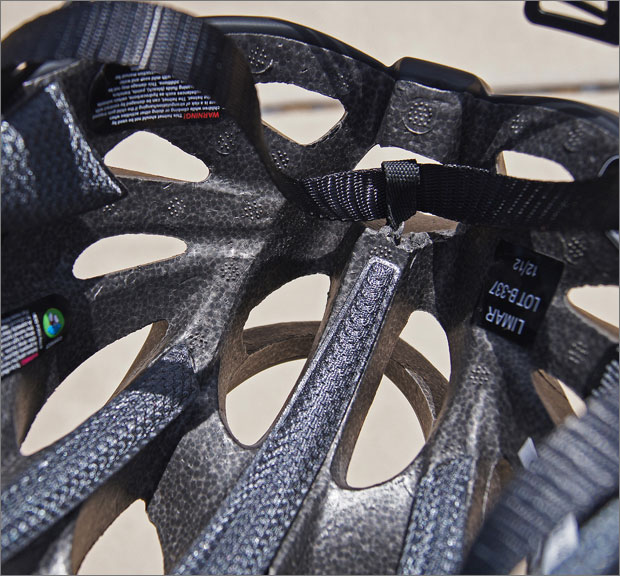 The greater channel pattern is pretty similar to the older lid, running straight front to rear channels with medium depth and no cross over channeling between the four main pathways. 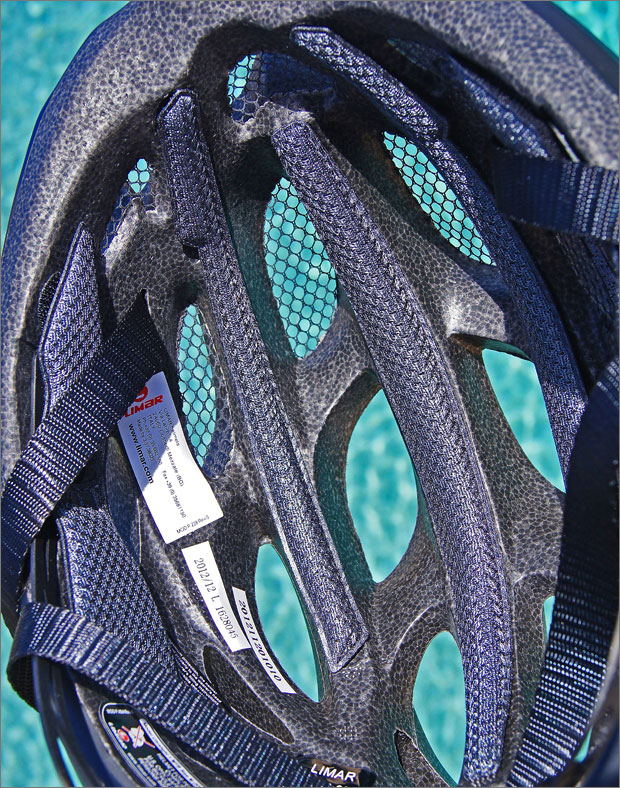 The helmet channeling and padding combine for a little less contact with your head and that added space combines with the rear spoiler to move more air across your head than the older model. 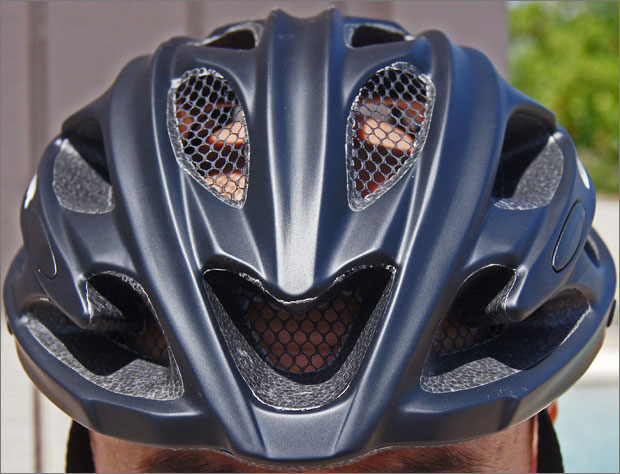 This helmet also produces a little more wind noise than the last model. It’s not loud at all. Both it and the older Ultralight are still quiet relative to other top line helmets from several manufacturers.

At days end, wind noise likely has a pretty direct relationship to wind drag and I would venture a guess that this helmet is also relatively low drag. The trade-off for low drag and low wind noise though is ventilation at high temps that lags a bit behind other top line helmets like Giro’s Aeon / Specialized Prevail and Lazer’s Helium. But these helmets are both heavier and create more wind noise. All of these are good helmets though and it’s likely going to come down to personal preferences and potentially fitting…

The Ultralight Plus has a pretty neutral shape and fitment is very easy with Limar’s Ultrafit + retention set up. 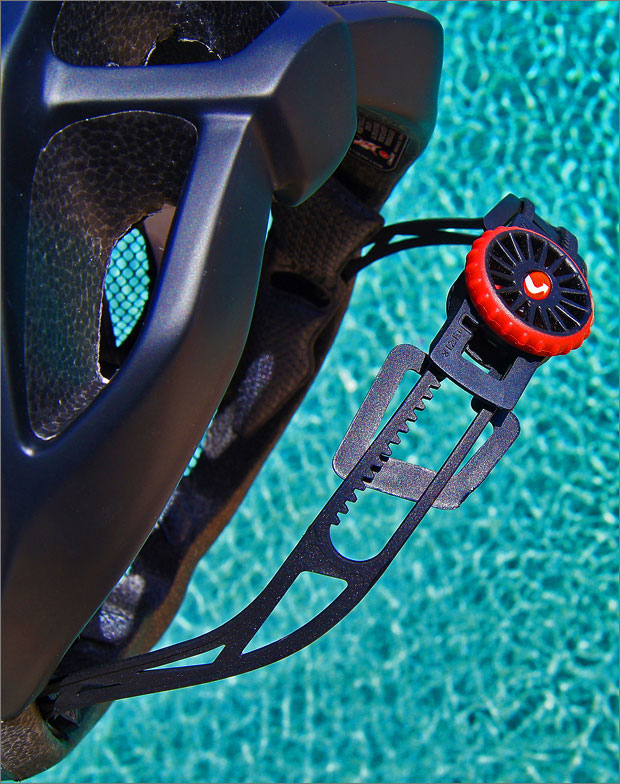 Turn the dial one way to tighten and one way to loosen and that’s it. It’s a big enough dial that you can adjust it with virtually any cycling glove and it stayed in place without any “ghost adjustments”.

The adjustment indexing is also pretty fluid and the indexing ratio is pretty close / small, meaning that you can get a pretty fine-tuned fit. 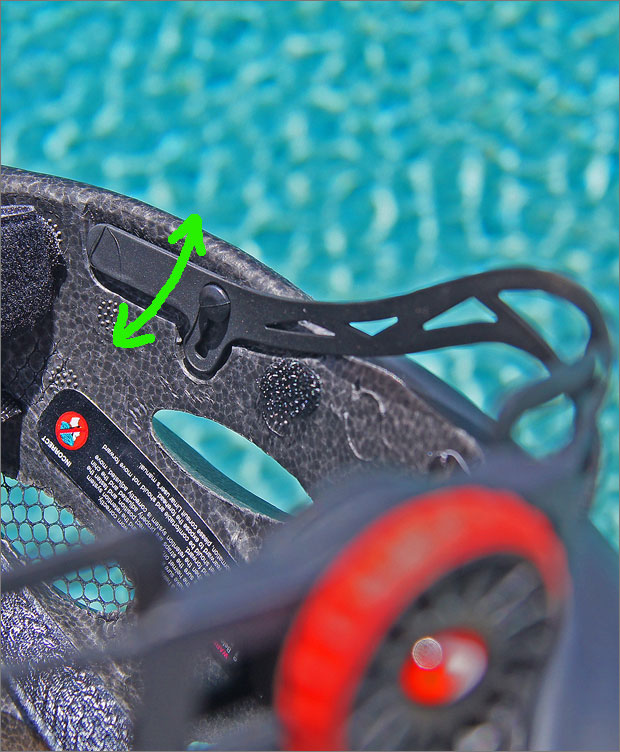 There are 3 indexed clicks (4 positions) of adjustability here for about 2 ½ inches of movement but the rear strap is also pretty malleable and you’ll find another half inch or so of comfortable flex in either direction.

It is a simple, easily / highly adjustable set up.

The straps are pretty standard for most of today’s top end lids. They’re thin, soft light and pretty basic to clamp and adjust. 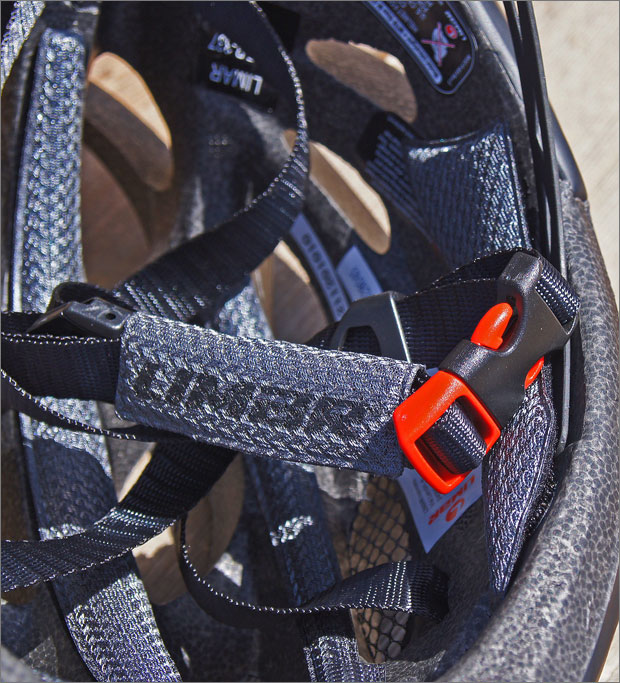 One thing I like for helmets to have is a Free floating strap at the rear of the helmet. 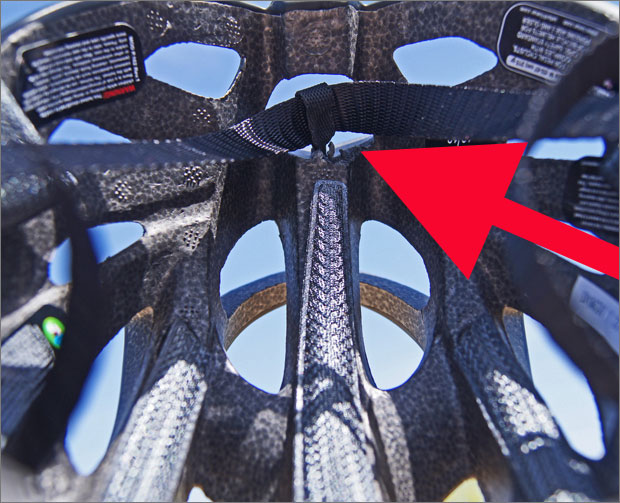 It makes finding an initial set up a lot quicker and easier and I think it helps the straps settle in for a better all around fit.

The internal padding strips are similar density to most all high end products. 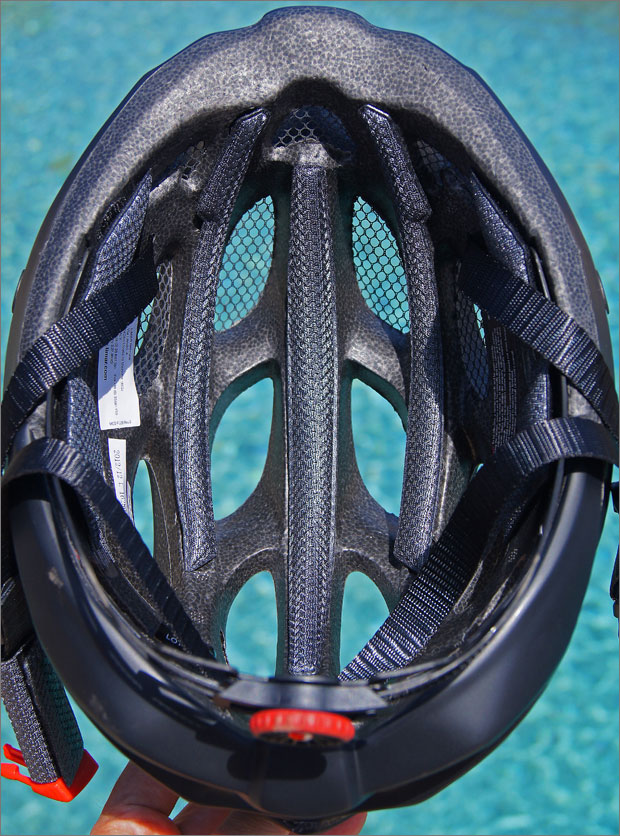 And like most high end helmets, the weave handles moisture well and has antibacterial fiber… 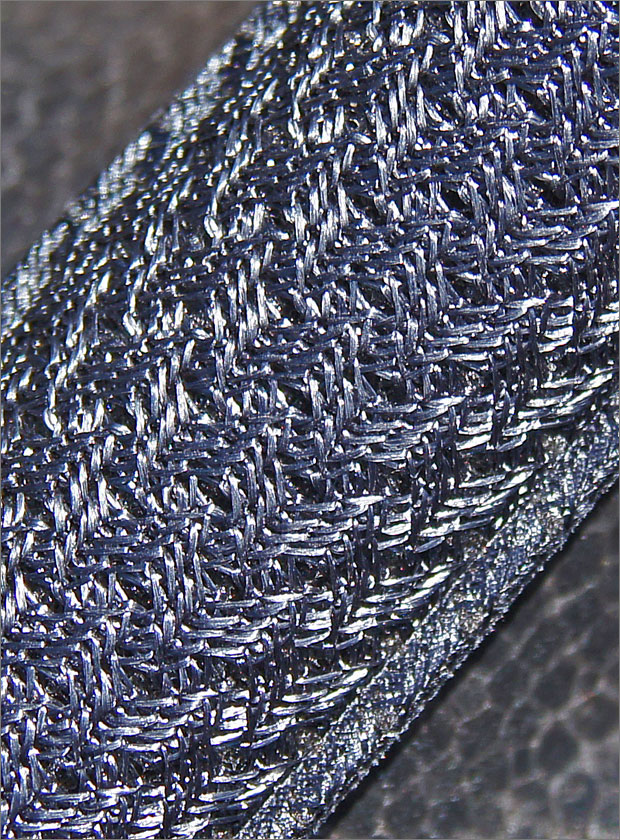 The Ultralight Plus also ships with a visor…. 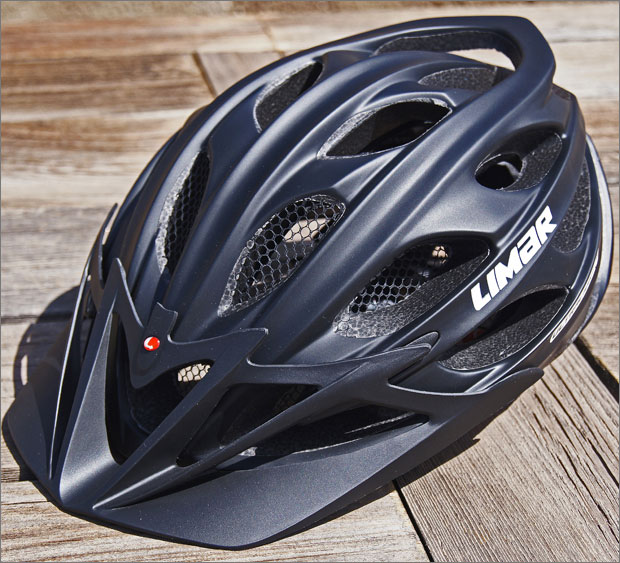 It’s a pretty simple unit that connects via two in-molded snaps that will take the two cover pins easily once you’ve removed and tossed the visor. If you need to, reinstalling the visor is a couple of simple snaps away.

One feature that I wish more companies would include is a bee screen on the front vents. 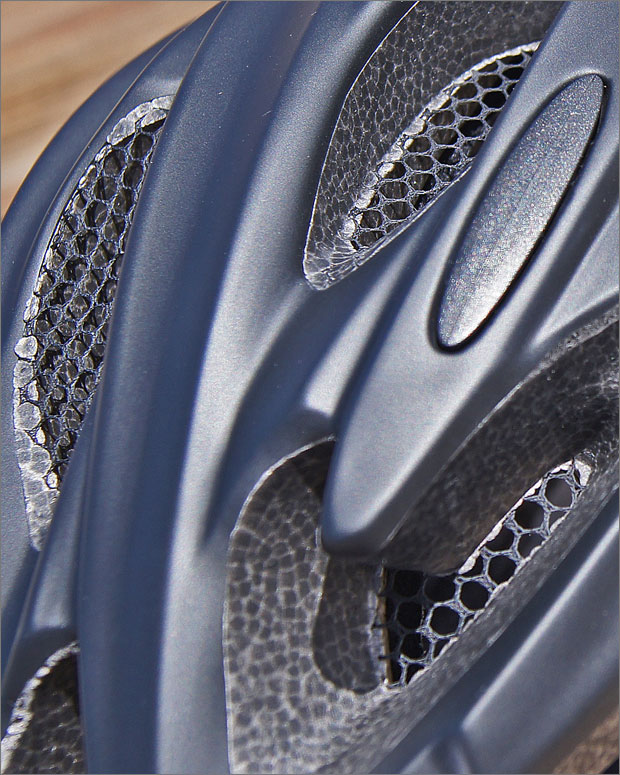 It’s a cost and requires some pre foam work to hold properly in place, but as I get head stung about once a year, I’d really rather appreciate the addition as it does virtually nothing to prevent air flow and stops anything worth stopping from blasting your bean.

That Limar can make something this secure at this weight is quite simply down to the foam tech that’s at the company’s foundation.

On the road, this helmet is notably light on your head. There are a couple of helmets that get close to this weight as well and the saved grams can really add up to less fatigue over longer rides.

The improved ventilation is a real plus as Limar have always made good looking helmets but they haven’t always suited me here in Arizona. The older Ultralight was adequate. The UL+ is good enough that I’ll grab it into Late June here in Phoenix, which means rides will start in the 80 degree F range and end in the high 90’s and low 100’s. That’s very likely hotter than the hottest conditions for most normal people.

Shape wise, this helmet shell is on the neutral to oval side. Limar make their other high end road lid (the 777) in a bit more round profile. With these two helmets Limar feel like they have a couple of offerings that will suit a pretty broad range of sizes (while making retailers fairly happy as they don’t have to carry a lot of inventory…).

One question that I’ve been asked a few times is “why does Limar increase the weight of the US helmets versus European models when other companies build to one low weight?” That’s a bit of a trick question as most helmets are made to the heavier standard to serve both US and Euro testing. Limar don’t make the US model heavier, they simply take the extra step of another production run of lighter helmets that meet Euro safety standards. The ability to do this is again in part down to their full understanding of EPS…

The Ultralight Plus is available now and retails for $174.99. Quickie note that the 777 is their second from the top lid, also dang light at 225 grams (Med) for the US market and priced at just $99.

If you’re looking for these, you can visit Limar’s web site and for North America, you can also connect with the guys at Albabici for dealer and retailer information.