Race preview: Saturday’s 69th edition of the Omloop Het Nieuwsblad signals the start of the Classics series as the best in the world take on this semi-classic on the famous Flanders cobbles. Ed Hood will be there roadside this weekend but before he flew out he checks in with a full preview of the action ahead.

Viktor, PEZ’s resident cycling soothsayer and my mentor has decided that we have to be less haphazard in selecting the races we visit and should go down the Team Sky ‘box ticking’ road.

Now, let’s see, first of all there should be no: pictures of riders with cute baby kangaroos, riders topping up sun tans, six star hotels or parcours which look like construction sites – check.

But there should be: constant risk of hypothermia for riders and fans, hellish cobbles, preposterously steep but short climbs, mad spectators and plentiful roadside purveyors of alcoholic beverages; and these must have the latest plasma screen television technology available – check. 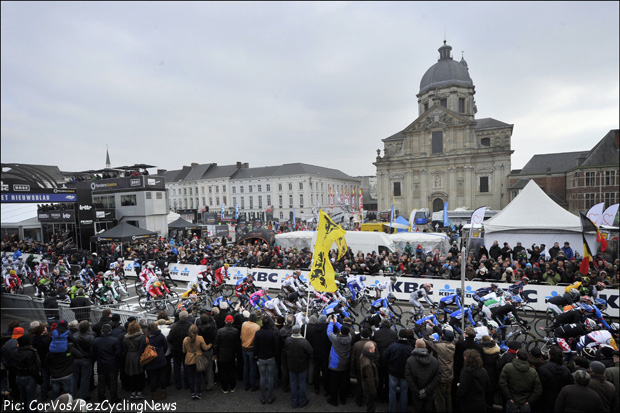 The center of Gent – where many purists say the ‘real’ season kicks off.

This is where it really begins; whilst I realise that it’s a big world out there and bike racing is exploring it, this is Heartland. It’s in the soil and in the Media 365 days each year, it matters all the time and not just when Cav, Frommey or Wiggo win something or the next Lance revelations break.

The Grand Tours could end tomorrow and it wouldn’t make one iota of difference in Flanders – the ‘cross, Gent Six, kermises, semi-classics and classics would march on. Het Nieuwsblad, formerly Het Volk and known locally as Gent-Gent is the real deal, 200 kilometres on a diabolic parcours with everything from virtual cart tracks to dual carriageway generally with an icy wind scything in from the Ukraine if you’re lucky – and the North Sea if you’re not.

Then there are the bergs, nasty, narrow and often cobbled and too impatient to zig or zag they simply take the straightest – and inevitably steepest – route up from the flatlands to the top of the hog’s back ridge of the Flemish Ardennes which broods above the town of Oudenaarde. Geographically it’s not a huge area but there’s a network of ancient tiny roads which the organisers exploit to give multiple ascents and descents, most within a few kilometres of each other.

There’s the Leberg, Hostellerie, Muur at Gerardsbergen, Valkenberg, Taaienberg, Eikenberg, Wolvenberg, Molenberg and Kruisberg. And it’s not just the bergs which have names straight from a Tolkien fable, the cobbled stretches have similarly evil titles; Haaghoek, Paddestraat and Lange Munte. 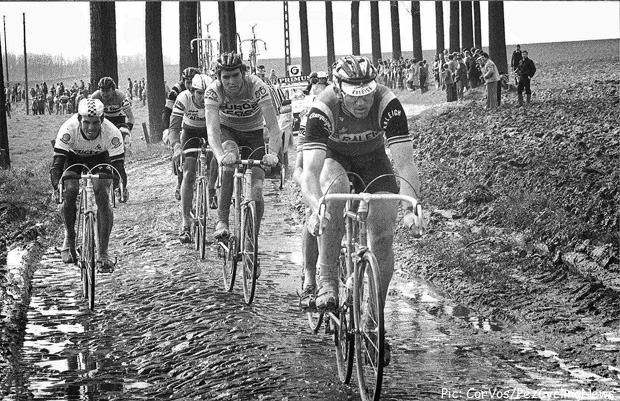 It’s a race which has real history, not stretching back to the Dupont Tour in the 90’s but to the Second World War – the first edition was held in 1945 and six day legend Patrick Sercu’s dad won it in 1947. And no, Dave, Vik and I weren’t there for that one.

The Record Men on three apiece are Ernest Sterckx – before my time, too – Jos Bruyere, Eddy Merckx’s giant and hard as nails right hand man; and the man who needs to shave three time a day, Peter Van Petegem, ‘De Peet’ as he’s known in these parts. 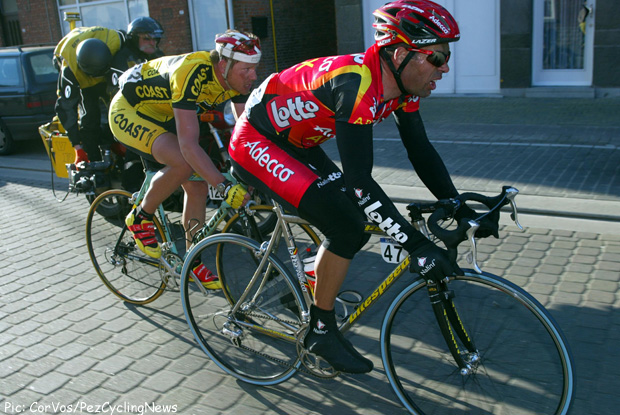 ‘De Peet’ is now on the race organisation and is a cheerier soul than he used to be when a ‘renner’ – Vik and I once passed him in our hire car whilst he was out training. We gave him a shout and received a nod and a grunt in return – most Belgians we tell this story to reckon we did very well to get that acknowledgement.

All three men are Belgian, with the home nation having won the race 54 times and the Dutch and Italians in second spot on four wins apiece that says much about the toughness of the race and it’s importance to the home teams. It’s not Roubaix or Flanders, but it is a race which all the Belgian Greats covet – Van Springel, Roger De Vlaeminck, Verbeeck, Merckx, Maertens, Planckaert, Vandenbroucke are all on the roll of honour.

But due to the fact that it’s 90 minutes short of full Classic distance there are more riders with the potential to win; as Gent-Wevelgem winner Barry Hoban says; ‘it’s a different race when you go over 200 K.’ 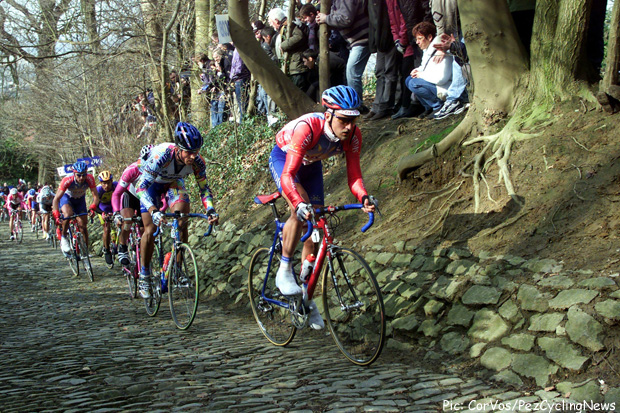 The other factor which opens the race up to riders just below the very top is that the behemoths of the peloton are three weeks shy of when they want to peak – far to the south on the Ligurian Riviera for Milano-Sanremo. This edition of Het Nieuwsblad sees five previous winners line up, 2005 Nick Nuyens (Belgium & Garmin), 2009 Thor Hushovd (Norway & BMC), 2011 Sebastian Langeveld (Netherlands & Garmin), 2012 Sep Vanmarcke (Belgium & Belkin) and 2013 Luca Paolini (Italy & Katusha).

The chances of a repeat win for Nuyens, Hushovd, Langeveld and Paolini are slim but Vanmarcke could well be in the mix. Which brings us onto; ‘who’s gonna win?’

Well, just for a moment let’s imagine that a team other than QuickStep is going to win.

Vanmarcke has a good team around him at Belkin and has the knowledge and motivation which you need to tame this hellish course. Russia’s Katusha have last year’s winner in numbingly cold conditions in Paolini – but a better bet for them is Norwegian, Alex Kristoff. Last season he was top ten in Milano-Sanremo, Flanders, the Scheldeprijs and Roubaix and he already has a win in 2014. 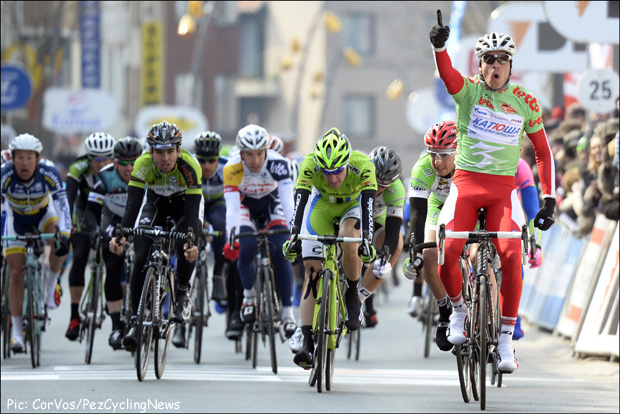 Mega budget Suisse equipe BMC have past winner Hushovd but home boy Greg Van Avermaet is a better bet; he was fifth last year and in the thick of the action in all the cobbled Classics.

The other Suisse squad, pro continental IAM have the classy duo of Aussie Heinrich Haussler and and French TT Champion, Sylvain Chavanel – both men who aren’t scared of cold weather and cobbles. Neither would be a shock winner.

And a man who positively revels in Arctic conditions such as those the Primavera served up last year – to such an extent that he took the flowers in the city which is famous for them – Germany’s Gerald Ciolek is backed by another pro conti squad, MTN-Qhubeka. They punch above their weight and are never overawed by their World Tour brothers.

And whilst on the subject of pro conti, those Vlaanderen boys always turn it on here on home turf – Sven Vandousselaere was on the podium here last year and former u23 Ronde winner Kenneth Van Bilsen won the Marseillaise to give then a great start to 2014. Watch for them.

Garmin have Nick Nuyens who won here in 2005 then at Kuurne a year later but then had limp years – due in no small measure to bad crashes – until 2011 when he came back to surprise everyone (except us) and take De Ronde. We can’t see another Lazarus job here and neither do we think that their 2011 winner, Sebastian Langeveld can pull it off again. Former Kiwi National Champion, Jack Bauer is a much better bet for the SatNav boys.

Sky’s best hopes are Norseman Edvald Boasson Hagen, a Gent-Wevelgem winner in 2009, don’t forget – and Englishman, Ian Stannard. Stannard was on the podium of an apocalyptic Kuurne in 2010 behind harder than hard Bobby Traksel and was man of the match in the Primavera, last year – he’s due to land a ‘biggie.’

But we can avoid them no longer – QuickStep.

The message from Qatar was clear; ‘Boonen’s back!’ His morale is sky high and this race is the next milestone on the way to De Ronde and Roubaix. He’ll ride hard but it won’t break his heart if he doesn’t win as long as the sensations in his legs are good. And as long as Qatar GC winner, Dutchman Niki Terpstra or Czech World Cyclo Champion, Zdenek Stybar top the podium for the team, Tom will be happy. 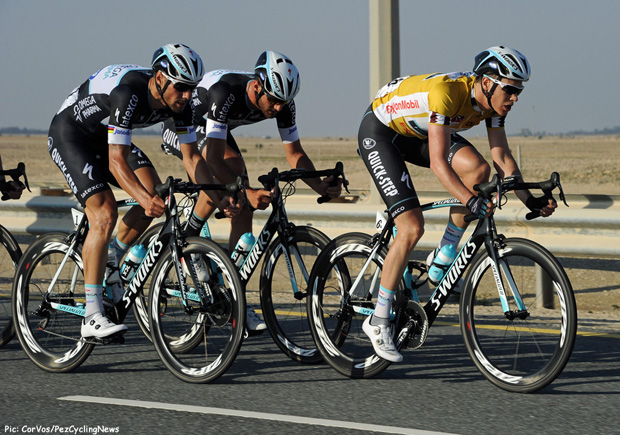 PEZ will be there, hung over, no doubt, but there nonetheless, with camera and notebook in hand to give you the inside story.