Race report: The Spanish pocket rocket Joaquim Rodriguez took a very popular victory at 2013 Giro di Lombardia, for the second year in a row sloshing through the downpour to finish the season on a high. He held off Alejandro Valverde to drive a stake through the hearts of at least some of last week’s world championship nightmares.

Rodriguez kept his powder dry in the dank gloom of the Italian north and made his move when it counted, just as the nastiest section of the Villa Vergano sliced at season-shattered legs. Then it was a case of taking just enough of a risk to stay upright on the drop to the finish line.

Last week it was tears of despair and frustration; this Sunday, it was a million-watt smile that beamed from the podium. 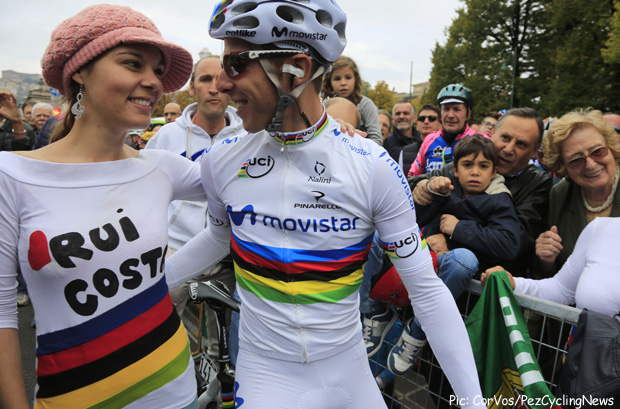 New World Champ, Rui Costa was a popular man at the startline.

How It Happened
Here’s how things panned out as the peloton meandered out of Bergamo. There’s a bit of a “school’s out” vibe by the look of it; nothing happened for the first 30 kilometers or so, no breakaways.

Eventually, a quartet says: “See ya!” They are Serge Pauwels (Omega Pharma-QuickStep), Gorka Izagirre (Euskaltel), Jay Thomson (MTN Qubheka) and Colombia’s Carlos Quintero. On the Valico di Valcava, it’s all change and only Quintero survives from the initial escape as he’s briefly joined by five others. The peloton is not much over a minute back, so they’re doomed anyway. But Peter Sagan won’t be dealing the coup de grace; he’s already bailed out. Now we’ve got Quintero, Hollenstein (IAM), De Marchi (Cannondale) and Wouters (Vacansoleil-DCM) as the Colle Brianza looms.

Then it’s back together as the peloton speeds up in the approach to the Muro di Surmano. They hit the climb and a break of twenty-one has started to fall apart. Hollenstein and De Amrchi have survived, and are joined by the likes of Nicolas Roche (Saxo-Tinkoff). Vincenzo Nibali crashes, not for the first time, and the Giro winner is out of the race. Andy Schleck is also out … which is possibly less of a surprise given his season.

Orica-GreenEdge do a power of work to close the gap and it’s altogether on the climb; then Saxo-Tinkoff take over.

On the descent, Valverde and Quintana (Movistar) get a gap; their team-mate (and new world champion) Rui Costa is one of those dropped. The mist starts to wreath the landscape, and there’s no illusion that fall is here. Gasparotto (Astana), Caruso (Katusha) and Santaromita (BMC) get up to the leaders, and then Voeckler joins the club.

47kms left and Voeckler, dancing on the slopes, has two-and-a-half minutes of a lead. Katusha have a couple of riders on the front of the chase. Four o’ clock, Euro time, and Voeckler crests the summit of the Madonna del Ghisallo as the church bells peel and the fans scream from underneath their umbrellas. 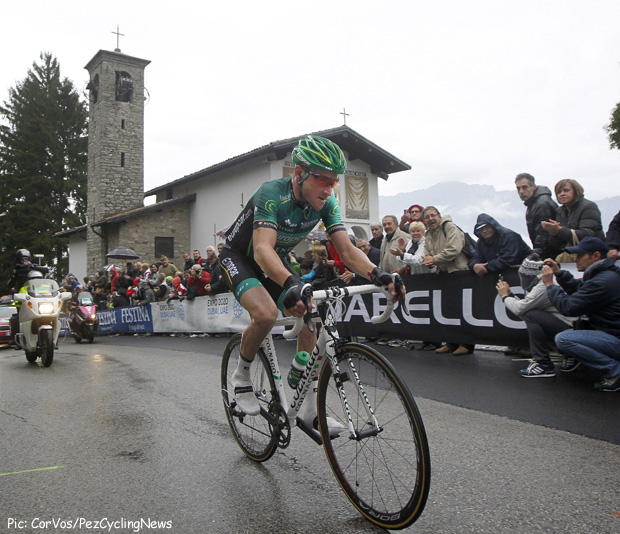 37 to go and Voeckler is bouncing around on his pedals, over three minutes for the loved-by-the-fans, tolerated-by-some-in-the-peloton Frenchman. It’s still raining, but not as heavy as it has been.

The chase is strung out on the lakeside now, 27 kilometers from Lecco, and it starts to split up. Rui Costa’s instantly recognisable world champ’s kit, is working his ass off in the chase. They’ve got work to do – still 2’40” for Voeckler.

The Frenchman gives his leg a rub as he flies along; middle-aged fans hang over the crash barrier and cheer him as he slugs an energy gel. The field sweeps along the shores of the lake and suddenly there’s yet another spill on the slick roads. Marcel Wyss (IAM) on the deck for the third time today, along with Pozzovivo (Ag2r).

Inside 23 to race, Voeckler emerges out of a road tunnel and what’s left of the daylight isn’t much brighter. Tommy has his forearms draped over the bars as he ploughs on, a lonely fragile presence as the mountains loom above him. The Frenchman is now rocking in the saddle, forcing the pedals round, trying to keep the bike spearing along while avoiding the super slick road paint.

Seventeen to go now as the final climb approaches: Voeckler’s gap now appears to have plunged to around 1′ 20”.

Rogers (Saxo-Tinkoff) and Caruso (Katusha) are rotating the effort on the front of the chase; a shirt-shredded Giovanni Visconti (Movistar) is up there, too, after a painful visit to the tarmac clinic earlier in the race.

14.7kms to go, and the gap is exactly a minute as Rui Costa sits up, job done for the day. It’s all coming back together; Voeckler is out of the saddle, but the bunched peloton is reeling him in like a trophy fisherman on his ostentatious status symbol yacht.

The Villa Vergano is the last climb, 12.2 kms left, as Movistar continue to lead the pursuit of Voeckler. The Frenchman has a bloody chin; did he tumble when he was in one of the tunnels?

Cherel (Ag2r) leads what’s left of the peloton past Voeckler. The big names still in contention are Rodriguez (Katusha), Quintana and Valverde (Movistar)

Thibaut Pinot (FDJ) jumps and Pozzovivo (Ag2r) goes with him. Basso (Cannondale) pulls it back. Pozzovivo and Quintana jump and Basso stamps on the gas to close it up again.

Pozzovivo has another go and there’s a wee gap as Basso struggles to close it again. Seven riders start to stretch it away – Pozzovivo, Rodriguez, Dan Martin, Valverde, Basso, Majka.

Now Rodriguez jumps as the gradient hits 15%. The little Spaniard looks like he’s being flogged, his face contorts in agony as the fans heap praise on his ascent. Purito has his hands on the brake hoods, legs whirring as fast as he can muster.

It’s Valverde, Dan Martin and Majka chasing as the riders hit the summit in the mist. Rodriguez is descending now as the clock tick past six hours of racing. Seven kilometers to go for ‘Purito’ Rodriguez but he’s only got eight seconds. No-one is taking massive chances as the road surface is like ice, rain water on slick tarmac.

The little Spaniard chases a race official’s car through the gloom. Valverde’s got a little gap on Martin and Majka who are following gingerly. It’s last week world championships (almost) all over again as Rodriguez is clear and Valverde is hovering behind. Rodriguez flashes through the left of a roundabout as the road flattens out. 2.5kms to go.

The police outriders’ lights strobe and spear through the late afternoon gloom. Two kilometers left for Rodriguez on a neat Spanish champion’s red-and-yellow paint job Canyon frame. Inside the last kilometer, Rodriguez has it. He just needs to stay upright, totters like a toddler round the last corners and smiles. A repeat Lombardia win, and he retains his world’s number one ranking. 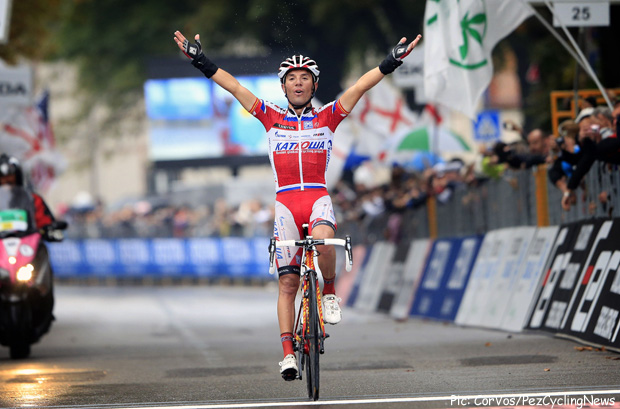 A fabulous ride, and a win taken in decisive fashion. Valverde stays clear for second, and Rafal Majka is away for third as Martin has a tumble. Pozzovivo also has a spectacular wipe-out as he loses it when he hits the sponsors’ logos on the finish line. 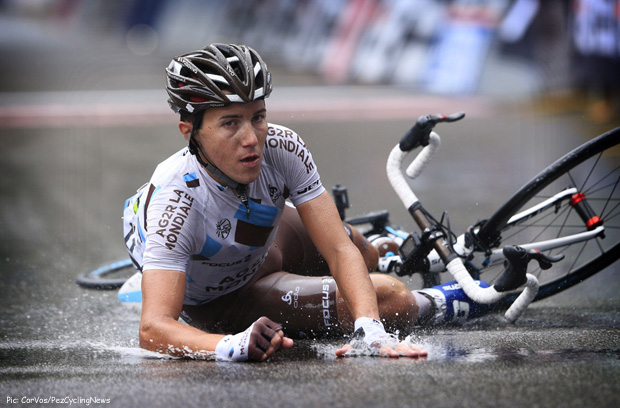 Domenico Pozzovivo managed to slide his way across the line for 15th place.