ROADSIDE: One of the most impressive performances of the season was that of the 135 riders who survived the rain, snow and extreme cold at the 2013 Milan-San Remo. Kudos also to the officials, journos and spectators who braved the horrendous conditions like our man Alessandro who was there roadside to capture all the action of this crazy day. Here’s Ale’s view from a very cold roadside at La Primavera.

“My daughter still dressed but sleeping on the sofa and the little 5 months Mario grooving in a world he only knows. I say myself that, maybe, just him a day will understand the passion of his father for this special race. Now I think maybe a day we will chase it together, or maybe not. But, what’s more important is the fact I start again to look forward to another eve, another Piazza Castello start, another Sanremo. Which is nothing, but everything. Which is a toy, but moves lives. Imagine you are on the Poggio looking to the sea: just breath this air a minute. Just taste it. It’s air. It’s everything you need.” 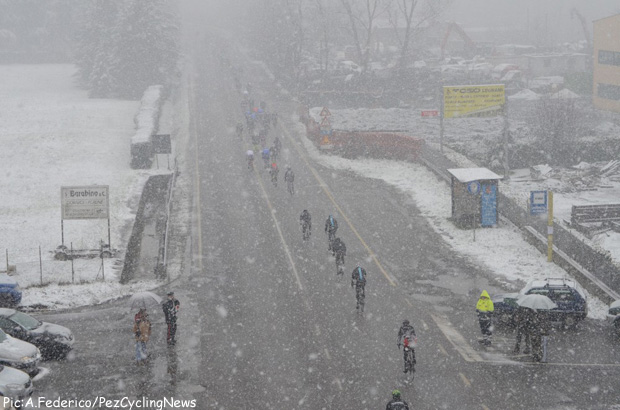 This is how I finished my roadside story last year. Twelve months have passed and once again I have the chance to chase my favorite race. A long winter has passed studying something new to propose to you, patient readers, and a solid plan was in place in order to change spot points and have a very different view of the race. However, the forecast was for very bad weather on the Appenines and I was maintaining my solid historic plan as back up.

It’s very early when I come in Piazza Castello and even my friend Angelo has not yet arrived. We will share the honor to show to Pez readers the best of this race. Angelo is a specialist of portraits and I like more the action, so we combine very well together. It’s very cold at the start, this race is not exactly a warm one, but I have never felt so cold in March. A cappuccino together with Angelo, the credentials and we can start the day. The riders delay their move to the starting line till the end, except for the new African Team which is one of the first; good luck, it’s quite a challenge for them. There’s also the first black guy starting the Milano Sanremo, a sign of a cycling evolution! 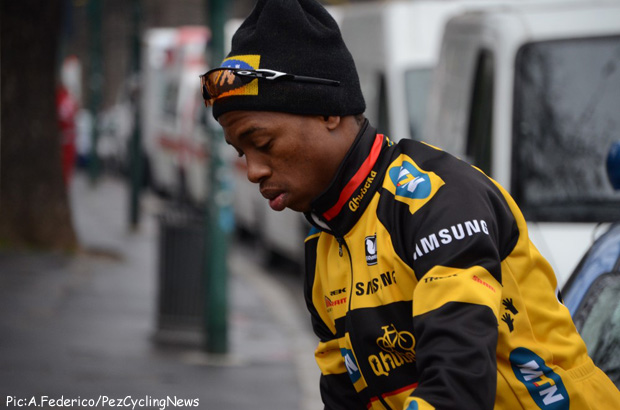 Songezo Jim making history at the start but he would only make it to Sanremo in the car after being one of the many victims of the cold. 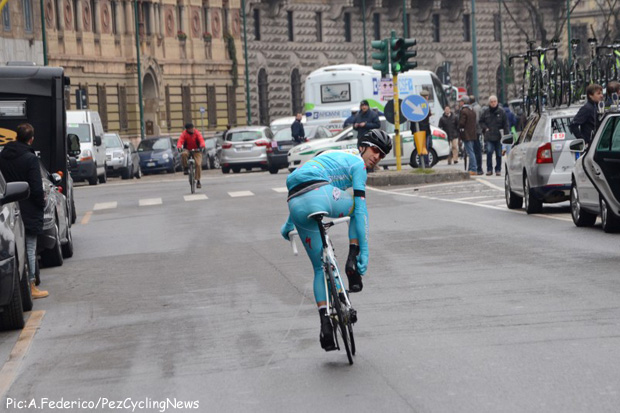 I will leave the starting village few minutes before the riders to catch my car in south Milan and to start my sequence of pursuits. The first passage is always the one in Binasco, where the early break takes the way; and that is also the case this year. 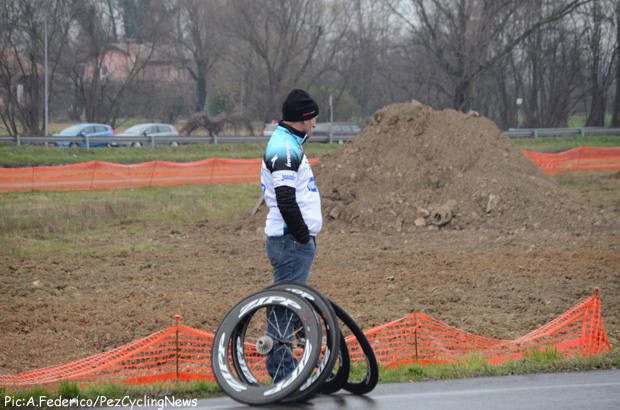 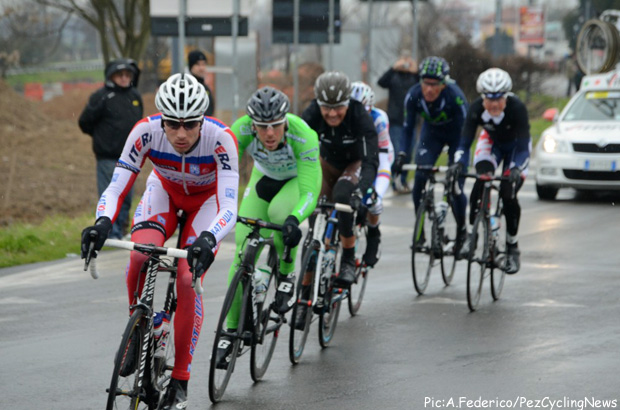 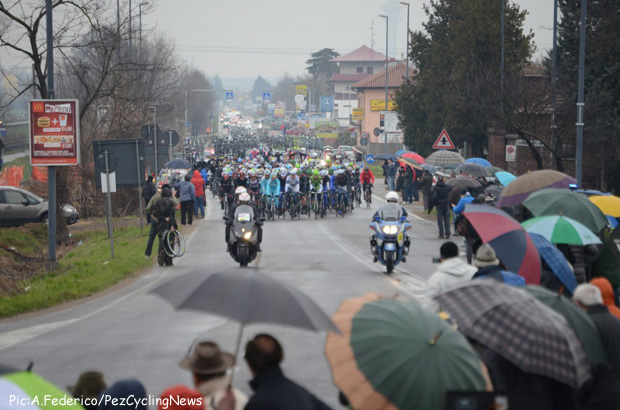 Six riders and the bunch still sleeping. While I drive to the second place I start to realize something is going to turn wrong. The sky in front of me is dark grey and the rain coming down is very strange, it’s almost snowing. When I come to Pontecurone it’s in fact fully snowing, but I don’t care a lot because the road is clean and I know the Lombardia region is cold, it will be better coming south to the coastline. 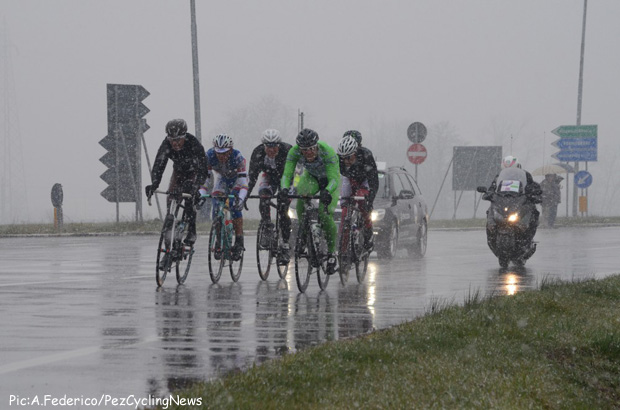 The early break gets its first taste of the snow. 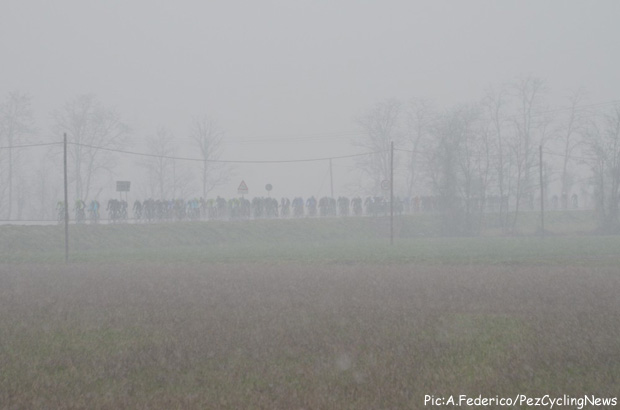 There’s a peloton out there somewhere. 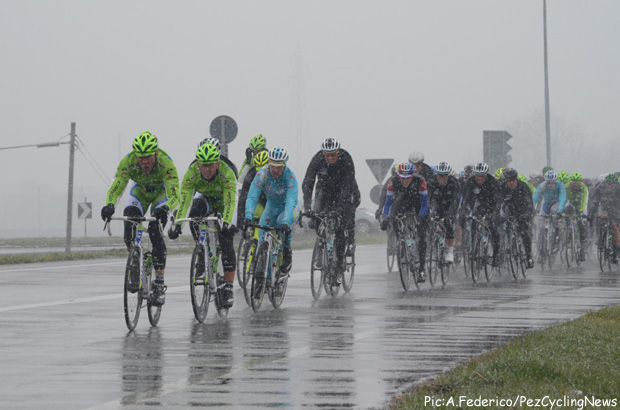 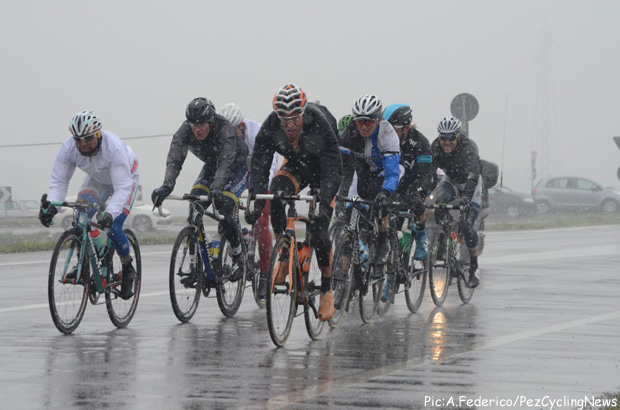 The six riders have increased their gap to more than nine minutes and before the group’s passage I keep my eyes on twitter to watch developments of the race – “The Sanremo will skip the Turchino” – a tweet alerts of a very unusual change in a bike race! All riders will stop their race in Ovada, they will come up on their motorhome and they will be driven to the Riviera, in Arenzano, Where the weather is better. I cannot believe this, but there’s not much time because the bunch is now rolling quite fast. The snow has increased and it’s very difficult to see something from far. 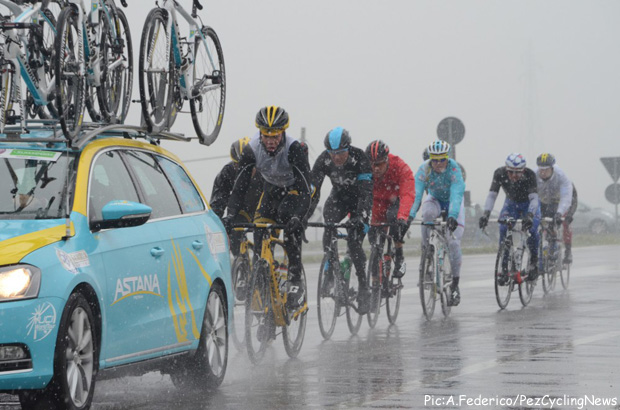 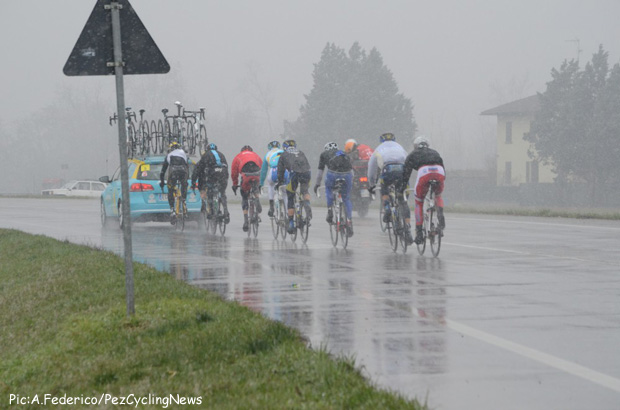 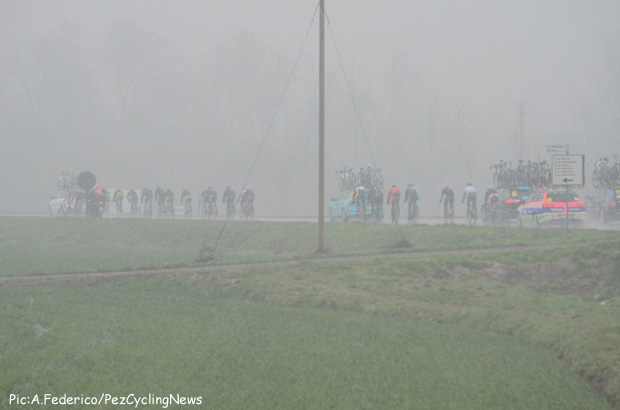 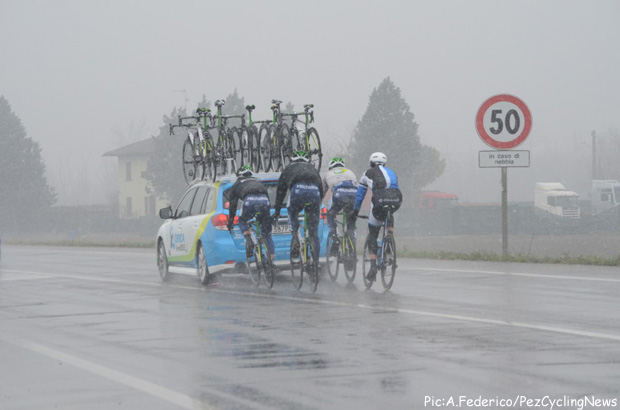 Usually in this place the group is well compact and the pace is regular but when they passes the riders are very selected and you can hear screams of every kind coming from the race. It’s, in few words, a mess. There are several riders that are trying to rejoin the main group and someone is in a very big delay. Also the African Songezo Jim is one of the last and I imagine how difficult this race is now after just 70 km from the start and more than 200 km to the finish. 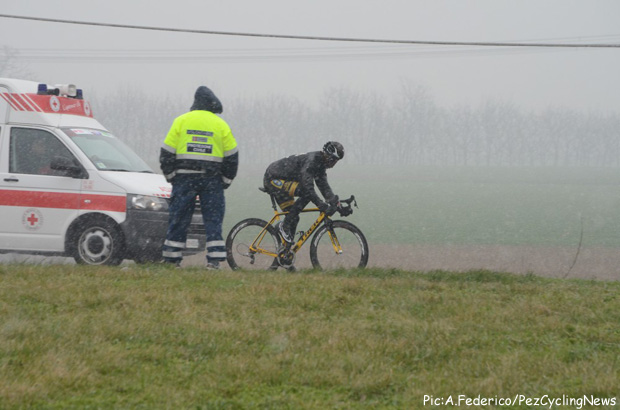 Songezo Jim not enjoying his history making day so much now.

I move closer to Ovada and the situation get worse. On the phone is Angelo, who’s on the Turchino – “Alessandro, it’s terrible here, it’s even dangerous to drive, how they will climb up here?” – “Angelo, turn your car and drive back to Ovada, they will stop the race there”. So a very new plan is taking its form. Angelo will document a very unusual arrival of the race and now, while I write, I know he has seen desperate scenes and I cannot wait the time his pictures and story will be posted. About me, I witness the dramatic sufferance of a group of strong men that is proceeding inside a storm of snow; this is not cycling, it’s epic. And these are not riders, but very hard men, unconscious of the fact they are writing down another page of this sport.

While I approach Ovada I cannot stop to think this is an unique event, that this condition I can watch now are coming probably once in a century. The Primavera race is now fully submerged in the worst winter. 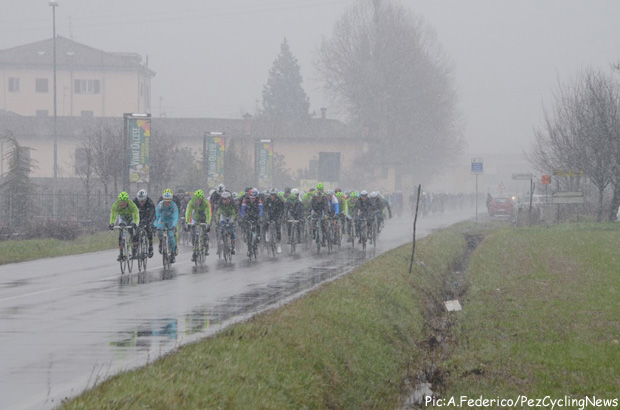 At few kilometres from Ovada the condition are getting dramatic. It’s dangerous now, the snow is all over, also on the road and when the bunch comes the atmosphere all around is unreal. There’s the silence that just the snow gives to the landscape. No screams now from the bunch, it’s seems the riders are a kind of robot. They pedal with the energy left in their bodies and they do it mechanically till the group disappears behind a white, thick curtain of snow. 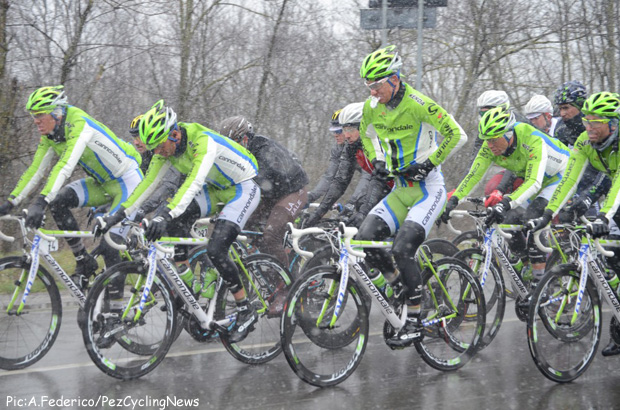 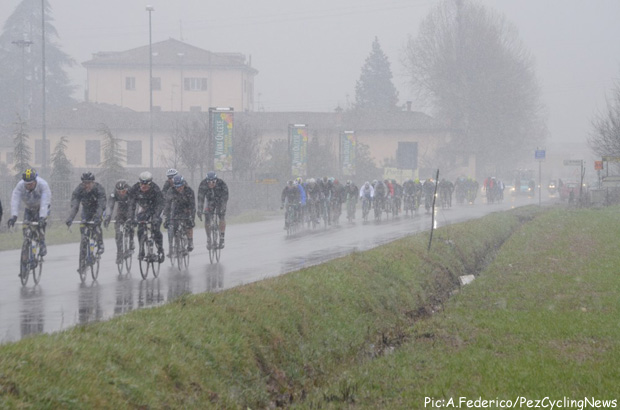 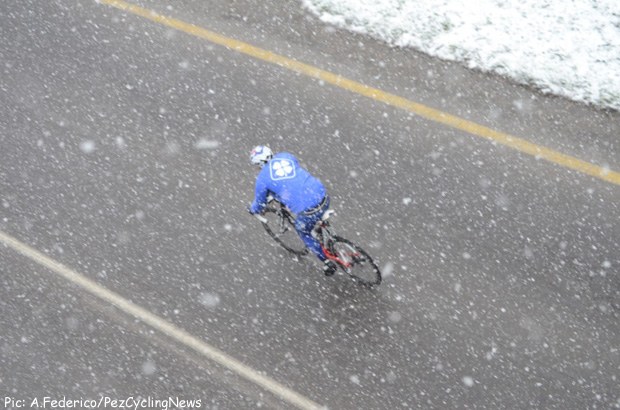 Here comes the moment I think it’s better I quit and I come back at home, to my babies and to my wife. I just imagine the negative comment I will receive when at home, my wife will realize the condition in which I was chasing the race. But then I start to remember the words I wrote last year; about the air I would have to breathe once again on the Poggio. It’s the Sanremo of the life. It’s the kind of event that comes once a time in a life, I’m here, front row, I’m part of it and I will cover it till the end. Would you do different? 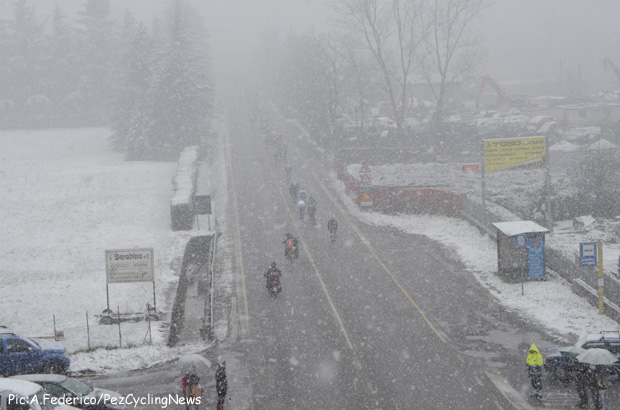 Ed’s note: Alessandro did make it to Sanremo as did a very impressive 135 riders. Tune in tomorrow for Ale’s second part of this torturous day.