Inside Georgia: The Mountains

– By Dave McKenzie of Flanders-iteamNova – With a one hour car lift before the start of the toughest stage, then racing for 200km over two mountain passes, then another hour and a half car lift after……it was going to be a long day.

Unfortunately before the day even began we were down one rider. Drewie woke up at 5.00 am with a stomach bug – throwing up for the rest of the morning. There was no way he could start the stage. It was a bummer not just for the team, but also for him. He had been riding well all week, and actually was saying how good he felt. 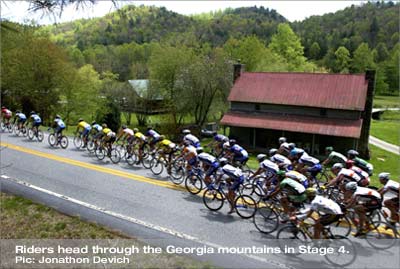 So on the start line we were six. Al and Scott were our main hopes, both within 30 seconds of the lead. As we took off we had three neutral laps of town before the official start.

I changed through my gears in the first 200m and realised not one gear change was matching the cogs, what’s more, it wouldn’t even go into the 23 cog, which I would most likely need. So I called the Mavic spares and they give me a spare bike while they fix my gears, problem is the saddle is 2 inches too high and the pedals had toe clips?????

Ok, better than walking I guess. By now the peloton was out of sight on its second lap of the 2km course. You could say I was starting to stress just a little bit. I rode through the finish line looking like a real “gumby” (hubbard, loser, etc).

The crowd probably thought I was some tourist getting in the way or something. Anyhow by the next lap the Mavic boys had fixed my bike and had it ready for me to swap over. They did a great job…..thanks guys.

I rejoined just before the end of the neutral and got my way to the front pronto. When the flag dropped the first attack came immediately so I jumped with it. We got a bit of a gap, but it wasn’t going to be that easy and the bunch dragged its way back to us. As it did someone else launched over the top of us and a few others went with him, this time they opened up a gap fast and before Navigators even started to chase they had 20 seconds.

We had no-one in the move and it was going away. At this point Dom attacked and rode solo across to the move. He couldn’t have timed it better. He was the last guy to go across. There were about six guys in the front and about four of them were high on GC, so Navigators and a few other teams had no choice but to chase. So for the next 130km that was what happened.

We were happy with this, although Dom was 2 minutes down he would climb with his escapees no problem.

By the time we hit the second major climb of the day at 130km the break had about two and a half minutes and it was now time for the major players to come out and play.

Trent, Jurgen and I got Scott and Al into the best possible position for the start of the climb and then waved them goodbye.

I actually did try to go with the leaders, but with 60 kg guys going up a 10km climb at warp speed, my solid 70kg can only hang for so long. So I had to let go, but I got myself into a good group who were pretty keen to get back on the descent. They obviously had no idea what was going on up front did they?

The race had split to pieces. There were now three Saturn, three postal, Fred Rodriguez and ….you guessed it… Al Iacuone in the lead. They were being chased hard by a group of 25, but the tour leader Henk Vogels was behind that desperately trying to bridge back with a small group.

This is how the race would stay – a big drag race between three groups, with the first group winning the race. Rodriguez took his second consecutive stage and moved close to the lead.

Chris Horner finished second and took over the lead, and Al came in a solid third and moved himself into the top ten.

It was a great day for us, Scott finished in between the first and second group and moved into tenth position.

Tomorrow is a street race around Atlanta, and should be pretty damn fast. I’m predicting a bunch sprint and with my legs starting to feel good, I’m going to give it a nudge.

Rider Diaries provided courtesy of Flanders-iteamNova. Check out the official website for FLANDERS-ITEAMNOVA.COM more info on the team.