The day started off badly enough when we completed the 50 mile transfer in torrential rain, however, when they announced at the start that the radio helicopter was being kept out of the sky due to tornado warnings, it capped things off. 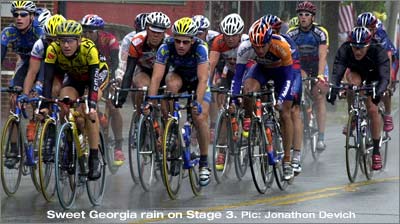 We sat in the van like schoolboys, waiting for the announcement that school had been cancelled for the day. It was not to be.

Miraculously the skies cleared for the race start and stayed that way for the majority of the day.

For the first time since the Tour began the peloton rolled out at a leisurely pace. This was welcomed by all except the odd couple of riders. One rider went clear as the flag dropped and managed to open up a maximum lead of 15 minutes. The funny thing was another rider attacked a couple of kilometres later and sat 2 minutes behind the first rider for about 140km.

I don’t know what the director of the lead rider was telling him, but I know what I’d be doing if there was a rider only 2 minutes behind…..

So after 160km the heavens re-opened and down came the rain. Already my backside wasn’t having the best of times on this Tour (chaffing etc..). Anyone who sits on a bike for any length of time will know what I mean. So, I certainly wasn’t enjoying the last 50 kms in the rain.

As we entered the finishing circuits the lead riders were caught, so it was “gruppo compatto” with three laps of 3 kilometres to go. It was looking like it was going to be another bunch sprint and then we got then another downpour on a descent leading onto the circuits. This created havoc and made it almost impossible to see. Imagine that 100 riders blindfolded down a descent……no thanks.

There were three KOMs on the circuit, but this one was a lot tougher than the first day. It went in two sections with two short sharp hills, the second one steeper than the first and due to the steepness along with the rain, guys were sliding everywhere.

Over the other side there were a series of twists and turns leading into the finish.

The field split to pieces and in the end it suited a rider like Fred Rodriguez perfectly. He sprinted clear to win the stage.

Scotty Guyton put in a great ride to finish 11th on the stage and Al Iacuone also made the split, which keeps them both in contention for overall honours.

Tomorrow is the big day. I’ve heard that there is no more than 5km of flat road…….we’ll soon find out.

———–
Rider Diaries provided courtesy of Flanders-iteamNova. Check out the official website for FLANDERS-ITEAMNOVA.COM more info on the team.