Today’s exclusive Racer Diary from Al Iacuone of Flanders-iteamNova: “Another day with the same old story, another frantic start till a break got going again. The only difference today was that Saturn decided to stop chasing at one point. It took about 2 or 3 km before the sprinters team came up top the front to take on the stage. This almost meant today’s break was successful; they only got caught with 900 meters to go.” 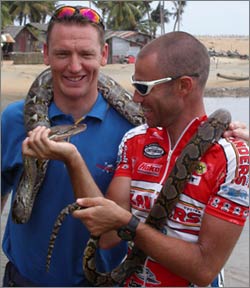 Al encounters another kind of “snake” at the Tour of Langkawi.

I feel for those guys working hard all day and then be caught within the last km must be awful. Especially the Japanese guy Fukushima he’s the most aggressive rider in the race trying to get away every day. Today he had four goes before the 5th was the right one.

For myself I’m happy with the commissaries today. I came down in a crash just inside the last KM and they managed to sort out the guys who got dropped from the crash victims so I did get the same time as the winner although being far down the results. I’m OK so you’ll have to put up with my stories for another 4 stages.

The highlight of the day for me came before the start. Nan, our local driver and helper found a snake at the water edge and soon everybody was posing with it. That’s one thing I’ve always liked about pro-racing, the travelling to other countries, meeting new people and seeing other cultures.

In the bunch today there was only crap-talk. Seems most riders have recovered from yesterday although today the South African team had a lot of stops from their riders.

The mistake of the day was made by the Canadian team; after Roland Green punctured with 15 km to go the whole team waited for him. Because of that the commissaries made a barrage so they couldn’t close the gap using the teamcars. Until now all punctured riders have come back on their own using the teamcars. It’s a costly mistake because Roland and his team lost almost 2 min today.