The bunch on Langkawi rolls on, looking for something other than a sprint finish, and Al Iacuone continues to make predictions… “How wrong can you be, I was sure there wasn’t going to be a bunch sprint today and look who won the stage Stuart O’Grady. If you look at the results you’ll see there was a group of about 50 or 60 riders still together. In fact it was really another one of those boring stages. After just 1 km Fukushima started his 25th attempt at getting away, and riders from the other Asian teams fighting for the Asian classifications, which are really important here, soon joined him. The bunch just let them go and rode up the first mountain at a steady speed.” 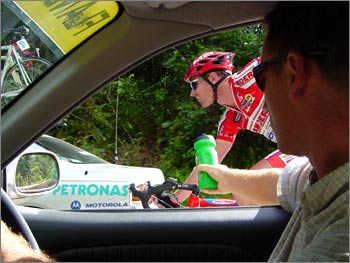 IteamNova’s support serving up drinks on the road.

The second mountain of 2nd category wasn’t up to that classification it was just a 9 km steady uphill. It wasn’t worth attacking on and by then Saturn had picked up their daily routine together with Columbia-Selle Italia. So it was climbing at a steady though slightly faster pace again. It looked like everything would be played at the 3rd mountain a 5 km steep climb.

Just before the climb Saturn took a bit of a breather from their chasing and Jamie Drew took me in his wheel to keep up the pace so that we wouldn’t get swamped from behind. Strangely some Saturn riders started complaining about us taking up the lead and the pace. They must think they own this race as their own playground but we’re still in their fighting for our own chances. 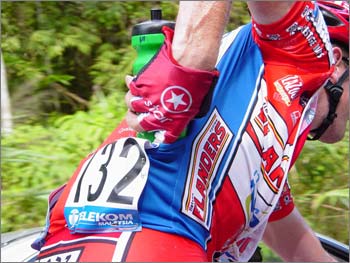 View from inside the car – a plethora of flat stages made this one of the day’s hilites.

At the bottom of the last climb there was an attack but they didn’t really get a gap and Saturn soon had them under control. The only real attack came from Roland Green who had a good go but was immediately marked by Saturn. A couple of other guys got across and when Roland looked over his shoulder after about 300 meters he stopped his attempt and a first group of about 30 riders formed. In the downhill and flat that followed the group grew to the 50 or 60 that went into the bunch sprint.

Tomorrow won’t be a bunch sprint it just can’t be up the Genting Highlands climb. But there won’t be any surprises. Like I said Saturn thinks they own the race together with Columbia-Selle Italia and it looks like they’ve agreed to slug it out amongst each other on the climb up to Genting. So there probably won’t even be an early brake that can surprise the better climbers by getting a big head start on the climb.

I’ll try to be right up there for a good inside report tomorrow.