Inside Langkawi: The Finale

Flanders-iteamNova’s Al Iacuone signs off today with his final entry in the Langkawi Diaries – taking us inside the race. Thanks to Al and his team for allowing us all a unique racer’s persepctive of the race…

The day started good but coming into KL the weather took a turn for the worse. We road into town in convoy from the hotel and when we went up on the freeway the police made us wait for another convoy coming from another hotel. Imagine that close to 100 cyclists just standing around waiting on the freeway with all the team and official cars behind them. 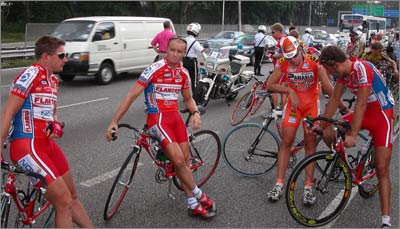 Life in the bunch – waiting for the “convoy” to arrive at Stage 10.

But when we got going it started raining and the course for the criterium was really dangerous. The oil being washed over the road made it even worse. The riders took it easy for the first couple of laps. And the race direction decided the ignore time differences today because of the danger crashes.

One of the first crashes involved Munoz who is second on GC. So I think the race direction made a fair decision because it would be wrong if someone like him lost his good placing over something like this final criterium.

The points however did count and there was an extensive battle for the points between Stuart O’Grady and green jersey Graeme Brown.