The Tour de France 2014 Route was announced today in Paris at the Palais des Congrès and Pez was there. The Amaury Sport Organization (A.S.O.), owners and organizers of the Tour de France, chose a Fall October Wednesday at 11 am in Paris each year to set the stage for their own hoopla. The “yellow” carpet was unrolled to welcome everyone who’s anyone in the world of cycling, complete with paparazzi, fanfare, and interviews like only true cyclists can, according to the colors yellow, white or green–white for VIPS, yellow for riders, and green for media/press. 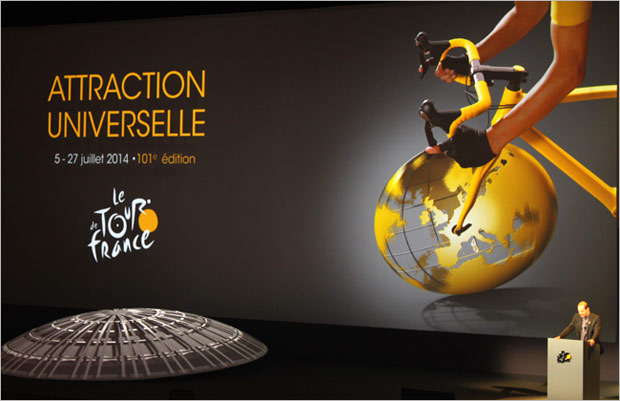 Armed with my printed out pdf invitation, I showed up about a half hour early to start scouting out celebs. As I worked my way around the room, I found legend Bernard Hinault I also ran into retired riders Alexander Vinokourov (now general manager of Team Astana) and Jimmy Casper (Ag2R-La Mondiale). I then had to find my way to the press room to secure press credentials for photo area access after the show. To my surprise, they handed me a green bracelet (reminded me of my college days – where’s the plastic keg cup?) Again, color coded, some party-goers had yellow, some had green. 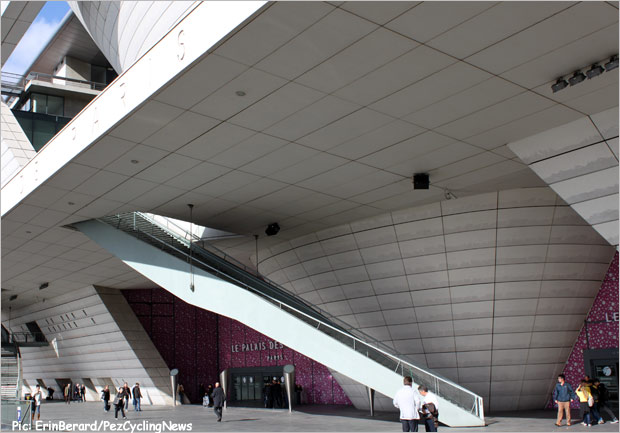 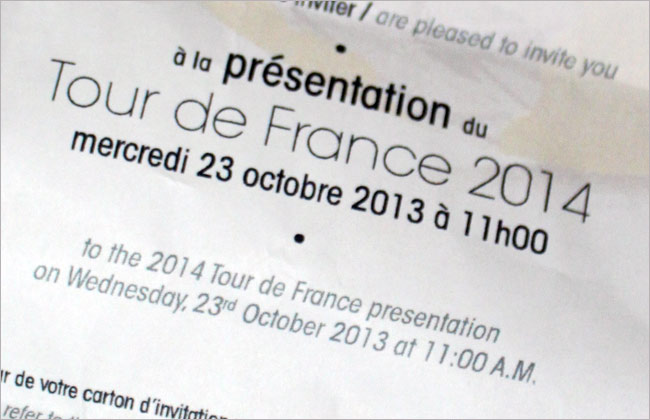 That task completed, I made it back to the mob of press waiting to enter the theater. A.S.O. hostesses flanked the entrance (in true Tour style) and with a wave of my now crumpled invitation, I entered and had just a few minutes to find a seat. Speaking of Oscar night and Hollywood, this year I was convinced that George Lucas might have had a hand in producing the show. On the center of the stage was a giant dome, reminiscent of top of R2D2’s head. Its center glowed yellow at first. 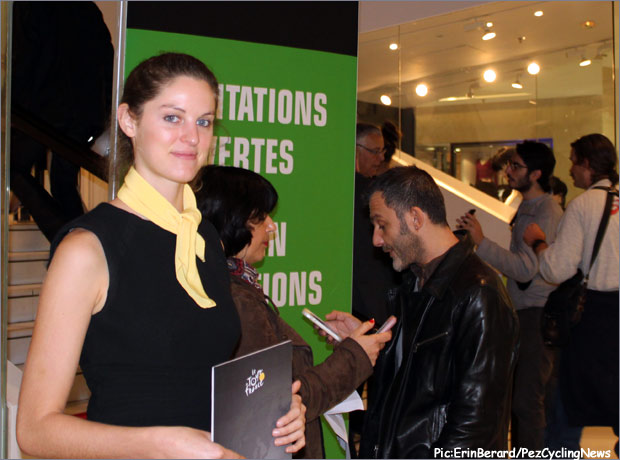 As usual, the big names were seated front and center in the yellow section, trapped in front of the flashing paparazzi: the stars of the show Christopher Froome, Mark Cavendish, Rui Costa, Marcel Kittel, Alberto Contador, Christophe Riblon, Thomas Voeckler, Jens Voigt, Brice Feillu, and Lloyd Mondory, to name a few. Rumored to be there but absent was Nairo Quintana. 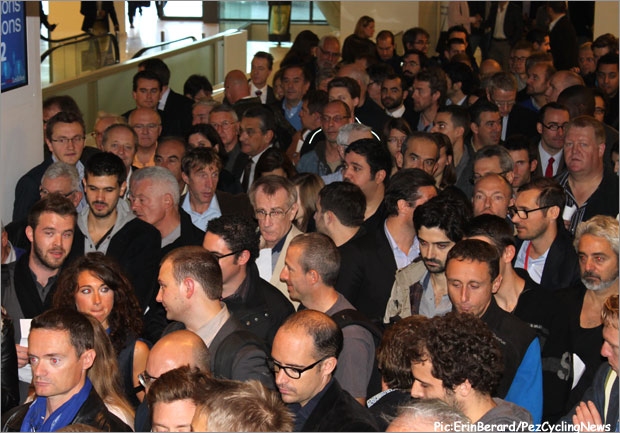 The lights dimmed and the spectacle began with a video featuring cameo interviews with Froome, Cavendish, Contador, and Riblon about their best memories of the 2013 Tour and after a countdown with the dome, the film launched into a stage by stage recap of the great moments and helicopter broadcasts of last year’s race. The dome turned out to symbolize a globe and later a compass highlighting the presentation’s theme of Attraction Universelle. 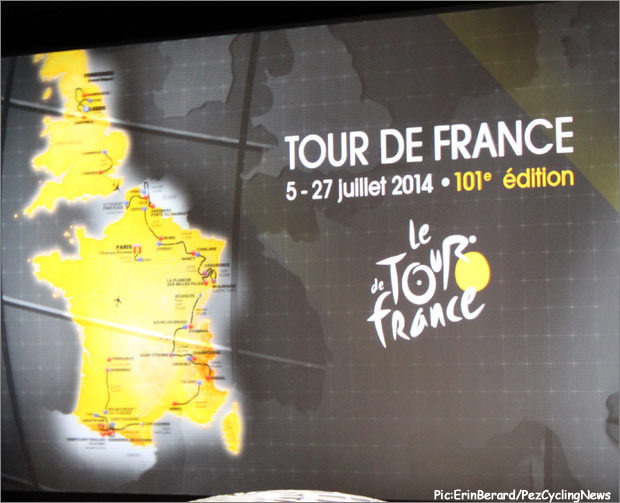 In his introductory speech, Tour de France Race Director, Christian Prudhomme, highlighted the international reach of the Tour de France (broadcast in 190 countries) and the A.S.O.’s commitment to international development of cycling events around the world. Prudhomme stated that while the 2013 Tour 100th edition was so French, the 101st Tour represented a turning point of the TDF towards the world in its quest to become even more international. 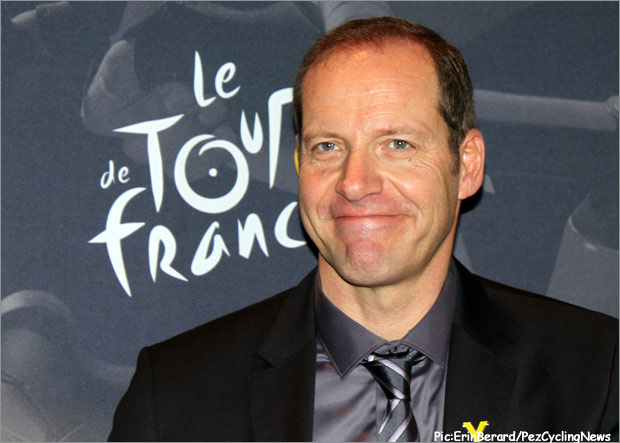 He highlighted the growth in popularity of cycling in Great Britain and congratulated Brian Cookson’s recent appointment as President of the UCI as well as the French Federation of Cycling’s own David Lappartient’s recent appointment as UCI Vice President. He wished Brian good luck in his position and hoped that Brian would encounter a calmer sport. He said that it is challenges that drive us forward. 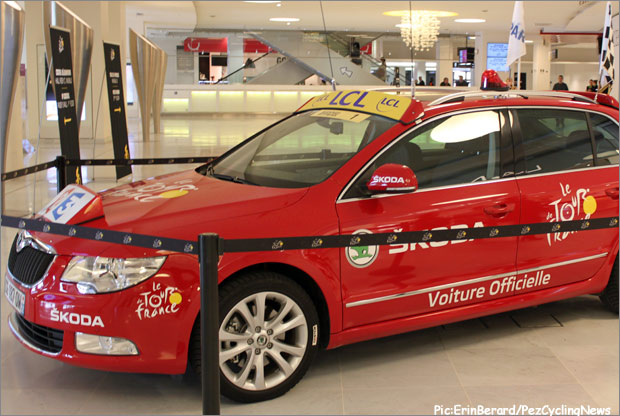 Up to the podium next came Gary Verity, Chief Executive of Welcome to Yorkshire, who presented a five minute tourism video of Yorkshire, the land of Masterpiece Classic type scenery, rolling hills, (some quite steep!), royal heritage, two national parks, tea and scones, epicenter of British sport, bubbling brooks, region of champions. He especially loved quoting that if Yorkshire had been a country, they would have taken 11th place in the 2012 Olympics medal count. He also speculated that Yorkshire may just have more beautiful countryside than France, gutsy no doubt, but one must keep up the medieval Great Britain – France rivalry. 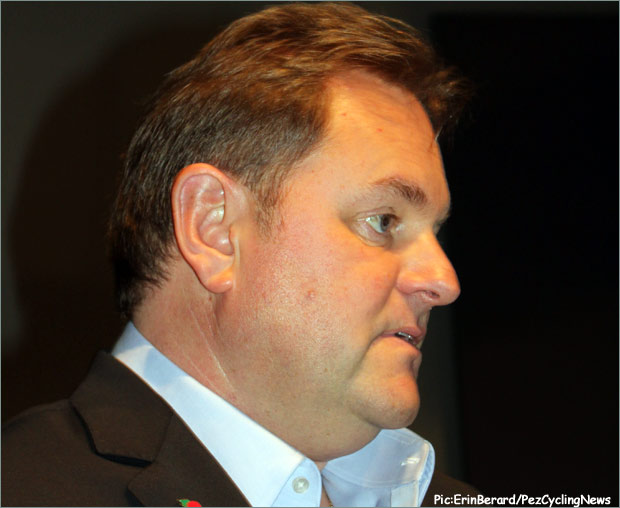 When I caught up with Gary after the presentation, he told me he estimates over 1M fans will turn out for each of the first 3 stages and also said that Mark Cavendish is aiming for a win in the first stage from Leeds to Harrogate, as his mother was born and still lives in Harrogate. 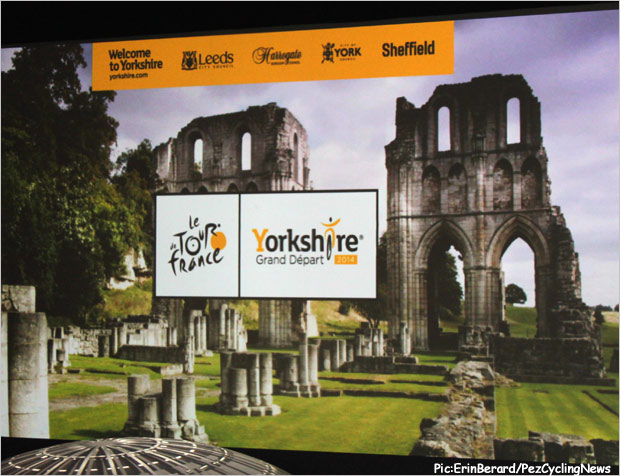 Music straight out of an epic Hollywood movie then followed with the presentation of the 2014 route, lights dimmed and the famous yellow line started its 3-D like journey across the giant screen. The audience was glued to their seats as the yellow line ascending and descended across Great Britain, Belgium, and France. Prudhomme then reviewed each stage with the help of the giant compass lighting up as Sprinteur, Puncheur, Grimpeur to indicate the type of stage. It is unclear how useful this compass light show actually was but it sure added some Paris bling to the whole event. 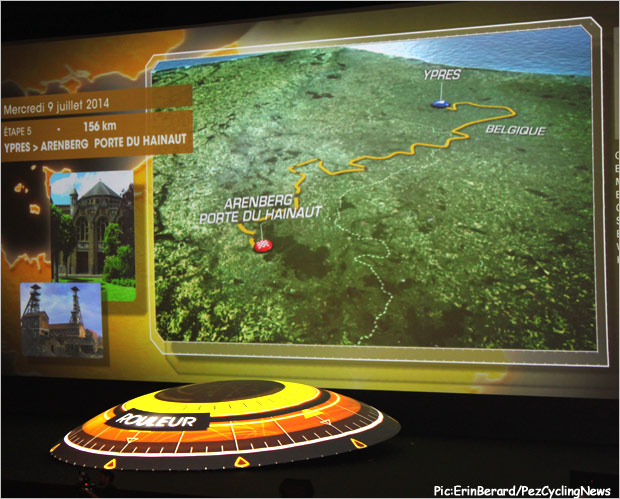 After the start in the UK, the Tour will enter Belgium and will pay tribute to World War I with the Stage 5 start in Ypres, in Flanders, an area famous for intense fighting between Germany and the Allied Forces. Stages six and seven will take the peloton through Arras, the Chemin des Dames, Verdun and Douaumont, sites of key WWI battles. This stage will also include 15.2 km of cobblestones which are sure to possibly wreak havoc in the peloton during the Tour’s first week. Prudhomme described this stage as “worthy of Liege-Bastogne-Liege.” The route will then continue onto Reims, Nancy, and then into the Vosges mountains before heading the Alps, Provence and the Pyrenees. One day before the finale in Paris, there will be a decisive 59km individual time-trial from Bergerac to Périgueux. (See summary points below.)

As soon as the presentation ended, I finally got the chance to flash my green bracelet and was allowed backstage for photos and interviews. I caught up with several riders to get their reactions to this year’s route. 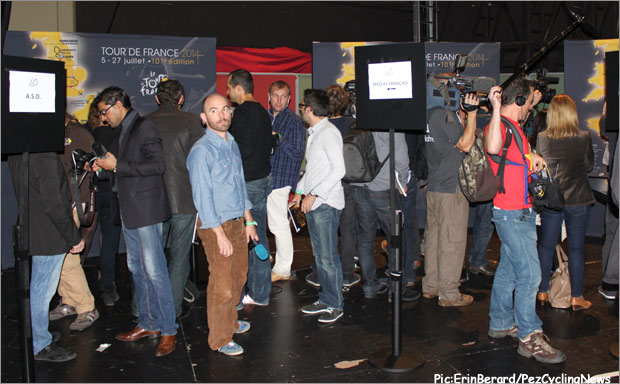 Christopher Froome who when asked about the selection of Sky’s 2014 TDF team, he was open to the possibility that both he and Wiggins may be selected. He feels that the mountain days and the time trial will be his strong points. 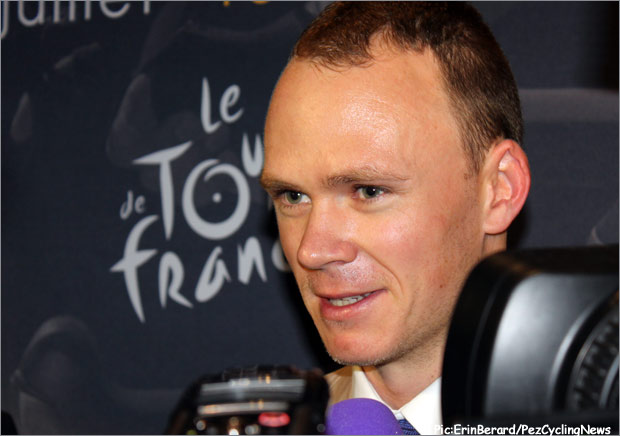 Thomas Voeckler is waiting to plan his next year’s training schedule until November 4th, when his team Europcar will find out about the status of their renewal application for a UCI WorldTour license (1st division). Asked about this year’s TDF route, he said it is all about the mountains.

I also spoke to Jens Voigt says the key to this year’s Tour is not to fall in the cobbles and to go for it in the mountains. He is excited about his new Trek Factory team and hopes to be selected for the Tour team. 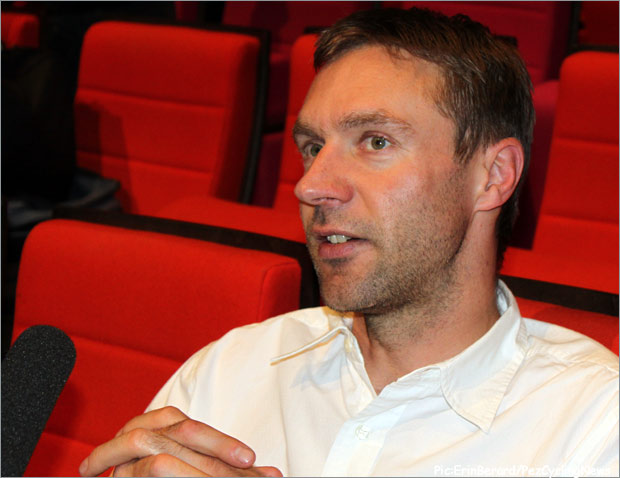 Finding Contador was a bit like ‘Where’s Waldo’ as I overheard other media asking each other had they seen him. They thought they had seen him…Where did he go? All of a sudden, he appeared from behind the curtain and then immediately made his way in a mob up the stairs. 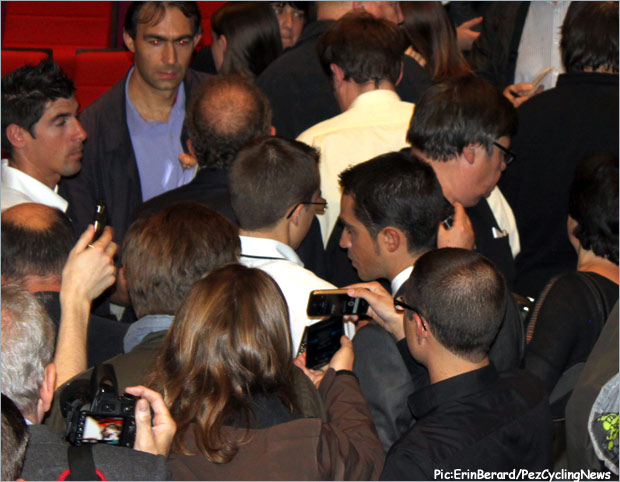 As I walked out of the theater myself, it seemed only fitting that the last two VIPs left standing were Bernard Hinault and Brian Cookson, one French cycling hero and one British cycling hero. See you in Leeds! Cheers from Paris. 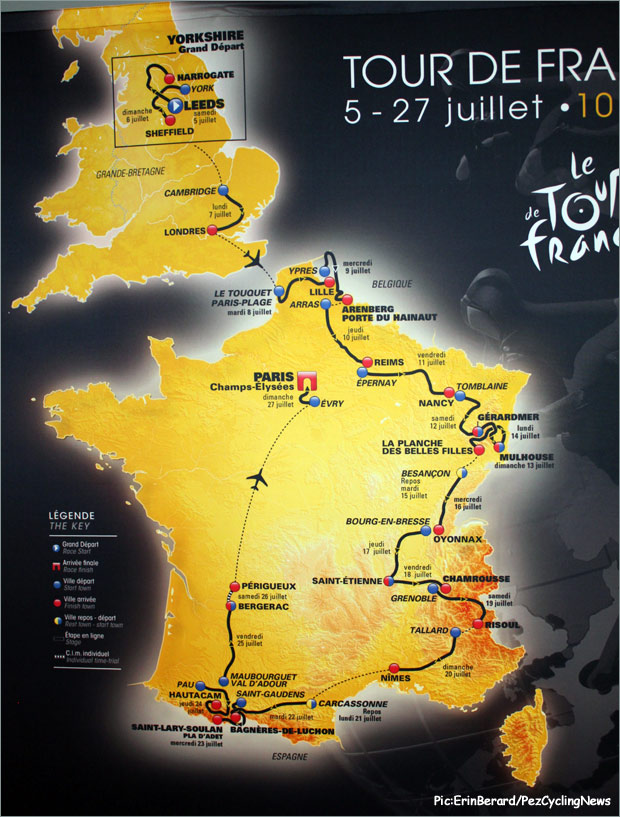 The highlights of the 2014 Tour route include:
Saturday July 5th to Sunday July 27th 2014, the 101st Tour de France will be made up of 21 stages and will cover a total distance of 3,656 km.
• 3 countries (Great Britain, Belgium, Spain)
• Northern most start in history of TDF will be Yorkshire, southern most start in history of TDF was the 2013 start in Corsica
• 9 flat stages
• 5 hill stages
• 6 mountain stages and 5 summit/altitude finishes
• 4 medium mountain stages
• 1 individual time trial (59km), the day before the finale in Paris
• 2 rest days in Besançon and Carcassonne
• A taste of the Classics and cobblestones (nine sections during Stage 5 from Ypres-Arenberg Porte du Hainaut over a distance of 15.2 kilometers, (2 km more than the Stage 3 of the TDF 2010 from Wanze-Arenberg Porte du Hainaut)
• 3 Mountain ranges included: Vosges, Alps, and Pyrenees
• 25 level 1, level 2 and HC mountain passes divided geographically as follows: 1 in Yorkshire, 11 in Vosges, 5 in Alps, 8 in Pyrenees (there were 28 in 2013’s TDF)
• 1 long individual time-trial of 54km on July 26, 2014 between Bergerac and Périgueux
No time bonuses will be offered at stage finishes and intermediate sprints
• 9 new stage cities: Leeds, Harrogate, York, Sheffield, Cambridge, Ypres, Oyonnax, Risoul, Maubourguet Pays du Val d’Adour