Whilst Colby Pearce and Daniel Holloway managed to put together a string of six day rides a few seasons back there hasn’t been a regular stars and stripes team on the European winter boards for many a year. But Guy East, winner of the 2008 UiV Cup for U23 winter track events – with fellow American, Austin Carroll – has teamed up with aforementioned Daniel Holloway and the pair have been marketing themselves to the European promoters.

They limbered up in the Three Day event held last month in California before heading for the city where all the tulips are – Amsterdam. But as Guy says; ‘it’s five kilometres per hour faster when you get to Europe!’ 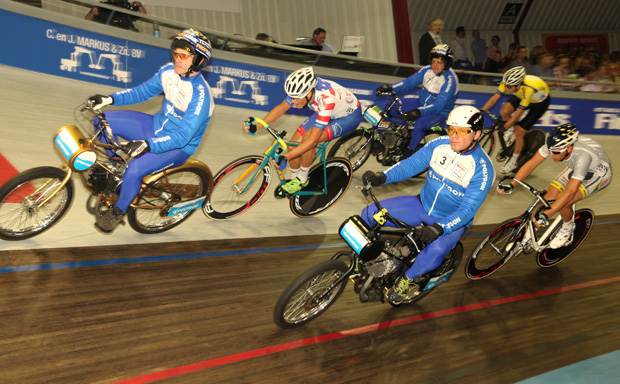 The beauty of six racing and what also makes them so hard is their variety. Here Guy’s pictured in Amsterdam in the derny race – which he won.

First up we had to offer our congratulations to Guy as a newly married man.

PEZ: Congratulations, Guy – but how does the new Mrs. East feel about you disappearing to the six days?
She likes the sixes – along with her family she was there for the three days in California and really enjoyed it. Then the way things worked out she was able to come to Amsterdam where she hung out with Marcel Kalz’s girlfriend.

PEZ: How did you keep in shape over the summer; did you ride the summer six day in Fiorenzuola?
Yes, I rode Fiorenzuola with Daniel; and when I came home I got married. Over the summer I rode a few stage races in Mexico (including a stage win in the Vuelta Mazatlan, ed.) and a lot of races in the San Diego area.

PEZ: What did you think of the California race?
I didn’t know I was going to be riding until three weeks before it. Once I knew I was riding I put in as much work for it as I could and we went pretty well. We weren’t on top form but survived and managed to win one of the madisons.

PEZ: What did you think of the race?
The crowd could have been bigger – it could maybe have used more advertising to publicise it but those who went to watch it enjoyed it. I believe it’ll be bigger in 2014 and there’s talk of a race in Las Vegas, too.

PEZ: Was it good preparation for Amsterdam?
Oh man, yes, a big help to get us ready! It was very beneficial; it wasn’t the hardest but it certainly helped us find our track legs. You think; ‘that wasn’t so bad, I mean there are Euro guys here.’ And then you get to Amsterdam and it’s five kilometres per hour faster!

PEZ: How’s it working out with Daniel?
Good – we rode Fiorenzuola together and have ridden together in the past. He knows his way round a six day track and we hope to become a fixture on the scene. 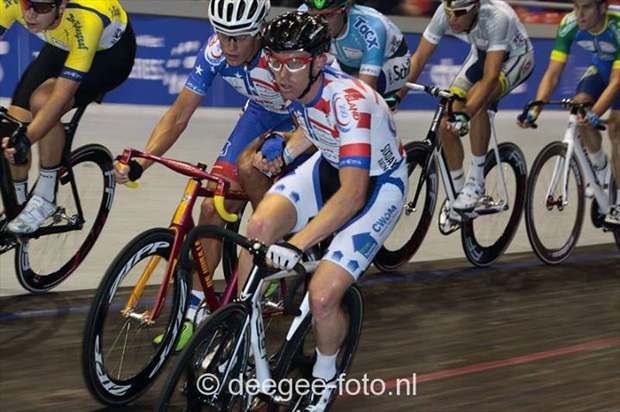 Daniel handing off to Guy in Amsterdam.

PEZ: And you’ve got sponsors together for your adventure?
I fell in love with the six days last winter and when I saw Christian Grasmann’s and Leif Lampater’s Rudy Project team that gave me the idea to put together a six day team. I don’t like the responsibility of a road team, having to ride the programme which is dictated but I like the idea of private sponsors – so I went out and found some.

‘More Than Sport’ support me – where we try to promote the idea that there’s more to being a top athlete than just your performances on the track or field. Stoemper have built me some really nice bikes with Predator supplying the bar/stems combinations. 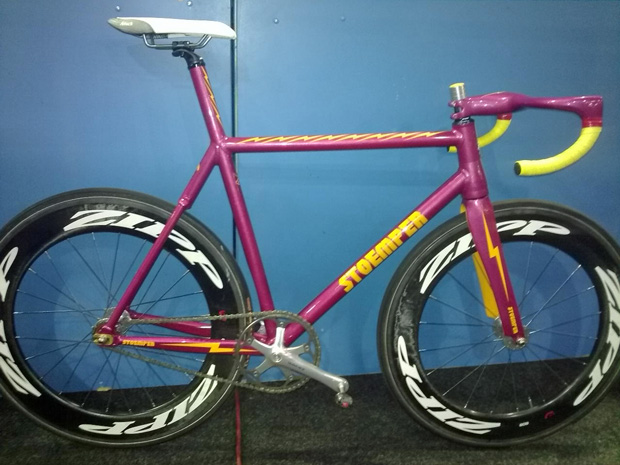 Stoemper will be shooting videos of all the six days we ride and using them for promotional purposes. 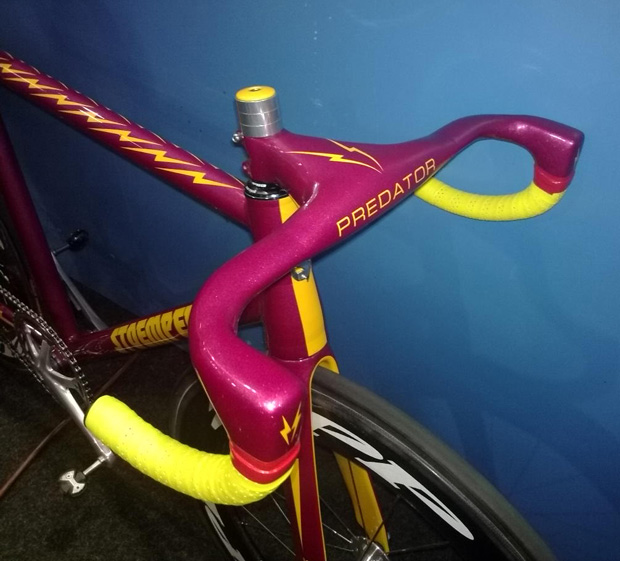 PEZ: How did you get the Amsterdam ride?
We got it through Patrick Lyons at Echelon Sports Management – we were turned down for Grenoble and Patrick stepped in to get us the Amsterdam contract. He also got us a US sponsor – the company which is building the new velodrome in Pittsburgh.

PEZ: How were the crowds in Amsterdam?
Good – at least half full every night and getting bigger as the week went on. 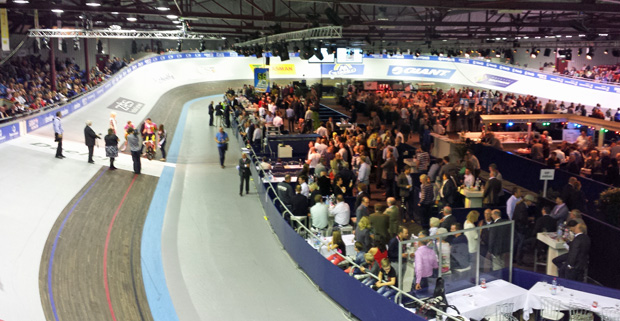 VIPS, riders, soigneurs, mechanics and hangers on in the center & good crowds in the stands brings an atmoshpere like no other to a bike race.

PEZ: Which night was toughest?
Boy! every night was fast – it was really hard to get back into the swing of it. I’d say probably the third night was hardest – the big guys were really going for it and we were fighting for our lives! But as the race went on I felt better and better.

PEZ: And your best night?
The fifth night when I won the Derny race. 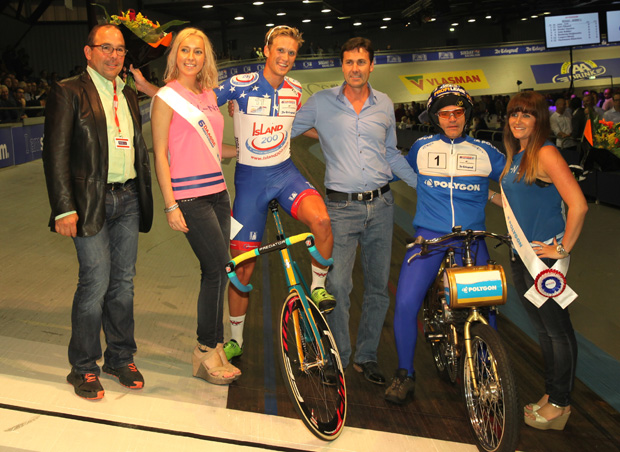 PEZ: De Ketele & Van Hoecke looked impressive in winning it in that last chase.
The field was well matched but Kenny and Gijs were the top team – they rode hard the whole six days and showed they were strongest. The German guys were riding against them but they still won.

PEZ: Lampater (2nd) seems to have found his game, again – he finished last season strong in Copenhagen in February.
Lampater looked great in Amsterdam. He was smooth as a machine and had a strong partner with Raymond Kreder – I think he’s going to have a great winter season.

PEZ: Mouris & Stroetinga (3rd) looked like an ideal pairing, pursuiter/sprinter?
Jens and Wim were very strong. They never showed a weak spot – Mouris has a huge motor and Wim has a sprint that can out drag anyone on the boards – even Cavendish. They rode an impressive race in Amsterdam.

PEZ: Which other races are on the agenda?
Daniel and I will be racing in Berlin and Copenhagen together. We’re also hoping for one or two more sixes to fill in the winter for us. I’m interested in doing a ‘Revolution’ meeting at the Manchester Velodrome in England if I can fit it in. And I’ll be going to Trinidad for grass track racing in the spring.

PEZ: What’s the plan to maintain fitness ’til the next race?
I live in a great climate for year round training. The weather is always favourable but we don’t have many races. I’ll train as much as I can and get behind the motor bike at the San Diego and LA velodromes between now and then.

When it comes to holding fitness between races I am definitely disadvantaged but I do the best I can with what I have.

PEZ: What’s the East goal for winter season 2013/14 ?
I want to win a chase with Daniel in the one of the winter sixes. It’d be awesome to win one in Berlin and to win the handicap chase in Copenhagen.

# If the good Lord spares us, PEZ will be in Berlin and Copenhagen to keep you abreast of how The Young Americans perform. #