Berlin Six 2014: PezCycling’s Six Day man Ed Hood is in the trenches at the world’s longest running Six Day cycling race, working as a runner for American riders Daniel Holloway and Guy East. Here’s his look at the first 3 days of action and events from the German Capital.

Day One:
I remember when I went to work at my first six day in Copenhagen in 2005; I thought Kris was joshing when he told me that we had to wash all the riders’ kit after the racing finished at 1:30 am. 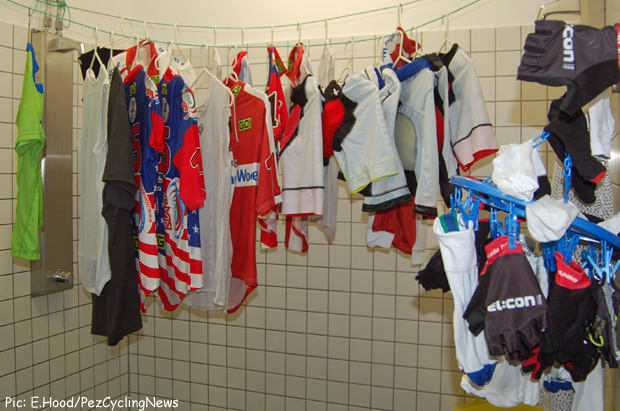 But he wasn’t kidding and now it’s just part of the deal; it’s still a relief when you slide that hanger in to the last ‘tricot’ though – that’s ‘jersey’ outside the world of six days. 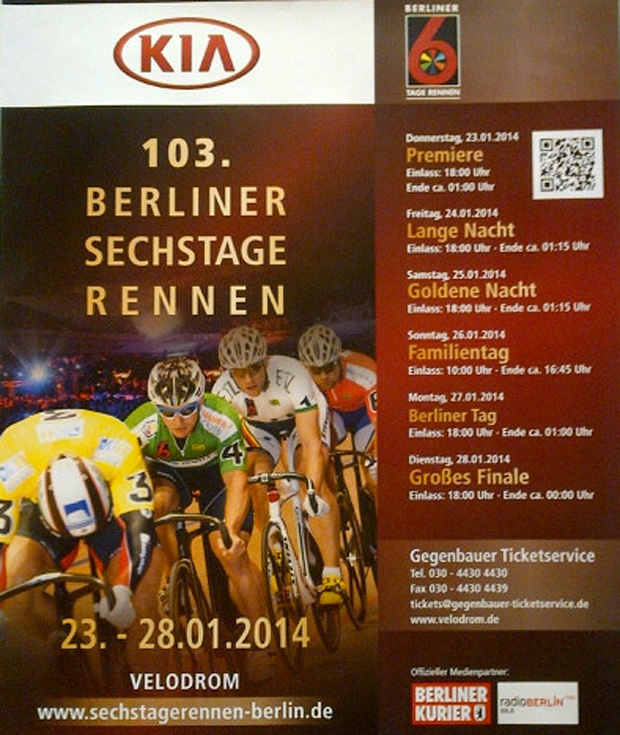 This time it’s Berlin where we’ve set up the spin drier; capital city of the reunified Germany, home to some 3.4 million souls and the world’s longest running six day race. The first Berlin 6 was run in 1909 and won by Floyd MacFarland and Jim Moran of the USA. We’re now at edition 103 – the reason the arithmetic doesn’t check out is that for many years the sport was so popular that the city could sustain two six day races each year.

That’s how Klaus Bugdahl comes to be ‘recordman’ for race starts on 26, and also on wins – nine times. In more recent times Patrick Sercu took the laurels seven times, as did Peter Post with Didi Thurau on six whilst Sigi Renz and Danny Clark are on five. All of the men named above are legends of the sport as are Eddy Merckx, Bruno Risi and Rene Pijnen who have all won here. 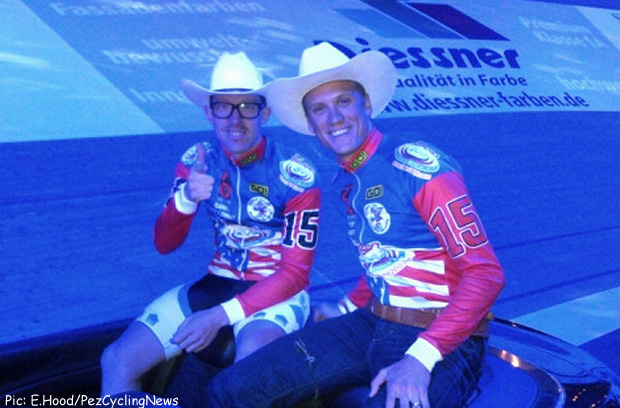 And whilst 1909 is a long time ago, there are still Americans on the ‘bahn’ – our team, Messrs. Guy East and Daniel Holloway both of whom are now into double figures on six day starts. But what you have to remember is that the six day race is just part of the show; checking out that race poster says it all – sprinters! 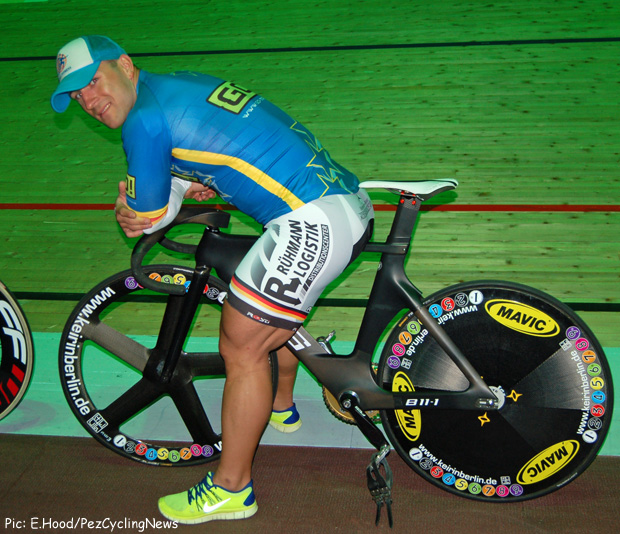 They just love the men with the big muscles here – match sprints, time trials, keirins, they lap it up. 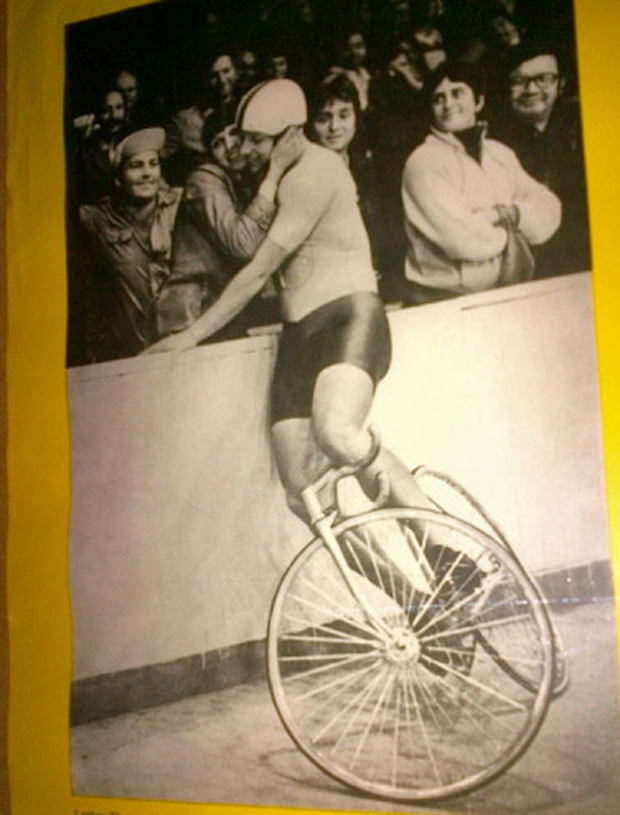 It’s no surprise, this part of the city was formerly East Berlin; in the 70’s and 80’s the East German ‘production line’ produced a string of the world’s fastest track men – Lutz Hesslich, Michael Hubner and Lothar Thoms, pictured above. 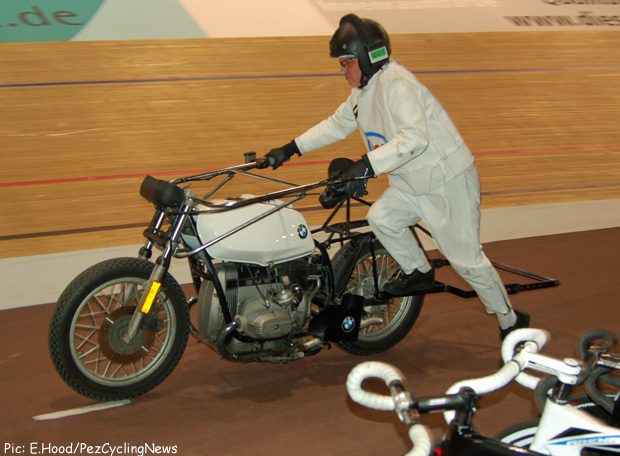 And they go crazy too over the ‘stehers,’ the big bikes where brave men hurtle round the bowl at warp speeds behind smoke belching, throbbing BMW’s. 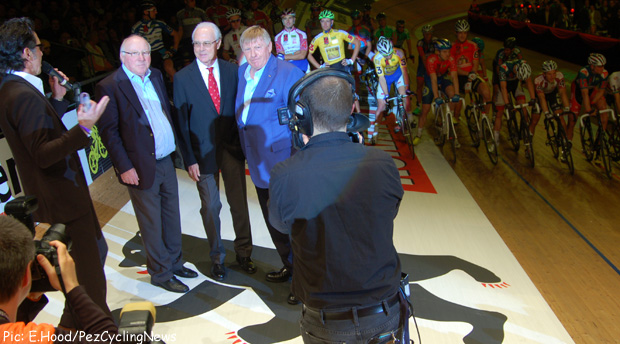 And to start the show? ‘Der Kaiser,’ – Frans Beckenbauer (red tie), one of the greatest soccer players in history and one of only two men to win the World Cup as a player (1974) and as a manager (1990). The photogs swarm, the pistol cracks and it’s ‘game on.’

‘What about the racing?’ I hear you say.

Day Two:
Yes, the racing, well, the track is big for a six day at 250 metres – Ghent and Bremen at 167 are what you want. Small, steep tight and you don’t have the Sands of the Kalahari stretching out ahead of you when you go for a lap.

And the field . . . power houses Peter Schep and Robert Bengsch have retired, this is Franco Marvulli’s last race, Big Bob Bartko ain’t getting any younger.

Iljo Keisse isn’t riding, nor are Niki Terpstra, Wim Stroetinga, Jens Mouris, Gijs Van Hoecke, Marc Hester, Michael Morkov, Alex Rasmussen and strangely, neither is big, fast Berliner, Marcel Kalz. Word is that in his case they wouldn’t give him the contract he thought he was worth.

But I digress, who is here? 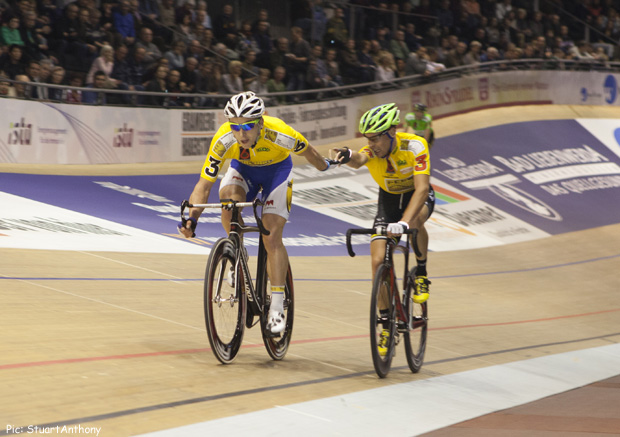 There’s a rejuvenated Leif Lampater (Germany), winner of the toughest six on the circuit – Ghent, he pairs with the man who partnered him to the win there, Jasper De Buyst (Belgian). 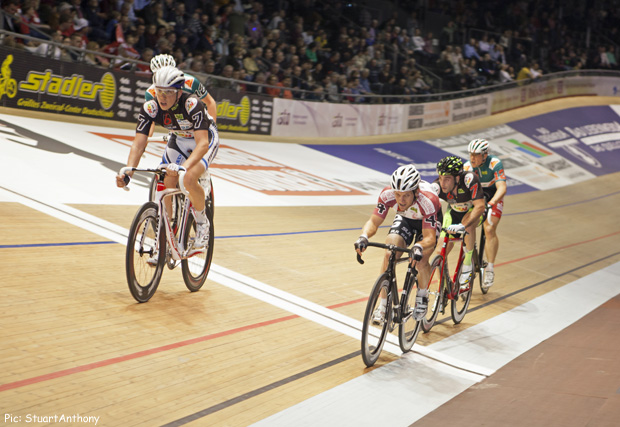 It’s hard to see that duo going down; whilst in second spot after night one – but destined for third, reckons Kris – are Amsterdam winner Kenny De Ketele (Belgian) paired with rock solid Andreas Muller (Austria). 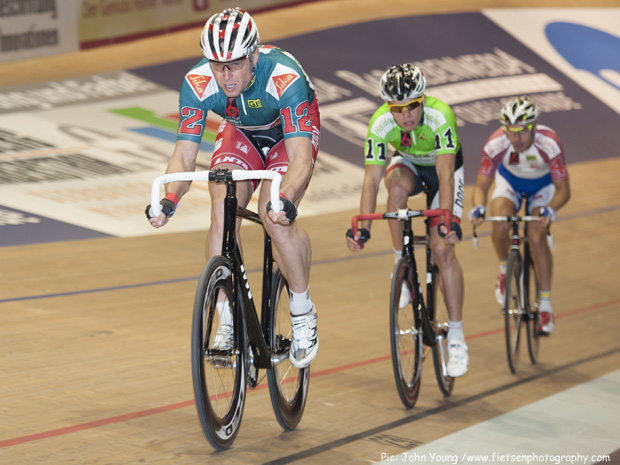 Big Bob Bartko with young Berliner, Theo Reinhardt are currently third but Kris reckons no podium for the local boys. 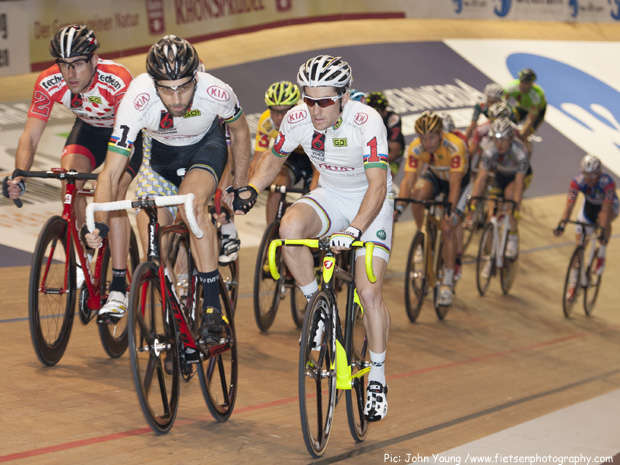 He thinks that current fourth placed World Madison Champion, France’s Vivien Brisse paired with German, Christian Grasmann will step up to the podium. But in my book, the team in sixth spot at the minute, Spaniards David Muntaner and Albert Torres will be on the podium.

The men from Iberia ride World Cup madison mega gears in six day chases – it’s not everyone who can handle that; the big gears kill most riders’ legs before too long. But the Spaniards get away with it – and this track is one well suited to that style. But there are another five nights to go before they dish out the laurels.

Last night’s chases weren’t the best to watch – but as I said yesterday it’s not just about the chases here, sprinters and stehers are a really a bigger deal. And the track is deceptive, it’s not just the 250 metres length it’s wide, too. For me, there’s room for another three teams on the wide open spaces, the peloton can look lost on the sweeping expanses of timber. 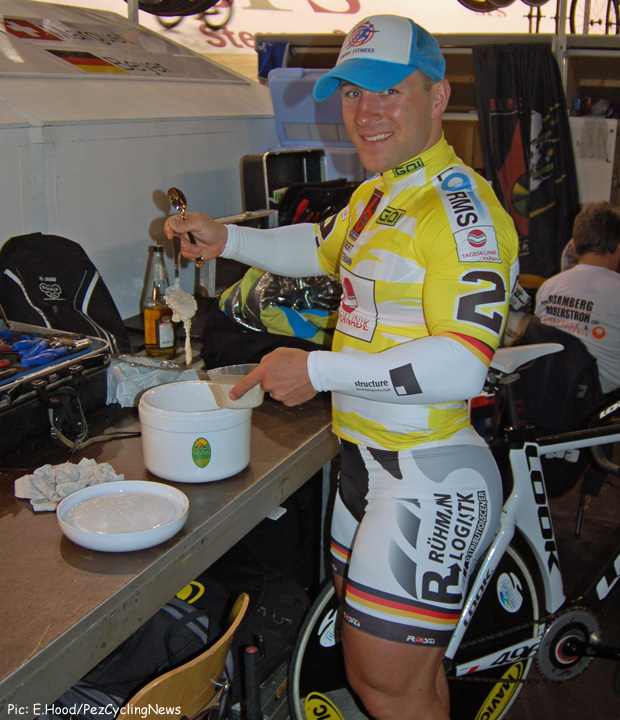 The sprinters flying lap brought the house down; as usual, with Robert Forstemann showing us his secret – porridge. 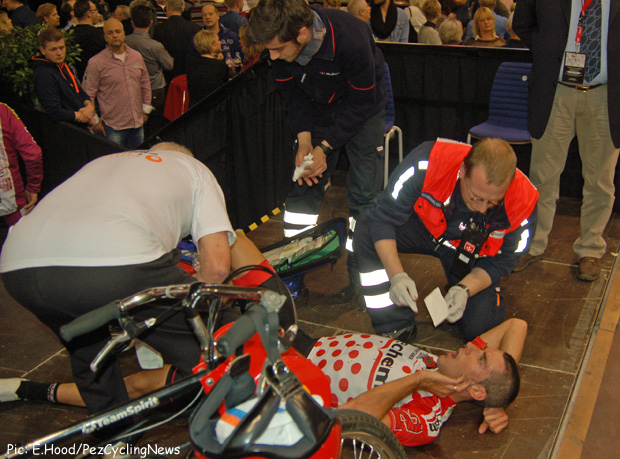 No smiles for Spaniard David Muntaner though, proving that even good riders can, ‘just fall off’ in a chase. That first 30 minute chase went to rapid Dutchman, Yoeri Havik and consistent Czech, Vojtech Hacecky – whose brother, Martin has featured in PEZ several times. 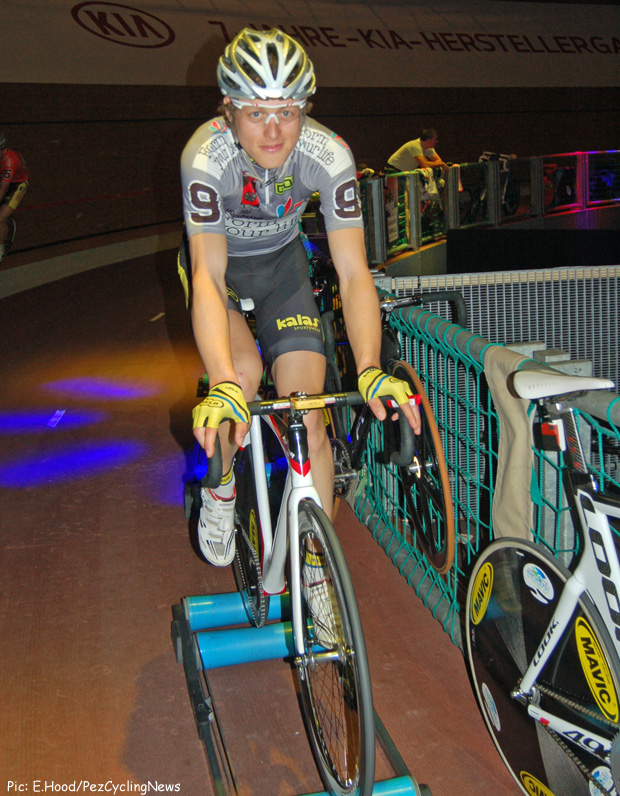 Martin is back in action here after his horrific crash, last year. 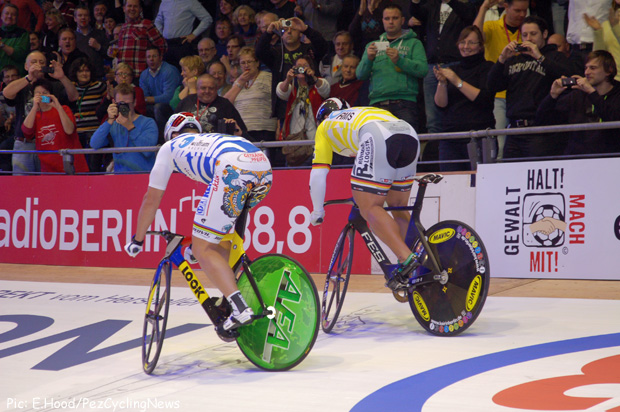 More sprinters – and the crowd always loves a stand still . . . 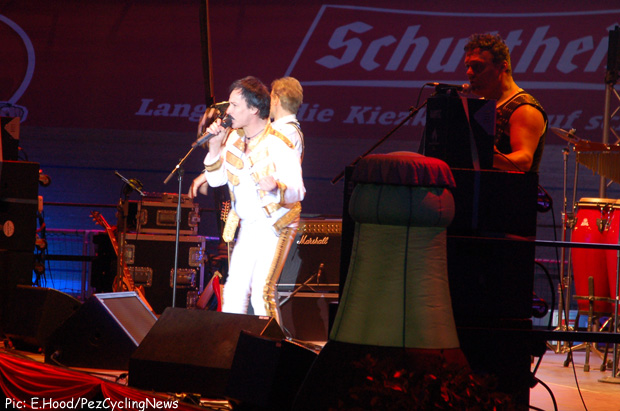 The 45 minute chase was won by Bartko/Reinhardt but Leif Lampater really has to brush up his “pretending I’ve been out-sprinted fair and square” routine – he had to practically stop to let Reinhardt take it.

Stehers, sprinters, ladies and with the programme running horribly late they axed the final sprint series and shortened the Derny – there were no complaints from our cabin . . .

Day Three
It’s never dull with Daniel around, this morning he was blending his special brew of Bullet Proof coffee – whilst wearing his Batman mask . . . 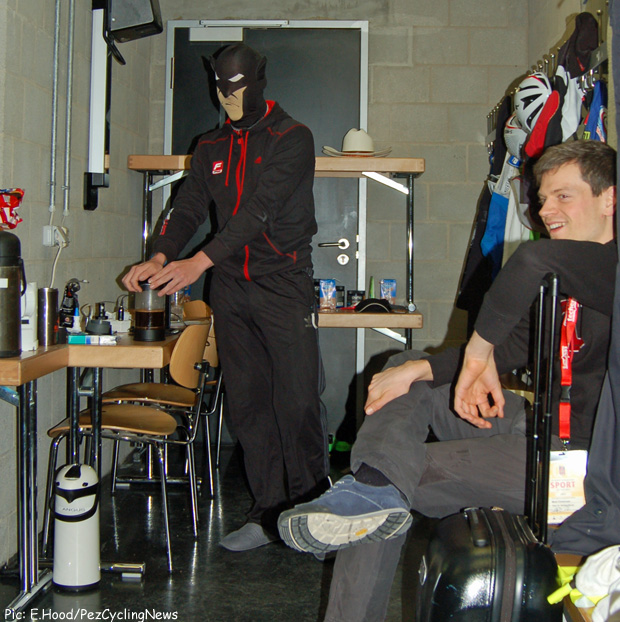 ‘Stand up, Stand up, for The Champions!’ blasts from the PA and more money heads for Fred Fairbrass’s bank account – the man who wrote the song for his 90’s band, ‘Right Said Fred.’

The supplies arrive; US riders cannot be expected to function without peanut butter. Kris and I tramped the streets of Berlin, yesterday to try and find some – no dice. 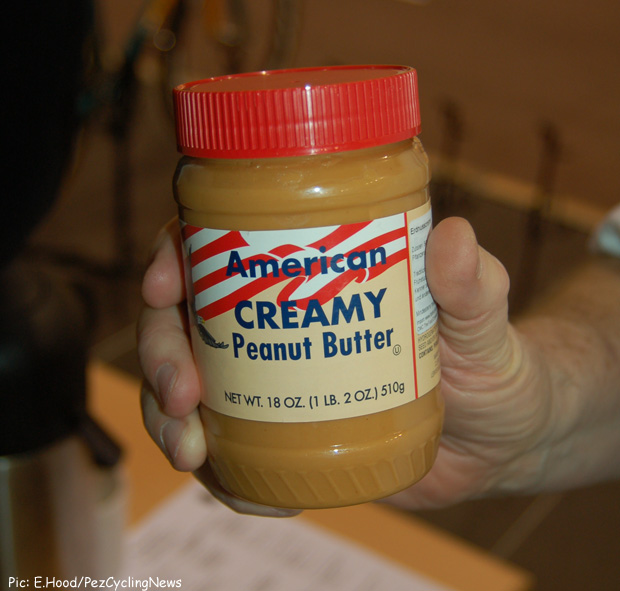 But Scottish photogs John Young and Stuart Anthony came to the rescue with genuine ‘creamy peanut butter’ from Lewisville, Texas. And if the Clements Nut Company is reading this and wants to sponsor a six day team . . .

The first chase was a bit of a nippy one, early on, but settled down so as Bommel/Thiele could grab a lap – but it’s always helpful if you’re a Berliner when you go for a lap, here . . .De Ketele/Muller took it, despite Andreas looking heavy legged to us – maybe his lightning visit to Mexico for the World Cup after Bremen has something to do with that?

AC/DC, ‘Thunder Struck’ blasts for the sprinters’ flying lap, then The Quo’s three cord masterpiece, ‘Whatever you Want.’ The full house claps, the speaker shouts himself hoarse, the boards thunder – big Pole Damien Zielinski tracks the fence, demands support from the crowd then hurls that Look off the top of the banking . . .

The six day guys never get this much noise.

But Forstemann is still the ‘Daddy,’ as the Glitter Band’s ‘Rock n’ Roll Part One’ – with their two drum kits – threatens the stadium with structural damage – it’s that porridge that does it . . .

Time for live music; Rachel Against the Machine – but if you’re looking for hard core Indie then forget it. This Rachel belts out covers – and the Berlin crowd seem happy with that; if a Lady Gaga song or two gets murdered along the way, well . . . . 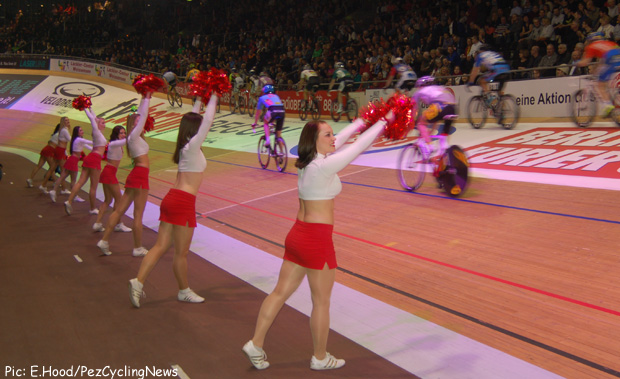 The Schultheiss Girls do their stuff – and again, no complaints. 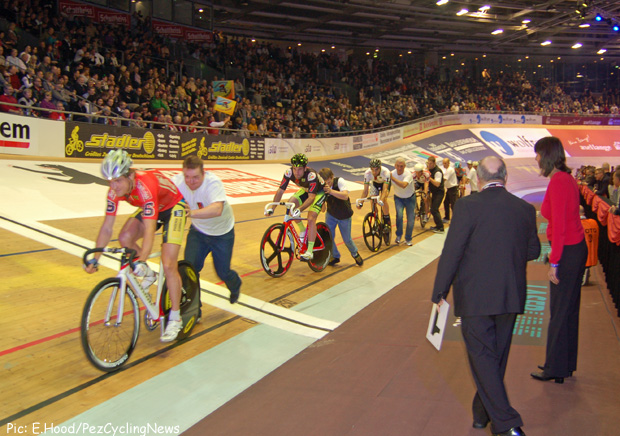 Ladies, Dernys, sprinters and gossip – word is that they’re going to abandon this six day in favour of three Revolution meetings over the winter.

Devil, it’s quick, De Ketele/Muller win. Cher provides the next show, well, from the other end of the track she might be the real deal – if about a foot too short to be true. 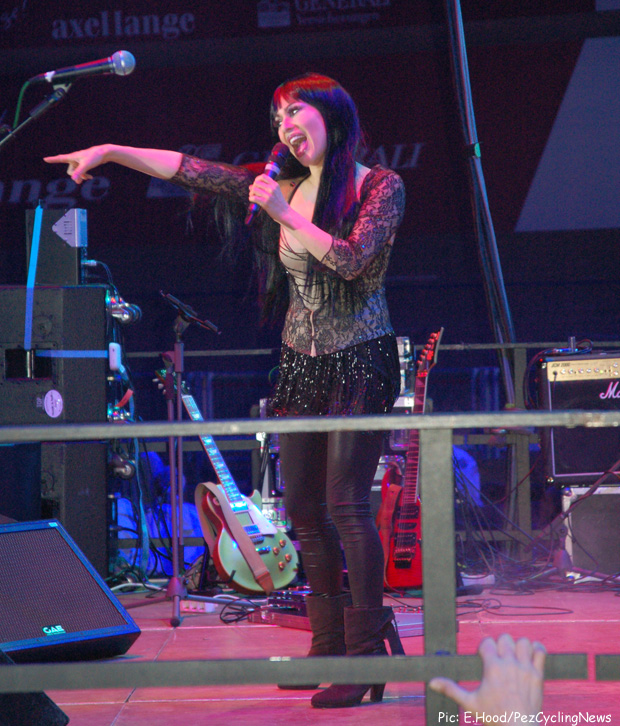 She’s actually not bad at all, if wearing on towards Edam on the cheese scale.

The chase, 45 minutes, maybe it’s because the first chases I ever witnessed were those one hour midnight death races in the Wembley Arena at the London Six, back in the 70’s but madison racing isn’t what it used to be. I remember a mad whirlpool of chrome spokes, silk jerseys and whiter that white socks.

The track’s too big, the field’s too small and the lap gains too contrived. In a real chase, there’s no peloton, just little groups of men fighting for survival.

In Berlin little ‘team pursuits’ of riders, usually three or four, take off to gain the lap and much of the time the peloton rides tempo and let’s them make the junction. But it’s not 1973 any more. And as for black socks . . .

Lampater/De Buyst took the chase at a canter; De Ketele is the only man on the track at their level – if he rides the Worlds madison with De Buyst they must start as favourites. Ladies, stehers – and these guys aren’t formulaic, it’s probably all choreographed but it’s fast, crazy fast. 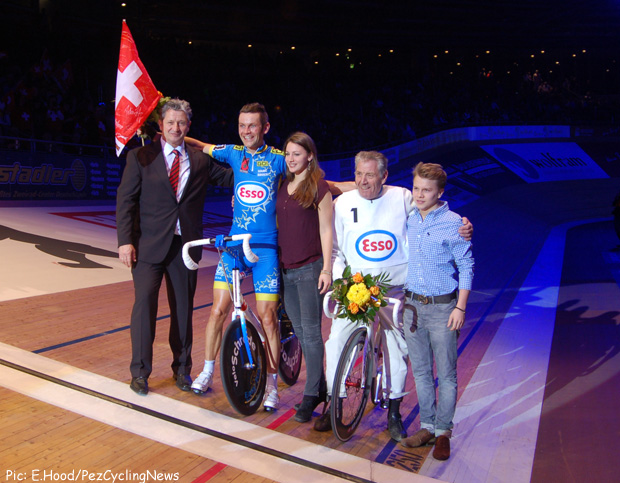 More live music, The Blues Brothers – and they hit the spot.

A drunken dude slides down the banking and heads for the riders quarters – security are on him pronto but not before he kissed Daniel’s hand. 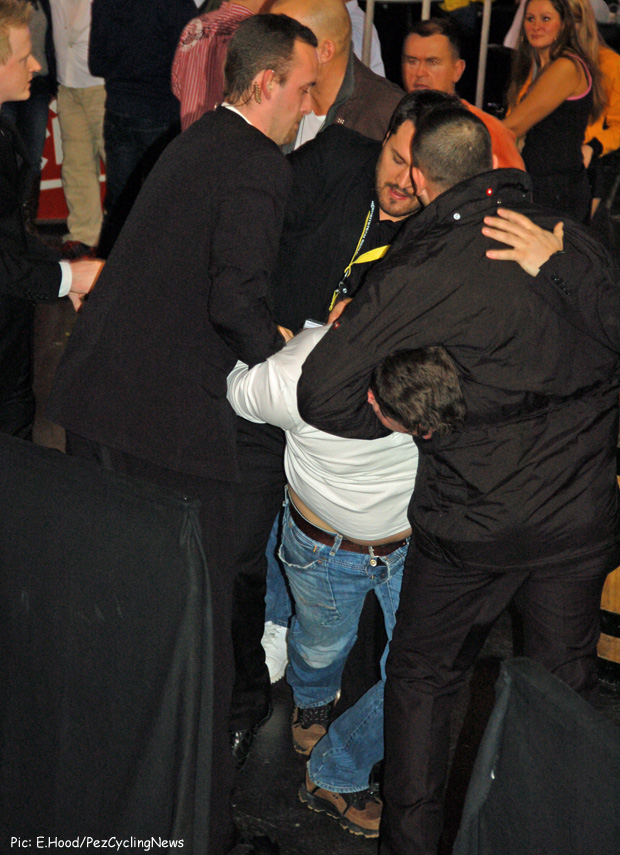 Strangely, security doesn’t find this all as amusing as we do.

Sprints and second Derny – if you’re one of the lower ranked teams then it’s always the second Derny. Luke Roberts and Franco win – the former “Madison Prince” looks much happier than he did in the chase. I haul Daniel in and we’re half way there …