CCN Pro Lee Rodgers recently took on the Tour de Taiwan for the 2nd consecutive year but found that things had changed for the worse in this tough UCI 2.1 Stage race. Or maybe it was just him? Here’s another entertaining look at pro racing from inside the peloton with Lee from the last two stages in Taiwan.

What a difference a year makes, 365 little days…

‘Oh ok, looks hard on the profile though…’

‘Nah, those are always wrong!’

The hill duly arrived, 50km to go on Stage 6., and I spent the next 5km with my head an inch above my stem, arse on the very tippy-top of my saddle and a mouthful of feathers.

Then we got around the corner and I saw the ‘2km to KOM’ sign, looked up and saw a wall that was noted in the book as 20% but was maybe more like 15 but either way IT F***ING HURT!

A year ago this time I’d already ridden the Tour of Qatar (ass kicked but finished), the Tour of Oman (ditto and then some), and the Tour of Langkawi (legs were finally starting to feel human again there), so you could say I was in decent shape. My Strava log for that period has me down for something like 2,400km at an average speed of 42.85km/hr!

A year ago that hill didn’t hurt cos I was flying, 15% felt like 8 and I was up there amongst those who were turning the screws whereas this time, by the end of this day, I felt like I’d been broadsided by a fire truck. Could also be I’m just getting on. I’m 40 and a bit now and although the legs still have the power and the lungs are good, recovery is definitely something that starts to lag a little.

I wasn’t the oldest guy in the race though, ha! That distinction went to 41 Gordon McCauley from New Zealand, who rides for Drapac. He’s known amongst the Drapac riders very affectionately as ‘Grandad’.

I’ll tell you what though, you young whippersnappers with your 24 year old legs and no-need-to-shave leg fluff, if you’re doing what we are doing at 40 I will salu… wait… no, I’d probably call you stark raving mad.

Anyway, back to Day 6, great stage with a lot of technical sections, especially on the descent of the aforementioned knee buckler, proper thrill a second stuff. Then we had a good 25km into a raging headwind to the line, I tried a little dig but it was more for the TV cameras than anything as the pack was frothing at the gills for a sprint finish and it duly arrived, with La Pomme Marseille’s very affable Benjamin Giraud winning.

I sat at the back in the last 5 km to keep out of the carnage I felt coming, and sure enough in the last 100m I sped past a Drapac guy and an Aisan rider sprawled out over collapsed barriers. The Japanese Aisan rider broke his wrist, pretty nasty fall.

It was the third stage of the Tour (4 in total if you count the last day) with a pointlessly dangerous finish. Why are people who have never raced bikes allowed to design race finishes? How daft is that? 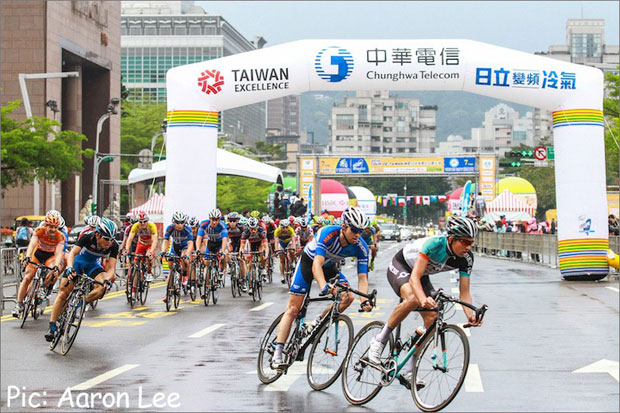 Day 7 trundled along, one of those procession stages that mean very little to the overall race (though the stage winner is always happy), but matter a great deal in other ways, cos they tend to be short criteriums. This one was 55km, so barely over an hour’s work, but nobody wants to crash out on the last day so it’s actually a very nervous and stressful hour and a bit. 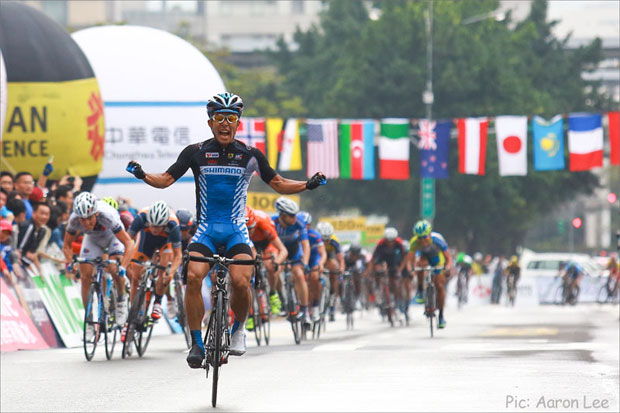 I’m pretty sure Hayato Yoshida of Shimano Racing was happy with his stage win in the final criterium stage.

Despite having gone out the night before to enjoy some of the finer things a major city has to offer (well, we found a happy hour and were in desperate need of a bottle or two of FeelingHumanAgain, so we took the medicine, and I was in 45th place so no fear on the GC), I was feeling good and got into a couple of little breaks here and there but then the heavens opened on a very slippery course with a few cobbles thrown in for good measure. 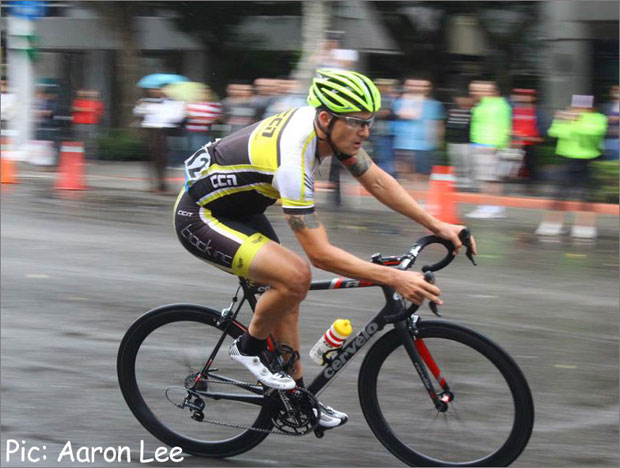 Lap 4 of 6 came along and so did a little bump back to earth for me, my real tire locked on a corner and down I went. The team mechanic jumped from the car with a tire but it was a shattered carbon pedal that was the reason I couldn’t ride, so there was a minute or two of scrambling on the roof of the car as they got the spare bike down.

It’s always amusing to see the team guys going into nervous breakdown territory when you get a puncture, or a mechanical, they jump about with looks of sheer panic on their faces whilst yelling ‘CALMDOWNCALMDOWN!’ repeatedly in all directions.

Anyway, fresh bike under me but with no chance of regaining the pack, me and a Terrenganu guy who seemed to be paralysed with cramp for a moment and lost the peloton just switched off to the line, coming in 4 minutes down. It was kinda cool though as the crowds were really cheering us on, and we got quite a few cool photos from it. 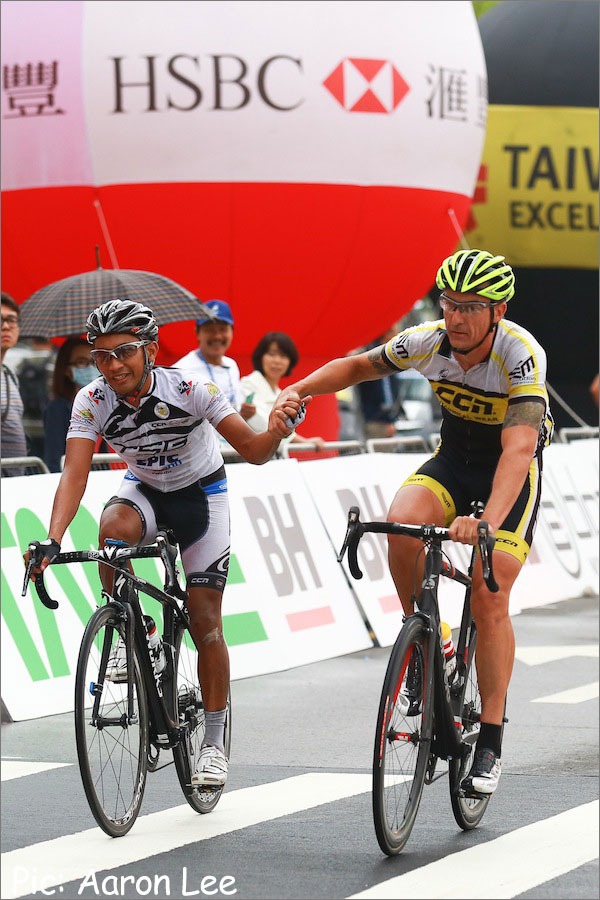 Finishing the stage and tour a few minutes down but happy to have finished.

Yes, I am the original Media Whore. Lay me down and bring it on, dinner first would be nice but it’s not essential…

Really humbling though, speeding along just under the Taipei 101 building on a Sunday morning with people cheering your name from the side of the road. 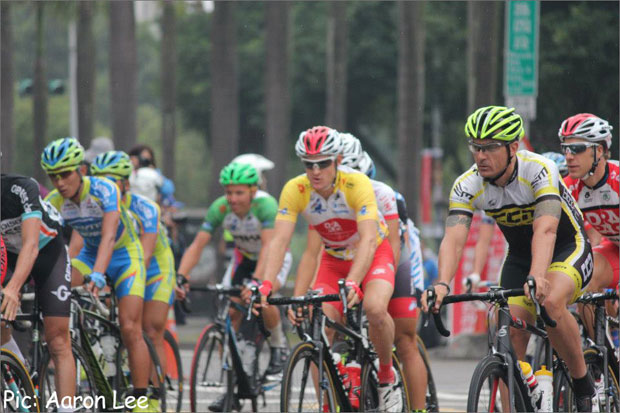 Another good way to get your photo taken? Ride alongside the yellow jersey.

I am though actually starting to get a little tired of road racing. It’s not the bike nor the training, I love all that, not the pain or the sacrifices, because the return in terms of physical fitness and a general sense of well-being is just phenomenal.

It’s not even the racing, I love that too.

It’s just the environment. It’s sometimes a little too toxic. It encourages individualists on the spiky side of rugged and there’s more than a few rampant egos on the loose in the pack and in the team cars. I’ve been bumping up against some of them this past week and it’s not been much fun. Anything but, actually.

But you know what? Tough. This sport isn’t a choice. It’s a necessity. A way of life. For every guy I think has lost his marbles there’s probably two thinking the same of me. It just has to be done. I have to turn those pedals.

In a world where you’d have to be quite insane to never have noticed the futility of it all, here I am racing around on a bicycle with a large group of people who will probably never stop raging into the universe.

Some of them don’t even get it.

They’re oblivious to the absolute wonderfulness of it all.

If you ask me though, it’s just plain old awesome.

I finished in somewhere place but had a smile on my face when I did, and the Tour was won in the end by Bernard Sulzberger of Drapac. Thanks to my sole surviving teammate Yin Chih Wang and our team manager Yves Beau and assistant manager Stanley Sun for their great and tireless efforts. Chapeau, and of course, forza!

Lee Rodgers leads a double life as a pro racer on the UCI race circuit with the CCN Racing Team, competing in the UCI Asia Tour as well as some European events and the likes of the Tour of Qatar and Oman, rubbing shoulders with the best the WorldTour has to offer, whilst keeping up a day job as a cycling journalist. The highlight of his cycling career so far was winning the Singapore National Champs – road race and ITT – as well as claiming the Green Jersey at the 2.1 Tour de Taiwan in 2012, and naturally, writing for PEZ. His writing appears in several magazines and websites and you can catch up with him regularly on his blog, www.crankpunk.com .