A sense of humor is something we value highly at PEZCycling News. (… duh.) Even b.P. (before PEZ), I’d look for my monthly cycling chuckle from Anthony Pope’s Plastic Peloton People, a regular feature in ProCycling magazine. I talked with Anthony, and chuckled some more at his own interpretation of PEZ… 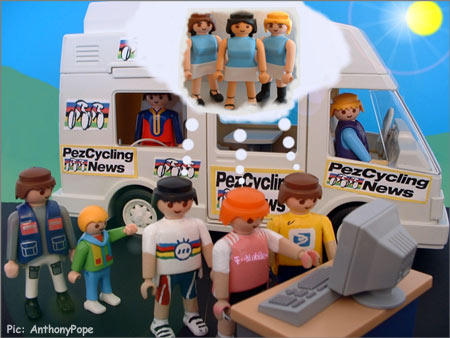 Ths story first appeared on PEZCycling in April 2004.
PEZ: You’re the creator of the famous “Plastic People“ we’ve been reading in ProCycling Magazine for several years. Tell us how you go the idea to create the Plastic People, and how did you go about getting published?

ANTHONY: I had the idea of creating some sort of cartoon but a complete inability to draw was something of a handicap. However, the combination of some plastic cycling figures and a digital camera gave me a way around this problem. Luckily the only cycling magazine I sent the picture off to, Procycling, printed the cartoon. I guess the editor, Jeremy Whittle, must share the same sense of humor as myself.

PEZ: Take us through your process to create one of your vignette’s. Do you generally research an idea thoroughly before you build it, how much creative license do you take with ideas?

ANTHONY: Usually I send off several ideas to the editor but sometimes I get some ideas sent to me from the office. Out of the ideas that I send off, there’s always one that I think might be funny but really difficult to create. Invariably, this one gets chosen. The off-season can be difficult months to think of ideas, and cycling generally is so tough that there is less opportunity for scandal worthy subject matter that is rife in sports such as soccer, for example. Early season can be difficult because it’s sometimes hard to get decent pictures of the new kits. The internet is a useful tool for getting this sort of information. The time taken to paint and set up the scenes varies greatly. Outdoor scenes can be difficult to set up involving lots of propped-up bits of colored card. I’d like to say I produce the pictures in a nice studio with professional lighting but in reality, they all take shape on my coffee table preferably on a sunny day. 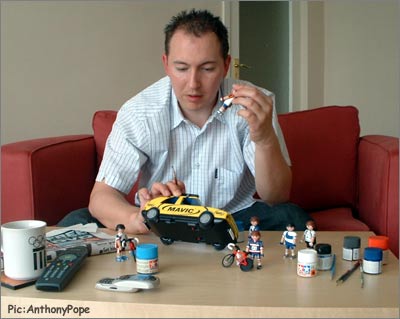 Anthony hard at work in his “artist’s studio”.

PEZ: What happens with the old vignette’s – are they in storage, dismantled?

ANTHONY: Unfortunately, due to space constraints, every thing gets dismantled. The figures get wrapped up in bubble wrap and put away in a box to gather dust. If they’re lucky, they may get pulled out at a later date, but such is the nature of trade teams, jerseys become obsolete pretty quick. The paint on the figures is quite fragile and often needs some re-touching after the pictures have been set up. Bending legs and putting hands onto handlebars causes all sorts of damage.

PEZ: You recently launched your website Secrets Of The Peloton.com – what is the purpose of it and why did you do it? Do you want to take the Plastic Peloton People to the next level – what might that be?

ANTHONY: For every idea that makes it into Procycling, there are many that fall be the wayside. My website is a place where I can get all this stuff out of my head and up onto the internet. Its also serves to present the complete Plastic Peloton People back catalogue which is now into its fourth year.

PEZ: A lot of us have been laughing along with your classic “British” sense of humor – which tends to be much edgier than we’re used to in North America. Do you write the comments that go with your stories – or is that the magazine editor? What other humorous shows, programs, comedy, etc do you watch/ read, what else appeals to you?

ANTHONY: I’ve always watched far too much television. During my formative years, Monty Python always seemed to be on in the house which I found odd rather than funny. The animation in it scared me for some reason and I still find it slightly disturbing. In my teenage years I, as far too many teenage boys do, watched loads of TV comedy sketch shows and spent tedious hours reciting all the lines with my school buddies making out we were all really funny. Wasted time that should have been spent chasing girls. These days I’m a big ‘King of the Hill’ fan. I write the comments that go with the cartoons although the editor sometimes injects his own humor into it, which helps embellish them. I get the same enjoyment out of writing the text as I do producing the picture.

My other interests are Mountains and, oddly, 1st & 2nd World War history but PEZCycling readers don’t want to know about that. I can see their mouse’s hovering over the daily distractions already… 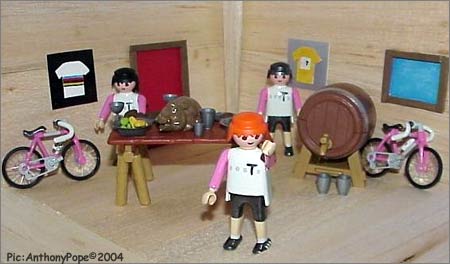 The first cartoon ever produced by Anthony, back in ‘99/2000. Nostalgia buffs will remember when Jan’s worst enemy was his healthy appetite.

PEZ: What about your interest in cycling – tell us your background as a rider racer fan, etc.

ANTHONY: The first Tour De France I saw was the 1987 edition won by Stephen Roche but it was the ’89 Lemond – Fignon race that really caught my attention. I ride around now on an aging Bottecchia in homage of Greg Lemond. In my youth I indulged in the particularly British fascination of Time Trialing. If there was an award for ‘Most Mediocre Rider’ I would have won it hands down. The only two races I ever won were both Hill Climbs, which generally produce small end-of-season fields and therefore give the potential for some cheap victories, which I’m more than happy to take. Living on the South Coast of England, the one-day Classics are only a few hours drive away so I go over the channel and watch them. I’ve developed an uncanny ability to get on television. Since about 2001, I’ve managed a 100% record of seeing myself on television when I get home and watch what I’ve recorded. It never fails to amuse me. Out of the current riders, Armstrong is my favorite as he’s taken cycling up to the next level, just as Greg Lemond did in the 80’s, and cycling needs riders capable of being worldwide sporting icons if the sport is to progress. He’s also an out-and-out winner, which is something that scores highly in my books.

PEZ: Are there any riders you stay away from intentionally in your vignettes?

ANTHONY: I celebrated the passing of the Mapei team as their intricate jerseys were always a nightmare to create. Pantani gave me some great ideas but his bald head caused no end of problems. For similar reasons, I’m monitoring the progress of Levi Leipheimer closely. Jan Ullrich is a particular favorite. Being ginger (that’s red-haired to you, Hank – ed.), he’s very distinguishable amongst all the others. His weight has always been an issue although in the generic world of Playmobil, obesity isn’t an issue as everybody looks healthy and lean.

PEZ: Do you have a regular job?

ANTHONY: I work for local Government in the waste management department implementing improvements in the way we collect refuse and recycle our waste. My job title of ‘Performance & Service Development Officer’ is one of those posts that have tax payers wondering if their money is being spent in the right way. I like to think it is most of the time, although I am writing this at my desk right now.

PEZ: What would you ultimately like to be doing in life?

ANTHONY: Retire early (30ish), buy a house on the Kwaremont, put my feet up on the sofa after a nice, brisk morning ride around Flanders (classic Belgium weather optional) doze all afternoon in front of the televsion. Ahhh, simple pleasures.

PEZ: What does your better half think of your Plastic Peloton People?

ANTHONY: My girlfriend, Claire, gave my first Playmobil cyclist as a joke present. Now the joke’s firmly on her as about once a month, our apartment is taken over with plastic toys and I have to forgo going out socializing in favor of recreating the professional peloton in miniature. Whilst she seems willing to put up with this, she is getting less patient with our trips to France which turn into trips to Belgium to stand at the side of the road, watch a race pass by, before visiting some WW1 battlefields on the way home. I keep telling her Paris is overrated as a tourist destination as it’s important to look beyond the usual destinations, but I think she’s probably seen enough of the Somme now.

PEZ: Would you do commissioned work for readers and fans? How can they contact you if interested?

ANTHONY: If there’s some sort of scene or particular jersey someone would like created I’d be more than happy to give it a go although, just as with the professional peloton, their are plenty of jerseys that I’d avoid painting for fear of being ‘found out’! Also, the numerous shortcomings in the painting process get lots of cleaning up at the computer stage. I’m contactable via the website.

You can see Anthony’s uniquely British sense of humour played out each month in glorious Playmobil figurines in ProCycling magazine.

You can also see his work on the web at SecretsOfThePeloton.com