TEAM COAST SUSPENDED, RIDERS WALKING…
Team Coast has been suspended by UCI because the German team still didn’t resolve the financial problems of last year. So the team couldn’t take part at the last Paris-Nice. Two riders of Team Coast are thinking about leaving the German team: Jan Ullrich and Alex Zulle. Jan sent an ultimatum asking to receive the pay in 2 weeks or he will leave the team and the Zulle got already a meeting with CSC’s manager Bjarne Rjis to talk about a possible change of team in this first part of the season. The Swiss champion will retire at the end of this year.

SANREMO – “Oh, We’ve Just Had A cancellation…”
With the apparent demise of Coast comes an opportunity for some other team lucky enough to pay it’s bills. There’s now an opening on the start line for the 1st World Cup race. Names being bandied around inlcude Pantani’s Mercatone Uno – Scanavivo outfit, but it seems that it will be another TT1 team.

FASSA – “Oh, We’ve Got An Opening For Sprinter”
Many Fassa’s riders are down with the flu. Dario Frigo left Paris-Nice before the end of the race, and it seems that also Petacchi isn’t in a good condition lately because of a cold. So all the eyes are on “Pippo” Pozzato, the young italian sprinter. He’s shown great condition lately and he seems the only one that can replace the other captains. At Milan- Sanremo there will be also the come back of Michele Bartoli at the races, after his accident in Spain during a training in February.

TIRRENO-ADRIATICO – Stage 5
Marzoli (Alessio) today won the 5th stage in the sprint, after that the group caught Antonio Flecha (iBanesto.com) just 1 km from the end. Bettini today was suffering from a fever but he wanted to try to finish the race and…he’s still the leader. Marzoli will be with Ruslan Ivanov the road captain for the “classicissima” for the team
Alessio. 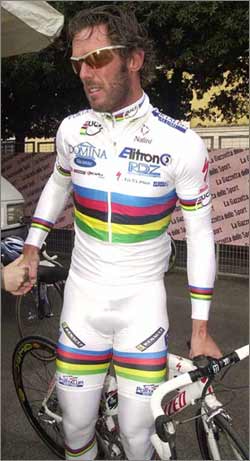 SUPER MARIO SUPER
Today the Tirreno’s stage was a bit hilly and so Cipollini arrived late, in the 2nd main group. But he’s won 2 stages in just 3 days and he said “I’ve already be
winner for 2 times this year, instead of last year at the same time, when I won just 1 race”. He didn’t show a super condition especially on hill but everybody knows that he’ll be the stronger next Saturday.