Michele Tomasi submits today’s latest from Italia and around the continent. Here’s the poop on Pantani, Pozzato, words form Ballerini, and race news from Coppi & Bartali and the Giro… 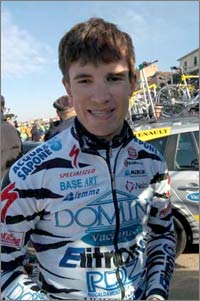 2nd stage of “Settimana di Coppi & Bartali” to Kolobnev
The young rider of Domina Vacanze Elitron, Alexander Kolobnev, won the longest stage of Settimana di Coppi & Bartali at the sprint on Celestino (Saeco) and Pellizzotti (Alessio). “I’m really happy for this victory, I really wanted it, and I must say thanks to Scarponi who helped me in the final. I made the selection on the hill of Casale and then I earned some seconds on the downhill. Behind the group was running really fast.
Then many riders came back, and we started to work together. At the sprint, the first to go was Mirko Celestino, and as I knew he was the faster, I took his wheel: at 30 metres from the finish, I sprinted with all my power and I got my first victory as pro rider. My mum Lyubou yesterday morning sent me an email, and she said that I was going to win today. This victory is for her, and for my team manager Pino Petito who has been
near to me in this time” .

Pantani’s back!
Good performance for the “pirata”. As yesterday he has been often ahead, and he made his team work for about all the stage. He still doesn’t have the best legs, but he seems finally in the good way for come back to win. In the final he arrived 14th, by escaping with a little group of riders.

Pantani’s new look!!!
Maybe not all the people noticed, but…he got a new look this year. Next time when you’ll have the chance, try to watch his ears and his nose: you’ll notice some little
differences. Last winter he did some little surgery. Is it this the secret for his come back?

No Flanders for Pozzato
After the many victory in this first part of the season, the young italian cyclist won take part at his first Tour de Flanders. At last Milano-Sanremo he crashed and he had a little problem at one leg, so he needs to rest to recover quickly.

Ballerini talking…
..about Pantani: “He just needs to think to run. It’s 300 days that he hasn’t been racing,
but I think that now he knows what he needs” .
..about the helmet: “Cycling is a dangerous sport for sure as many other sports, but the security for the riders is growing every year. Lately the 90% of the cyclists use the helmet, and in the last 50kms the number is bigger. That’s important” .
..about doping: “I think that to beat doping we must start to teach the guys in the young age, and not by showing some shocking videos or photos”.

Museeuw come back to train
Johan Museeuw, the Lion of Flanders, came back to train after the bad accident at Dwars Door Vlaanderen Waregem. Today the staff of Quick Step with Johan, will decide the programs for the training and the next races.

Pantani won’t take part at next Tour de France!
No kidding…! Jean Marie Leblanc says no to Pantani and at his team, but it seems that there will be Mario Cipollini, the world champion. “there aren’t reason for think that Mario Cipollini won’t have a place at Tour de France”, says Leblanc, “about Pantani, he run in a TT2,
and we take only TT1. I don’t have any other thing to say”.

Giro d’Italia News
Team Fakta and CCC Atlas-Polsat will take part at next edition of Giro d’Italia. The Danish team has been really glad for this news, “we have some italian sponsor and of course for them it’s a good news” says the team manager, “and we will take part only at Amstel Gold Race as World Cup, and so our riders will be glad to prepare for a so important 3 weeks stage race. About the polish team, it’s sure that there will be the “ever present” Pavel Tonkov, also today at the attack at Settimana di Coppi & Bartali.