Regardless of where the action is, you can count on the Italians to have their 2 cents say – as we pic up the latest on Casagrande riding in snow, Bartoli recovering from Flanders, Cipo talks some trash, and even some non-Itals like Ullrich, Camenzind, and Rodriguez… 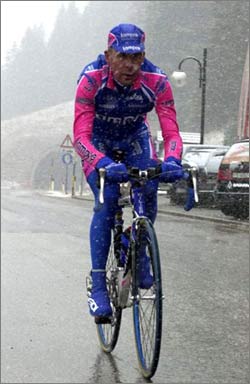 Casagrande Rides the Pampeago
Rain, Cold and also snow in the final kilometres. The test ride done on Wednesday 2 April on Alpe di Pampeago, Francesco Casagrande and Wladimir Belli and the other riders from Lampre, Bertoletti and Piccoli, tried the climb that they will be riding on the 24th May as the final climb to the finish of the 14th stage of this years Giro d’Italia.Francesco Casagrande says the climb “is incredibly difficult and should make a big difference in the overal general classification at this years Giro, he remembers the section of the climb of Malga Ciapela della Marmolada”.

The two diamonds of Lampre rode the climb using a gear ratio of 39×25 in the last 4 kilometres. The riders day started with the ride of the Time Trial of Merano in Bolzano which takes place on the 25 May on the 15th stage. The rain and the traffic limited the riders to riding the complete circuit but managed to get 20km of the ride under there belt, which seemed to be enough for Casagrande to get a precise “idea of the course, it is a specialists Time Trial commented Casagrande, more for riders like Frigo and Gonzales, even though the two small climbs with gradients of 8-9% in them does break the rythm a little”.

Bartoli Out of Ghent-Wevelgem
Michele Bartoli won’t take part at tomorrow’s Ghent, as he wants to recover from the Tour de Flanders. He will come back at the Amstel Gold Race. Fassa will have as leaders tomorrow Sergei Ivanov and the Super Baby, Filippo Pozzato.

Camenzid Out of Competition
The Swiss rider, Oscar Camenzid, must take a 3 weeks off after crashing at the Tour de Flanders. He got a serious problem with his backbone, and he’s already back in Swiss for treatment.

Ullrich Returns
Finally the German rider, Jan Ullrich, will come back to racing, after a long stop of about 1 year. Yesterday he got the license from UCI to start today the Tour de Sarthe, in France. Last race for the Team Coast’s rider has been the Tour de Qatar 2002.

Heavy words from Cipollini to his…”mates”
“I saw riders trying to go away from a far distance, little groups trying to escape. Today there were just 2 riders to control, and one won the race: Im talking about Van Petegem, the winner, and Johan Museeuw, who has sick”. That’s what he said after his leaving for intestinal problems. “It’s funny because it seemed that some guys wanted to teach the Belgian. Anyway I’m afraid of my conditions at last Flanders, also because I could have fun at that race. I could wait for the mistake of the others”. But he’s already thinking at next race, and he will start with the number 1: “Ghent-Wevelgem is totally different, but if I’ll feel badly, it’s possible that I’ll come back to Italy with the first airplane. Last year it has been a special Ghent, and of course it would be nice to win the 4th” .

Luis Perez Rodriguez to Cofidis
After Alex Zulle, also another rider left the German Team Coast. I’m talking about Luis Perez, 32 years old, Spanish and a good climber. He arrived 2nd in 2 stages at Vuelta de Espana 2002. He will replace Andrei Kivilev even if, as he said, “it’s impossible to
replace him”.