One name which caught our eye among the seven hardy souls who had the temerity to ignore The Shack, Cannondale, Lotto and QuickStep’s power struggles was that of Garmin’s 22 year-old from Portland, Oregon, Jacob Rathe. Rathe’s name first appeared on the radar as silver medalist in the US debutant’s cyclo-cross championship in 2006. In 2008 he pops up again as a bronze medallist in the US team sprint championship. In 2009 the big results began to appear with a stage win in the Junior Regio Tour in Germany. 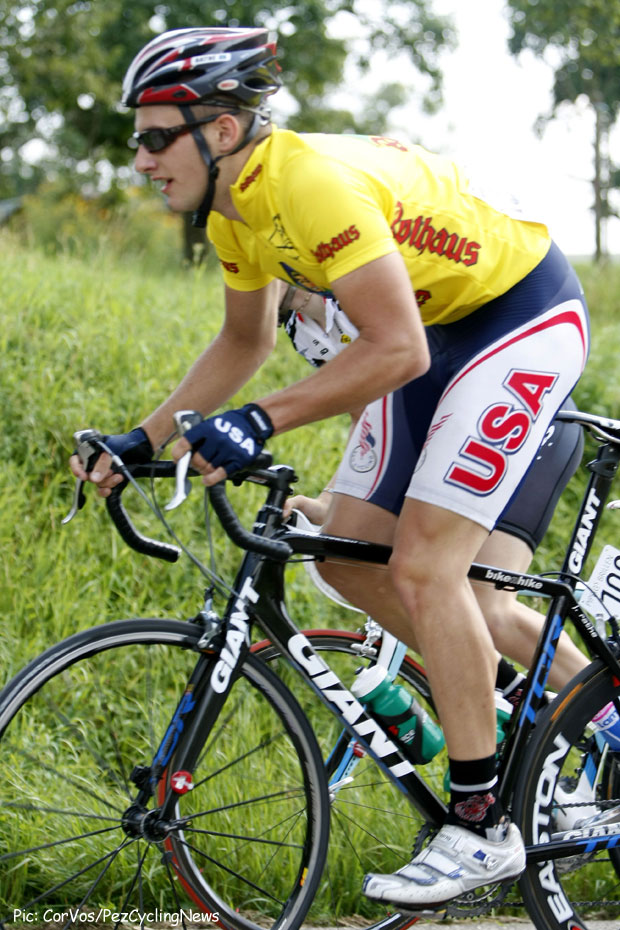 Jacob’s stage win in 2009 also gave him the yellow jersey.

The following season he was with US pro team, Jelly Belly and riding a programme which included the Tour of China. In 2011 the name on the jersey was Chipotle and there was a stage win in the Rutas de America in Uruguay, third places in the U23 Paris-Roubaix and Pan Am U23 TT champs, not to mention a stage win in that wildest of stage races, the Volta a Portugal. Last season saw promotion from the Chipotle ‘feeder team’ to Garmin and the World Tour; and a share in TTT wins in Qatar and Utah.

This season he’s well into a chilly, tough Euro-Programme; but he took time to speak to PEZ on the eve of the Scheldeprijs – where he would finish 01:55 behind winner Marcel Kittel (Germany & Argos).

PEZ: Your second ride in de Ronde, Jacob.
Yeah, the opposite of last year; they let the big break go early and then QuickStep controlled things for Boonen. This year it was very aggressive in the first couple of hours; it took 80 kilometres until the break went.

PEZ: What was the Garmin tactic for de Ronde?
We’ve not had a stellar year in the Classics (but Dan Martin did of course triumph in the Tour of Catalonia, ed.) so the thinking was that good things come to those who are aggressive – we had Johan Vansummeren and Tyler Farrar as leaders.

PEZ: How have you been dealing with the cold?
It’s something we’ve all had to deal with – to dress appropriately is very important but you have to be careful not to wear too much, either. The weather at Flanders is always a challenge.

PEZ: The race started very fast.
It was a cross/tail wind at the start then the wind was variable – it made for an extremely aggressive early part of the race. It’s important to have guys ahead of the race for your team leaders to come up to – and it’s safer in the break, it’s very dangerous in the peloton.

PEZ: But you couldn’t get the elastic to snap.
It’s typical in races now; before you’d get in the early break and be gone all day. But the break in Flanders went so late that it was hard to gain time because the peloton was beginning a natural acceleration into the first of the climbs.

PEZ: How was cooperation in the break?
It was good when there were just seven of us in it, but when the five bridged up and it became 12 it wasn’t so good because you had more than one guy there from different teams and other guys started to miss spells. 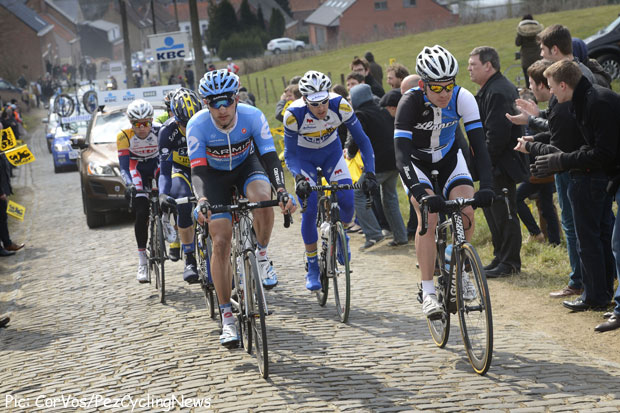 In the break at Flanders

PEZ: You ended up DNF.
Yeah, I had to try hard for 80 K to get in the break and then I was working in the break – when we were caught I was pretty much done.

PEZ: Johan Vansummeren was your best in 20th place.
He wasn’t happy with the placing but we were happy that the team worked as a cohesive unit – 20th isn’t excellent but it’s a placing you can be content with.

PEZ: Scheldeprijs and Paris-Roubaix next?
Yes, I know what to expect in Paris-Roubaix, I was on the podium in the U23 race. I enjoy the northern European races, they’re exhilarating and intense – it’s real bike racing. You can’t win by mistake, you need the bike handling skills and fitness – but you have to be smart, too.

PEZ: How was the step up from Chipotle to Garmin?
Some races were a shock to the system but I’d ridden UCi 2.1 races like the Volta a Portugal, so they were a stepping stone and I knew what to expect. But the thing about the World Tour is that in all of the races you ride, all the guys are very experienced and at a very high level. 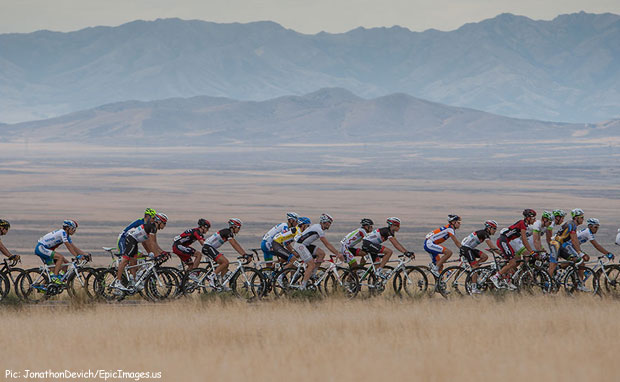 The 2012 Tour of Utah was one of Jacob’s big challenges in his first year at Garmin where he helped the team earn a TTT win and defend Vandevelde’s yellow jeresey for a few days.

PEZ: And you’re a Girona man, now?
I really enjoy it, I like where I live in Portland and I didn’t know anything about Girona. But it’s a fantastic town with great weather for training.

PEZ: Do you get much say in your race programme?
I had hoped to ride the Giro but I broke my hand in a crash in Paris-Nice so the season hasn’t gone as well as I would have liked. At my level generally you don’t get a lot of say in what you ride, usually it’s; “this is what you’re doing.”

PEZ: What are you looking for from 2013?
I’d like to see myself move forward – to be in the break in Flanders was good progress. It’s my favourite race and it’s not easy to get up the road, so that was positive. There are other races that I like that I’d like to do well in – the Vattenfall in Hamburg is one; and I like the Tour of Denmark. I like races with parcours which give you the opportunity to get in the break – I like those tactical situations . . .

# Prooving his ability to get in beaks, Jacob again made the 13 man move in Paris-Roubaix on Sunday but a paranoid Shack-driven peloton gave them no room to manoeuvre and their lead never reached even one minute.  Keep your eyes peeled for Jacob in more moves soon.#