Race Report: The King of Flanders, Tom Boonen, took a record third win in 2014 Kuurne-Brussels-Kuurne outpacing young Dutch hope Moreno Hofland in a small group finish. That Boonen won wasn’t a surprise; the anticipation was in trying to figure just how the sprint would play out: five OPQS guys versus three for Belkin and two interlopers.

In the end, it was probably that two-man advantage that meant Boonen’s ride was easier to the line. More cards to play and more horsepower for the lead-out, even when Trentin was dropped as the line approached. 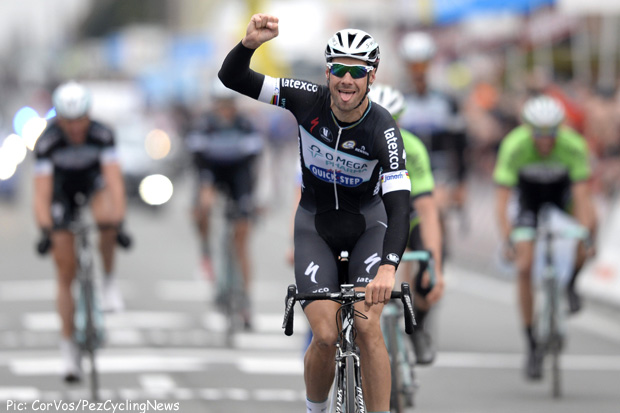 How It Started
The first hour was a tooth-and-nail domestic squabble, the peloton not wanting the escape to march out the door. Eventually, a foursome stomped away and distanced themselves: BMC’s Silvan Dillier, a Tour of Alberta stage winner last year; Michael Vingerling from the 3M squad; Katusha’s Vladimir Isaychev; and the heavy metal-styled umlaut hoarder Gert Jõeäär for Cofidis.

Yesterday, Greg Van Avermaet resembled a disorientated Polar explorer, one glove lost on his journey, as he grimaced towards his frozen destination. Although the weather today was cold, it wasn’t as brutal. For racing fans, however, the chill March air is still the right backdrop for a beautiful odyssey, with a course of evocative place names where heroes and heroines have conquered or fallen. Harelbeke, Kaster, Kerkhove, Oudenaarde, Edelare, Geraardsbergen, Ronse, Kluisbergen, and Nokere all lie between fame and despair.

It’s around a three minute gap at the feedzone and the breakaways continue to play together nicely. Lotto-Belisol are working for Greipel, and they start to cut into the lead appraoching climb #2, La Houppe.

Taylor Phinney is a big-name faller around halfway; like Hushovd yesterday, it’s sadly race over and off to hospital for checks as BMC suffer another blow.

Belkin come to the fore. They give the race a hammering, and suddenly it is really starting to hurt the peloton. The four escapees have now only a minute at 75kms left as tired legs from yesterday start to burn.

Omega Pharma-QuickStep are up for it after a poor day in Het Nieuwsblad and start to split it up again; our brave quartet up front (Vingerling, Jõeäär, Isaychev and Dillier) have just over a minute approaching the Tiegemberg.

OPQS pull a group clear, and sweep up the early breakaways, with 66kms to go. Suddenly, the race is blown apart as Boonen’s boys decide on an open-road pursuit effort. 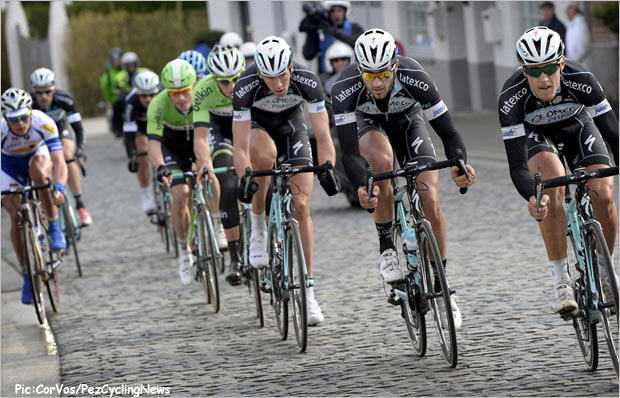 Boonen’s boys drove the break, and it was game over for the rest.

37kms left, and the elite escape has just under sixty seconds. Sky and Katusha are working with IAM Cycling to try and haul things back together, but the chase is shambolic as they hit the finish line with two finishing circuits to race. Christian Knees is shouting at Luca Paolini for going too fast.

The OPQS/Belkin collaboration is firing on all cylinders up front, but the chase is looking toothless. They make no inroads of any note. Boonen and co sweep through 20kms to race, and the gap is an even minute.

16kms to go and the bell tolls as the escape rolls through in military formation; FDJ have emerged to chase for Arnaud Demare. Maybe they haven’t left it too late, but they need to pull the collective finger out.

Omega Pharma and Belkin are working hard, taking no chances. Van Summeren rolls through, but what can he do as a solo warrior? 10 clicks left and the advantage is up to 1’10”.

Vandenbergh comes to the front approaching 7kms to go, and he’s so big that the rest of the escape group – lined-out behind him – disappear from sight.

6kms to go, and the leaders sweep through a roundabout; there are little gaps between wheels, as Van Summeren has a look around to see what’s happening. Can anyone disrail the OPQS train?

3.7kms to go: Belkin strike first as Wijnants jumps. Vandenbergh closes it up. Everyone slows down and Vandenbergh keeps going … why not? Belkin have to close it now. Trentin is dropped so Boonen has lost a lead-out man.

Laatste kilometer, and it’s nine men to fight it out. Belkin looking for Hofland; OPQS for Boonen. It’s a headwind for the finishing straight. Van Summeren jumps but Maes closes it. The sprint is a bit wild and woolly, riders wobbling all over the road.

Boonen has Hofland on his wheel as Vandenbergh opens it. Boonen launches himself with 200 meters left and Hofland closes on his left, closes, closes … but not enough. A regal fist pump from Boonen and he takes Kuurne-Brussel-Kuurne for a third time in fine style. 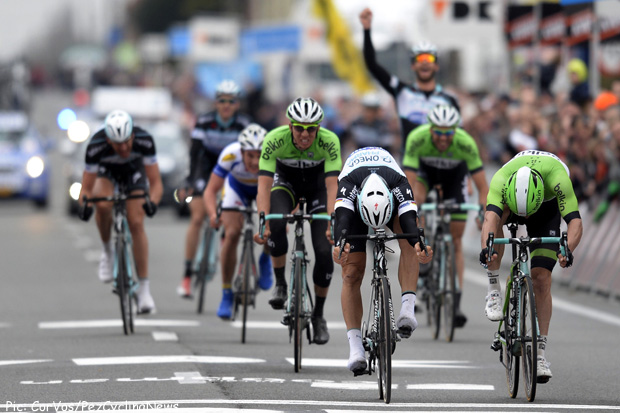 Good to see Hofland close and Vanmarcke in form. Also Lampaert showing a lot of promise in fourth.

The peloton comes home almost a minute-and-a-half down to round off a cracking weekend of racing as the northern European season gets going. Keep it Pez for Ed Hood’s roadside report from KBK, Omloop and more.

Olga Zabelinskaya third in queen stage, retains the lead in the general standings