Lee’s Lowdown: I guess it was too good to last, but let’s hope that this was just a blip and that Liege-Bastogne-Liege continues the otherwise sparkling Spring Classics season that we’ve been treated to, because yesterday’s La Fleche was about as much fun as having 500 grains of sand stuffed under each eyeball – individual grain by intolerable grain.

Despite the enticingly Latin flavor of the top three (I’ll let the inherent stereotypes woven into ‘enticingly Latin’ work themselves into your brain, but if you’re hearing ‘Ole!’, tasting the tequila kickback and seeing some stone-jawed matador striking the bull’s heart, it worked), it was a decidedly protestant kind of a race really, with everyone seemingly terribly polite and all watching their Ps and their Qs.

If this had been a lovers’ tryst it wouldn’t exactly have been swinging from the chandelier and all niceties abandoned to the wind, a la Amstel Gold, but more a romanceless missionary mangling with plenty of fumbling in the dark – and with two prophylactics on just in case, just for good measure. 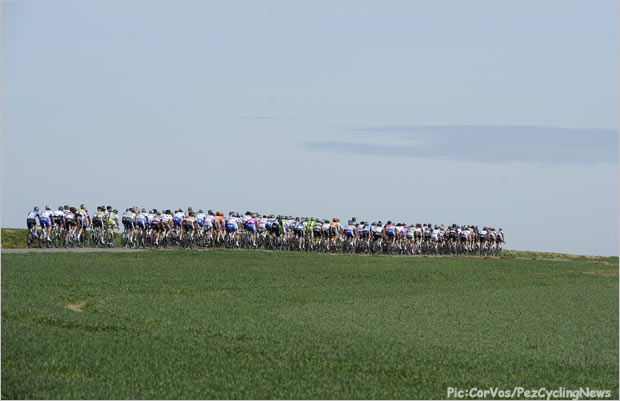 Or was it? That’s how it looked on the surface but, as ever, there were other narratives going on just below, driven by dreams and fears, aspirations and exasperations.

The most obvious of these of course was the increasingly worn piece of yarn that belongs to our current World Champion, BMC’s Philippe Gilbert. His reflections after the race:

“It was a fast race and the team controlled it well and rode very strongly today,” Gilbert said. “It is always sad not to win, but I tried. A perfect race should be when I win. I am still missing a few percentages to win. When you are a favorite, you win when you are on your best level. I am gaining every day in my condition and we will see what Liege brings.” 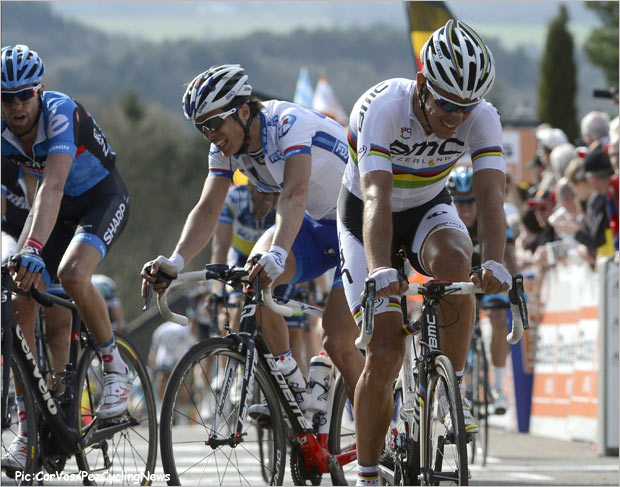 Not quite the Gilbert of 2010-2011 season but then if you had that kind of form that he kept over several months for even one single day, you’d never complain again for the rest of your life. He was phenomenal then, and still is great now, it’s just that well, y’know, he has those hoops on and all.

Curse of the Rainbow? Unless that is in his head, I’d venture no, but there is no doubt an additional pressure whilst wearing that beautiful jersey, but it seems more likely that he’s still suffering a little from switching to BMC in 2012 and following too closely their training schedule.

Gilbert is known for riding without even a computer in training and has had no coach for years, and I think that could be still affecting him, trying to fit in too much too early with his then new squad. It is almost a year and a half since he joined but at this level, these slight changes can have massive reverberations.
But about his team: one reason the race looked a bit boring but actually was interesting was the way BMC rode. There was a tangible air of desperation in their every pedal turn as they worked to make sure no one in the break ‘did a Kreuziger’ and slipped away. In that you could see not only the team’s desire to work but also Gilbert’s anxiety. 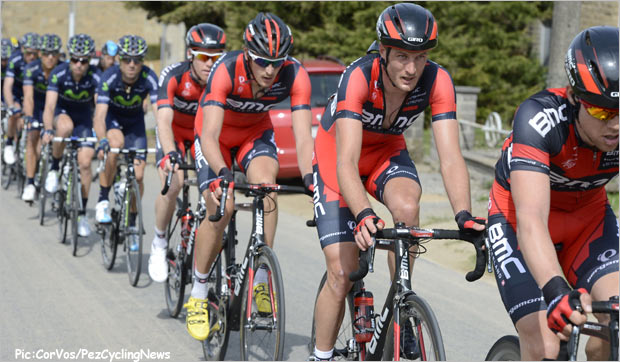 BMC is stronger across the board than his previous team, but could that be subtly changing how Gilbert approaches races, and how he is finishing? Possibly. Did they need to chase so hard from so far out? No. Last week’s result at Amstel, not to take anything from Kreuziger, was a bit of an anomaly, as usually it all comes back. I think it would have here too, as the final hill offers many guys a chance for the win, so more would have worked.

Yesterday we saw Sagan again suffering not only from tiredness but also from the unrealistic expectations. The Mur is not his kind of climb. I’m inclined to think that this is all actually good for us, if not exactly him. What I mean by that is, to Peter Sagan yesterday was probably a good ride, and he’s probably not that fussed that he ran out of steam 80 meters from the top.

He knows where and how he can win and actually has, a lot, so who cares? He probably doesn’t give a flip.

It’s good for us though, by which I mean the fans, to see that he is in fact human. He’s something, this kid, but he ain’t everything. Not yet, anyway.

I thought Betancur put in a storming ride and, had he gone 75 meters later might have won. But he didn’t. (Just thought I’d point out the obvious there). Henao’s finish too was very good, and Dan Martin put in a good effort also, though he, unlike Betancur, left it a little late (though Martin did suffer a puncture with 21km to go). 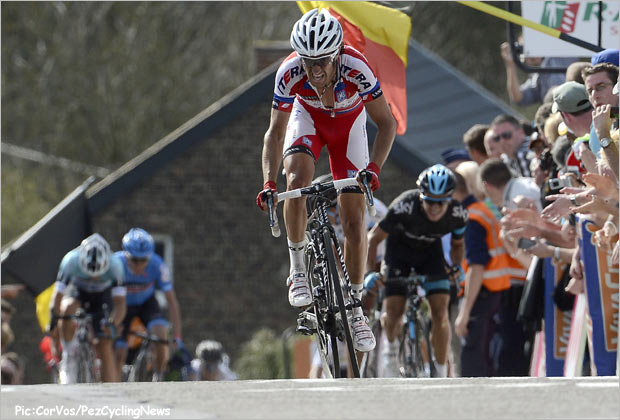 Ride of the day? Has to be the combination of Joaquim ‘Purito’ Rodriguez, in playing the role of favorite that freed up Moreno, the eventual winner, to take home his biggest victory to date, and of course Moreno himself.

The night before every race the riders gather in the manager’s room and the talk goes on about who will do what and how they can win, but the fact is that the blueprint only actually plays out about 1 in a thousand races.

Great riders adapt to the ever-changing circumstances in a split second, on the road, and we saw that yesterday. Rodriguez was probably joint-favorite for the win with Gilbert but, knowing his legs weren’t tip-top, he deferred to Moreno.

“Purito wasn’t at his top shape due to the crash in Amstel Gold Race, and we’ve already talked about doing a joint race until the end. I knew I was in a great shape instead: Joaquim, in fact, predicted I would win today.

“I felt good and Purito worked for me. Betancur tried from a long attack and he made it difficult for us.”

Moreno had this one, great chance to win a classic and he took it. It was an example of years of waiting in preparation for that very moment, and to have the cool to take it so ruthlessly was anything but boring.

“I’ll just take advantage of the chances I’ll have, just like today,” he said, smiling from ear to ear.