It couldn’t go on – had the frantic dog fights of the first four days of the Vuelta continued then no one would have made it to Madrid. The last three days saw surprise wins across stages supposedly built for the sprinters’ – Ed Hood takes a quick recap.

Stage Five took us back to a ‘proper’ sprint stage with a break just missing out then a mass charge for the line. And there’s always a break through win for an up and coming sprinter. For Cav it was the 2007 Scheldeprijs when he beat Robbie McEwen – I well remember my eyebrows lifting when I heard that result. 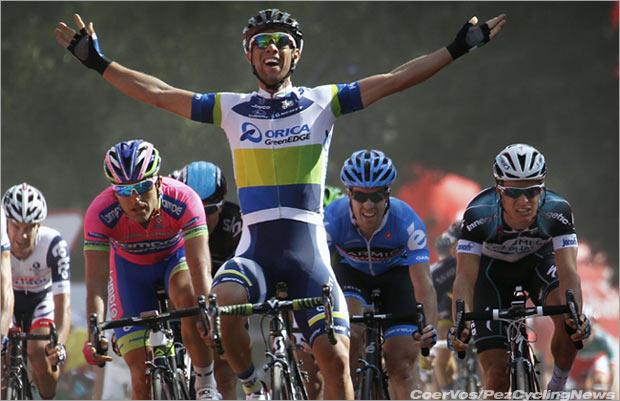 For Michael Matthews it came on Stage Five of this 2013 Vuelta – whilst the GreenEdge Australian was world U23 champion back in 2010 and has won stages in Utah in 2012 and 13, a stage in the Vuelta a Murcia in 2011, the Clasica de Almeria in 2012 and the Rund um Koln in 2011 – a Grand Tour stage is at an altogether different level.

And whilst there’s no such thing as a ‘lucky’ stage win at this level and you can only beat who’s there, Matthews is fortunate that the world’s best sprinters are all absent. There’s no Cavendish, Greipel, Kittel, Sagan or the ‘new wave’ of French sprinters – Bouhanni, Coquard and Demare – signing on in the morning.

In second spot was Lampre’s Maximiliano Richeze, the Argentinean had some respectable results in Europe his first time around during the four years when he rode for the second division Italian Navigare team. But the real reason he’s with Lampre for 2013 is the big haul of points he brought with him from the UCi Asian and Americas Tours whilst riding for Team Nippo in 2012. He took 16 wins in 2012 so deserves respect but whilst he’s a big beast – he’s no Gorille.

And it was good to see GreenEdge riding for their man early, instead of capitalizing on other teams’ hard work. 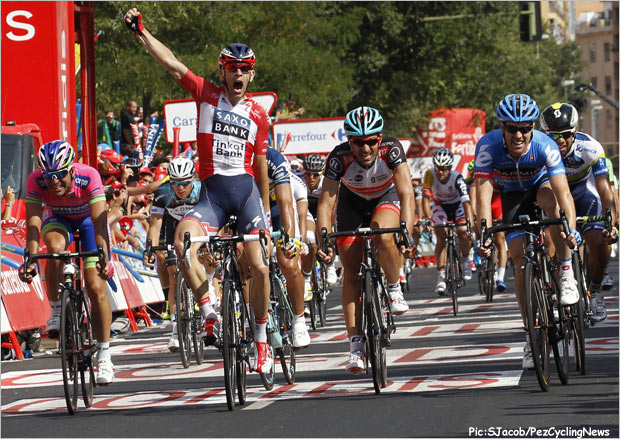 Stage Six and there were two stars of the show – QuickStep’s World Time Trial Champion Tony Martin spent the entire stage solo off the front, only swamped within spitting distance of the line. I’m pretty sure that if his chrono rival, Fabian Cancellara (Radio Shack) hadn’t launched a massive charge in the finishing straight the German would have pulled off one of the Grand Tours’ greatest ever stage wins. It looked awful like Fabian was thinking; ‘anyone but him!’ to win – although the big Suisse would never admit to that.

When Michael Morkov and Alex Rasmussen were burning up the boards as World Madison Champions they were the classic pairing – the sprinter and the ‘stayer’ – with Rasmussen’s physical style providing the finishing speed. But there was one night on the Gent boards where the way the race played out it was Michael who had to do the sprinting.

I can’t remember who was in the lead but it looked as if the race was won – the Dane raised himself off the saddle and attacked from the back straight, streaked round the banking like an arrow, catching his man on the line and taking the win.

‘Wow!’ I said to him when I pulled him in off the track; ‘you liked that?’ he said as he gave me a wink. Ever since then I’ve been aware that he’s seriously quick – but quick is one thing, having a dedicated lead out train and being happy to get involved in the crazy physicality of bunch sprints is another.

But Stage Six was no conventional bunch sprint, just a Cancellara-lead drag race to the line with no time for tactics. Morkov judged it perfectly, going with his Swiss ex-team mate and timing his sprint perfectly to land his second major victory of the year.

Last season he was one of the ‘Men of the Northern Classics’ seemingly in every break and never far from the action. He followed that with a brilliant spell in polka dots in the Tour and a headline grabbing massive solo break on the anniversary of his father’s death. This year his spring lacked the same ‘zing’ and there was no Tour ride.

But a win in the Danish Elite Road Race Championship and then a Grand Tour stage win with that lovely jersey on his back have transformed his season – and have completed his metamorphosis from world class track man to world class road man. 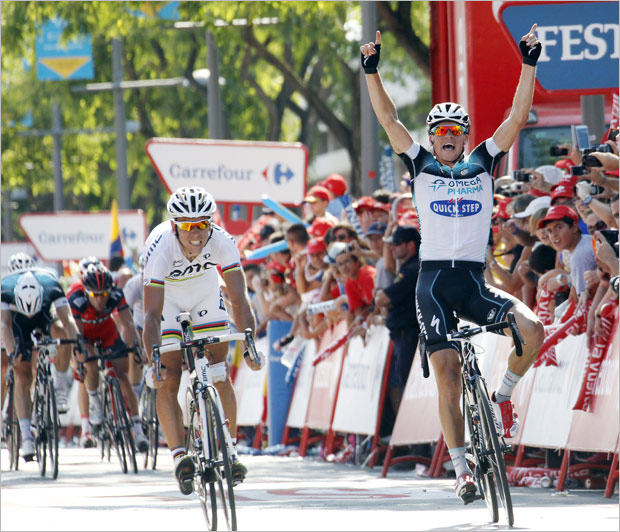 The final day of calm before the storms which begin on Saturday on the Alto Penas Blancas saw another man who, like Morkov, has successfully changed disciplines take the spoils. Zdenek Stybar (QuickStep & Czech Republic), along with Sven Nys dominated cyclo-cross for half a decade. During that time he won two world titles and just about everything else there is to win in the world of mud and ice.

But there were always signs that he was a more than capable road man, taking stages in the Tour of the Pyrenees and Volta Ciclista a Llieda whilst riding for his Belgian Fidea team as part of their build up for the winter. But it was last season where he really began to catch the eye as a road rider with stage wins in the Four Days of Dunkirk and Tour of Poland.

Season 2013 saw him start by defending his Czech ‘cross title but the emphasis was 100% road from there on in was road. There was a share in the QuickStep TTT win in Tirreno and then a heart breaking collision with a spectator in Paris Roubaix when he was with Cancellara and a podium seemed eminently possible.

But if there were any doubts about his quality on the road then they were dispelled in the very hard fought Eneco Tour where he took two stage wins and the GC to change his label from ‘coming man’ to well and truly ‘arrived.’

Stybar slipped away with world champion Phil Gilbert (BMC & Belgium) at the end of Stage Seven, played poker best in the finale when the wily Belgian tried to ease him to the front and then held off the man in the rainbow jersey by millimetres to win. Gilbert must be hoping he can grab at least one win before his tenure in that stunning all white strip runs out – or maybe he plans to hang on to it in Florence? 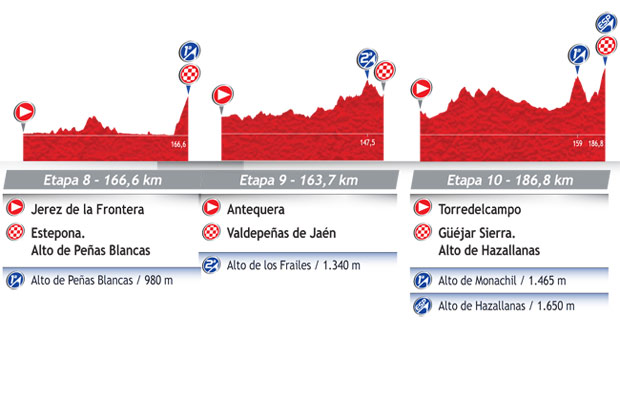 The Gathering Storm
But all the heroics, speed and drama of the last three days of reasonably benign parcours in this anti gravity Vuelta will be forgotten when the flag drops on Saturday.

There are 170 kilometres from the ‘Sherry Capital’ of Jerez de la Frontera via the ‘white villages’ of Andalucía to the summit of Alto Penas Blancas, an 11 kilometre brute. Sunday is more of the same with 174 k from Antequera to the top of Valdepenas de Jaen with it’s 20% ramps. And there’s no Monday rest day – just 176 K from Torreldelcampo to the summit of Alto Hazallanas with five of it’s seven K at 11% average.

A brutal three days – have a last look at the GC, by Monday night it’ll look a whole lot different.