Over the last several years the world has come to know the special story of Lance Armstrong, but long before Tour de France glory was a plan to spread awareness and fight cancer. A simple ride along Lance’s favorite training routes would help raise money and would be symbolized by a bouquet of roses – the Ride For The Roses.

Fast forward 8 years and the Lance Armstrong Foundations (LAF) annual Ride for the Roses has become bigger than fund raising or awareness. “It’s grown because there are so many cancer survivors out there and it gives hope to so many people,” said LAF regional mentor Jerry Kelly. 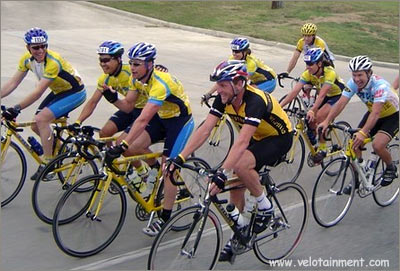 The 2004 edition of the event officially kicked off October 15, with a whirlwind of private events for top fund-raisers like rides, dinners and autograph sessions with Armstrong. It is a rare chance for others affected by cancer to rub shoulders with Lance and pals like Robin Williams but to also reflect on the fight against cancer and how to advance the fight. “Cancer affects somebody whether they are a celebrity or an average Joe, it’s not picky. Everybody is here for the same reason and that is sort of what blends everything together,” added Kelly.

The Powerbar Health and Sports Expo, which served as ground zero for the weekend’s activities was part cycling, part awareness, but thick crowds proved it was a hit. With many Lance supporters in town, Saturday’s expo was the perfect chance for local stores like the Bicycle Sport Shop to showcase the latest in Trek innovations while smaller vendors like Scott Coady, creator of The Tour Baby, sold and autographed DVD’s. Lines at the LAF store were a constant as people waited patiently to get their hands in the latest Nike Wear in the form of a Live Strong Jersey and shorts. 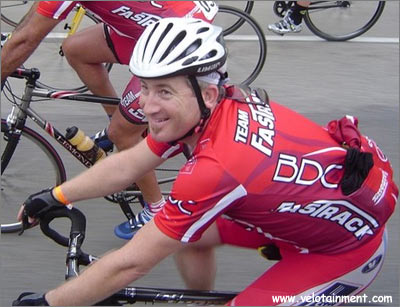 Hey there’s Scott Coady – taking a break from signing copies of his film “The Tour Baby”. Money raised from the sale of the dvd’s goes to the LAF.

As Saturday wound down the buzz grew for Sunday’s ride which covered the terrain east of Austin. Cloudy skies greeted the 6500 riders lined up and the celerity parade of Lance pals continued as Will Ferrell entertained the riders over the P.A. with his best George W. Bush impression before Robin Williams took over with his manic routine. 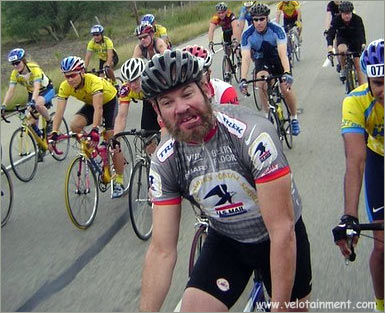 Bob Roll – knows how to suffer.

Also joining Armstrong was girlfriend Sheryl Crow aboard her custom Trek along with Bob Roll, who served as Robin William’s pranking equal while the group rolled out alongside the press motorcade.

Later in the ride Armstrong passed through Elgin, Texas which holds the distinction for being the “Sausage Capital of Texas.” More importantly Elgin is home to rest stop #5 which is manned by cancer survivors and was the only stopping point for Lance during the ride while he took time to thank volunteers for their efforts. 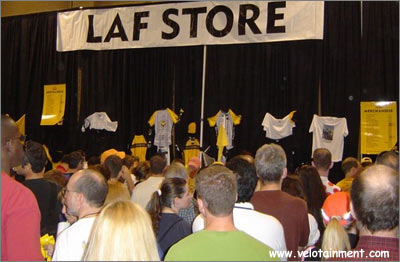 The throng at the LAF Store.

While Armstrong made his way through the group of survivors lined-up to greet him friend Robin Williams commented “I love riding but it’s an honor riding in this event with all of these people,” when discussing the high number of cancer survivors involved both on the bike and off. 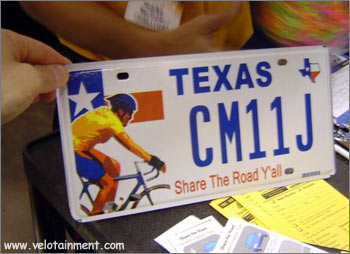 “You go to a race or a lot of these other charity rides and it’s more about what bike you’re riding or how fast you can ride, but here it’s just about enjoying the day and remembering someone or maybe helping someone,” said Kozo Shimano.

After the stop, Armstrong and ride participants made the final 11-mile push back to Austin where the post ride party awaited with a dose of Austin live music. While the total number of dollars raised was still being calculated LAF had another record breaking year and they are looking forward to continuing the trend.