Only one of two men can win the Tour de France; they’re the killers. Others will challenge and one of them will end up on the podium, the pretenders. But it’s too late for some and too early for others – and then there are some for who it could go either way. And of course, you have the dreamers.

The first thing to point out is that it’s good to dream – it’s the starting point of most success. But some dreams come from false premises; like the one that success in the Giro and Vuelta will automatically mean success in le Tour. The Tour is the Tour and whilst Ivan Basso has won the Giro, he could never have won the Tour; and the same could be said of Michele Scarponi and Damiano Cunego. And whilst Alejandro Valverde can win the Vuelta, he’ll never win the Tour.

All of that means that Joaquim Rodriguez (Katusha & Spain) can’t win le Tour irrespective of his podium finishes in the Giro and Vuelta in 2012. The lack of home advantage, the time trials and nature of the Tour’s cols means he’s dreaming when he mentions the GC podium.

One man who does have the home advantage is Pierre Rolland (Europcar & France) but he’ll lose time against the watch and will only be allowed on an ‘adventure’ by the ‘heads’ if he’s lost sufficient time not to be a danger. 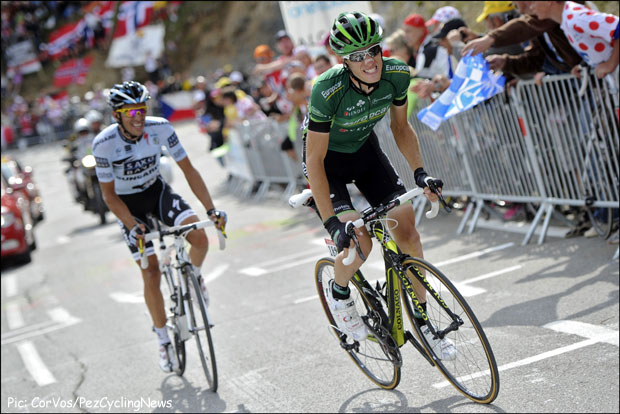 Pierre Rolland attacking on the Alpe d’Huez on his way to a simply huge stage win.

The question is; ‘ride defensively and finish sixth – or keep half an eye on the GC but go for a prestigious mountain stage win?’ I know which one I’d rather try and sell to a sponsor. File under ‘D’ for dreaming – and let’s hope the ‘D’ doesn’t stand for something else . . .

Marc Sergeant is a cool guy, shrewd, grounded and one of the best DS’s around and perhaps fourth place is good enough for the sponsors and the Belgian Media? But Jurgen Van den Broeck (Lotto & Belgium) on the podium is a dream; especially with a team that has to try and support his GC ambitions and get le Gorille in the right place in the sprints.

And then there are the conundrums, the riders who just may do the biz – but the problem with the Tour is that there is zero forgiveness. ‘It’s like riding a Classic every day for three weeks,’ riders will tell you – the days of ‘riding yourself in’ are long gone. Like the title of the 80’s martial arts movie, the ‘The Best of the Best’ is what this race is about.

Ryder Hesjedal (Garmin & Canada) on his game is one of the strongest men in the peloton; he was brilliant in winning the 2012 Giro but this year’s race was a disaster. He was bestial at Liege, setting things up for team mate Dan Martin but in the Tour de Suisse he came down heavily – and if you go back to the movie title, it’s hard to imagine he’ll be at his best. 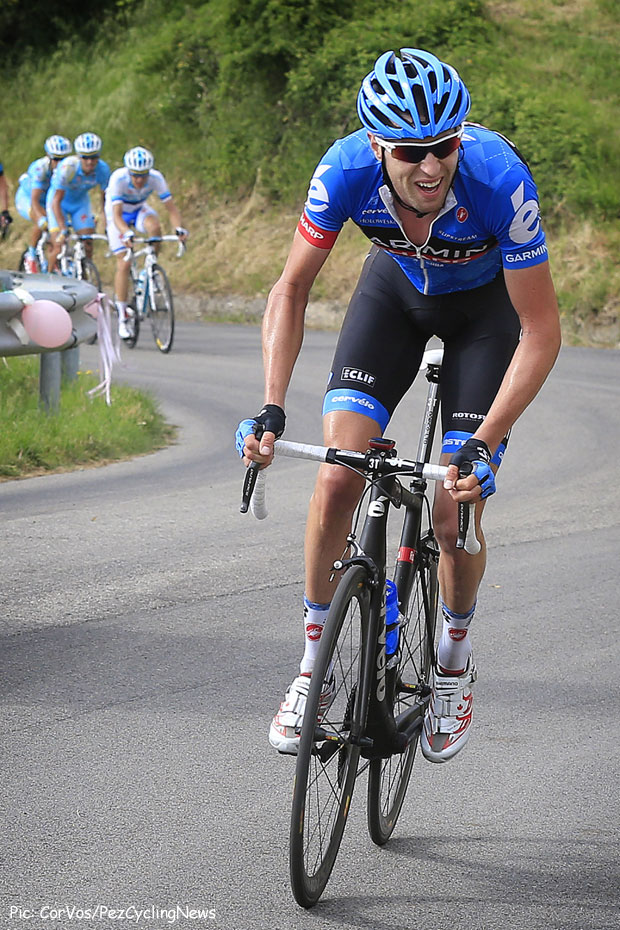 This year’s Giro started so well for Ryder but it quickly turned to disaster. Redemption at Le Tour?

Cadel Evans (BMC & Australia) rode an excellent – if utterly canny and defensive – Giro, taking third spot, but if Alberto Contador can’t pull off a Giro/Tour podium double, then it’s hard to see Cadel managing it. But he did have me eating my words in that Giro – I said he wasn’t a contender . . .

Another former Tour winner just about escapes the ‘Dreamer’ categorisation – Andy Schleck (Radio Shack & Luxembourg). Hugely talented but without a win, and more importantly the hunger for a win, for several years he may just surprise us after some recent green shoots of growth in Suisse. 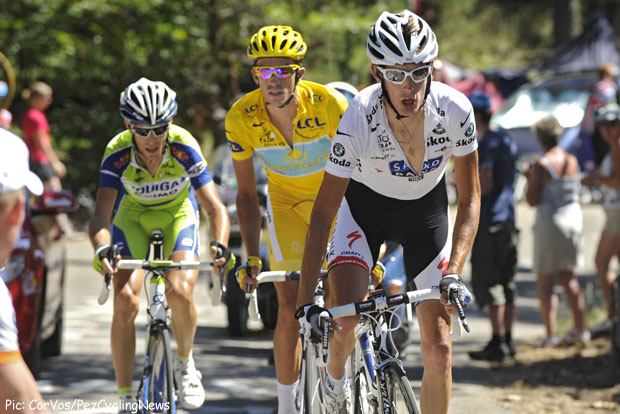 An attacking Andy Schleck at the Tour again? It would be a surprise.

It’s too late for Alejandro Valverde (Movistar & Spain) but a glory stage is on the cards. And it’s maybe too early for double Tour de Suisse winner Rui Costa, The Green Bullet’s 26 year-old Portuguese team mate – he looks to us like he has what it takes to vie for the podium, one day. So who will be fighting for that third podium spot? 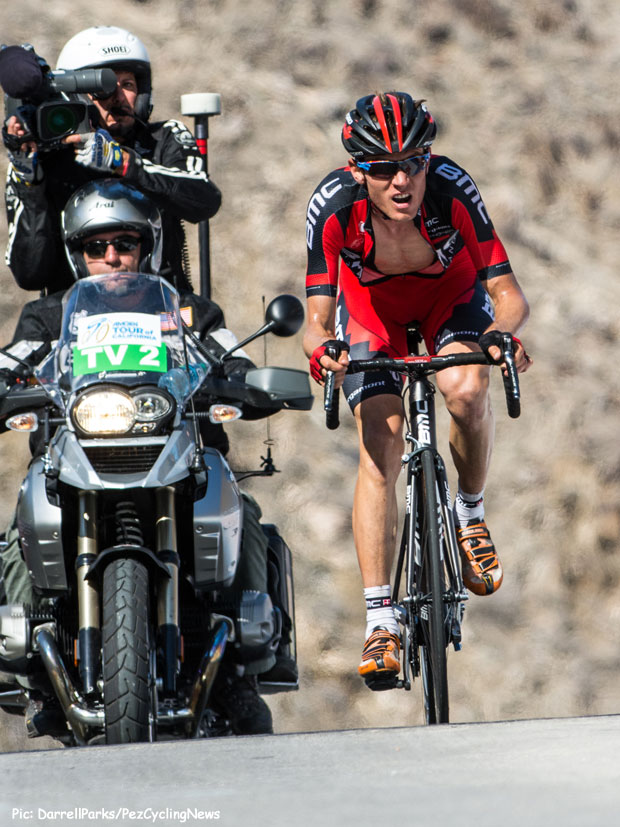 Tejay van Garderen (BMC & USA) was fifth in the Tour, last year and this year he’s been second in San Luis, fourth in Paris-Nice, third in the Criterium International and won the Tour of California. We wouldn’t worry about that seventh spot in Suisse; he may well have been riding to a maximum wattage for the duration so as not to go too deep before the big one. Despite the Media’s frenzied efforts to set up a rivalry with Cadel the tall climber sticks to the party line with Evans as the Capo – we shall see.

Sticking with the USA, the name of Andrew Talansky (Garmin) has to be considered – a stage win and second on GC in Paris-Nice speak for themselves. Since then we’ve seen good rides in the Criterium International, Romandie and Dauphine – he’ll be in the mix. But much will depend on how another of Jonathan Vaughters’ Garmin Young Turks performs – Dan Martin (Ireland). One of British Cycling’s few mistakes in recent years; the man from Birmingham took up his mum’s Irish citizenship because he wasn’t getting recognised by the GB selectors – and the rest is history.

He’s promised much over the last year or two but with a GC win in Catalunya and victory at Liege-Bastogne-Liege he’s confirmed his arrival in 2013. If they play it right then Talansky and Martin – not to mention Hesjedal – can cause problems for the favourites.

Jakob Fuglsang (Astana & Denmark) had a messy divorce from Radio Shack in 2012 but that didn’t stop him from winning the Tours of Austria and Luxembourg. His recent fourth on GC in the Dauphine is noted.

But of all these names, there’s one which would be the best for the race were he to make the podium – Thibaut Pinot (FDJ & France). Still only 23 years-old, tall and tanned he’s the epitome of the dashing Frenchman – 10th last year with a beautifully executed stage win along the way, he was fourth in Suisse. If he can continue his progress then expect even bigger roadside crowds than usual. 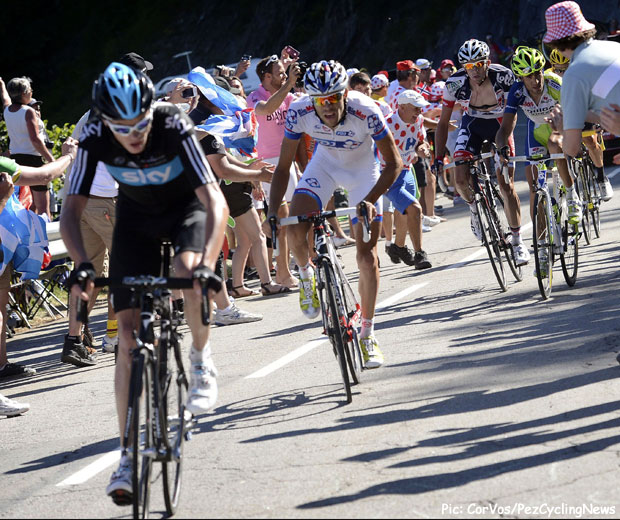 When Chris Froome ‘accidentally’ dropped his team leader last year it was young Thibaut Pinot who was able to respond.

And the two hit men are of course Chris Froome and Alberto Contador. 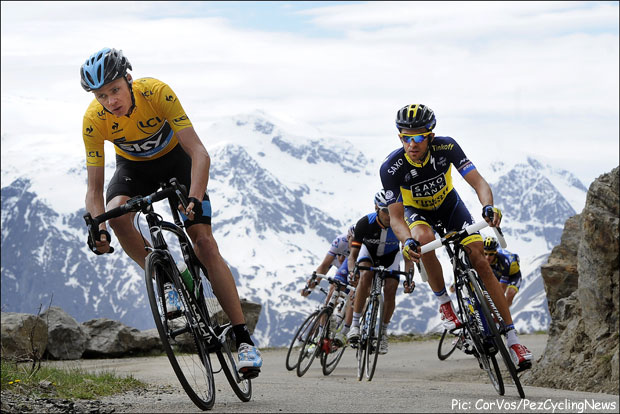 Chris Froome’s (Sky & GB) progress this season has the same air of inevitability about it that Bradley Wiggins (whatever happened to him?) had last season. Oman, the Criterium International, Romandie and the Dauphine all fell to the slim man from Nairobi – with just that pesky Nibali fellow preventing a full house by snaffling Tirreno. Damned Italians, attacking in the rain on descents . . . 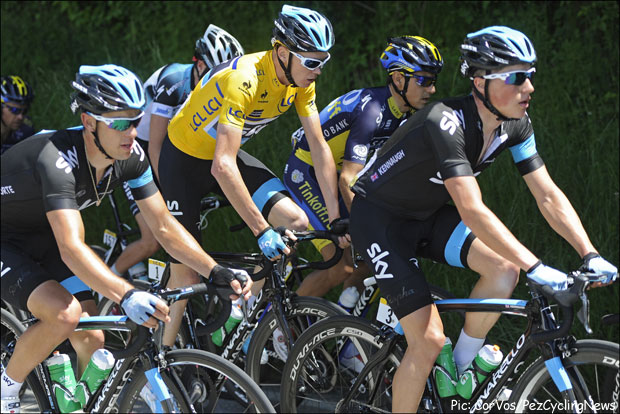 Froome is the opposite of Wiggins, quiet, not requiring the centre of attention and not given to collecting scooters and guitars. He can climb, time trial, he’s cool under fire and absolutely desperate to win le Tour – he also has a great team around him. Who can beat him? It won’t be easy but there’s one man in the field who could do it.

His name is Alberto Contador (Saxo Tinkoff & Spain) he’s one of only five men in history to win all of the Grand Tours and has ‘grinta’ to spare. Cast your mind back to last autumn, Rodriguez had the Vuelta won; but on what should have been a transition stage Contador gambled big, threw all of his chips on the number one, pushed his lieutenants beyond their limits then finished to job off himself to astonish us and destroy Rodriguez. He’s one of the few men in the current peloton who would risk losing a podium place to win. 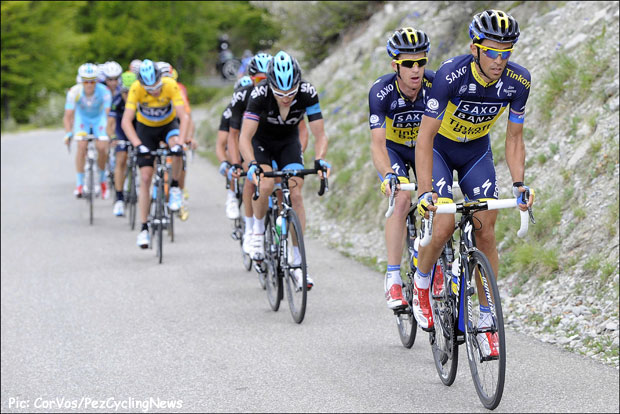 His team is strong – Kreuziger, Rogers, Roche; Spanish disciples Hernandez and Noval and the sergeant major who has the clearest head in the peloton when the bullets fly – Matteo Tosatto. But Froome wants it so bad . . . . The verdict?: Froome from Contador and van Garderen. But we’re happy to eat our hat if Pinot makes the podium. It’ll be a fascinating battle with PEZ there to cover every sprint, chrono and col.

We can’t wait – but it wouldn’t be the same without you, we look forward to your company.