“Impressively steep climbs here in Friuli. Do they look steep on TV? I hope so… Ever since I rode Zoncolan in 2010, I have asked myself what the fixation is with laying asphalt up near cliffs here in Friuli.” – Cadel Evans

Ah, the mountains. Here we are, finally. The high hills usually signal the start of a Grand Tour proper, though in fairness to the 2013 Giro d’Italia, the peloton has been banging along at a fair old clip since day one. In the case of Hesjedal, you could say that he’d lost it even before yesterday’s stage, whereas in Wiggins’ case he’d certainly made things much more difficult for himself. 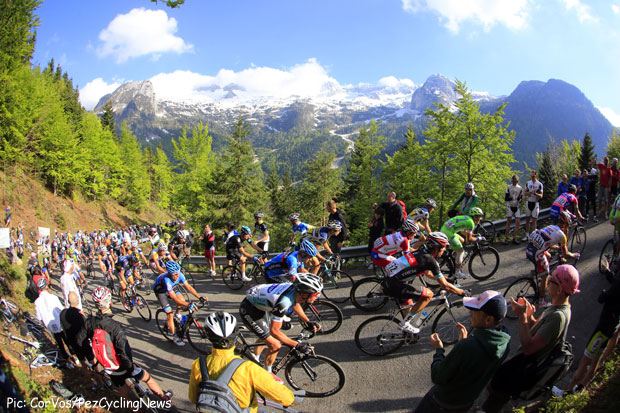 All but the very best climbers fear the kind of hills the race headed up yesterday. You’d be a fool not to. Amazing how adrenalin and being plain old scared can focus the mind. An essential component when being in the top 10 going into the first turn is crucial, when watching for a finger movement that will signal a drop in gearing and an attack.

It’s not an acute sense of fear, it’s more of a dull thud in the gut, deep in the marrow, a sense that there will be nowhere else to hide, no draft to pull you along, no kind offer of a wheel and a shove. To make matters worse, the guys had a rest day just prior, just enough time to let the doubts creep in, to let the muscles relax, and more than enough space to overthink.

And no matter how well you think you may be going, there’s no truer test than a 15% incline to smack you about the head with the brutal truth.

The Uran/Wiggins debate ended yesterday – for most of us, anyway, even if not for the Sky leader.

‘Wiggins retains fourth’ trumpeted the Sky ProCycling website, but there’s nothing but darkness in the sentence, no masking the fact that the 2012 Tour and Olympic TT champion is well off the pace here. 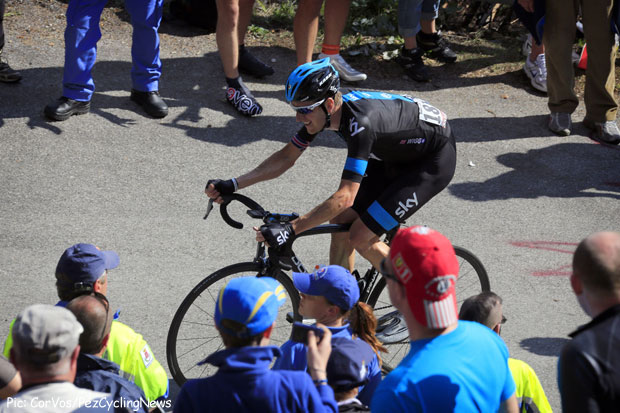 Brad’s bluff and bluster has earned him a few detractors amongst the fans of the sport over the past few weeks but the biggest loser is the man who won yesterday. He lost time previously in the race when he dropped off the back of the peloton to aid Wiggins and he would have less of a deficit than the 2:04 he finds himself down on Nibali had he been riding his own race.

Wiggins’s bullishness and refusal to accept that the game was up contributed to Froome failing at the Vuelta in 2011, and it could be happening here all over again. 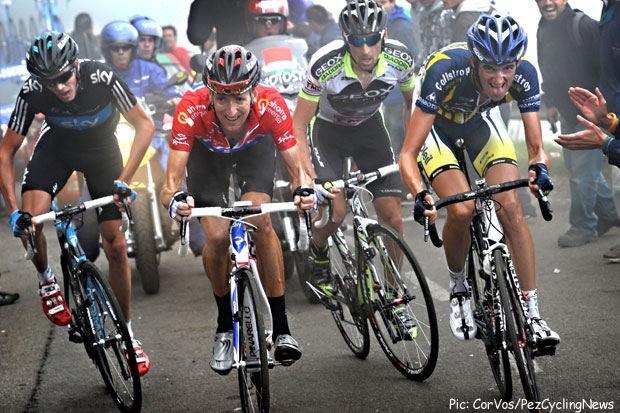 Remember this? In the 2011 Vuelta, Froome followed team orders and stuck by Wiggo’s side as he continued to be touted as SKY team leader to then only lose the Vuelta himself by a scant 13 seconds.

After yesterday’s stage Wiggins was not ruing the loss of time to Nibali and co., but rather he suggested that he was happy with where he ended up. “I’m pretty pleased, actually,’ said the Englishman, ignoring the WTF? looks on the faces of the gathered journos. “It looks like he [Nibali] has a good lead at the moment but it’s never over. There’s still a lot to play for. If the win is perhaps a little bit beyond me now then I’m still fighting 100 per cent to finish on the podium, so that still remains the goal. “It’s never over is it? No, no.”

Tellingly, he was reticent about throwing his still considerable powers behind his teammate Uran. “It depends how it plays out each day really,” said Wiggins. “I’ll have to speak to Rigoberto tonight. He went all out for the stage. It’s just whether he feels now he can go for that GC. There’s a time trial. He’s quite inconsistent like that; he can have a really good day, win a stage like today and then lose a few seconds tomorrow, so we’ll have to see how he feels.”

And how does Rigoberto feel? Well, first off he was delighted with the win, which was a pretty damn good one, dropping Nibali like that and Evans too. But he seems too to be playing the ‘wait-and-see’ game, saying that it was still early days.

He also said this, about himself and teammate and fellow Columbian Henao, partly in answer to the gossip that has been flying around that suggested a ‘Columbian conspiracy’ between the pair. “We are not Froome, so we’ll just see what happens day by day. We knew our roles from the start of the race.”

I loved that – ‘We are not Froome’! I’ll bet Braislford did the Homer Simpson ‘D’oh!’ when he heard that one. And I’ll bet Froome felt like throwing something at the TV – maybe it was his second place trophy from the Vuelta…

They certainly win a lot on Sky, but fun and enjoyment seems to be at a premium. Can’t really say it looks like a jolly work environment. Anyway, if you ask me, Wiggo would be better advised to throw in his lot with Uran, play the good teammate to the media and keep his aims on the podium to himself. There’s no need to drop and take care of Uran if he starts to suffer, but then again there’s no need to accuse the guy of being a fitful performer in public either. That’s not respecting your teammates, it’s churlish and a little petty, truth be told.

Great ride from Evans yesterday. The hill came and he was there til the end. ‘Dogged’ is the word for the man, and though he may carry one around with him, he’s certainly no Chihuahua, more like a grizzled Pointer. Zero marks for style, full marks for those guts. Feels like a podium but not number one, Nibali looks too controlled to let the Aussie in, though what about Uran? 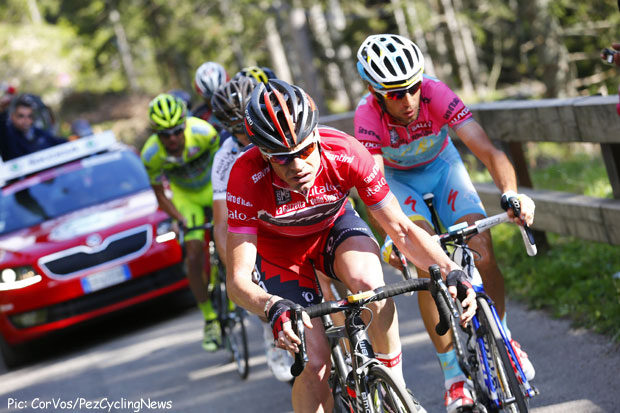 He drifted over the line yesterday when he could have squeezed another three seconds out of the chasers, which I see as indicative of a lack of desire. I know that sounds odd to say of a man who dropped some of the best climbers in the world and won a tough stage of a Giro, and of a top professional, but why sit up when you know that every race win is built on the accumulation of seconds? 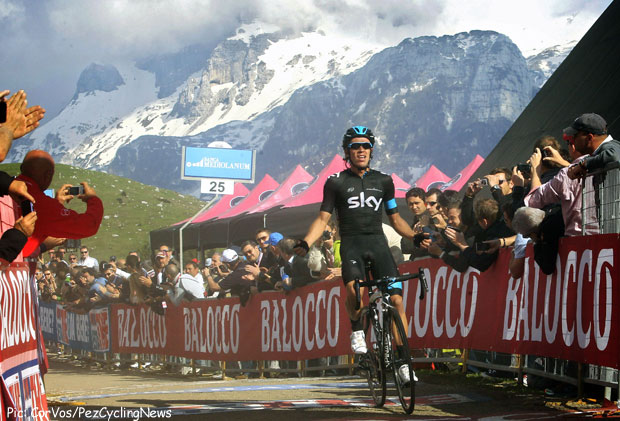 If he is going to go for the win then he has to believe he has it in him. I think Wiggo’s been groomed for this so much that it’s taken the edge off the other potential GC guys on Sky. It’s like the Wiggo/Froome Show over there. Not always a good thing.

The other ride of the day came from Mauro Santambrogio of Vini Fantani-Selle Italia, who rode to 4th place in a very select group. His manager will be thrilled and it’s great to see the Pro-Conti guys up there, fully justifying their selection. So, we learnt a lot from Stage 10, but it is still very much all up for grabs…