Was there ever any doubt that the Giro d’Italia is the best stage race on the planet? How could it not be? The romanticism, the vino, the bella donnas, the style, the cars, the food, the car horns blasting! And that’s just the country. The race? Well, the tradition, the wonder of it all, Coppi, Bartali, Merckx and Moser, the legendary Stephen Roche and Andy Hampsten victories and, of course, the absence of Lance for so many thankful years. 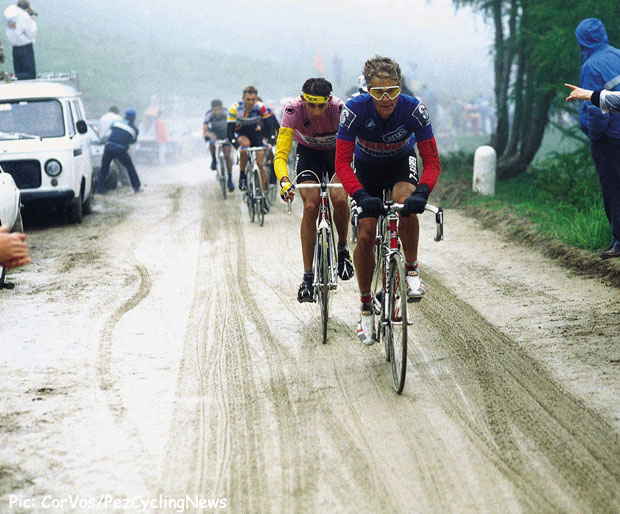 Andy Hampsten en route to his famous Giro victory in 1988

All that and the wealth of beautiful, panoramic countryside and mythical mountain passes: it all combines like Momma’s Bolognese sauce and top notch shavings of parmesan to whack you at the back of the throat and bring a tear full of thanks and praise to dry eyes.

And it was ever thus, right? Well, not exactly. Those of a certain age will be able cast back their minds to a time not so very long ago when the Giro was nothing short of a disaster, suffering from poor international viewing figures and a dip in roadside attendances and unremarkable lineups, stemming in great part from a dictatorial organizer and a misguided desire to rival the Tour de France on its own terms.

Things were so bad at one point that it was even looking over its shoulder in trepidation at the fast approaching shape of the Amgen Tour of California.

Michele Acquarone then took over the stewardship of the Giro, as recently as 2011 and breathed a breath of fresh air into the race, positioning it not as ‘The Tour Mark 2’, but as what it truly is – the Giro d’Italia Mark 1.

Seems so simple now, doesn’t it? Create a parcours that delights in taking on any road, make the route hard but not impossible and stop worrying about the tours of France and California.

‘Build it’, as the old cornfield once whispered into the shell-like of Kevin, ‘and they will come.’

Which brings us to the rest day, May 13th, 2013. I think we, the fans, need this one more than the riders, because it’s been a helter-skelter, pee-in-a-cup-for-fear-of-missing-an-incident kind of race so far. The lineup is truly exceptional, which helps, and there’s only really Alberto Contador and the exciting Tejay Van Garderen missing amongst the potential GC guys, and Boonen , Gilbert and Greipel missing for the one-day side of things.

One guy who is really flying under the radar is the young American, Taylor Phinney of BMC. We keep calling him ‘the young Taylor Phinney’ but he’s been around a bit now, and despite some encouraging flashes of brilliance he has, as of yet, failed to start kicking butt on a regular basis. His performance in the long ITT was underwhelming to say the least, 5.28 down on the winner. Getting ready for July, or saving his powder to aid Evans? Or just going badly? He’s loaded with talent but the weight of expectation can weigh heavy, and that may be part of the problem. 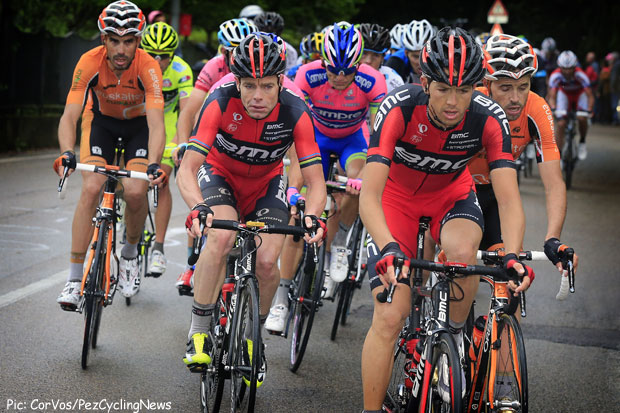 Cuddles is having a blinder, riding with every ounce of his experience and with a confidence that has been positively negative until now. Massively underrated, this guy. He rode to more than one podium in the Tour at a time when large swathes of the peloton were still heavily juiced and it is great to see him answering his detractors in such style.

The true test of course is those high hills, which are just on the horizon. Here we can expect to see the likes of Nibali really try to stamp his authority on the race. There comes a time in the life of a GC hopeful when either the penny drops, or it doesn’t. Victory in the Vuelta in 2010 marked the beginning for the then-26 year old, and we saw the extension of that in last year’s Tour.

Suddenly, the Italian was showing us his personality. They all have one of course, every guy in the pack, but when you can actually see it and feel it through that TV screen, that for me marks the true arrival of a bike racer. He holds a 29 second lead over Evans and is looking very comfortable. You sense a toughness in him that wasn’t so defined before.

Astana suits him, even if pink and Kazakh blue doesn’t. 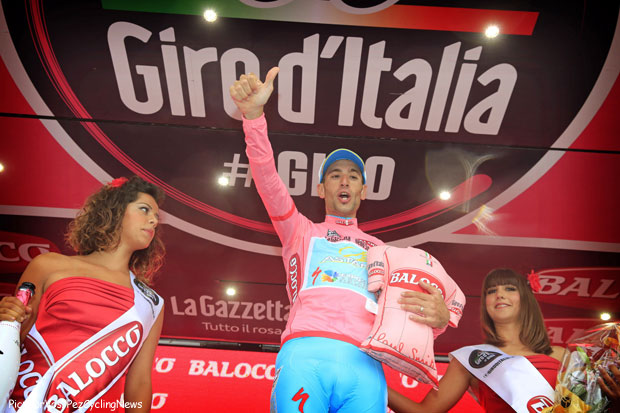 Today all over the web there will be things written about Sky’s leader, Bradley Wiggins, so I won’t go on too much about the coiffured Englishman, save to say that he does not look up for it. He’s 1.16 does on Nibali but the Italian is the more naturally gifted climber and I think he will have trouble dropping Evans too. The team seems tired too, perhaps, dare I say, from the fatigue of constantly being too cool for school.

The action has been great so far, long may it continue. There’s something very good happening in the peloton right now, guys with the confidence to go for it. I could (and have, previously) offer conjecture as to why it is all so unpredictable recently, but for now I am just content to stay glued to the screen.

It’s almost as though we are getting classics-style performances within the wider narrative of the fight for the GC, and that’s not been happening for years. Guys are riding their guts out and the peloton is simply not powerful enough to reign the chancers back in. We’ve seen some brilliant one-off rides this week, none moreso than from Adam Hansen a couple of days ago and Belkov yesterday.

All that encourages others to try too, which means we should see the same for the rest of the race.

So, the rest day. What will they all be doing? It’s a blessing for some and a blight for others. Personally I don’t like rest days, as a racer, as I find that my legs get better with the constant racing. Others can’t wait for them as it offers a much-needed break.

Almost all though will head out for a ride, anything from an easy hour’s spin to a steady two or three hours. Then it’s back to the hotel and on the computer to catch up with emails or to watch a movie or two. Some will be ruing their lack of form, others will be pumped with their better-than-expected form, some will be dreading the resumption of their domestique duties (especially on the leader’s team), and some of the disgruntled will be planning how to usurp their team leader and prove their worth, finally, to the team management.

One or two may sneak in a beer here or there and the playboys might even manage a crafty date with a cute waitress or, trophy of trophies, a podium girl. Yes, they are after all just a bunch of guys hanging out in a hotel, and though the race limits their level of distraction, boys as ever will be boys. 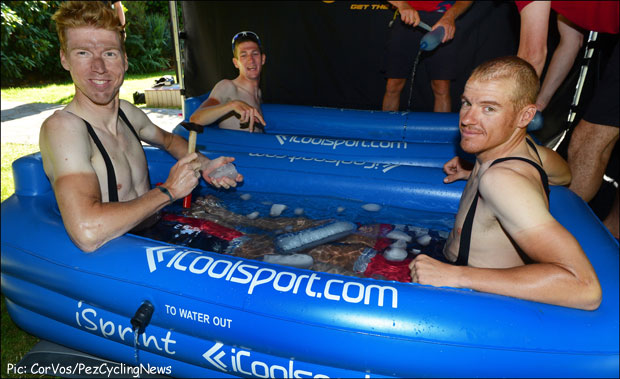 A nice icebath with your teammates like the Lotto guys here at a rest day in the Tour last year or a date with a waitress or podium girl? Tough choice….

What a week they all have ahead of them though. Will Ryder be resurrected? Will Evans show them his new tricks? Can Nibali become the Papa of the pack? Or will we see El Wiggo conjure up another Grand Tour win and smack these pretenders down with that slightly supercilious air of his?

The Rest Day: a welcome respite for most of the riders and a great opportunity to appreciate just how far the Giro d’Italia has risen in the past few years, reclaiming its rightful position amongst the Grand Tours, but when all is said and done: let’s get back to the racing. I’m suffering withdrawal symptoms here…