Almost seven and a half hours of racing gives us a lot to analyze with good tactics, great tactics and even just plain terrible tactics all on display in Florence yesterday. Lee Rodgers takes a closer look at the crucial moments of the 2013 World Championships Men’s Road Race.

With 5 hours and 20 minutes gone of this behemoth of a World Championships there were still 73 riders sitting ensconced in an Italian-led peloton, and what a peloton it was, jam-packed with just about every rider that was in with a shout.

Who did you have your money on? Gilbert? Sagan? Cancellara? One rider that all but the entire population of Portugal wouldn’t have been thinking of was Rui Costa, the eventual winner. Despite a couple of Tour de Suisse titles and Tour de France stages to his credit, he’s not a massive name, not one of those riders who lights up races with audacious attacks, and yet the manner in which he won yesterday had ‘World Champion’ written all over it.

After a few editions that have not exactly been what you’d call classics over the past few seasons, this one was a doozy, and won by a display that not only demonstrated that Costa has ice cold blood running through his veins but also displayed that to win you have to be prepared to lose.

A little more on that later, first I’m still trying to work out which of these was more painful: watching the British team put in one of the lamest performances en masse I’ve seen in years, witnessing Uran Uran smacking hard into that grass verge when he was so close to the finale, Nibali losing out even on the podium or seeing Valverde screw his teammate. 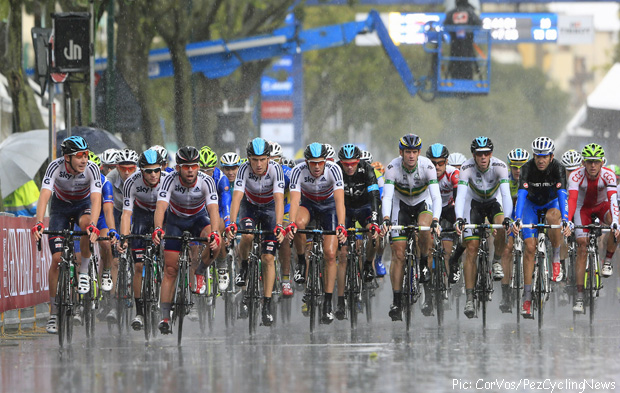 The Brits had the race well under control for the first 100kms . . .

Let’s look at the last one first. Joaquim Rodriguez is not a happy camper right now. “Losing like this is stupid,” he said after the race, which is as close as you’re gonna get to blaming Valverde for the loss. “We had the numbers, we were the strongest, we should not have lost.”

National coach Javier Minguez was also nonplussed. “You can’t let Rui Costa go. Rodriguez had the title in his hands and Nibali was dead,” he lamented. But were they the strongest? Not really. Nibali was flying but not when he needed it, on that descent. It was really a ‘WTF?’ moment, seeing him lose 5 meters on a corner. OK, he’d crashed previously but this is a few short kilometers from the line at the Worlds. If you go down, it’s a bit of road rash and race over, but you knew you at least went for it – or this? Feeling the fear and seriously hampering your chances anyway.

In any case had he won there’d have been protests from all and sundry, thanks to the lift he got from the Italian team car as he was chasing back on post-crash. That would have been very messy. 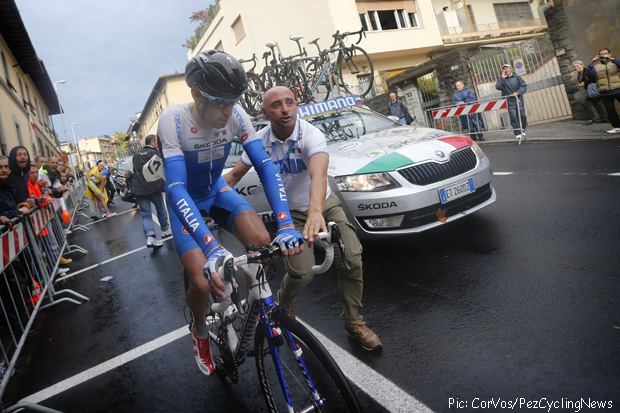 Nibali gets helped back onto his bike by Italian coach Paolo Bettini before receiving some more help a minute later – in the motorised form.

And then there’s Costa. Not as strong as Nibali I felt but stronger than Valverde – if Valverde really was riding at his limit. And if he wasn’t, well only he will know that. What was quite obvious was that Rodriguez was not pleased with Valverde even as the last kilometers unfolded, wagging his finger as though he couldn’t understand Valverde’s riding. 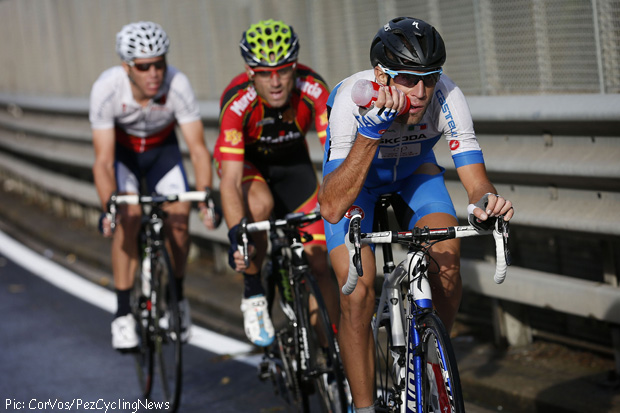 I thought maybe there was a Movistar pact going on but the end of the race out paid to that suspicion. In any case, Costa is off to pastures new next year, though he was still wearing his Movistar gloves I noted!

The manner in which he won truly was brilliant, as he not only factored into the difficult equation his own condition, but also the condition of the others, their style of riding and, critically, the desperation to win of both Nibali and Rodriguez. He mentally outclassed them and went faster than the rest for one single, all-important moment, having hunted down the Spaniard like a true killer in the last 600 meters.

Ultimately it was tears for Rodriguez, exhaustion for Nibali and sideways glances for Valverde, but nothing other than the purest, most unadultered joy for Rui Costa. I admit I shed a tear with him. It was, after a day of calamity and chaos, a finish of sheer perfection. 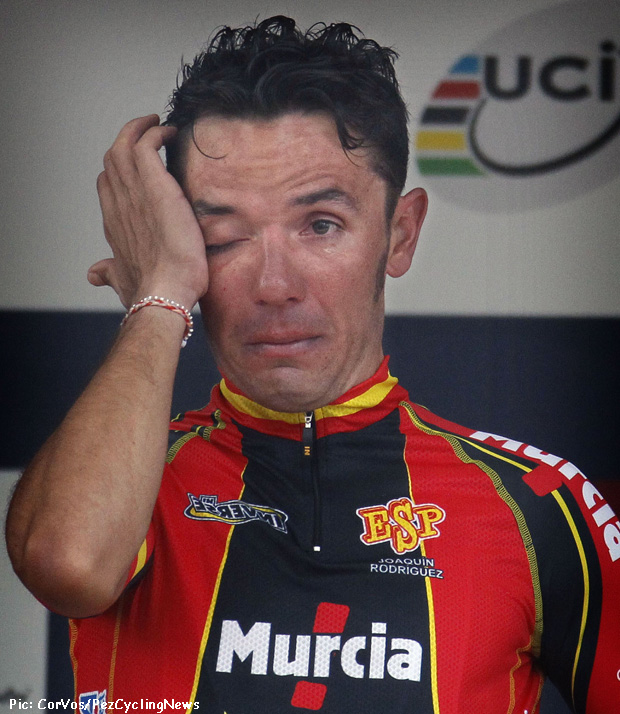 There were a few tears on the podium on Sunday but they weren’t all tears of joy.