Race Report: Maybe not the most enthralling Liège-Bastonge-Liège, but in the end the cream came to the top with all hell letting loose on the final climb to Ans. It looked like last year’s winner Dan Martin had the double in the bag until he crashed on the final corner and Australian national road champion Simon Gerrans swooped to the victory. 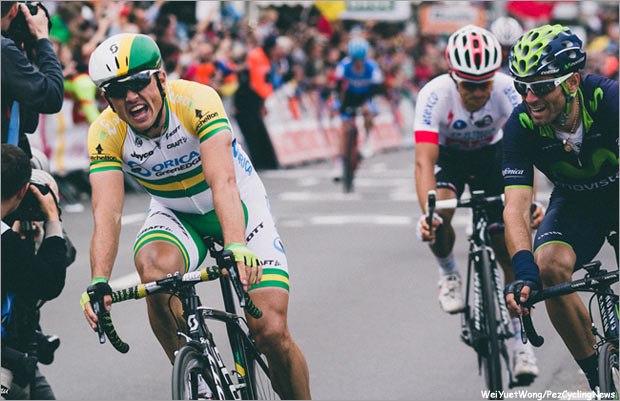 It’s the 100th birthday (edition) for ‘La Doyenne’ and the old girl can still throw us some excitement in her 262.9 kilometres, but today it was mostly in the last kilometre to the line. After the long escape was reeled in, the attacks came one after the other, it looked like the late attack of Giampaolo Caruso (Katusha) and Domenico Pozzovivo (Ag2r-La Mondiale) was going to go all the way to the line, but Dan Martin (Garmin-Sharp) had different ideas and chased them down to the last corner. That’s where it all went wrong for the Irishman and he slid to the ground as Alessandro Valverde and Simon Gerrans closed on Caruso. Gerrans sprint saw off Valverde and the others for the big win.

The Early Action:
Nice weather greeted the riders at the sign-on, although Sky’s Chris Froome was missing due to a chest infection. The break of the day headed off up the road in the first hour and Pirimin Lang (IAM Cycling), Michel Koch (Cannondale), Jacobus Venter (MTN-Qhubeka), Matteo Bono (Lampre-Merida), Pieter Jakobs (Topsport Vlaanderen) and Marco Minnaard (Wanty Groupe-Gobert) started to build up a maximum lead of over 15 minutes with 150 kilometres still to go.

As the race approached the hillier final section the gap slowly shrunk with an average speed of just under 40 kph. With 100 kilometres to go the six (only) had 10 minutes on a bunch being led by BMC and Garmin-Sharp for Philippe Gilbert and last year’s winner Dan Martin.

Km 167.0 – Côte de Wanne – 2.8km at 7.2%
Jacobus Venter (MTN-Qhubeka) led the escape up the Wanne as behind the peloton had woken up and the speed lifted and there was a bad crash in the peloton, including Roman Kreuziger (Tinkoff-Saxo), Jan Bakelants (OPQS) and Luis Meintjes (MTN-Qhubeka) being held up. Omega Pharma – Quick-Step and Europcar came to the front and the speed on the climb put some in trouble splitting the bunch in two.

Km 173.5 – Côte de Stockeu – 1km at 12.4%
The Stockeu comes pretty quickly after the Wanne and the lead had come down to under 8 minutes at the base. Pieter Jakobs (Topsport Vlaanderen) was first over the top again, as he was on the Wanne. OPQS had TT World champ Tony Martin and Michal Kwiatkowski off the front of the chasers; it didn’t look like a tactic, but more Martin riding too fast for the others.

Km 179.0 – Côte de la Haute-Levée 3.6km at 5.6%
Next up; the narrow Haute-Levée was taken at an easier pace with OPQS in control with Belkin and BMC close at hand. Andy Schleck (Trek) called a halt to his day adding to his tally of DNF’s for the season. Jakobs was first again over the top with a lead of 6:20 and the attacks were coming from the peloton; first FDJ and then Europcar, but they came to nothing as it was too early, Garmin and Astana wanted to keep it together a little longer. Katusha’s Joaquim Rodriguez at this point was not happy and shaking his head as Jurgen Van Den Broucke (Lotto Belisol) was dropped (but got back on the descent). Marco Minnaard couldn’t hold on in the break and was scooped up by the peloton.

As the peloton snaked toward the next climb a crash in the peloton brought down World road champion Rui Costa (Lampre-Merida) along with Lopez (Sky), Golas (OPQS) and Agudelo (Colombia), Costa abandoned due to the crash and Rodriguez joined him still nursing his chest and back injuries. With 70 kilometres to go the lead was under 5 minutes.

Km 201.0 – Côte de la Vecquée – 3.1km at 6.4%
On the lead up to the Vacquée the pace slowed enough for riders to relieve themselves at the side of the road and still regain their places in the peloton. Europcar and BMC held the pace at a reasonable speed as the race came through the feed. On the climb Tinkoff-Saxo moved en mass to the front of the peloton as Jakobs was again the first over the line with a lead of 3 minutes with less than 60 kilometres remaining. 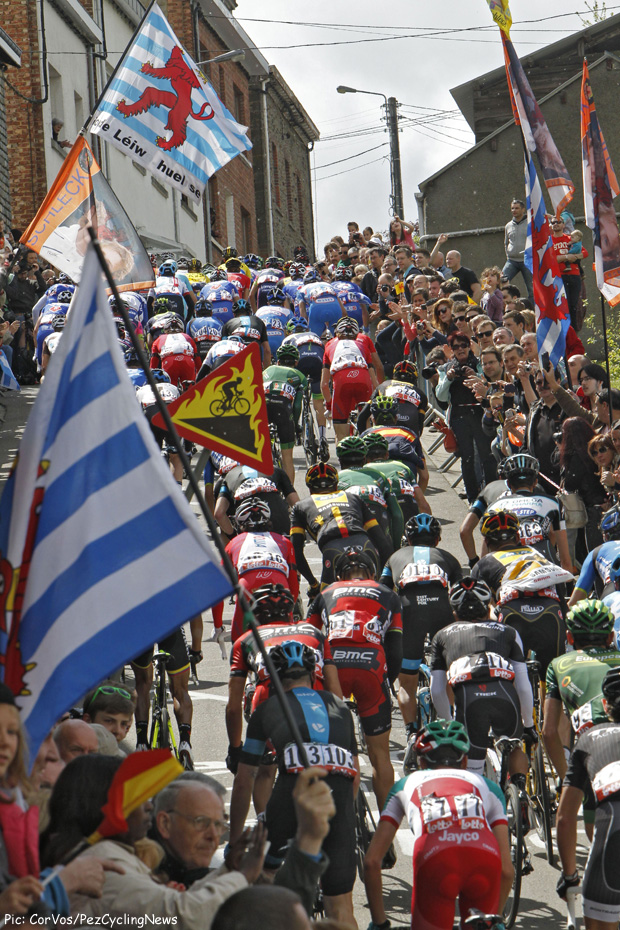 Km 218.5 – Côte de La Redoute – 2km at 8.9%
Europcar and Tinkoff-Saxo led the bunch to the la Redoute and cut the gap to 2:18 as the five up front started to tackle the twists and turns onto the climb. Koch of Cannondale was first to lose his place in the escape as Bono of Lampre-Merida towed them through the crowd of fans. Tony Martin again set the pace for the peloton.

Bono soloed over the line having split the leaders. French young hope; Warren Barguil (Giant-Shimano) attacked and was chased down by Arredondo of Trek and Bakelants (OPQS) and they caught Koch on the descent, but then they were pulled back. Bono was joined by Venter at the front with a lead of just over 1 minute with 40 K’s to go; Jakobs and Lang were between bunch and break.

With 34.2 kilometres to go Jakobs and Lang were caught.

Km 231.5 – Côte des Forges 1.9km at 5.9%
The Forges makes its return to the race route after a few years absence and Bono left Venter to climb on his own. Garmin-Sharp sent Alex Howes up the road to quickly catch and pass Venter, he was joined by Denis Vanendert (Lotto Belisol) and Jérôme Baugnies (Wanty Group-Gobert), but it was all together (apart from Bono) coming into the last 25 kilometres.

Km 243.5 – Côte de La Roche-aux-Faucons – 1.5km at 9.3%
Bono was caught at the start of the penultimate climb of the day with 20 kilometres to go. Ag2r-La Mondiale put three men on the front ahead of Europcar with Voeckler just at hand.

Trek’s Arredondo made the first move, chased by Pozzovivo (Ag2r-La Mondiale), Gilbert (BMC), Bardet and Valverde (Movistar). Arredondo and Pozzovivo took a gap and BMC sent Samu Sanchez after them. It was just too far for Sanchez and he was caught by a group of about eight riders and then the bunch.

Kreuziger and Nibali were the next to try their luck and were joined by Moreno (Katusha), Gilbert (BMC), Valverde (Movistar), but then that move also failed and it all came together again into the final last 15 kilometres.

Pozzovivo and Arredondo had 15 seconds on what was left of the chase group which attacked each other but without anyone achieving any advantage.

Into the industrial streets of Liége and Orica-GreenEDGE had the lead as the light weights Pozzovivo and Arredondo were reeled in.

Km 257.5 – Côte de Saint-Nicolas 1.2km at 8.6%
Movistar took over the lead work for Alejandro Valverde to the start of the climb, and then Orica again pulled Gerrans to the fore. Stefan Denfil (IAM Cycling) jumped away and was chased by Sanchez pulling the others behing him. A strong attack from Caruso went straight past Denfil, he was joined by Pozzovivo and the two pushed hard to make a good gap.

3 kilometres to go; Caruso and Pozzovivo had 10 seconds as Nibali attacked but not strong enough to make a difference.

The Last K
On the 5% climb in the final kilometre the two leaders started to falter and Dan Martin rocketed out of the pack with Kreuziger dragging the others after the bold Irishman. 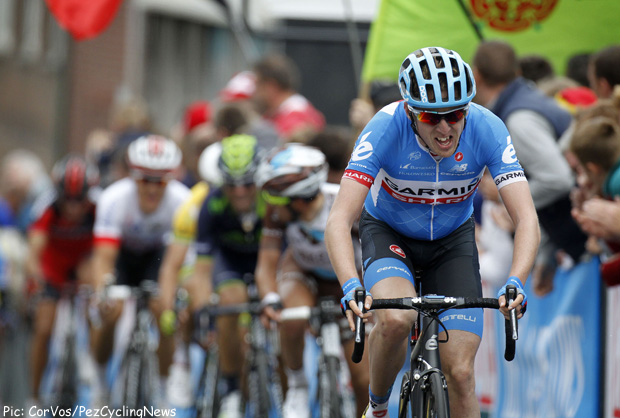 Round the last bend and Martin falls just as he catches Pozzovivo and Caruso. Valverde was next in line with Gerrans and Kwiatkowski on his wheel as they pass Caruso. Gerrans jumped and Valverde didn’t have the strength to pass him for the win. 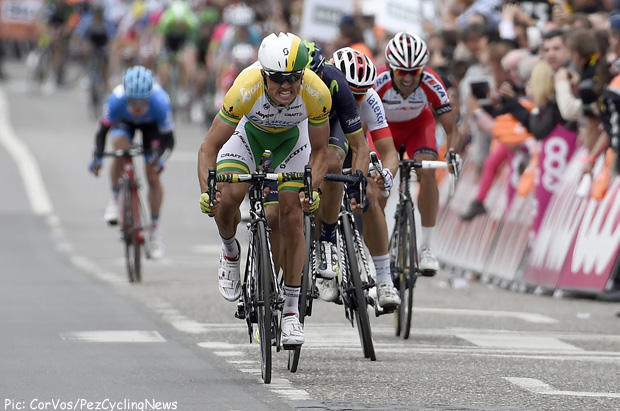 Dan Martin must be thinking what if? But in the end it was a great win for the Australian champion Simon Gerrans. “It was a dream come true, an incredible victory. I didn’t think I had the legs with 30 kilometres to go, but my team helped me so much.” 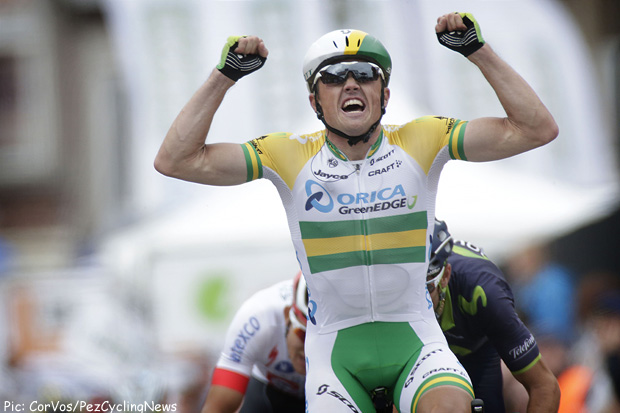 50 years, the Tour of Turkey has aged in style