Life At Philly: The Madman’s Tales

The lull between the before the storm that is July… try your best to relax, and don’t think too much about how great it’s going to be… In the meantime, read these gems from Colavita-Bolla ‘s Roger Rilling’s experience at the US Pro Champs earlier this month…

June, 6, 2003
With two days left until we race Philly, and one day until we leave for Philly, it was the perfect time for some team bonding. What better way to bring a pro cycling team together than to give each other Mohawks. With Nathan already styling the ’hawk, it was Mike [Luther] and Shawn’s [Willard] turn. After convincing Mike that I would spike out my hair for our pre-race team dinner, he finally agreed to fly the ‘hawk. The time to break out the clippers and start cutting away has come. Take into account that I have no idea what I am doing and the fact that Mike thinks I do is cracking me up. After almost 2 hours of trimming, Mike had what appeared to be a Mohawk. It was a little uneven and a little rough looking, but hey, it is a Mohawk! Shawn, or as we refer to him, Scraps, did not go through with his promise to fly the ‘hawk, and we had to be satisfied with Karl styling a Village People moustache for the evening.

By the time the team dinner rolled around the next day, Mike showed up with a Mohawk highlighted with red and blue temporary color, and I showed up with a couple red and blue dreadlocks! I promise it was all in the name of team bonding. Once we returned from dinner, we had a great team meeting led by Sebastian [Alexandre]. This man never seems to amaze me; one second he is sprinting with the best of them and the next he is organizing a pro team (thanks Seba). All that is left to do now is watch a little bit of Old School to calm the nerves then head to bed.

Race day is here and although I did not get the best night’s sleep, I was able to manage 4 hours. It was now time to head down to breakfast and fuel up. To my disappointment, upon arrival to breakfast I noticed that Scraps was not looking very good. It turns out he did not sleep and was running a fever. Well, the race must go on, and so it did.

After fueling up, I changed into my race clothing and road down to our team tent. The fact that we have our very own team area in the feed zone was very cool to me. Plus the fact that I could joke around with my old teammates that were two tents down from us made things even better. Now all I had to do was ride over to sign in and load my pockets with energy food. Sign-in at a big race is always cool because you have to walk up onto the announcers’ booth, and for one second all eyes are on you without even raising your heart rate.

Everyone was called to the line a whopping 40 minutes before the start. They had a great pre-race hype up, and by the time they played the national anthem I was holding back the tears. As soon as the started to play “The Final Countdown,” I quickly wiped my eyes in the fear that someone might think that song was making me emotional. Boys, it is race time, and the feeling I had when Phil Liggett came over the PA and started the race made all my dedication to cycling worthwhile. Once on the road, the pace was fast but I fought to get to the front and stayed in the front third for most of the race. Looking behind me to see two Saeco riders on my wheel and a live broadcast being displayed on the biggest TV screen I had ever seen was quite a feeling. I had to use all the power I had to control myself from making a suicide attack and fulfilling one of my dreams of having Phil talk about me in a race.

Once on the big loop things continued to click for me and the rest of Colavita-Bolla. The first time up the wall was interesting. Since I had not seen the course before, I had to watch what the riders in front of me were doing—as soon as they shifted into the small ring I was quick to follow. I must say the wall is one of the greatest things I had ever ridden over—it had everything from a little cobbles to a reggae band at the top, and then there were the fans! The worst thing about the wall was coming down it, especially for me; I just could not seem to suss it out. The second bad thing about the wall was the fact that some of the fans were smoking up a storm, which made it hard to breath at times.

After the wall and the fast descent, we headed into a flat section and then up Lemon Hill. Lemon Hill was almost as great as the wall but much shorter and a lot less painful. After the wall we hit two switch backs and then the fast run into the start-finish loop. The first time down Lemon the guys really punched it and I found myself losing wheels, so the next time through I knew I had to push hard from the bottom of the hill to the grandstands. Every time through the start-finish area reminded me of those old Match Box race tracks that would push the car every time it passed by. I am probably the only one that understands that analogy, so I will simply say that I got recharged every time through the start finish.

Around the second lap there was a breakaway with about four riders in it. As the great rider he is, Gustavo [Artacho] chased it down. At one point The Great One had over a minute on the main field, but the breakaway was just a little too strong for him to close in all the way. Gustavo made us all proud, and showed us once again what a classy rider he is. The rest of the day was filled with Colavita Bolla staying towards the front for as long as we all could, great job guys.

In the end Greg and Chook were the last standing from the team. Greg and Chookman did a great job sticking it out until the end. Overall everyone did their part in the race and in the end we all came away with a great experience. After my race was done I was happy based, on the fact that the race does not feel impossible anymore and I know what to expect now. Next year I am sure Colavita-Bolla will be true force to reckon with; “Watch out Saeco!

Until next time, Cheers, 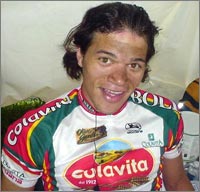