Yikes – The PEZ goes to Belgium for a few days, but forgets to cancel mail delivery. Good thing too, as PEZ-Readers are chattin’ it up in the outfield! Here’s some spit-balls, curves, and sinkers that landed in our inbox… 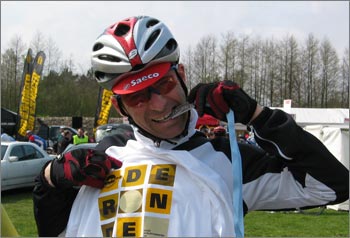 Dear PEZ: For those of us stuck here in the US, where could we get one of those “de ronde” Tour of Flanders T shirts you guys are showing off?

Near as I can figure, you actually have to go to Belgium, and complete the amateur Rhonde to score one of these collectibles! – Pez.

Finally – finally, some publication has focussed on the duplicitous way in which Jean Marie LeBlanc and the ASO are treating Cofidis and Kelme. As you know, we have discussed this issue before but no other publication has had the courage to write a leader such as the one that you published on Tuesday 6th April 2004.

As your leader comment points out, the ASO/TDF are prepared to act on what is hearsay evidence (although I suspect that Manzano’s accusations are probably true) and thus ban Kelme, while they allow Cofidis to retain their TDF place, even though hard tangible evidence has been provided by the civil authorities (French Police) in France. The French Authorities, to do what they did during the investigation of Cofidis, would have had to have obtained authorization from a French judge. Is Mr. LeBlanc really trying to convince us that hearsay evidence is more reliable than the evidence garnered by the French Police? How do the French police feel when they see that their investigations and the evidence of their investigations is basically ignored by Mon. LeBlanc & Co.?

I commend you and your publication for writing your article. This sport and its authorities have become the laughing stock of the world of sport. Not only is this sport unable to regulate itself – its so called management structure goes out of it’s way to show how utterly deliquent and dysfunctional it actually is.

I truly despair for this sport because the pathological liars that govern this sport have lost all sense of what is right and wrong, both on an ethical and moral level.

-Seamus Weber
Limerick, Republic of Ireland
——————————–
I read with disdain the actions of the gutless and obviously bigoted JML. But then, you’ve got to remember, he controls the “Tour”. It reminds me of the scenario with Tony George, Indy and CART. Since George controls the Indianapolis 500 the others be damned. So the other teams formed CART, now they are history. So Tony and the 500 are last man/event standing. Not because Tony is a guru of motor sports, but because he realized the 500 is bigger than the sport. JML is a bastard of monumental proportions, true… but this is the Tour and it too is bigger than the sport. What, you wouldn’t watch it or read about it anyway even if knowing all the FRENCH teams were doped up and given a pass. Sure, you’d watch because it is the Tour. JML can’t hurt the Tour, but he can Kill the sport. How many sponsors are willing to risk being associated with drugs and a corrupt sport? Look at the condition of the sport worldwide. It is in a tail spin, even though the depth of talent is greater than it’s ever been. JML needs to peer beyond the depth of his myopia, his obvious bias and hypocrisy and realize what his actions are doing to the sport at large. There will always be a “TOUR”… but is that enough?
– Mark Roth
————————–
The imaginary exchange between Charles Manantan and Jean Marie Le Blanc was hysterical. I could easily imagine watching the interview on OLN right before the start of the TDF. Keep up the good work and the great web site!
– Joe Bowler
————————–
I think your editorial about ASO excluding Kelme while admitting Cofidis is dead on! A guy with an ax to grind, even if he confessed to doping is not evidence enough, but police investigations and taped statements from a team doctor should be. Maybe there are a few letters missing from this organization’s abbreviation.
– Ken Parkington

Dear Pez,
What a wonderful set of diary entries to read. I found myself checking the site often for the next installment, and full of disappointment when the last one was finished. Sounded like a great trip, and I hope with all my dreams that I too can participate in such an adventure. Two great loves of my life in one place: Good biking, and great beer! What more could a human being ask for?

Got Something To Say?
PEZ welcomes all forms of opinion, even hot air. Make it PEZ-worthy and we might just publish you in glorious pixelated black & white!