This week’s MailBag runneth a-plenty with Reader thoughts on the “dilemma” of Milan-Sanremo. Has la Primavera become too easy, is a 300 km race that only sees real action in the last 30km worthy of WC status? Here’s what you say… 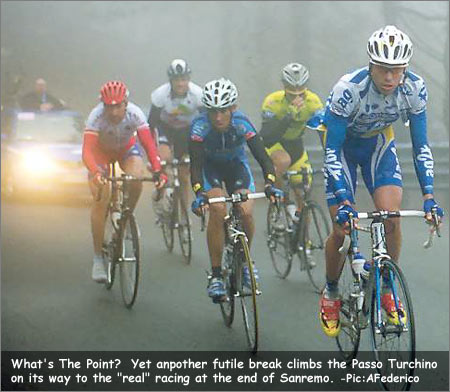 And PEZ-fans Reply:
A Beautiful Race
I deeply read your comment concerning the Milano Sanremo “dilemma”. In my opinion recent history (last 30 years) of Milano Sanremo shows that this race is a sort of war between the sprinters and Classic’s men. This is the soul of this beautiful race. When the sprints become too frequent in Via Roma it’s time to change and insert a new hill to balance this duel. Also because Sanremo can be very dangerous on the narrow downhills and it’s not the case to give too many risks to the riders. Milano Sanremo is not exactly a sprinters’ race like Paris – Tours. Hw who has been in the Riviera knows how dangerous the roads are there!

During recent years the sprinters become again the kings in Sanremo except for Bettini last year with a super action since from Cipressa. But this year nobody tried anything: we must remember that Milano Sanremo is not only Cipressa and Poggio. There are 269 km before the Cipressa! Why nobody tried an attack on Turchino downhill? This year there were terrible conditions on the top.

Milano Sanremo in this moment doesn’t need any change. But we have to monitor the future in order to leave to this race its beautiful soul.

I completely agree that Milano-SanRemo is just fine as it is. As you noted, don’t fix it cuz it ain’t broke!

Lets keep Milano SanRemo as it is, thanks.

Hello Pez:
All that you said about MSR is absolutely true. It’s the beginning of the season, it’s all about showing off, to be seen on the first day of “primavera” on new bikes and equipment, to be seen. MSR it’s reflection of Italian attitude toward life, cycling; that the new season is just began and you should be ready for new challenges. It was magnificent this year, especially the last hour with fearsome speed and action all over coastal roads.

MSR has always been typical of Italian racing, and I am sure the Italians would still have it this way if they had their druthers- like the Giro in the old days: We Only Race When The Cameras Are On… The distance is also a bit of a throwback.

I have always thought Milan-San Remo needed some more hills in the middle. The classic showdown aspect of it shouldn’t change – The Cipressa/Poggio bumps are a monument and I hope one day to watch from there, but still we should hurt ’em some more in the gut of the thing. WE WANT SUFFERING! Why else do we watch cycling?

I can understand the character of the race, though, but the game has changed. Just 300km isn’t enough for today’s uber-athlete.

Got Something To Say?
PEZ welcomes all forms of opinion, even hot air. Make it PEZ-worthy and we might just publish you in glorious pixelated black & white!