We last spoke to Martin Hacecky, ‘our man in the Czech Republic’ back in the spring after he and his Dukla Praha team had returned from jousting with Alberto Contador and the rest at Argentina’s increasingly popular Tour de San Luis.

As well as being a pro, Hacecky finds time to write for Czech cycling magazine 53 x 11 and commentates for Eurosport in his homeland.

His solid season earned him a place in the national squad for the Elite World Road Race Championships in Florence in support of former ‘crosser’ but now increasingly dangerous roadman, Zdenek Stybar. However, fate had other ideas and the genial man from Prague ended up in hospital after a bad crash, dashing his Worlds hopes. 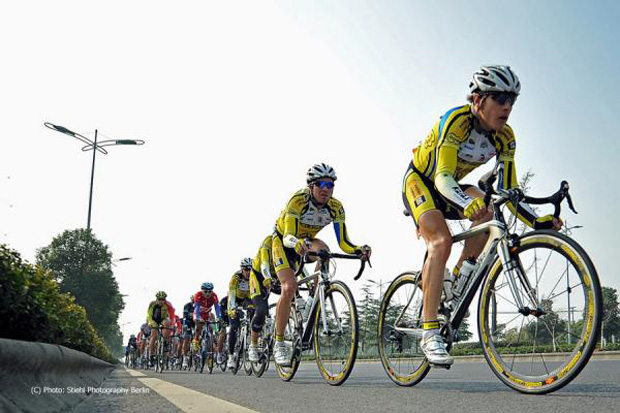 PEZ recently caught up with him to discuss the crash, his recovery and all things Czech Cycling.

PEZ: Martin, remind us when and how you crashed and what the damage was.
It was three weeks before the Worlds during a stage race in the Czech Republic – some rider in front of me panicked and caused a big crash on descent.

There were many riders with broken bones; I fell into unconsciousness for almost an hour because I crashed on my head but fortunately my helmet saved my brain without lasting effects – at least I hope so . .

I spent 10 days in hospital with two fractured thoracic vertebrae and another three weeks lying in bed at home.

PEZ: How is your recovery going?
Progress in the first four weeks was huge, it was better day by day but as I started to move around more, the healing slowed down and now training runs can be painful, a little bit. But I’m getting back to normal and I can survive almost four hours on bike already – I feel I could start getting into triathlon as I’m swimming almost every day as part of my recovery.

PEZ: Your season was going well with some road wins and a silver medal in Czech scratch championships.
On a paper, it wasn’t my best season as I wasn’t winning so much, but personal results aren’t the only way how to rate cyclist. There were many occasions which boosted my confidence and where I proved I’m a valuable rider to my team.

PEZ: And there’s every chance you would have ridden the Elite Worlds in Florence?
That’s one of the occasions I’m talking about. Fortunately there are some people in Czech Cycling who are aware of my abilities and put my name on the squad. In the end, I felt sorry when I realised that the Czech team started with six riders instead of seven and I should have been part of it. 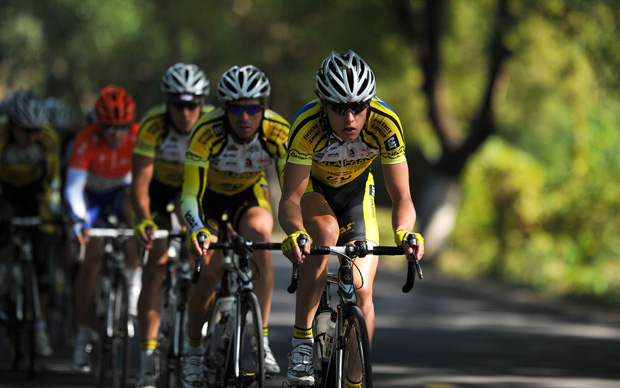 Martin is a valued teammate in his Dukla Praha road team.

PEZ: Did you watch the Elite Worlds, what did you think of it?
There was nothing for me to be envious of; I share the opinion of many riders that the weather diminished the attractiveness of the race. But there were some epic moments during the race which are written in cycling history – an almost broken Nibali sitting on the deck after his fall; Uran crashing out of contention and Valverde doing nothing in the final.

I’m on Purito’s side; Spain should have won, Valverde should have followed Costa. But I do not grudge the Portuguese the title, I like Rui’s way of racing and I admire him, he’s of my generation and we raced against each other when we were younger.

PEZ: Are you still writing about cycling for 53 x 11 magazine in the Czech Republic?
I was writing in hospital with my notebook hanged above my head! As you see in Procycling magazine for example, it’s nothing exceptional for riders to be writing about the sport. They have names like Dan Martin writing for them. I’m doing something similar; cycling is my passion and I feel I can help to let the sport grow.

PEZ: And commentating for Eurosport?
It’s the same thing, they are satisfied with my job and I enjoy being part of the newsroom. They appreciate I understand the sport and that I can help them to raise the level of broadcasting; despite the fact that I have to give priority to racing so I can’t be there all the time. Cycling is a hard sport to commentate on and a commentator who has never raced simply can’t see what’s really happening on the screen.

PEZ: Your team mate Alois Kankovsky rode well in China’s Tour of Taihu with two stage wins.
He should have been up to that the level before; remember that he’s been a world champion in the omnium. It may sound grandiose, but believe me he’s able to compete with the best sprinters in the sport.

But I’m afraid it’s too late for him, he should have left Czech many years ago in search of a Central European team.

PEZ: And your brother Vojtech has been working hard for Alois in Taihu – does he keep in touch by Skype or email?
Vojtech is Alois’s winning key. Alois had some offers from other teams but part of his requirement was a contract for my brother too. In the current situation in cycling with five professional teams folding, it’s a problem to take two riders. But I believe that next year, with Alonso and Tinkov coming and Anglo-Saxon cycling growing, it could be different.

PEZ: What’s the team situation like for 2014 in the Czech Republic – have you gained or lost teams and is all still well with Dukla Praha ?
The crisis is everywhere – the Czech continental team with 20 years tradition Bauknecht-Author (formerly known as Whirlpool and in the past employing the likes of Hondo and Sinkewitz) has financial problems and four of the strongest Czech riders had to perhaps end their careers or try to find another employer.

It could have been a disaster, but fortunately they found a small sponsor who will help them. In Dukla Praha, we gave up our hopes to get to Pro Continental level but at least we will continue with almost the same program as last year.

PEZ: Have many Czech riders been affected by the loss of five Pro Continental and World Tours, this autumn?
One name more than others is Frantisek Rabon. After eight years in first division he couldn’t find a place, even at Pro Conti level and he’s considering ending his career at the age of 30. 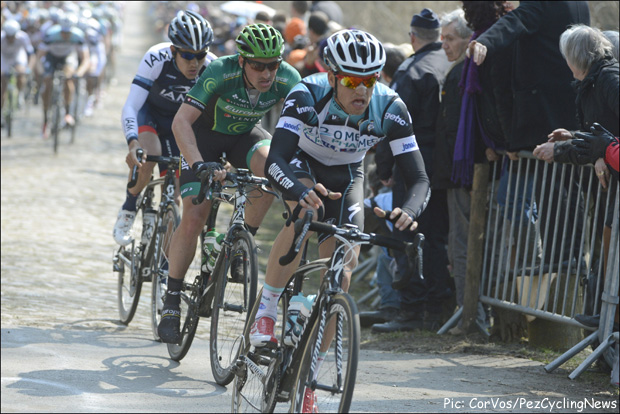 Stybar leading the way at Roubaix with a quick, ‘Look ma – no hands’.

PEZ: Zdenek Stybar – can he win Paris-Roubaix?
If history can repeat – yes, I think so. It was a great race for him this year with Omega Pharma QuickStep the strongest squad in the race – but personally, I believe in him more for the Tour of Flanders.

PEZ: Roman Kreuziger was very good in 2013 – he won the Amstel and rode a good Tour for Contador, what do you think he can do in 2014?
It’ll be difficult to improve upon those achievements next year – even though he rode a great Tour this year in service of Contador. I expect him to shine more in 2015; he is able to finish in the top three in a Grand Tour for sure. But next year in my opinion is too soon; it would be enough for him to make some progress and show consistency. 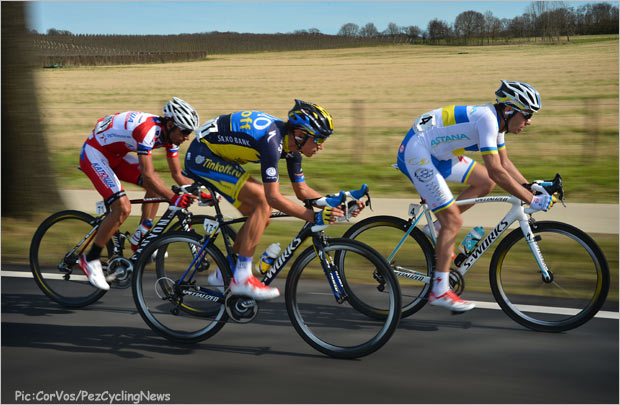 Roman Kreuziger on way to the victory at Amstel this year. Martin thinks 2015 will be even better for his fellow Czech.

PEZ: Has there been much interest in the Czech Republic about the McQuaid/Cookson leadership battle?
No, I didn’t register anything special; Czech cycling national politics begin and end within the Czech Cycling Federation. Unfortunately Cookson can change anything in the UCI headquarters because they’ve created their own ‘world of cycling’ which isn’t transparent, is corrupted and has devastating effects for us, the riders.

PEZ: And what about the drugs stories which never seem to end; with Rasmussen the latest?
I see people getting apathetic about it all. Fortunately there are many successful Czech riders who interest people more than frustrated ex-pro’s testimonies. And generally, there are not many Czech scandal-oriented cycling journalists. There are many people trying to help cycling and these things devastate the sport for no gain at all.

PEZ: What would you like to be your first race back?
Well, I’ll be ready for the Coppi e Bartali stage race in Italy in March, that’s for sure. Before that, we’re negotiating about a ride in the Tour of Taiwan and if everything goes well, I would love to participate at the Berlin six day.

PEZ: What are your goals for 2014?
Next year’s Czech Elite Road Championship is in my home town of Prague. It would be an honour to wear the Czech national champion’s colours. The course should be hard, which suits me and I will get support from the team if I am strong enough. But my first goal is the Tour of Brittany which is my favourite race.