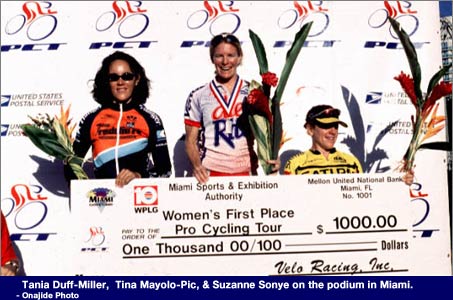 The women’s race was just what one would hope for with a world-class field that started before the men’s event. The women, although flying around the
course, didn’t allow any attacks to go away until Tina Mayolo-Pic finally squeezed off the front. Saturn’s Sonye and Iona Winter, with three wheel suckers, bridged up to Mayolo-Pic with three laps to go. In the flying
sprint, Mayolo-Pic beat Tanya Duff-Miller to the line with Suzanne Sonye placing third.

Sonye was a bit miffed about the non-workers in the break and had a few words to say about it. “I don’t want to harp about it but I did most of the work. There were three girls in that group that wouldn’t do anything. I keep attacking and attacking to get up there [to Mayolo-Pic],” she insisted. “The girls in the break just attacked to catch me whenever I tried to get up the road but, after they’d catch me they’d just stop,” she sighed. “I just
figured early on,” Sonye continued, “even if I didn’t win I’d go down trying. I’m really satisfied with my third spot. You know, people seemed to be satisfied with they catch Team Saturn, but you know, I don’t care. I did
my job and I’m satisfied.”

She said, with sweat rolling off her entire body, “It was really, really hot out here. And, that first corner (less than 90 degrees and off-cambered) seemed to be a bit dangerous because of several crashes.”

Having spoken to several women before the race the question was posed if they had taken a close look at the course, and that corner in particular as it has proved decisive in several of the races over the years.

Anyone that thinks women’s racing is not as good as the men’s in totally mistaken! This race proved that with certainty!

Inside A Major Tour: Spanish Style