Everything went according to the expected game plan on the gruelling ninth stage of the Telekom Malaysia Le Tour de Langkawi up to the dizzying heights of Genting Highlands. Last year’s overall winner, Hernan Dario Munoz, Colombia-Selle Italia, launched a massive attack to win the stage and the young American yellow jersey holder Tom Danielson, Saturn, stuck to the Colombian’s wheel to finish second and hold on to his overall leadership. 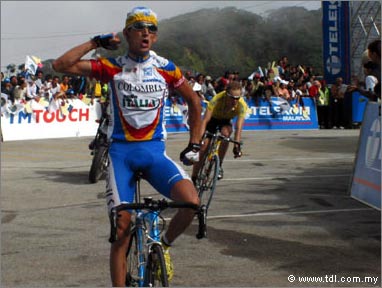 Columbian Hernan Monuz set the pace up the Genting Highlands.

Just nine seconds now separates the two battling climbing specialists but tomorrow’s final stage around Kuala Lumpur city centre is, barring accidents, unlikely to see a reversal of their positions. For young Danielson the Genting challenge was an unusual one: “I am used to setting my own pace on the big climbs,” he said, “I like to light things up by attacking from the start of a climb and riding the others off my wheel. But this time the sensible tactic was to ride defensively, especially given the formidable reputations of Munoz and his Colombian team-mate Freddy Gonzalez. I was always pretty confident but as we got higher up the mountain I couldn’t help thinking that if Munoz kept on attacking the way he was doing I might get into a bit of trouble trying to stay with him.

“I have to give a lot of credit to the Canadian rider Roland Green who, in defending his white King of the Mountains jersey, helped me chase down all of Munoz’s attempts to break away and snatch overall victory from me.” 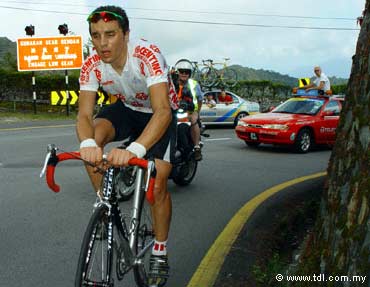 Our predictions of yesterday panned out, with four of our five picks for victory finishing in the first four positions, the absentee being Australian and Commonwealth champion Stuart O’Grady, Credit Agricole, who was beaten by the gradient and the blistering pace set by Munoz, dropping back on the last half of the climb to finish 23rd at 5min 2sec. His game is not over yet though as fans are now expecting a massive battle from the sprinters for tomorrow’s final stage victory and O’Grady is certain to be in the thick of things.

The green jersey of points leader now seems to be sitting safely on the shoulders of Australian fast-man Graeme Brown, Ceramiche Panaria – twice a stage winner, three times runner-up. He went for the intermediate sprints today – winning one and finishing second on each of the two others – to lift his points tally to 107, a comfortable 12-point margin over Stuart O’Grady, “I’m no climber so I had a tough time of it today,” said Brown, who again gave credit to the sterling efforts of his fellow Australian team-mate Brett Lancaster. “I went through a rough patch at about 12km to go then got stomach cramps again around the 5km to go mark but Brett stayed with me and nursed me through,” said Brown later.

The tough sprinter roadman is unlikely to be satisfied just with carrying his green jersey to the final podium – he’s sure to be out to notch a third stage win to match the record of Brazilian revelation Luciano Pagliarini, Lampre, who earlier in the Tour not only took three stages but achieved them on consecutive days. And Pagliarini will probably be anxious to settle the argument over who is really the fastest sprinter in this year’s race by scoring an unprecedented victory number-four. Certainly he seems full of confidence. Today he not only lugged his brawny sprinter’s bulk up Genting, albeit in a modest 95th place, out of 122 finishers, some 18min 26sec behind the winner, but he did an exuberant wheelie for the final 50 yards to the line.

Hero of the day Danielson was in equally exuberant mood, having faced up to the stiffest challenge of his cycling career to date and passed with flying colours: “My eventual goal is the Tour de France someday,” he said, “That’s some way away but winning the Le Tour de Langkawi will be a great start. “There’s talk now of the team riding the Peace Race in Poland and East Germany and maybe of fielding a full line-up for a Continental season. Whatever happens with those plans, I am determined to crack the European scene within the next couple of years.”

For the first time in this year’s Tour, Iran’s thunder in the competitions for best Asians was stolen by the Japanese whose Tomoya Kano was not only the best-placed Asian on the stage, finishing 15th at 3min 57sec but also became best-placed Asian overall, now in 17th place, 5min 20sec in arrears of the yellow jersey. For the first time, Japan was best Asian team on the stage though Iran remains best-placed Asian team overall. Commented: Kano: “We lost two of our best riders very early in the Tour but today it all came good for us. I was with the Indonesian rider Tonton Susanto and his Telekom Malaysia team-mate Ghader Mizbani on the early slopes of Genting and was able to ride away from them as we climbed higher.”