Tucked into the Hills between LA and Malibu, SRAM have launched a couple of new products for 2013. Red gets the Jump from 10 to 11 speed (SRAM 22) and they’re launching Road Hydro disc and Caliper brakes. They’re also making the leap to 22 for an improved Force group set that gets close to the function of RED… Maybe too close.

We’ll dig in to the product as I took the test bikes… We’ll start with Red 22 with HRR (Hydro Road Rim) braking, and the Cannondale SuperSix EVO. 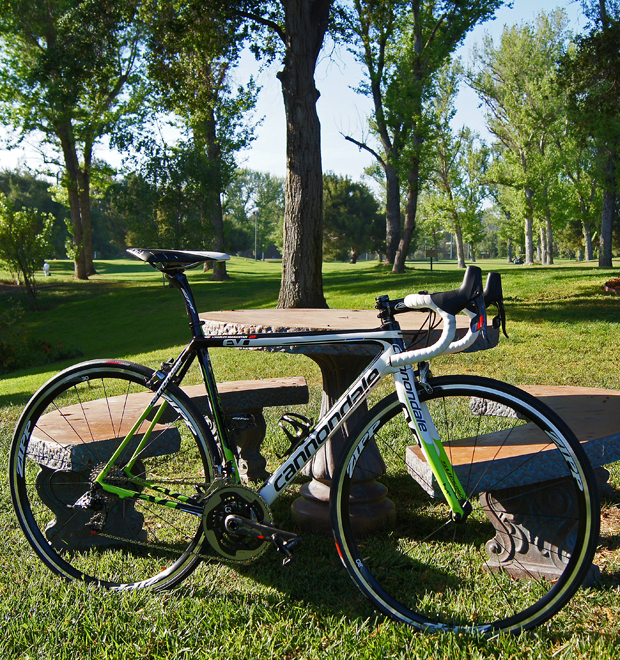 And with that, we’ll cover off Hydro from the hands down. The new levers definitely take a new shape. 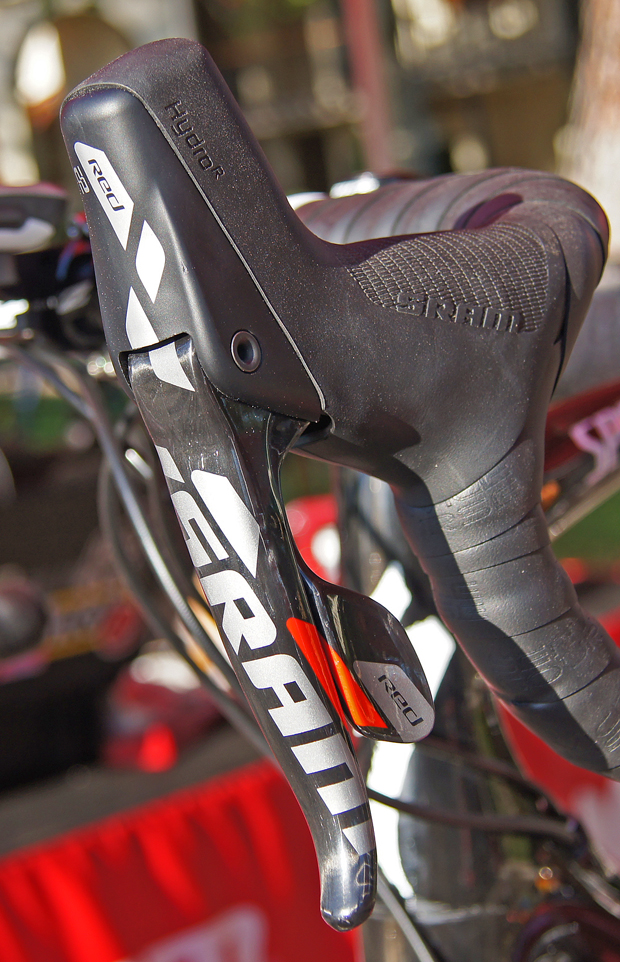 Given the leaked shots and some open testing, there’s already plenty of conversation and speculation about the new design. The real comment needs to come from taking them on the road though, and honestly, these feel very close to the standard Red levers. Looking at where your hand typically sits, the main body of the lever is a match to non-hydro… 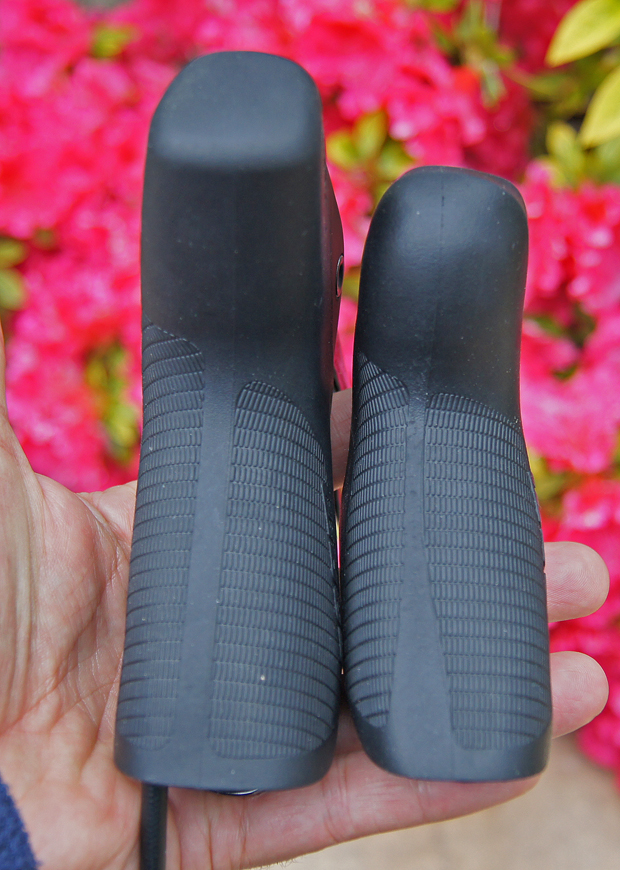 The only time you feel a difference is in the case that you use the higher rise at the top for a new hand position. At that point you can feel a bit of the squared profile.

The height of the levers isn’t massively larger than the standard lever. 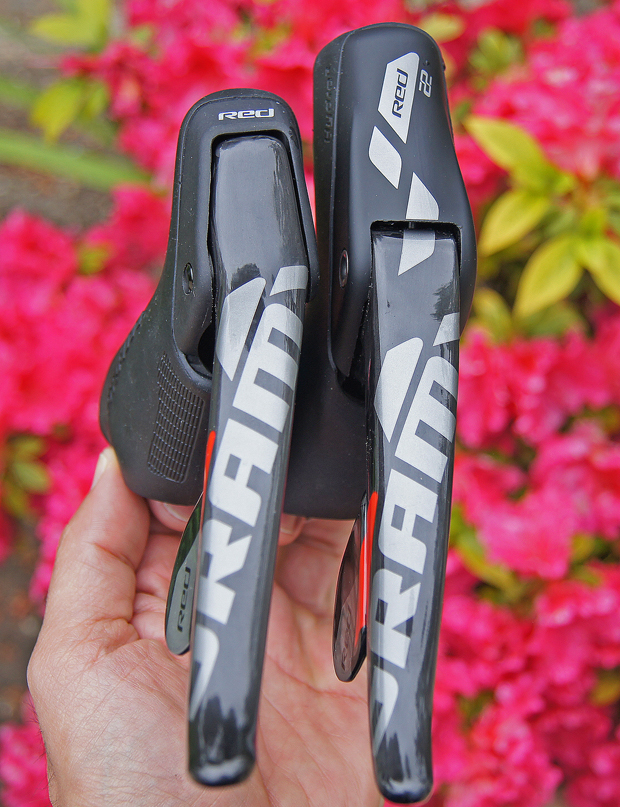 And there is no difference in shift operation with the Hydro levers. They’re functionally the same as their non Hydro counterparts. You can see the mechanism inside the uncovered lever and it is the standard Red shift mechanism (though 11 speed specific). 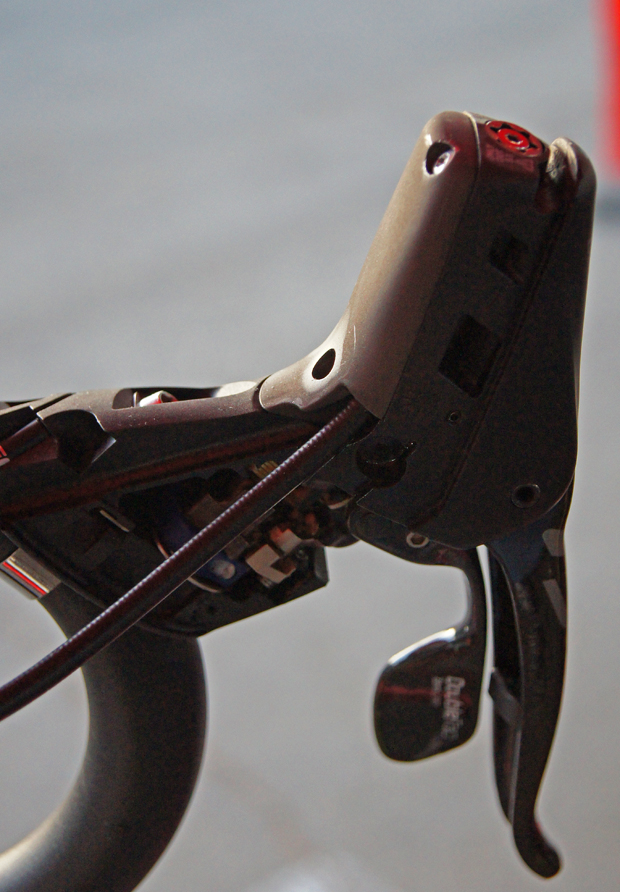 Quick and important note is that the RED Hydro levers are 22 (11 x 2) speed only. SRAM will also sell an “S Series” lever that is 10 speed compatible. It looks pretty similar, but will have different internals and a metal lever versus the Carbon lever on RED. 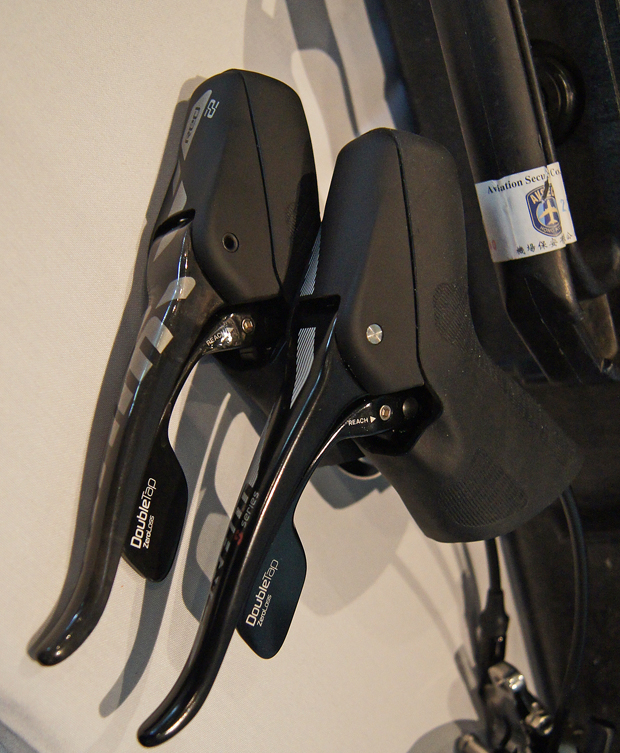 The levers themselves actuate two types of Hydraulic brakes… 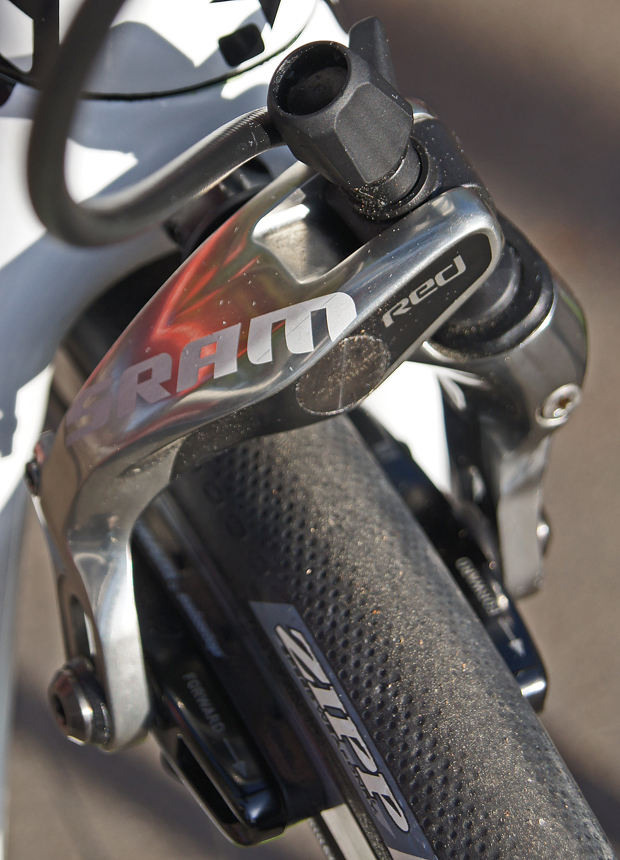 My initial questions on the new Hydro sets were related to adjustment and wheel removal. 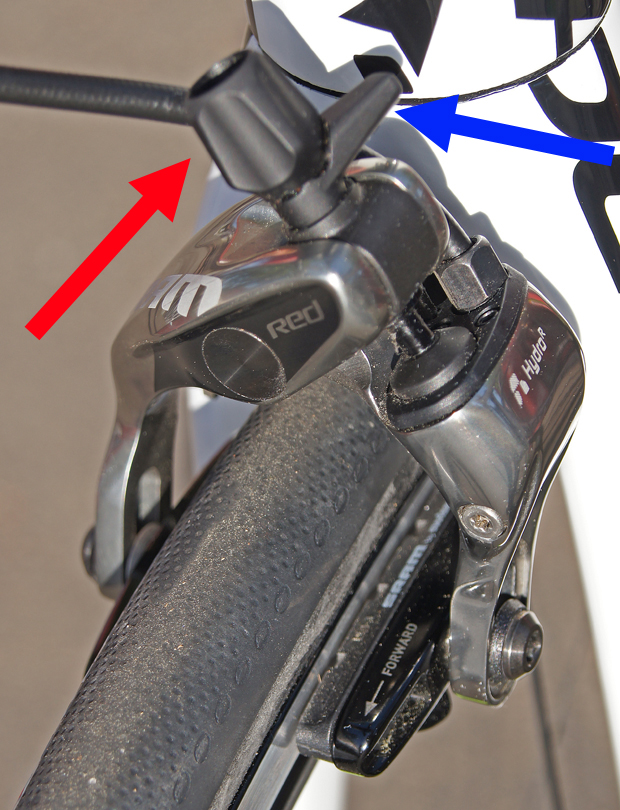 The simple answer is that there is a pretty typical barrel adjuster (red arrow) to get your pads set at the proper distance from the rim (and it will accommodate wheels at least as wide as the new Firecrest profiles). There is also a quick release (blue arrow) that allows the unit to blow open to clear up to a 28c Tire.

Another question was related to any additional complexity with build up and bleeding of a “road” hydro unit.

The answer is that this unit is no more difficult than any existing mountain system. In fact it may be a bit easier because the lever shape has the top hatch pointing up and bubbles will naturally find their way to the top of the system, right where you would want them to migrate to… 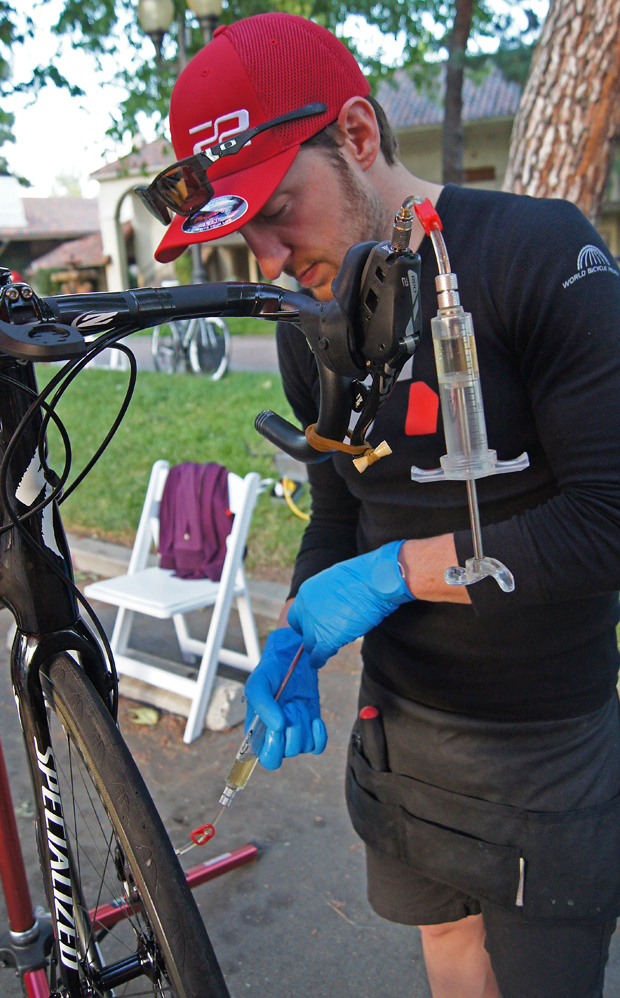 Of course there’s a little more industry buzz about the stoppers mounted to the next bike on the road. SRAM’s Hydraulic Road Disc (HRD) brakes mounted to a plush riding Specialized Roubaix. 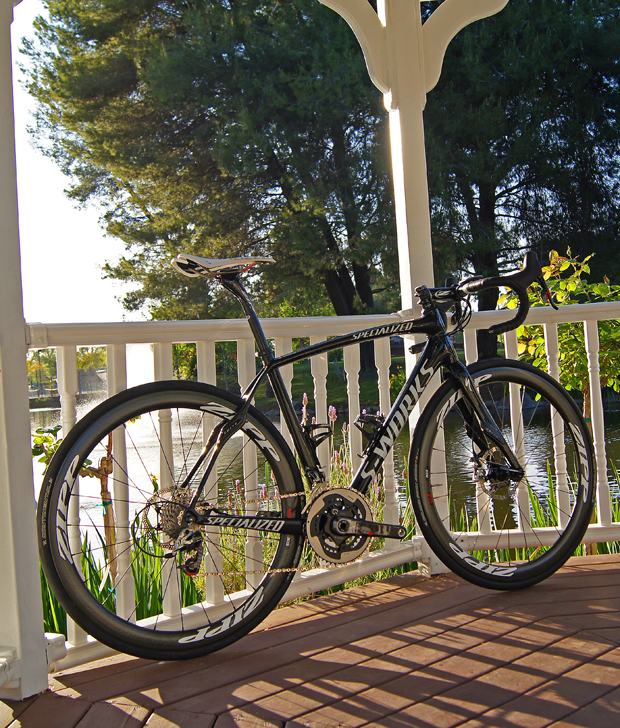 There is no change in levers between the Disc and Rim brake sets, but there’s a difference in the look of the calipers as well as the feel of the system. 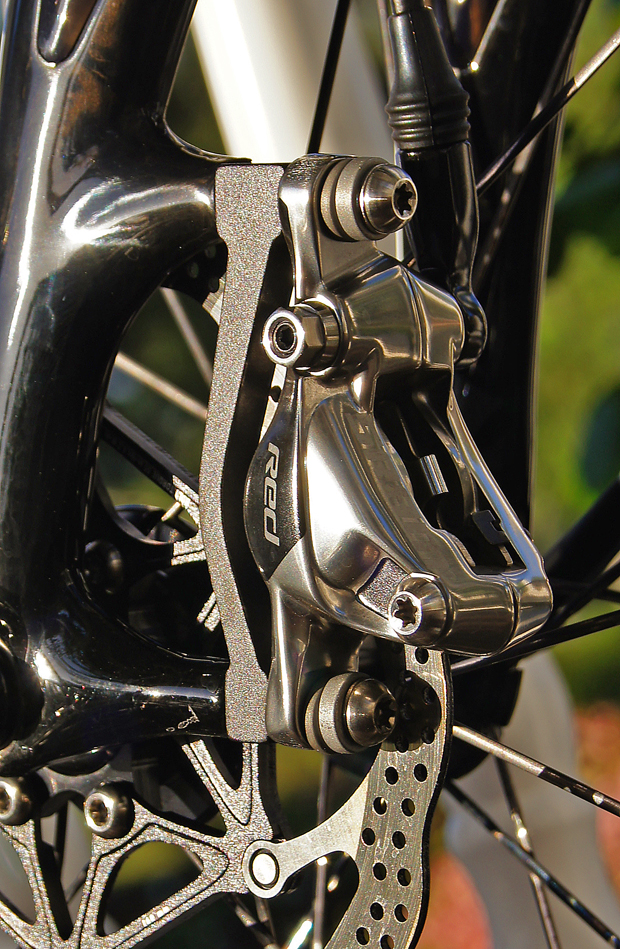 The front Caliper gets a 19mm piston. That drops to a slightly smaller 18mm pusher… 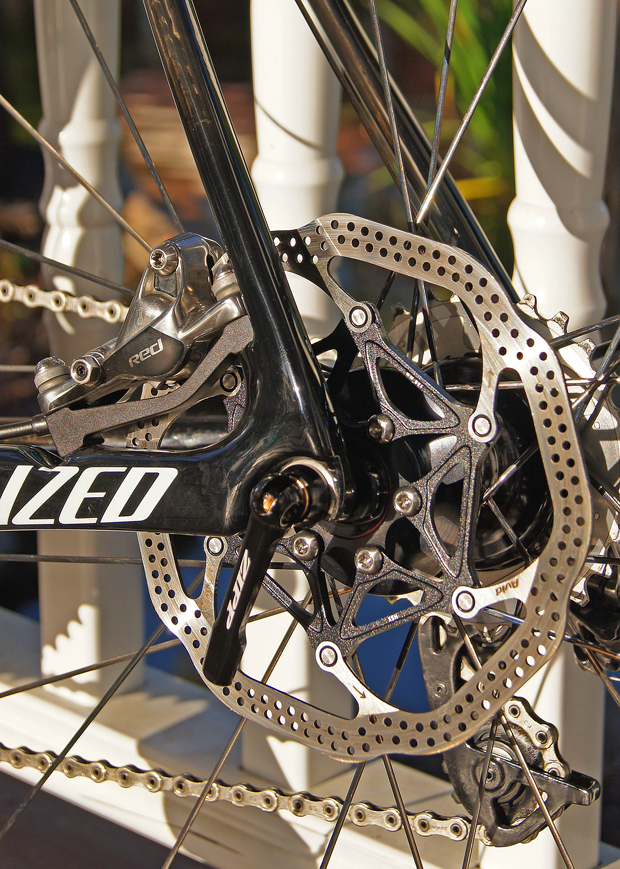 SRAM specify 160mm rotors for the road (for both front and rear). That spec drops to 140 for cross use… 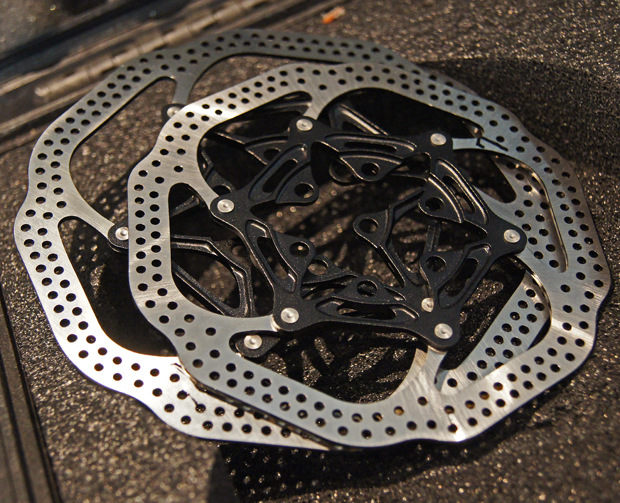 For the test ride, Zipp’s new 303 disc wheel handled the on road duties… 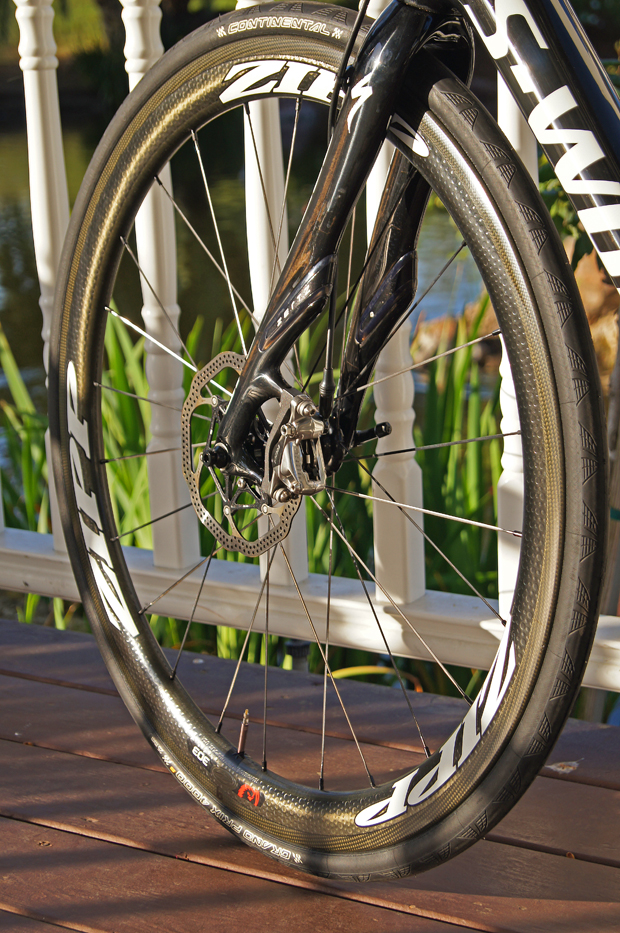 These are standard 303 rims laced to 88/188 disc hubs and come in both clincher and tubular form. These sets run @200 grams more versus their non disc counterparts. That’s mostly down to hub weight (165 and 285 grams front and rear) as well as the front wheel spoke count increasing to 24 for the disc wheels versus 18 for road.

Zipp place a recommended rider weight limit on both the 303 and on their Hydraulic braking system of 250 pounds.

So that’s a lot of numbers to try and absorb when all you really want to know is how well the new Hydro stoppers perform.

The most notable differences between what you’re using now and the HRR and HRD are reduced effort at the levers, a much smoother lever pull and consistent modulation. And you’ll add a bit better initial bite at low speeds to that mix with the HRD.

But the lever action is WAAAY smoother than any cable actuated brake and there is notably less squeezing effort required to get the stopping force you’re used to.

The big difference in feel and braking comes with the HRD (disc).

But that friction free, super light action is now pressing a much more solid surface against a disc. And the result is brake response to effort ratio that currently has no road competition.

While you’ll want to take a few easy spins on these to get used to the greatly reduced effort to brake, there is ample modulation range for these, allowing a light speed scrub all the way to face planting power.

That modulation range is there in virtually all quality of rim brakes, but what’s GREATLY different about the HRD is the linear consistency and accuracy within that modulation range that will never be matched by a stretching cable actuating a relatively squishy pad-on-rim.

Both of these new brake systems require less effort to use, but it’s the accuracy of braking application available that I found most impressive.

And we’ll all get to laugh at the bitchy-ass forum trolls who will sprint to their keyboards to passionately and fiercely shout about the insignificance.

Frankly, as there is no change to the lever throw distance for front or rear shifting, and only a super-slight narrowing between the gears, the folks that already own SRAM Red 2012 will notice very little operational difference for 22.

It’s worth mention though that just last year, SRAM launched Red 2012 and brought with it a LOAD of changes to the entire group. While the lever shape, cable actuated brakes, cassette and rear mech all improved, it was the front end shifting that stood out as the biggest advance.  I think SRAM went from last to first in front mech operation and “Yaw” at the front end laid the ground work for SRAM’s 22 best Shimano and Campy in at least one respect…

SRAM call it “True 22”, and it’s the ability to use all gear combinations without chain rub or any needed trim.

You can completely cross over the chain, going big-big or small-small. I did it multiple times on a couple of rides and while it’s a pretty weird sensation, the Yaw front derailleur technology that made for such fantastic, trim free shifting on Red 2012, allows full function of all gears for the new 22.

The levers are damn near identical to look at. 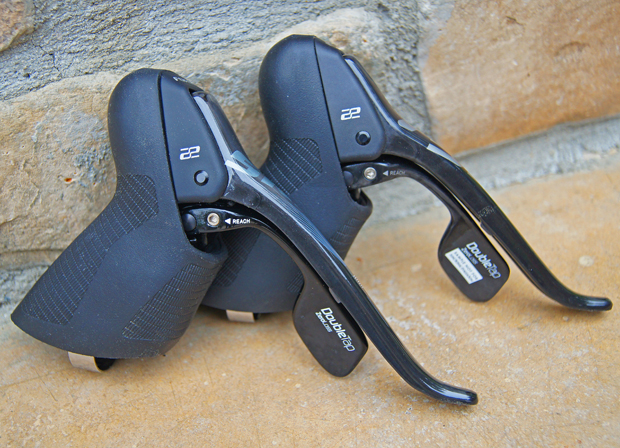 You need to see the printing to tell them apart visually. 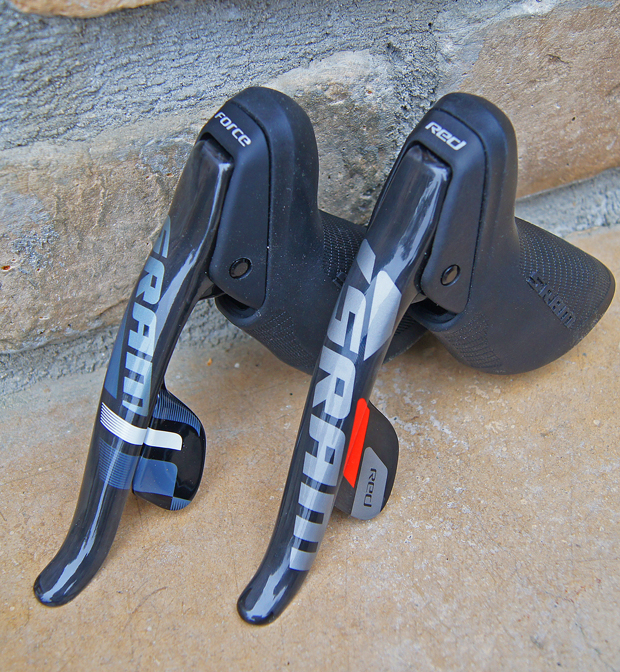 While alternately riding the two groups, you simply can’t tell them apart… The shifting function of Force is virtually identical to Red. Lever throw is the same, both levers feature reach adjustment, both have the shape and textured hood… If not for the fact that I am an insecure elitist with slight weight weenie tendencies, I couldn’t see spending an extra dollar for Red.

Unless… I needed a power meter. 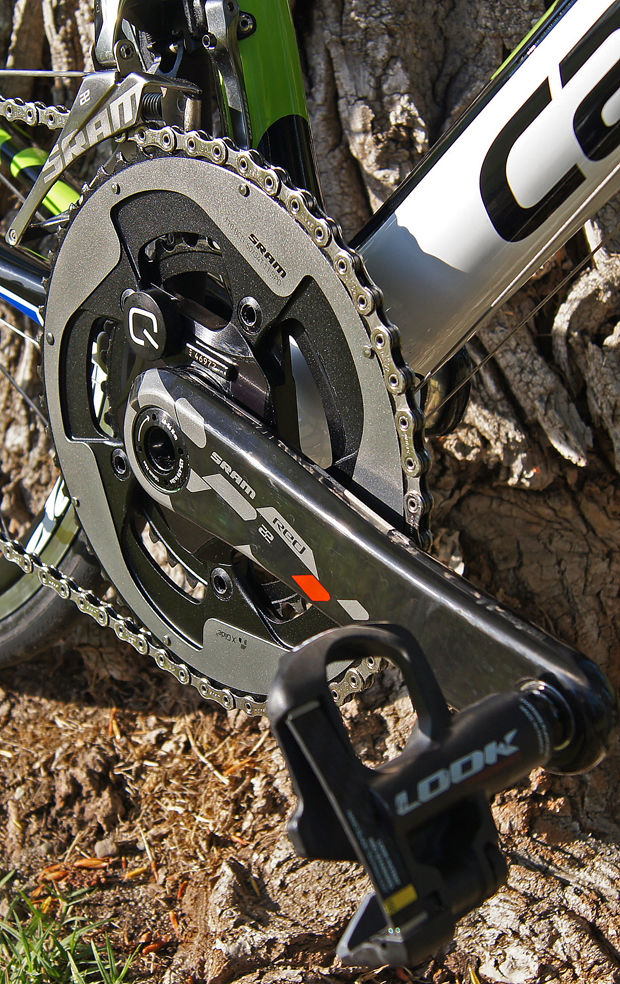 SRAM have uprated the latest edition Quarq unit in multiple ways including new lighter arms, uprated chain rings and more durable power measuring internals that also give you a greater selection of information.

You’ll note though that the new Red Quarq is a bit like the rest of the 22 speed kit in that neither Force nor Red 22 components are 10 speed compatible, so you’re going to be swapping out everything to get that extra gear (which happens to be the mythical 16 on most cassettes by the way)…

I might just do that in order to go Hydro Disc, but for folks staying with cable braking, the function of Red 2012 (10 speed) is just as good…

You can see the full line change at SRAM.COM

Thanks very much for reading,