Aussie cycling superstar Stuart O’Grady, riding for the French Credit Agricole squad, finally came good in the Telekom Malaysia Le Tour de Langkawi with a convincing sprint win at the finish of stage six in Cukai. But the real hero of the day was the young Japanese rider Koji Fukushima who has been in the thick of the action ever since the tour started on the sunshine island of Langkawi nearly a week ago. 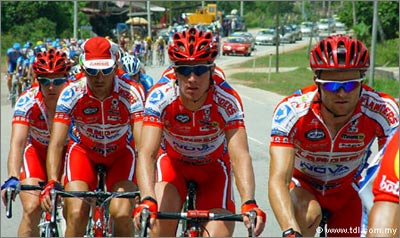 The day’s result sheet lists Fukushima in a lowly 52nd place but that result bears little relationship to the story of the stage which saw him launch attacks at just one kilometre from the start, again at 2.5km and then at 18km when he finally succeeded in shaking off the fast-moving peloton. This time, Palmans-Colstrop rider Peter Wuyts, of Belgium quickly joined him and the well-matched duo settled down to a determined breakaway effort.

The brave duo were destined to stay in front until within the final kilometre in the most nail-biting finish of the tour so far. That meant 118km of unremitting effort under a blazing sun and with some of the world’s fastest riders hot on their heels. What makes their achievement all the more remarkable is that the average speed for the stage was a blistering 47.90kph / 29.79 mph. Their maximum lead was a tantalizing 4min 28sec and with 15km to go and the lead still more than two minutes the biggest shock win of the race so far still seemed on the cards.

But professional bikies are a ruthless lot and, with the big teams taking turn and turn about on the front, the lead came slowly tumbling down: not without a price though as riders lost touch with the speeding wheels in front and yawning gaps opened in the bunch, which finally split into three parts.

Big loser was King of the Mountains jersey holder Roland Green, unfortunate to puncture with just 17km remaining. The entire Canadian team waited for their leader but with the pace hitting close on 35mph they had no chance of regaining the front and the unfortunate Green was destined to cross the line in the third of the three big groups, some 1min 29sec behind the stage winner.

With Fukushima and Wuyts, his hard-working partner in crime, swept up almost within sight of the line, the stage was set for a right royal sprint.

O’Grady played it perfectly: “I knew there were two sharp corners to be tackled in the last kilometre and that gave me confidence as I’m at my best in a more technical kind of sprint where bike handling counts as much as power. “I placed myself just right to come round the Panaria boys down the finishing straight.” The verdict could not have been more convincing as the Australian national champion and Race Down Under winner flashed over the line, his arms raised in a joyous victory salute.

Second for the fourth time in five days was yesterday’s winner, O’Grady’s fellow Australian Graeme Brown, of Ceramiche Panaria: “I blew it today,” he said ruefully, “I made my effort too early and Stuart got round me.” O’Grady, whose efforts helped him climb to fourth place on the overall classification, was happy with his fast returning form: “The nationals, which I won, and the Tour Down Under, where I placed third, took a lot out of me and I arrived in Malaysia feeling a bit jaded,” said the 29-year old from Adelaide, “but I’ve been feeling better with each new day and yesterday I felt like I was right back on top form so I was well ready to go for a win today.
“I can’t remember the last time I won a bunch sprint so that made the result especially satisfying.”

The Saturn team must be feeling pleased too. After riding hard all day on the flat run along the coast road from Marang in defence of Aussie Nathan O’Neill’s yellow jersey of overall race leadership, they now hold the first three places overall, with American riders Tom Danielson and Eric Wohlberg in second and third places respectively.

They can’t be complacent though for right behind them in fourth and fifth place are the two Colombian riders, Hernan Dario Munoz and Freddy Gonzalez, who are on the strong Colombia-Selle Italia squad. Both the South Americans are formidable climbers and Munoz was last year’s overall Telekom Malaysia Le Tour de Langkawi winner after his storming ride at Genting Highlands, a formidable climb which is likely to prove to be the Tour’s decisive point this year just as it was last time out.
Though they lead the other Asian teams overall, this time the Iranian squad had to give best to Telekom Malaysia in the Asian team standings but they again fielded the best individual Asian on this stage, this time with Mahgreb Sohrabi, who finished in 20th place with the front group.

And what more can we say of Koji Fukushima? This shy but very friendly rider is doing just what it takes to become noticed – his attacking style is what wins both TV time and newspaper column inches and that makes him a sponsor’s dream, Could he become the first Far Eastern rider to reach the top ranks of European pro sport? Don’t be surprised to hear news of a contract signing before much longer, especially if he continues to perform as he did today.

What makes it all even more remarkable is that Fukushima lost his girlfriend to cancer less than two months ago: “My morale was very low at the start of the tour but I have been determined to do a good ride for my team,” he told reporters.