Day two, walking round the racetrack and I was lucky enough to hook up with a few old friends and a few new acquaintances. One of the first stops for me was with a company that Pez have been working with for better than a decade. It’s always a pleasure to stop in with the folks at Albabici.

Importers of primarily premium Italian gear, Albabici have been at it for quite a while. Tucked into their coastal California offices, they handle several of the “it” IT brands.

Stop one for us was with their helmet company of choice, Limar, who have updated a few of their lids as well as partnered with a couple of VERY well-known Grand Fondo events.

Virtually nobody could miss their flag waving newly updated 777. 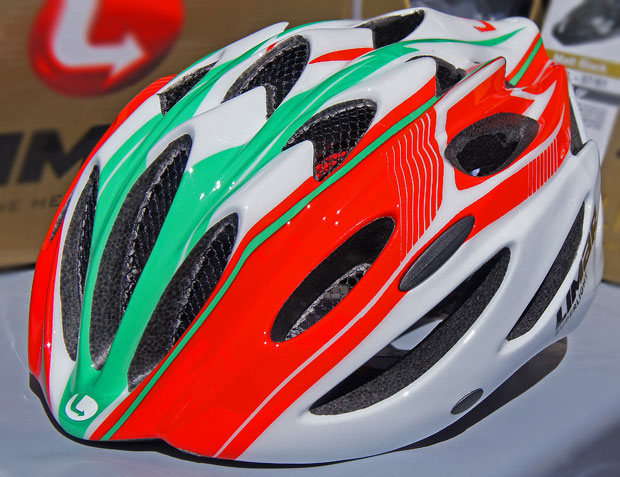 Since my last go round with the product, Limar have updated both the internal channeling and the retention system on this model.

This version is their Gran Fondo Giro d’Italia event series official helmet… (The Sea otter edition of the ride was a BIG success). 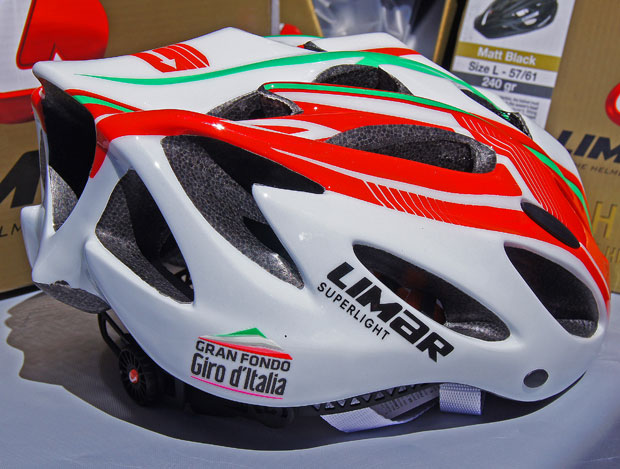 Pretty light at 225 grams (M) for the US market, the 777 now has the Competition + retention system that is lighter, easier to operate and more secure than the past system.

That ease of use also applied to Limar’s new Ultralight+ 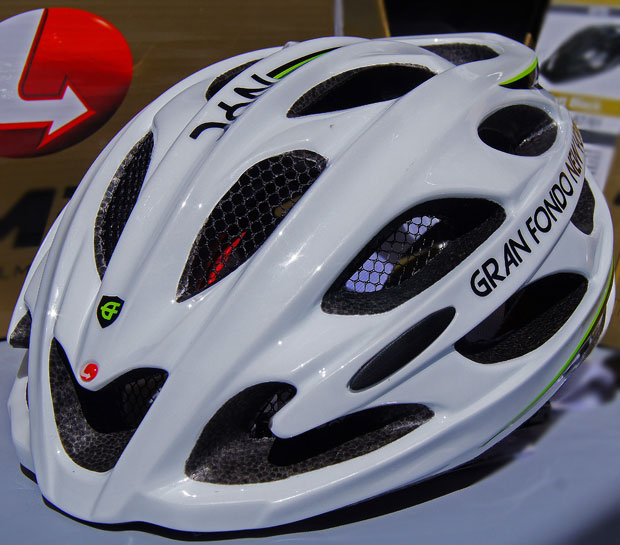 You’ve likely seen the previous fly-weight versions from Limar in the past, as their PRO104 and Ultralight held the mark in Europe for a while as the lightest safety certified road helmet in the world.

The newly designed Ultralight+ leans toward the weight issue but Limar wanted better performance on the bike, versus just the scale. With that, they’ve taken the Ultralight and added larger ventilation openings at the front… 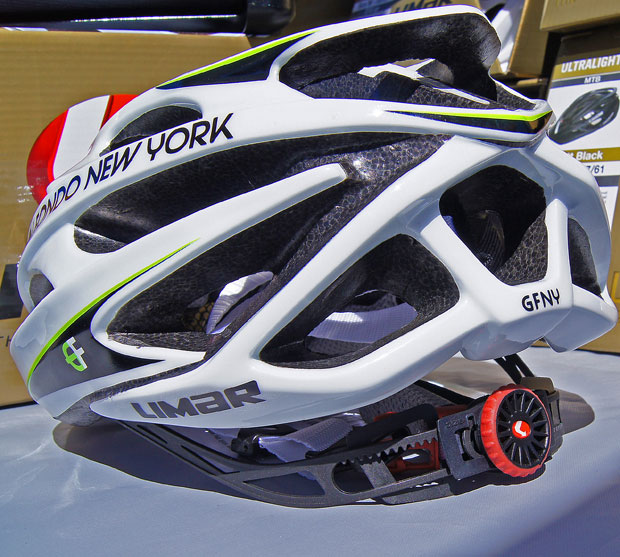 …as well as giving the back end a small spoiler that acts to more actively draw air from the upper rear of the helmet.

The U+ also gets a retention system update that is again more secure, easier to adjust and features a much more head friendly height adjustment. 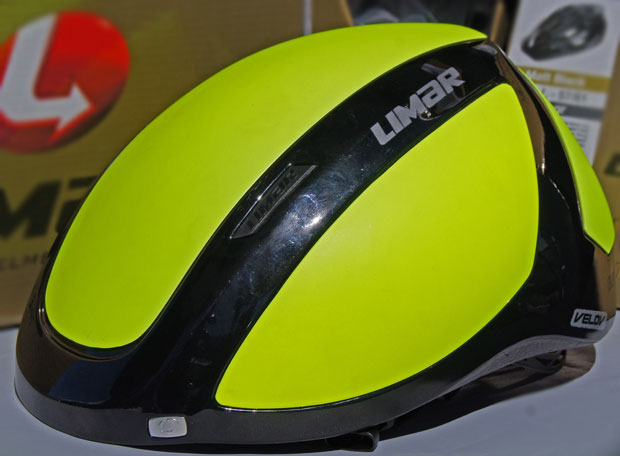 This is a great year round solution (though the weather may be crazier lately…) for commuting and light performance duties.

It features removable panels (in a range of color choices) that allow you to mix and match your air flow to your temps, as needed. 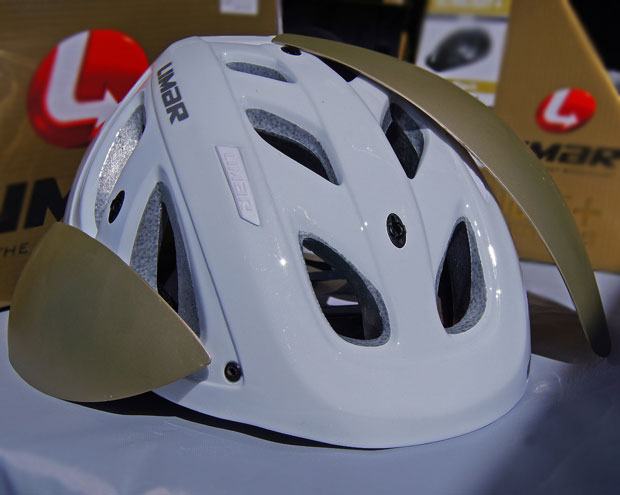 Limar are planning to sell a couple of different liner solutions as well that will further expand the cold / wet coverage.

The 777 and Ultralight+ are available for purchase now. The Velov has passed Euro testing and is currently going through North America’s (pretty silly) certification. You can find your closest dealer by contacting Albabici.com.

Albabici also represent Nalini Clothing in the US and the kit combination that stuck out for me this year is their Brionia Ultralight Jersey and Pro Ultrastretch Bib Shorts.

Starting with the Jersey, it’s immediate to feel the extremely soft hand. The materials are designed for compression through and through (and the fit will be best suited to slim folks). 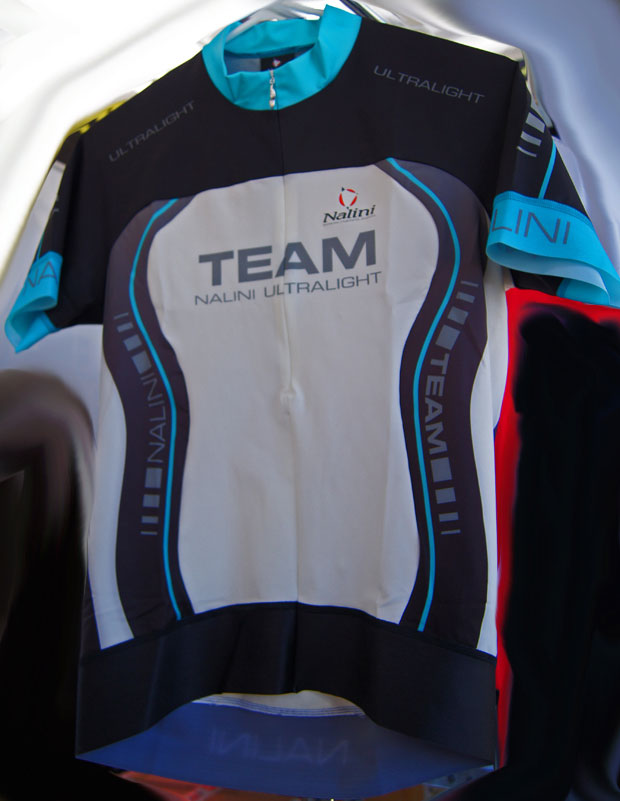 The sleeves and the jersey waist are made for very thin and grippy material more commonly used at the hem of upscale bib shorts. 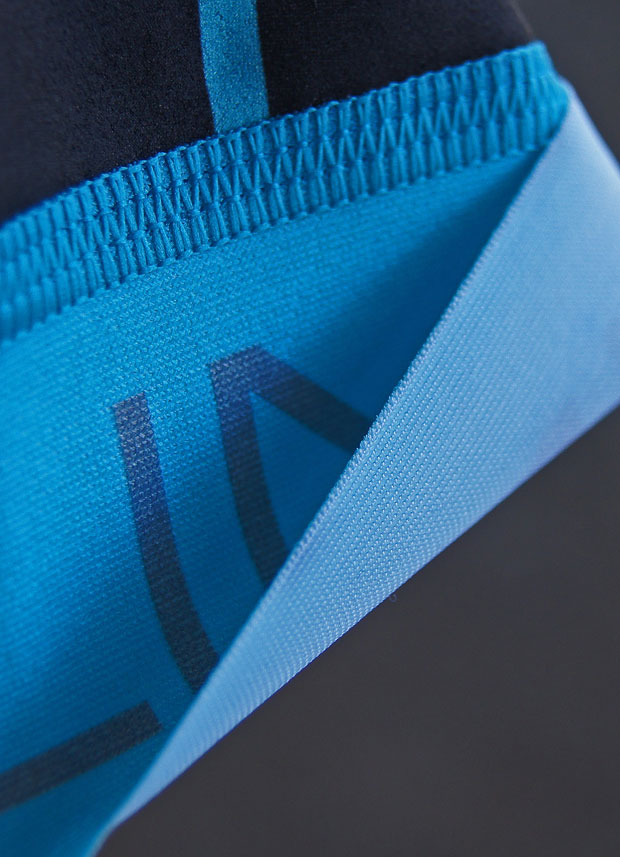 The stitching throughout is really pretty impressive… 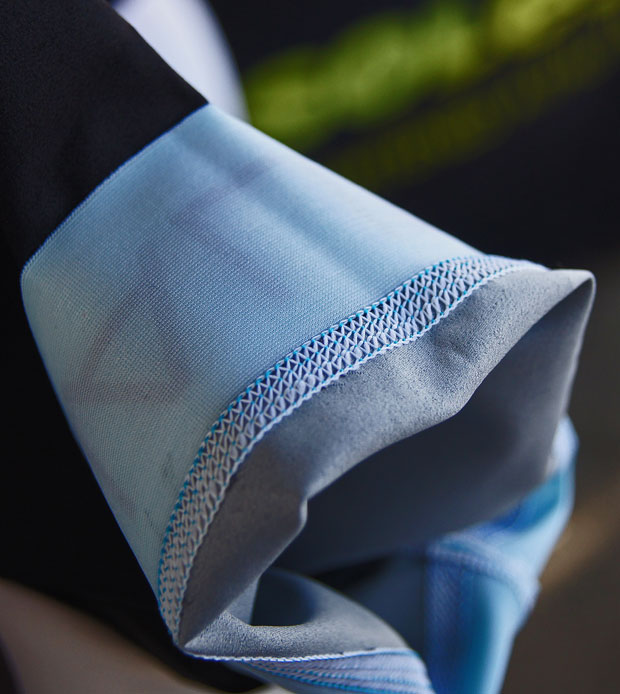 The Ultrastretch/Ultralight Bibs are a solid match for the jersey in fit and feel.

They also feature the body hugging compression material at the leg opening. 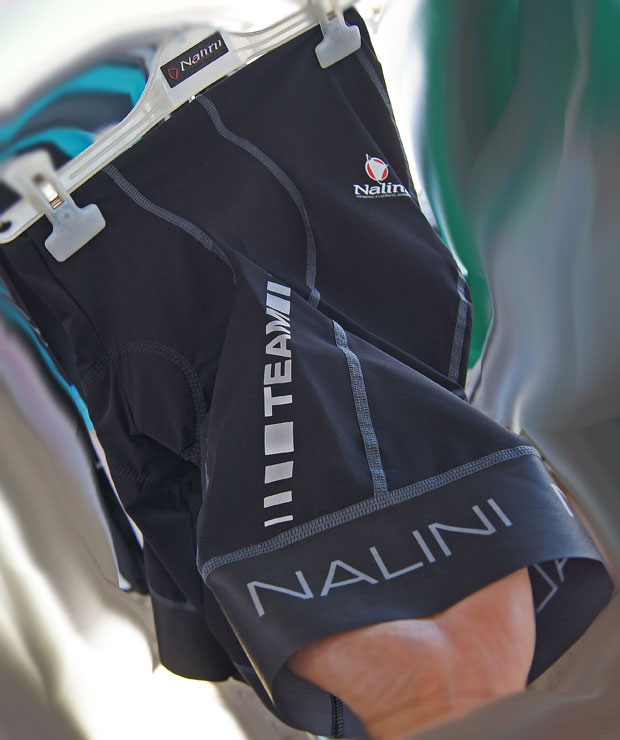 They also use a form fitting and very soft material for shoulder straps. 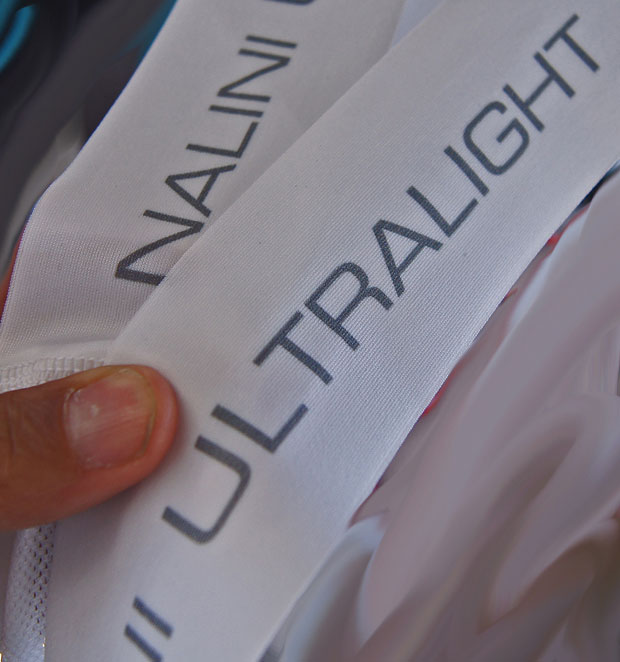 And while chamois selection is a personal pref thing, the unit on these shorts is a much more technical pad that features 4 separate padding densities and very good movement. 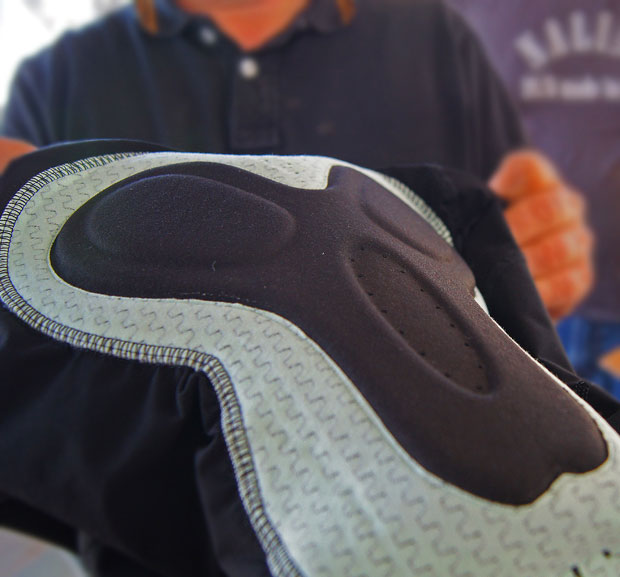 Of course Nalini have a lot of options available at quite a few price levels, many with more forgiving fittings including a jersey that looks to be designed especially for my Arizona summer. 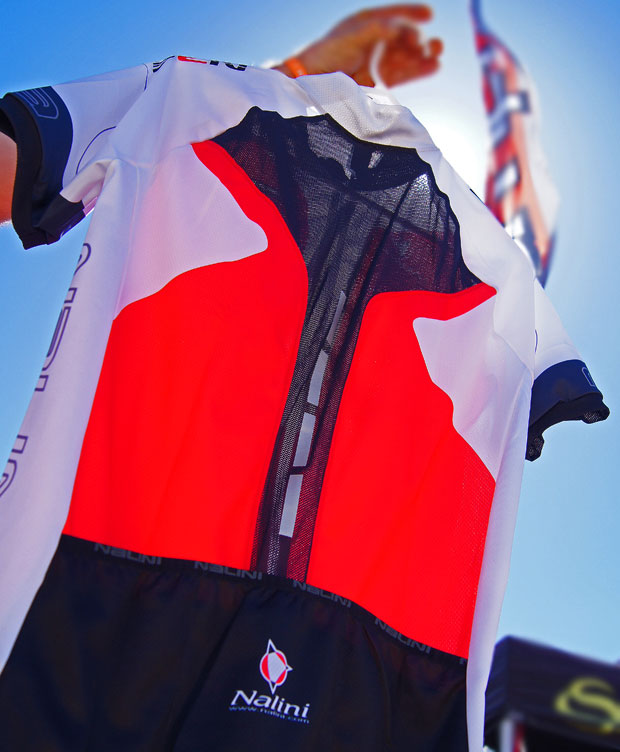 All of these are available at Albabici’s dealer/retailers right now.

Cervelo’s new P3 was hidden away from most prying eyes, but I was lucky enough to be rolling with the top flight media guys at TRUEfor a hands-on. 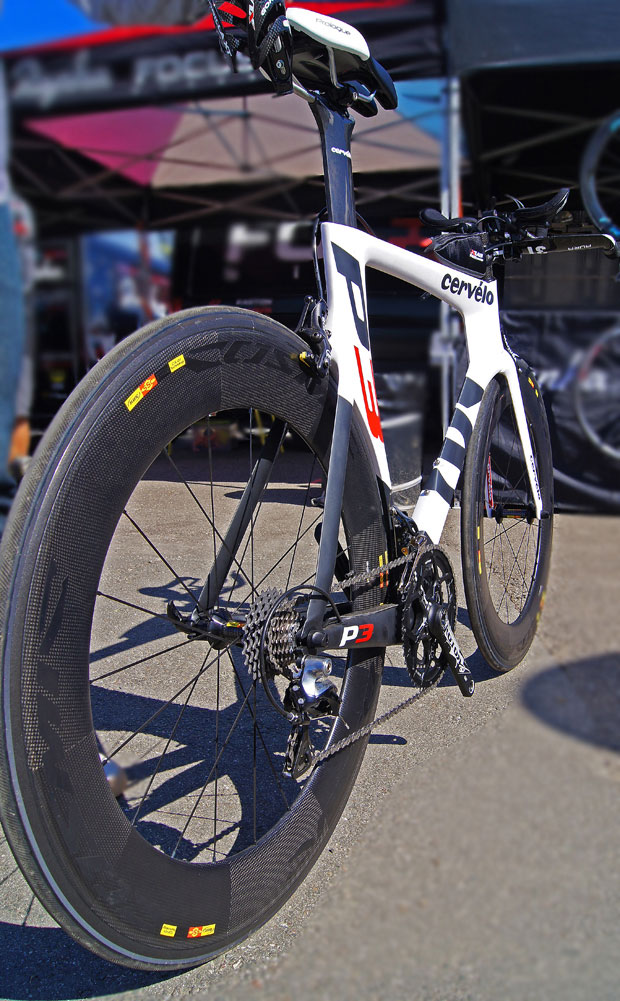 “Sleek” seems an understatement to the overall design of the latest TT rig. The 3 is very close in performance to its P5 big brother and shares a few of the same tech strokes, but will cost you roughly half the price. 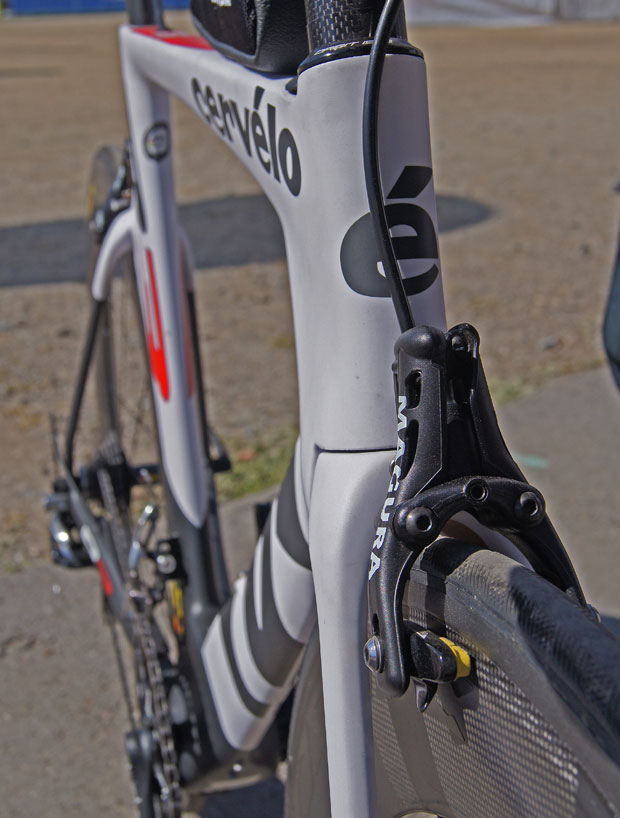 Both front and rear get the Magura Hydro brake treatment. (And yes, I want to try these and /or a set of RT8 brakes mated to an aero road frame with SRAM’s new Hydro levers…)

The front end has a needed fork stop that will keep these heavily shaped / deep sections from turning in to one another and cracking what is an otherwise light/thin section of carbon. 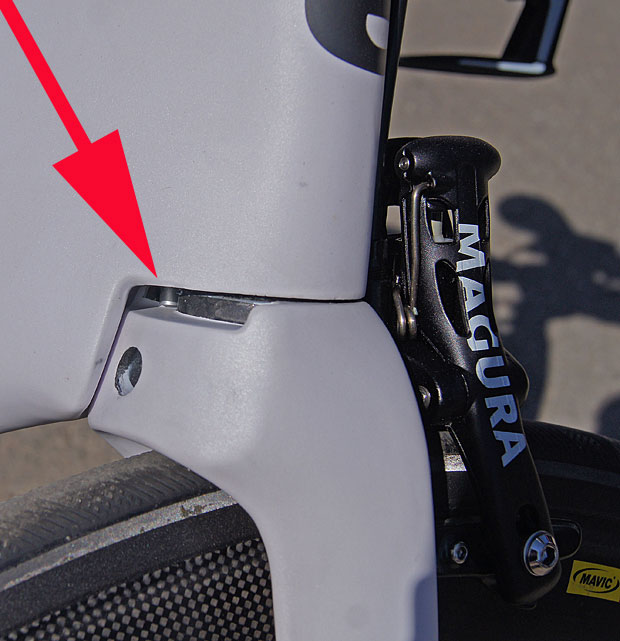 The rear end is all business with a wheel hugging slot that’s been redesigned for better aerodynamics when used with wider rims. 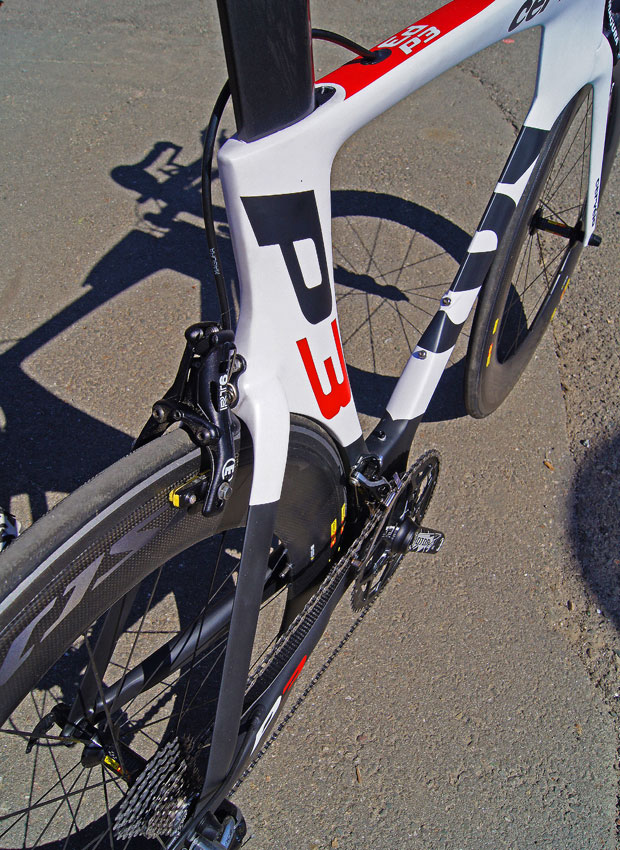 And while this is their D-Ace 9000 model (yes it comes with Rotor Cranks, Magura stoppers etc. and still only runs you $5400) the frame is ready to go one or two better with an external battery mount to take things electronic. 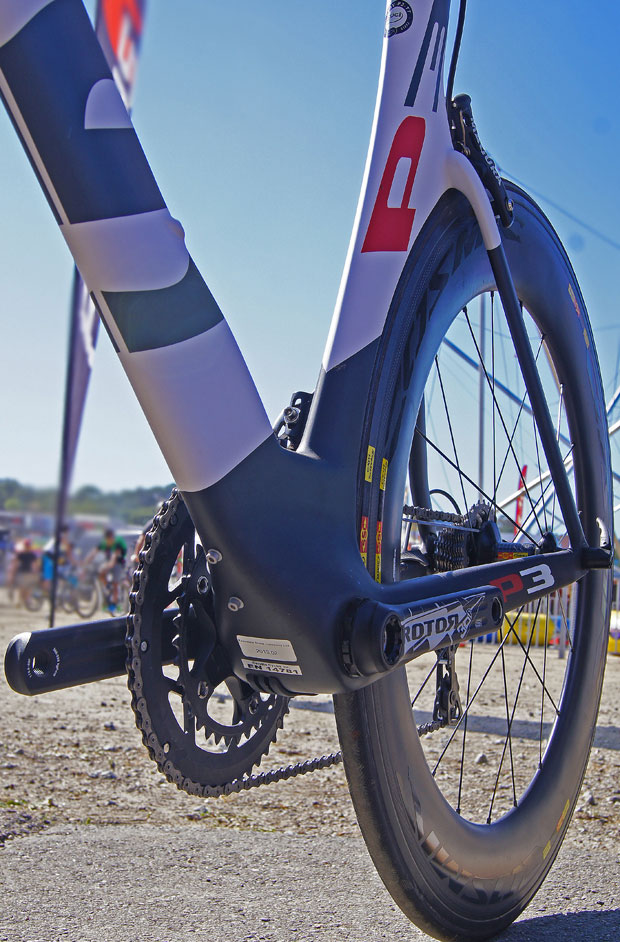 But then anyone throwing down the dollars for Di on a P3 should be shopping at a store that will build them a custom internal battery solution.

These are ready now and you can catch more at Cervelo.com

Our next stop was with the guys at Devinci Bikes for a look at what is an expanding lineup. 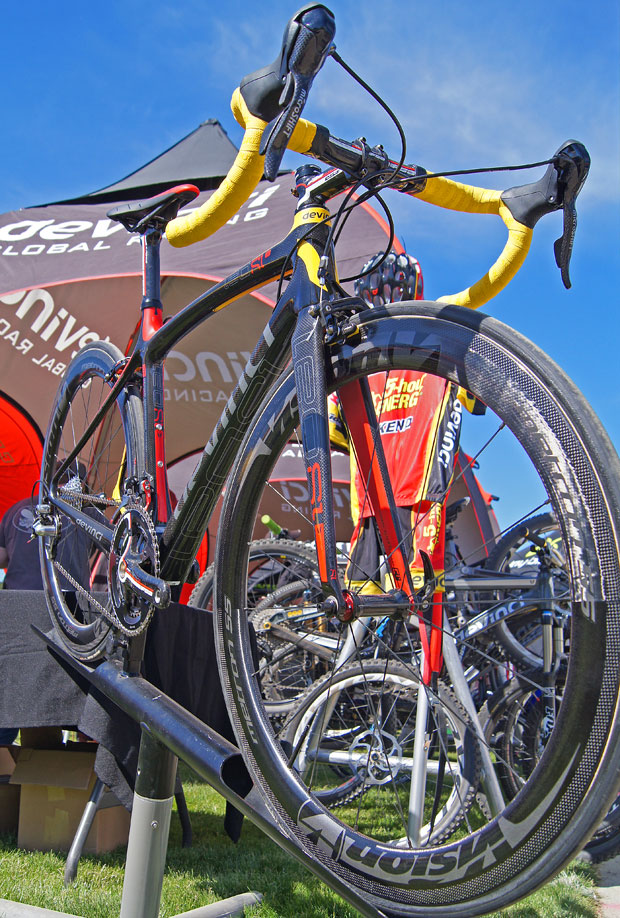 I’m guessing that it will rate fairly well as a race tilted ride, as it recently rolled up the overall win at the 2013 Redlands Classic under Francisco Mancebo and then hopped over the Atlantic to grab 2ND overall at the Vuelta Castilla Y leon. 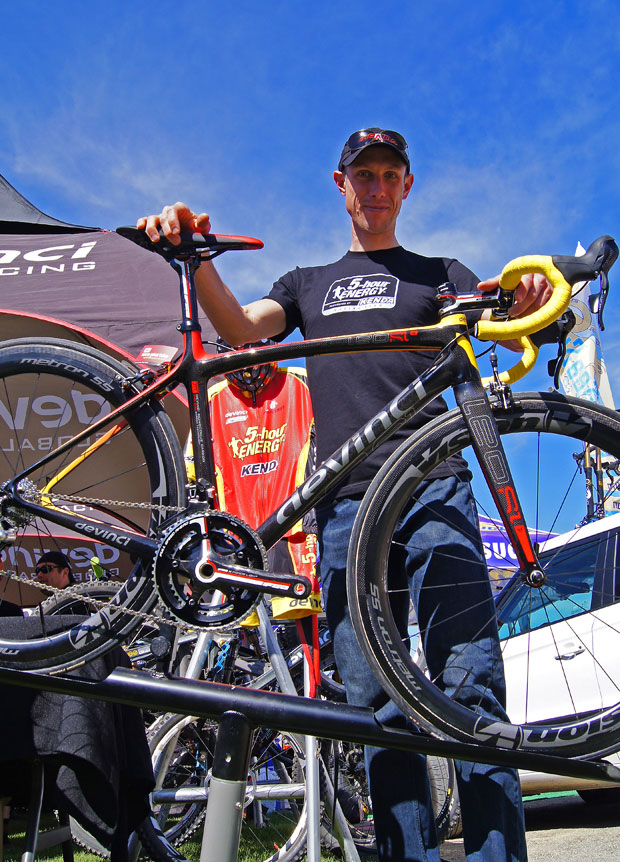 We caught Nate English, also from the Kenda 5 Hour Energy team, taking a well-earned break, soaking up a little sun and some calmer training miles round Monterey…

You can see the full range (including a couple of pretty damn nice Mountain bikes) at Devinci’s Web Site.

Wahoo Fitness were also on hand and their product line has really filled out over the past couple of months. 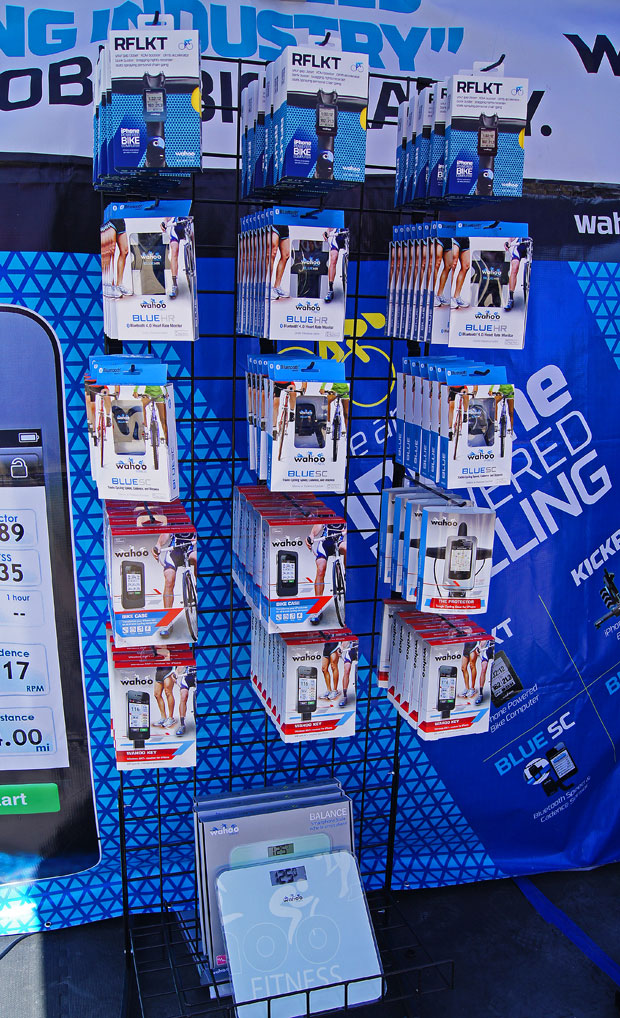 Arguably the best on-bike i-device interface available, their RFLKT head unit does darn near everything you could want. 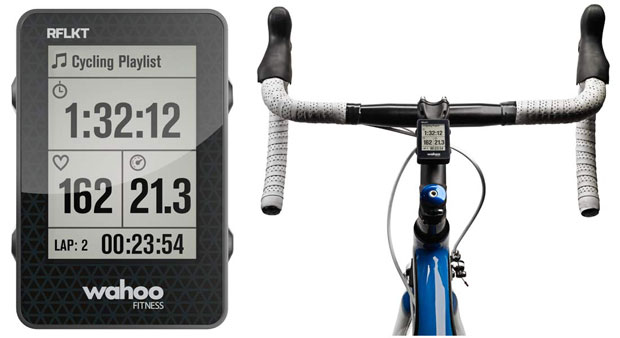 Four nav buttons run this in a pretty simple/logical way and allow you to control music, the data displayed and the functionality of Wahoo’s updated 3.0 fitness program. It will also work with several other fitness programs and pairs with Wahoo’s new Speed, Cadence, Heart and other sensors as well as working with loads of other iPhone (or ipad or iPod touch) compatible programs and hardware.

Wahoo brought along their new KICKR trainer as well. 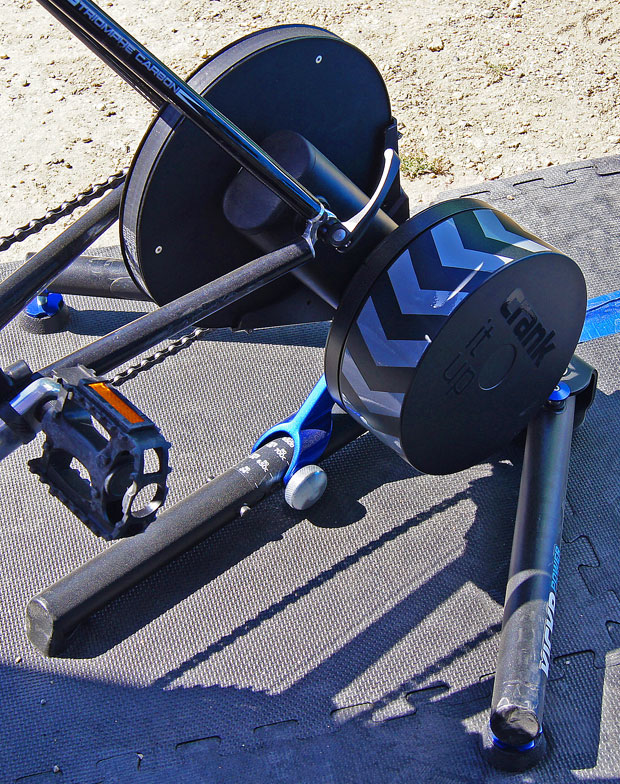 This unit is also multi-I device friendly and features a software suite that allows a lot of individual workout controls to let you dial into exactly the type of training you’re looking for. The KICKR goes beyond simple power levels to use an ERG mode that will hold a specific wattage target that you can’t hide from. It will stick with the selected resistance regardless of cadence or speed.

There are several other selectable features and rages as well…

And this unit is as tire friendly as you can get because there is no back wheel used. 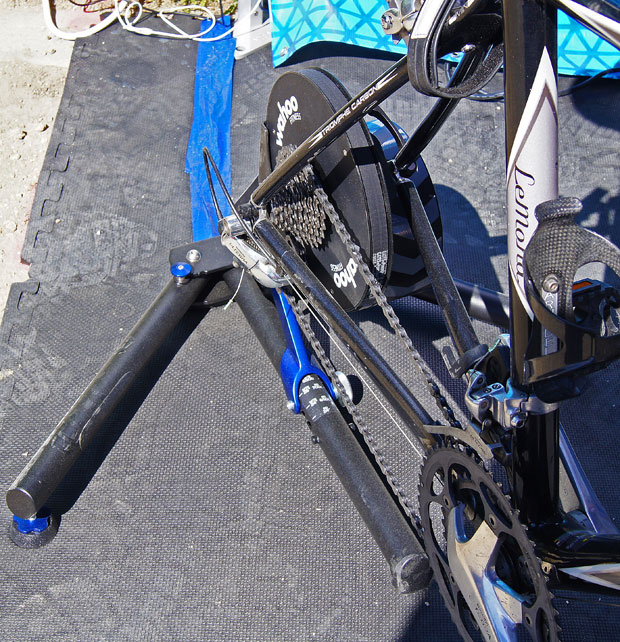 You’ll need a spare cassette, but you’ll not need your rear wheel as the bike plugs directly into the trainer itself.

The Kickers are in short supply right now, as the first load sold out almost immediately, but more are on the way and there are some units still at retailers.

For more info on the full range, see their site at WahooFitness.com 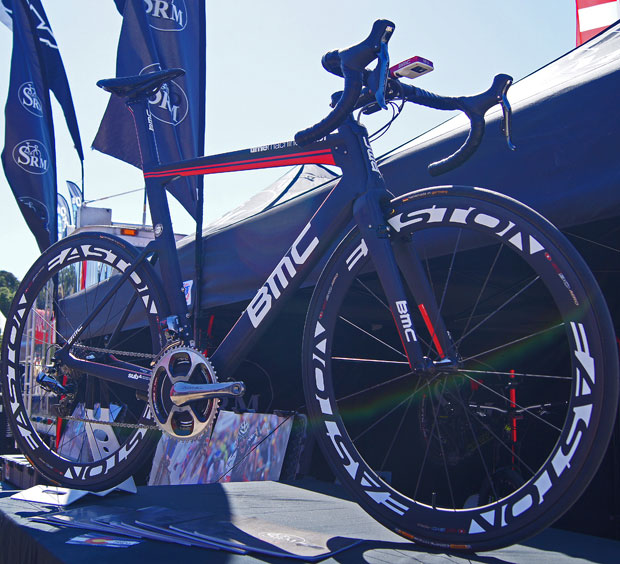 BMC’s TMR01 is damn cool in its standard Di2 trim level to be worthy enough of mention. The Integrated brake set up, internal Bat mounting and aero shaped smoothness is lust worthy enough all by itself.

But SRM up the score with the D-Ace crank integrated power unit and they’re moving forward with their new Aluminum Power Control Head unit. 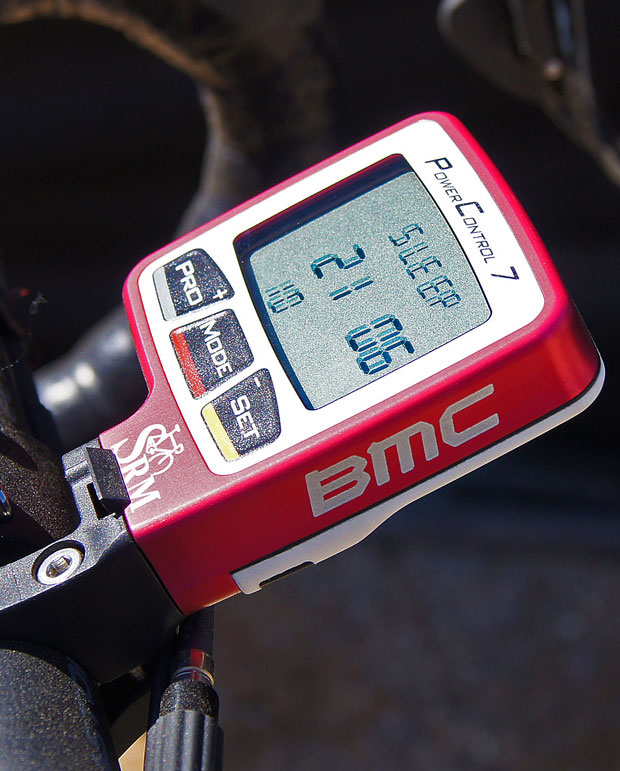 SRM will not only offer this in multiple colors but are down to custom etching the head units as well.

I couldn’t get with one of the SRM guys on site for cost and availability, but you can hit them up directly at their sites for the Q and A.

The TMR01 are selling now (though they have more customers than bikes right now, making these a little harder to find).

So that’s it for gear, but I don’t want to sign off without tipping the cap to one of the best development efforts I’ve seen in a long time.

I caught the Little Bellas as they were coming into their camp after a ride. 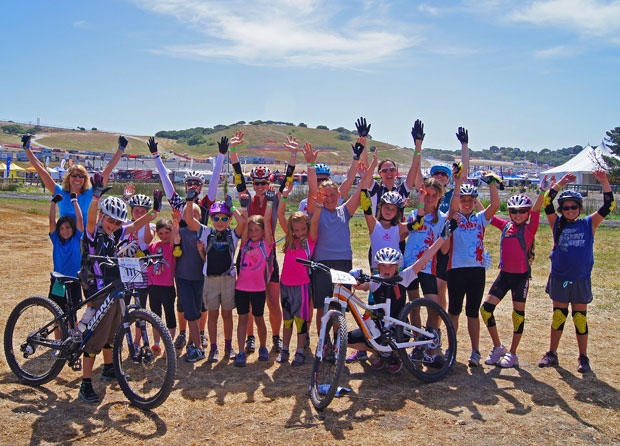 This group was having so much fun that they sucked me in from my narrow minded bike gear hunt and completely spun my head back around to how incredible our sport can be.

This isn’t about putting on a number plate and crushing people, and it’s not about spending as much as you can on the latest greatest equipment. In fact, watching these kids walk around and ride together was a fantastic reminder that putting kids together in sport is a great way to grow as people, developing friendships, setting goals, learning self-respect and respecting others (in pretty equal measures) and getting a fantastic lesson in responsibility and accountability.

I had very little time to speak to the people running this… Just a few seconds with Sabra Davison (Little Bellas Director) to snap a picture as the girls had a schedule to keep.

But while they were getting their jobs done, they NEVER seemed like they realized how well-mannered and responsible they were being… They were too busy laughing and enjoying things to recognize that they were functioning like a well-oiled machine.

I was pretty floored. 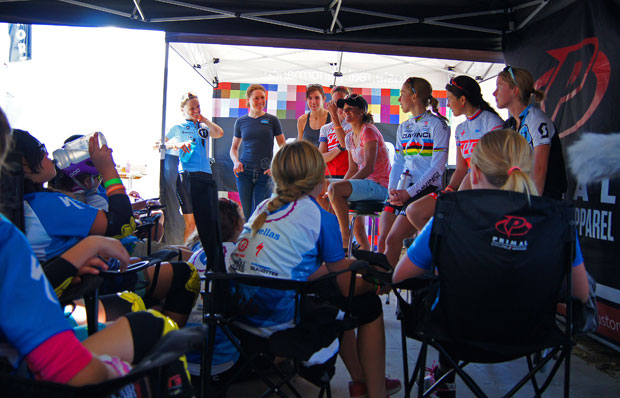 I rolled by the Primal Wear booth to see a who’s who of women’s Mountain Bike Racing taking the time to serve up a Q and A for the Bella’s that virtually no journalist could hope for.

More than a couple of Rainbow Jerseys made their way over to let the girls know what they like about the sport, how hard the work is and how much fun it is to really put in an effort, almost regardless of the outcome.

Well Done Bellas, Primal, Specialized and the host of others that made this possible.

Now, Before you log off, you should send these girls some of your money. 5 bucks, 500 bucks, just send em something because they deserve it and you can afford it… Go here and get it done…

Thanks for reading!
Charles Manantan

Frankfurt Classic Opens The German Races In May

Lotto Belisol: The nine rider for the Giro d’Italia