Petacchi Vs. Cipo: The Next King?

Is Petacchi really the Heir to the Lion Kings Throne? Most of the Media have branded him that, but let’s look at the numbers and come to a pretty damn quick conclusion.

2003 was a tremendous year for Fassa’s Alessandro Petacchi. No two ways about it, he was the man to beat when all out speed was the measure. Notching victory after Victory in 2003, the guy had a break out season and did so at the relatively young age of 28-9. 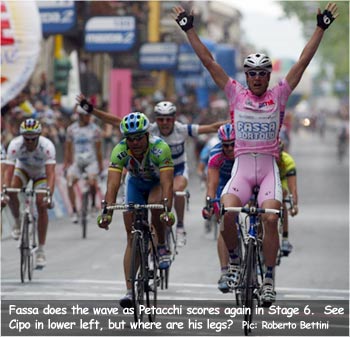 I count 16 wins this year (someone email me a correction, as I might have missed one) and that is truly a monster season. Add 14 wins last year and 9 in 2000 and you can see a trend! But is it evidence that a new King is to be crowned?

Simply put, No yet, not even close…

Petacchi turned pro at the tender age of 22 and is 28 this year, having notched 27 since hitting the pro ranks. The King turned pro at 22 also, but had tallied a couple more arm raisers than Petacchi by the time he hit 28? How bout 55 more for a total of 81! Mario had 45 wins at 25, to Petacchi’s 1, and had his first 15 win season at 24 (followed by 16 at 25) while Petacchi broke that barrier just this year. 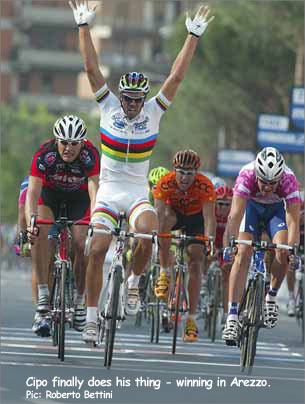 To be fair to Petacchi, he could very well match or exceed Mario’s totals and take a few single season records. But it will be a long haul. This year was stunning for Petacchi at 16 wins and 28 years of age but Petacchi will need to have “break through” 16 win years for a while just to get past the Castle Moat, much less have the Media calling him the “Heir to the Throne”. Mario had 18 wins at 28, 17 at 29, 16 at 30, 16 at 31, 19 at 32, and again, Petacchi will need to dig himself out of a 55 win hole along the way, so he will need better numbers than those.

Take nothing away from Petacchi’s year. The guy made every other sprinter in the field look like they were towing donkeys! Not only could very few come around him, very few could even draft him. But for those of you that have only been watching the sport since OLN started covering it, that’s exactly what Mario was doing to people from his second year on the road… Don’t think that because a 28 year old Petacchi does that to a 36 / 7 year old Cipo, that it is an equal measure of the men.

If you are expecting Alessandro to draw the sword from the stone, please note that the stone lies beneath about 40 feet of concrete, and Petacchi didn’t start looking for a pick axe till 2003.

Petacchi is the stud of 2003, and will probably toss in several more wins in the next few years, but save the “King” talk till at least 2009…