Pez Bookshelf: “Hellingen.” As in Hell

Bike races come in a rich variety of flavours—the Big Kahuna of stage races is the Tour de France, but the Cool Kids go for the Giro d’Italia; there is the Race to the Sun and the Race of the Falling Leaves; races that began at the dawn of competition like Liege-Bastogne-Liege and races that have popped over night—Qinghai, anyone?

And some, year after year, never fail to surprise or to enchant, and where a victory earns cycling immortality. Of the Classics who cannot love de Ronde van Vlaanderen, the glorious Tour of Flanders? And what makes it great is that you have to ride uphill over big rocks to win. This is crazy and you know you want to try it. 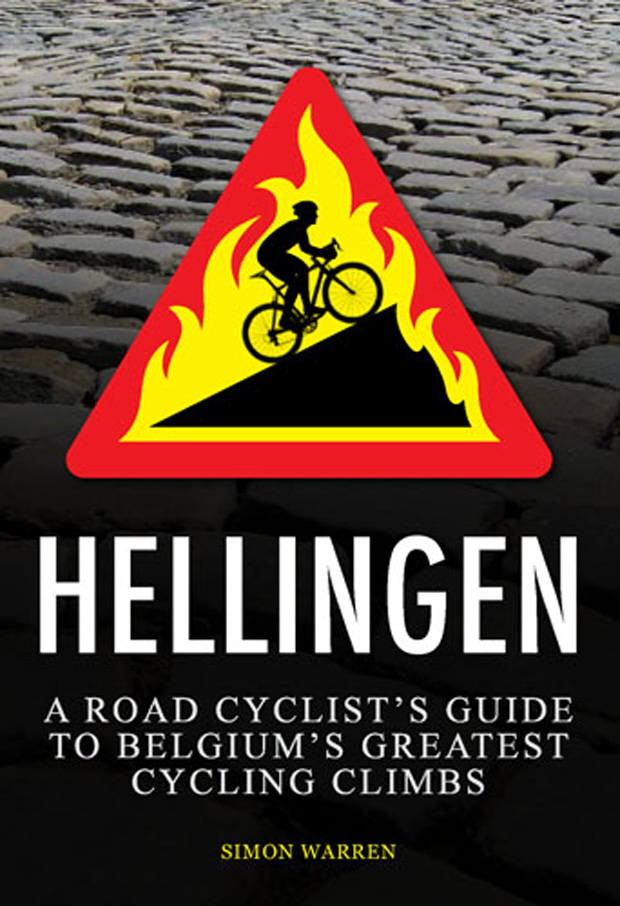 “Hellingen: A Road Cyclist’s Guide to Belgium’s Greatest Climbs” is the magic lamp to rub to make that wish come true. Simon Warren, author of a guide to British hills entitled “100 Greatest Cycling Climbs” and its companion volume “Another 100 Greatest Cycling Climbs,” has widened his horizons, crossed the Channel and taken on the famous climbs of cycling-mad Belgium. There are only 50 climbs in this pocket-sized volume but they include many of the most famous climbs in Flanders and Wallonia.

The book opens with his account of luring his family to Belgium in August with the promise of tourism, steak and frites and, obviously, beer. He writes of how cycling is so woven into the fabric of life in Belgium and one of the great joys of the sport: even if you could buy a Formula 1 car you would have no place to drive whereas we can get on our bicycles and ride up the same brutal, painful, tortured climbs as the pros do.

The first thing to do is to figure out how to ride the cobbles as most of us don’t have much of an opportunity. The author has a nice page devoted to technique, which seems counter-intuitive as you have to relax while being pounded by the pavé and trying to be smooth while slamming into the rough surfaces or avoiding gaps. Reducing tire pressure helps and running wider tires too. It is also a good idea to make sure all the fasteners on your bike are tightened before doing this. By the way, the author says that “cobbles” are only naturally occurring stones whereas cut and finished ones are called “setts.” Not that this matters since they generally appear to be dreadfully finished and put in place by drunks. 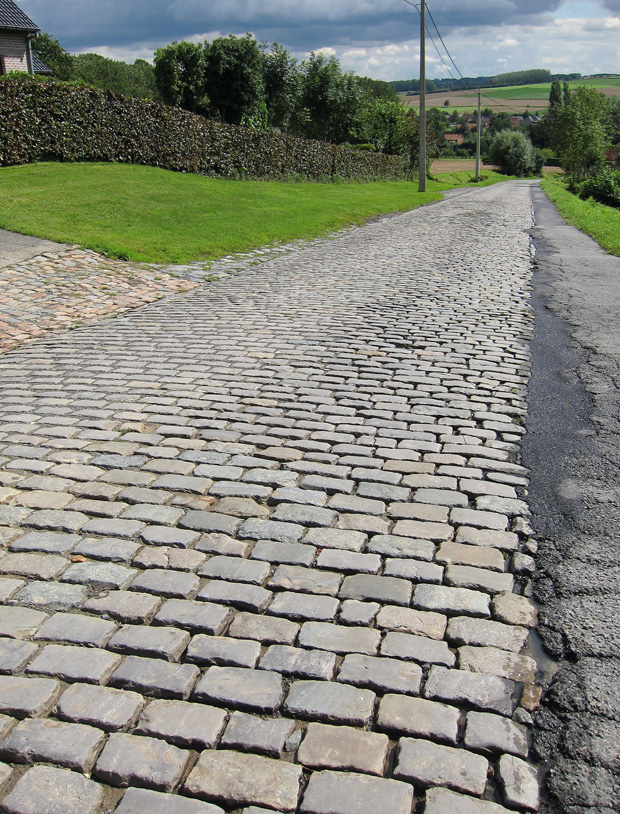 Reflecting Belgium’s dual nature (Flanders/Wallonia; Flemish/French) the book is divided into two sections covering the climbs in question. The “Hellingen” as the climbs are known in Flemish are short and steep and often cobbled in Flanders while in Wallonia they tend to be longer, almost as steep and generally paved with tarmac of varying quality. Each section covers two pages, with a picture of the road surface on the left and text about the ride, how to get to it and of course a rating out of 10. Apparently “1” is considered “hard,” while “10” is “almost impossible.” 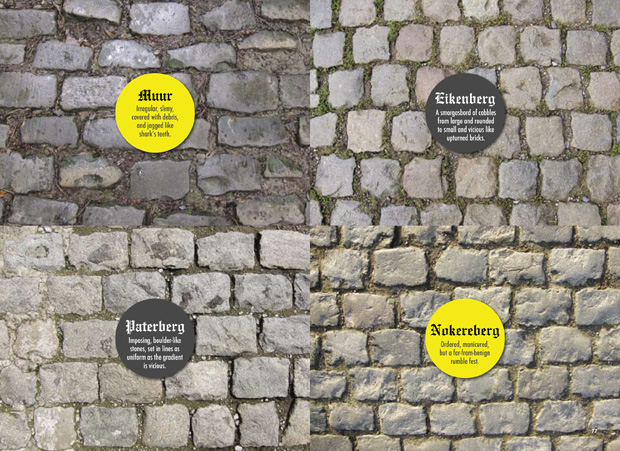 So in Flanders our 25 climbs include a fair number of legends, like the Kemmelberg, Oude Kwaremont, the Paterberg, the Koppenberg (9/10) and the Muur-Kapelmuur in Geraardsbergen (10/10). After you have chosen likely candidates there is a chapter that allows you to pick the climb through its road surface, much like a connoisseur’s guide to wine. Swirl around the idea of the Koppenberg: “Anarchy beneath your tyres. Slippy, steep and utterly random.” Or the Molenberg would be more to your taste? “Stones? They are more like asteroids floating in space. It’s like trying to ride over Stonehenge.” 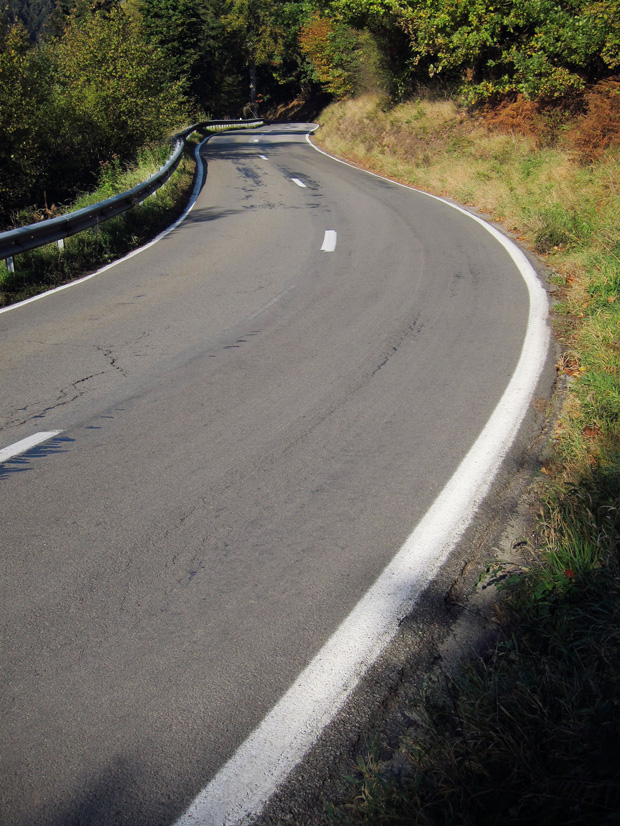 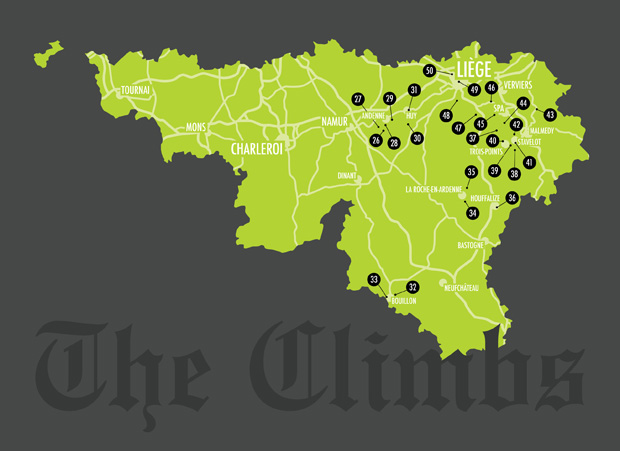 The Ardennes climbs in Wallonia are spread over a much larger area of the country but are to be found to the southeast and southwest of Liège. The winner in this group is clearly the Mur de Huy of Flèche Wallonne fame: 19% maximum gradient earns it a 10/10. Oddly enough, I found it much harder than the Col de Haussire, “the toughest climb in Belgium,” near La-Roche-en-Ardenne. 3.9 kms long, it hits 20% near the top and also earns the 10/10, whereas the fearsome Côte de Stockeu only earns a 9/10, even with its 21% maximum gradient. 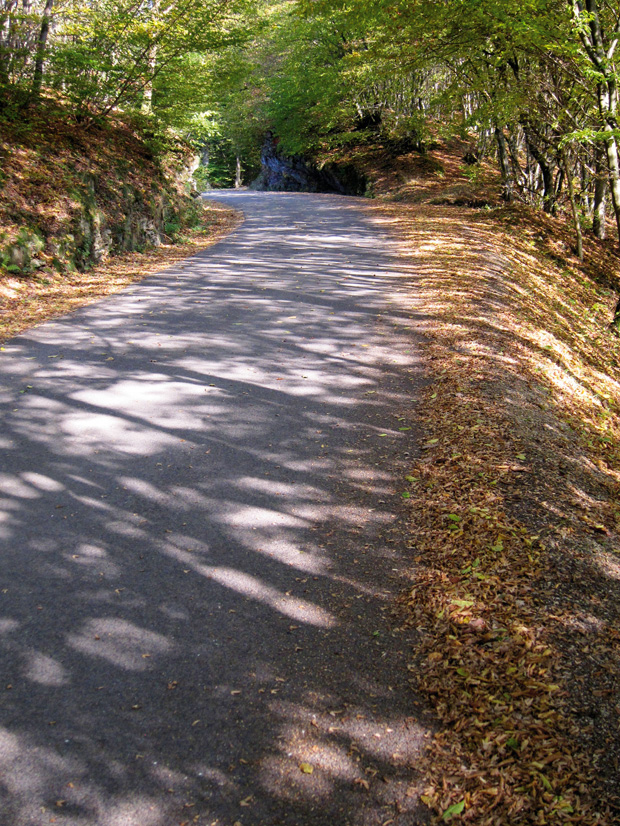 The book would fit nicely in a jersey pocket which is a good thing since among the chapters is a list allowing you to check off each of the climbs completed. Located as close to each other as they are and in a fairly small country, the hellingen could probably all be ridden within a week or so. If you have a high pain threshold. 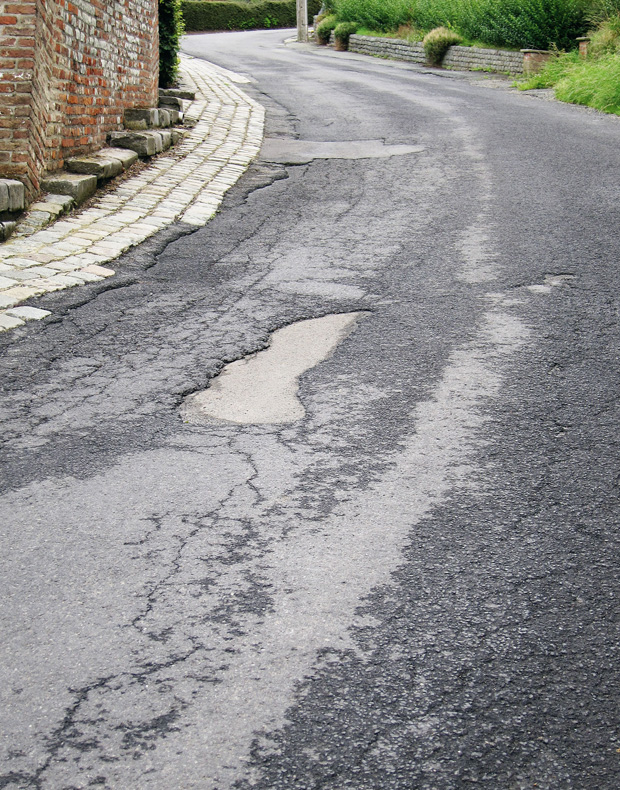 This very practical yet quite charming little book ends with acknowledgements which include the author’s liquid friends Leffe, Chimay, Duvel and Kwak, amongst others. Although I have ridden many of these climbs already, “Hellingen” makes me want to get out the maps and plan to cover the remaining ones on the list. Irresistible fun, with or without the excellent beer.

When not waking up in a cold sweat when remembering his climb up the Paterberg, Leslie Reissner may be found threading the gaps at www.tindonkey.com.
Like PEZ? Why not subscribe to our weekly newsletter to receive updates and reminders on what's cool in road cycling?