It was said that Fausto Coppi was responsible for repaving the damaged roads of post-war Italy as towns expecting the Giro d’Italia invested in repairs so that Il Campionissimo would not be embarrassed when he rolled in at the head of the peloton. His worthy rival, Gino Bartali, may have done even better as a telephone call to him from the Prime Minister of Italy during the 1948 Tour de France may have, according to legend, prevented the outbreak of revolution back home. Be that as it may, Gino Bartali clearly led a remarkable life, nicely documented in “Road to Valour” by siblings Aili and Andres McConnon.

It is curious that this book, burdened with the cumbersome subtitle “Gino Bartali: Tour de France Legend and Italy’s Secret World War Two Hero,” is the first English-language biography of this famous cyclist. His rivalry with Coppi, which divided the Italian fans and the nation into coppiani or bartaliani, was the stuff of cyclesport legend yet Coppi, who died suddenly in 1960 of malaria at only 50, has received far more literary attention outside of Italy. The two men were different in racing styles, temperament, and personal and family lives but both grew up poor and found success and fame in athletics. They became friends of other celebrities in politics, the arts and business and were received by the pope. Both of them had difficulty adjusting to life after racing. Bartali had several nicknames, including “the Little Monk” and “Pious Gino,” reflecting his staunch Catholicism, as well as “Ginettacio” (“Gino the Terrible”) indicating his tendency to speak , well, very directly. A chain smoker and a cyclist whose training was definitely old-fashioned, he was the opposite of the ascetic Coppi, who actually did live like a monk and trained using the latest scientific methods. 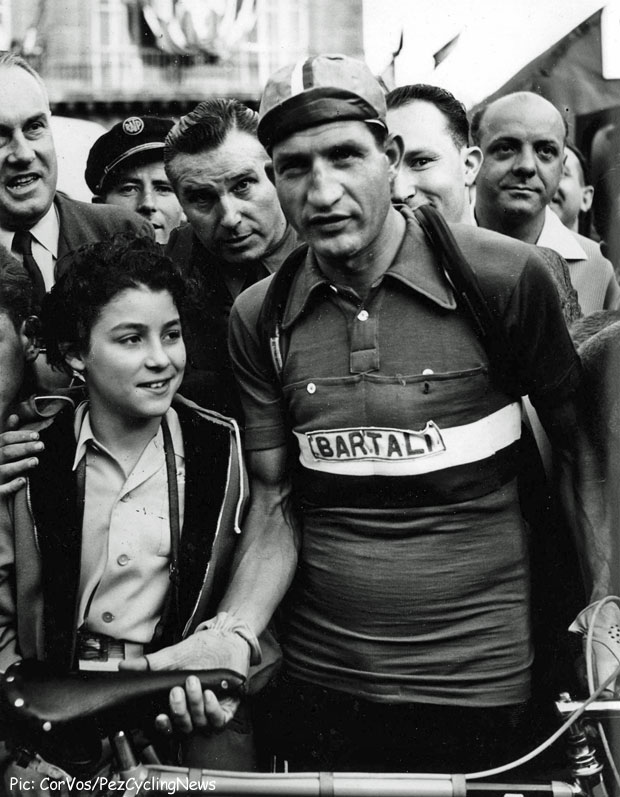 Bartali was four years older than Coppi and won two Tours de France and three Giro d’Italias compared to Coppi’s two Tours and five Giros. It has been argued that World War II cost Bartali more in terms of sporting success as he had found his maturity as an athlete when war came whereas Coppi had not yet reached his full potential. No other cyclist than Bartali has won Tours a decade apart.

“Road to Valour” opens with a fascinating account of life in Ponte a Ema, where Gino Bartali was born in July 1914. This Tuscan village lies 5 kms from the centre of sophisticated Florence but a century ago it must have seemed nearly medieval compared to the famous Medici city. Bartali was the son of a day labourer and his family lived in an apartment without running water or electricity. The main industry of the village appears to have been doing laundry for the Florentines and it was a hard life. Perhaps not as hard as Coppi’s circumstances when growing up when he may have suffered from malnutrition but difficult nonetheless.

The authors make a digression to explain the importance of cycling with a rather cursory history of bicycle development. There are occasional detours in the book which sometimes feel a bit like filler but can often be quite interesting, as in the case where post-war Italian politics are explained.

Young Bartali, who was frail but stubborn, was no scholar but his father insisted he complete the Sixth Grade, which required going to Florence for the last year of school and meant he had to earn enough money to get a bicycle to do it. It soon became apparent that the frail boy had talent as a cyclist and working part-time in a bike shop in Florence he became known. Strong parental objection prevented him from racing in spite of pleas from other cyclists, relatives, bike mechanics and the local priest. He was given permission on his 17th birthday to enter a race the next day on behalf of his younger brother Giulio. He won the race but was disqualified as the event was for 14-16 year olds but the die was cast. Within four years he turned professional.

In addition to his cycling skills, Bartali was a crafty rider who gathered intelligence on his opponents, both on the road and off. He watched for signs of weakness during races and exploited them to his benefit. He also entered the rooms of other riders to check out bathrooms and see what they might be using. Unlike Coppi, famous for his fluid riding style, Bartali was constantly moving on the bike, a style another rider thought looked “like he was being electrocuted.” An excellent climber, he had the ability to vary accelerations, making it difficult for others to find a rhythm to follow him.

Suddenly Bartali has broken through, winning a major (unnamed) race in Spain in 1935, becoming captain of his team and now wealthy enough to buy a new house for his parents. Sadly, his younger brother Giulio, who had also taken up racing and whom Gino considered the better rider, died as the result of injuries sustained in a collision with a car during a race. The 19 year old’s death devastated the family and Gino withdrew from racing but returned the following year and soon found himself in the 1937 Tour de France. 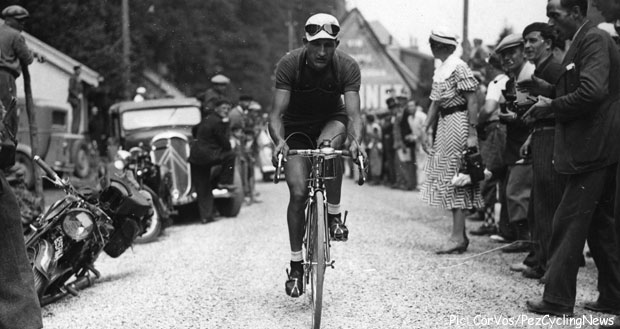 The book provides an insightful description of the importance of athletics in Mussolini’s Italy and its role in propaganda for the regime. While on the one hand this provided support for Bartali’s career he was to see a great deal of interference from political sources over the coming years. He was withdrawn from the 1937 Tour by the regime but went on to win the 1938 edition (to a very subdued official Fascist response back home) but war clouds had now gathered.

The central part of the book details Gino Bartali’s courageous actions in World War II to assist a network run by the Archbishop of Florence helping Jews, both Italian-born and foreign, escape persecution. Bartali acted as a courier, riding his bicycle from Florence to Assisi to transport forged identity papers. In addition, he arranged shelter for a Jewish family, friends from earlier days, who were to survive the war. The authors, who provide considerable detail on their research, interviewed family members of those he saved to bring this underappreciated element of Bartali’s life into the open.

Following the disastrous results of the war in Italy, Bartali returned to racing in peacetime, seeking to revive his fortunes. Now he had to contend with the on-form Coppi and results were disappointing. Written off as “Il Vecchio,” or “the Old Man,” Bartali still had enough power to command the captaincy of the primary Italian team at the 1948 Tour de France. Manager Alfredo Binda did not express much confidence in the 34 year old and Coppi refused to participate in the race at all.

The chapter dealing with the 1948 Tour de France is the dramatic highlight of the book. Things didn’t go so well for Bartali and by the Bastille Day rest day in Cannes he was more than 21 minutes down on the leader, rising French star Louison Bobet, with 1947 winner Jean Robic looking forward to the next day’s mountain stage. The same day an assassination attempt was made on the life of Italian Communist Party leader Palmiro Togliatti in Rome and Italy went into turmoil as the politician clung to life. That evening, Prime Minister Alcide De Gasperi telephoned Gino Bartali, asking him to try to win the Tour as it would be important for Italy in light of the domestic tension there.

The call had been completely unexpected but in the best tradition of Hollywood films Bartali went on to destroy his competitors in the next two stages of the Tour. In the end he arrived at the finish in Paris with 26 minutes advantage over the next competitor. It was a huge triumph. Italy was overjoyed. Togliatti recovered, reputedly asking when he regained consciousness how Bartali had fared at the Tour.

Bartali was to race for a few more years but with no more dramatic successes. His timing was unfortunate; three years after his Tour victory prize money for the winner had tripled. Finally retiring from racing in 1955, he embarked on a series of business ventures to cash in on his celebrity but did not enjoy any success. He became the Grouchy Old Man of Italian Cycling as a radio sports commentator, eager to point out the perceived mistakes of his successors in the peloton, and passed away in May 2000, aged 85.

The authors of “Road to Valour” have done good work in bringing Bartali’s life and times to a wider audience. With the exception of the 1948 Tour de France his races are not described in any detail, which may be a disappointment to cycling fans and it would have been nice to have more photographs, but the greater story is fascinating. In addition to using sources such as Bartali’s three (!) Italian autobiographies and other written sources, the authors conducted interviews with Bartali family members, including the cyclist’s 91 year old widow, the Jewish family he rescued and, amazingly, the would-be assassin of Palmiro Togliatti. With the next Giro d’Italia upon us shortly “Road to Valour” would be a timely recommendation for anyone interested in the role of one particular Italian cyclist in the greater panorama of history. 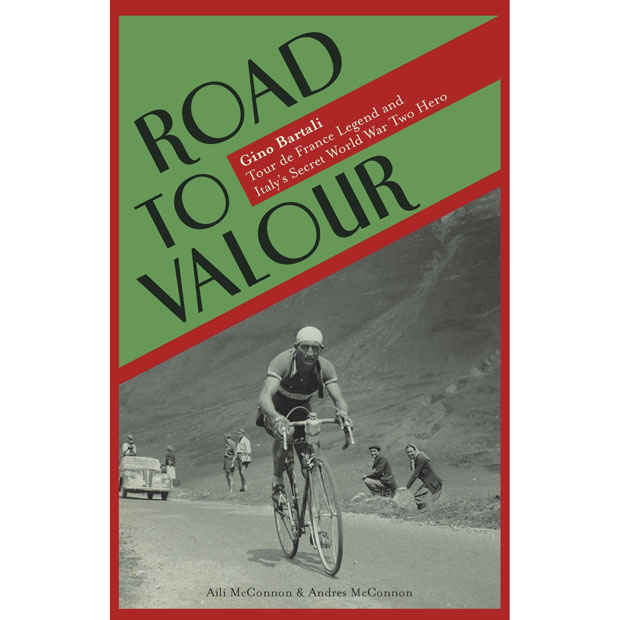 When not hoping to return to Florence and find the Gino Bartali Museum in Ponte a Ema actually open this time, Leslie Reissner may be found considering gelato’s importance in training at www.tindonkey.com
Like PEZ? Why not subscribe to our weekly newsletter to receive updates and reminders on what's cool in road cycling?