100: that’s a big number. Frenchman Robert Marchand was 100 years old when he set a new age group category record by cycling 100 kms in 4:17, soon after setting the One Hour Record for the same 100+ age group (of which he currently seems to be the only member) to crown his birthday activities. Well done, Robert! And to mark another 100th in France, VeloPress has produced an elegant photobook to celebrate the first 99 editions of cycling’s greatest event, the Tour de France from 1903 to 2012. 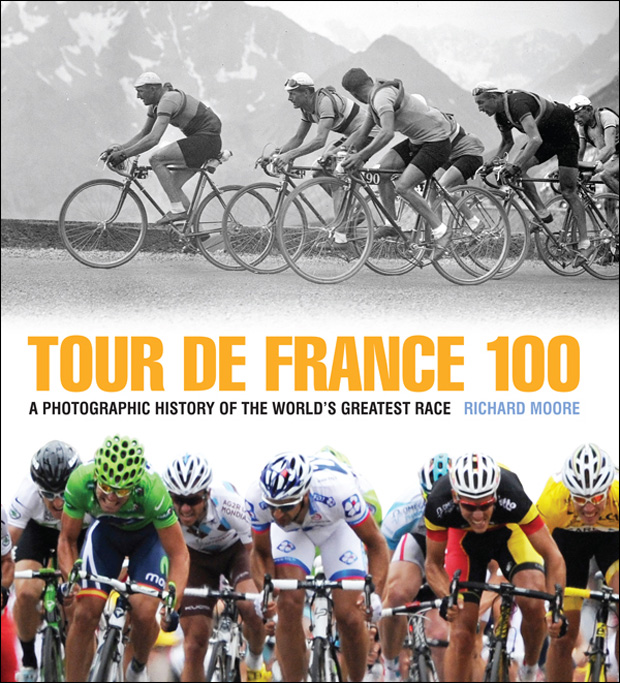 Author Richard Moore, in “Tour de France 100,” begins at the beginning, seeking out the Cafe Zimmer where early in the last century on a November evening in Montmartre the Tour de France was first proposed by staff of the struggling L’Auto newspaper. From that small group discussion emerged a race that has, befitting its origins as a commercial vehicle, received exhaustive press coverage from the start, that has adjusted itself over the decades to meet the varying demands of print, radio, film, television and the Internet.

The race has outlived the Cafe Zimmer (although it still exists as the Indiana Cafe) and grown into a global enterprise. Its strengths include the glorious stage of the entire nation of France (with a few foreign excursions), a cast of great athletes with larger-than-life eccentricities or tragic tales and titanic clashes to overcome geography, weather and rivals. The rules have been constantly adjusted as the organizers sought out ways to heighten the tension, broaden the challenge or, apparently, kill the riders. 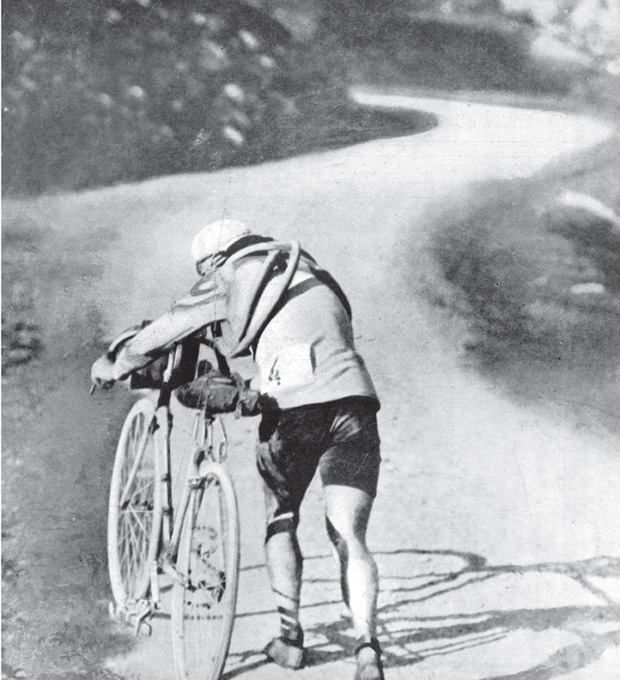 We brought far too many people to Paris, and there was not enough wastage…Out of 110 starters, 41 riders finished the race. I repeat this is far too many.

Lapize was to win a single Tour and was one of three champions to die in World War One.

The Tour has had its constant themes but there have been so many rule changes, seemingly at Desgrange’s whim from time to time, it gets confusing to follow how the race was judged in the past. “Tour de France 100” is helpful in dividing the race into eras and offering explanations of exactly what was happening. The early days were never much about fair play or sporting nobility. The first winner, Maurice Garin, was stripped of his second title for cheating and the first double winner became Lucien Petit-Breton (1907 and 1908). An atmospheric photo shows Petit-Breton (who also died in the Great War) looking filthy and haggard on his heavy team Peugeot bicycle, held up by an immaculately-dressed white-clad gentleman (an official, perhaps or his trainer?). And moustaches all around. 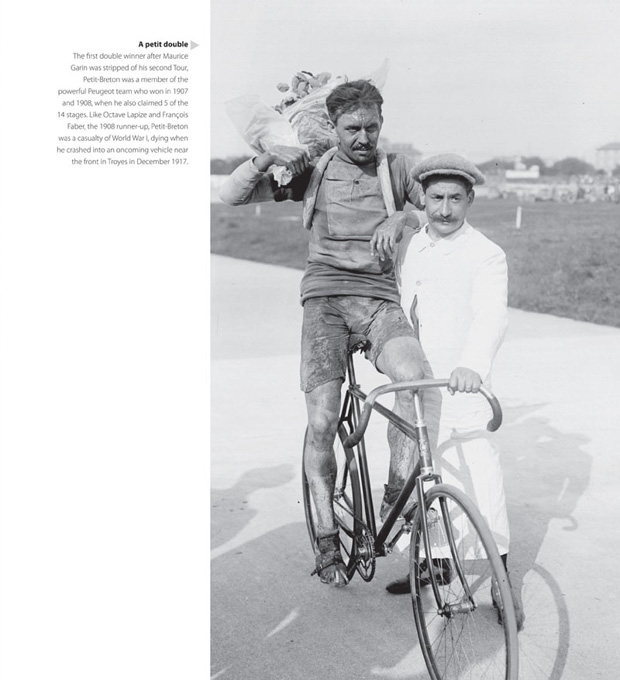 The race continues after a break for World War One as the riders regroup in the shattered countryside. Another legend is born with the Unluckiest Man in the Tour (well, aside from those who actually got killed) as Eugene Christoph breaks a fork in the 1913 edition, drags his bike to a village blacksmith and hammers it back together at the forge, receiving a time penalty because a boy operated the bellows to keep the flames up for him. Christoph was the first to wear the Yellow Jersey in 1919, broke his fork again that year, probably costing him overall victory, and, yes, again in 1922 descending the Col du Galibier. He found yet another blacksmith’s shop and did his repairs, noting in later years: “That accident didn’t upset me as much as the others. By then I was a bit of an expert.”

The photos are wonderful, showing the bikes built more for strength than anything, their riders more like muddy desperadoes than Olympic sporting heroes. In 1924 there was a protest when Desgrange enforced another one of his flippant rules, this one requiring cyclists to finish with the same clothing as they began, meaning you could not shed any layers after a descent. The Péllisier brothers had enough and withdrew and a third rider joined them in a bar where a journalist wrote down their thoughts, eventually turning them into a book “The Convicts of the Road,” emphasizing the suffering cyclists had to endure. Henri Péllisier described the race as “a Calvary,” and his brother Francis produced a box of pills, saying “We run on dynamite.” Anger, suffering, controversy, doping: more fuel for the Tour publicity machine! 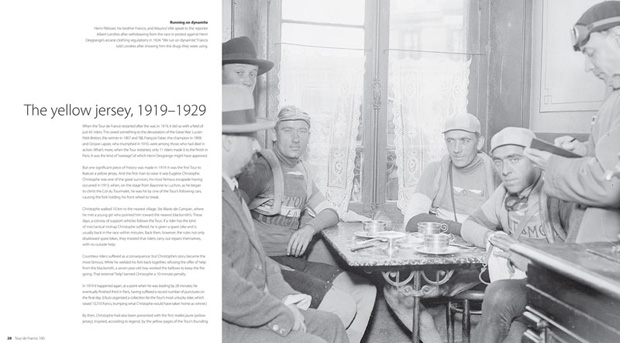 Henri Péllisier, who was prone to violence himself, ended up being fatally shot with five bullets in 1935. The rider who went on to win the year the brothers dropped out was Ottavio Bottechia, the first Italian winner who took the victory in 1925 as well as 1924 but died in mysterious circumstances on a training ride two years later.

The rules changes are not always clear as Desgrange and his men tried to find ways to make the race more exciting. Freewheels were not allowed for a number of years and variable gearing was not permitted before 1937, when cycle tourists had already been using it for at least a decade. Trade teams were dropped in favour of national teams (and sub-national ones) and Desgrange was appalled by the idea of support riders, belittling Maurice Brocco who helped François Faber to victory in 1911 as merely a servant, or domestique. The noble domestique, giving up his own chances for his team leader, became part of the Tour legend. It made Desgrange so angry that one year he basically turned the Tour into a series of time trial stages. The book offers a fine photo of Lucien Buysse leading Bottechia through Saint-Cloud in 1925 on the final stage that year. This faithful helper won the Tour himself the following year. 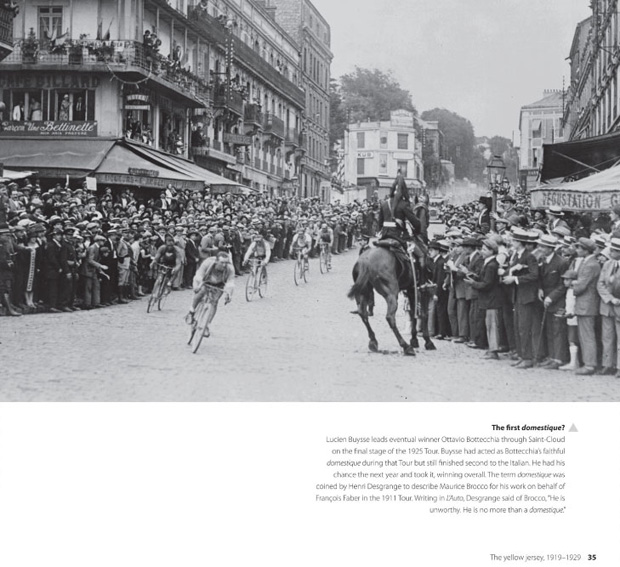 By the 1930s the reach of mass media broadened interest in the tour and that decade saw management passing from Desgrange, who retired in 1936 due to ill health and was replaced by Jacques Goddet, who was to run the race for the next half-century, immediately dropping the rule against multiple gears and opening up the opportunity for some technical advances in equipment. Roads were actually paved on some of the mountain passes, replacing the previous goat tracks, but the beginning of Goddet’s reign did not make the challenges less, as a fine image from the 1937 race shows, picturing the peloton lined up at speed on the cobbles stones of Vannes in the cycling heartland of Brittany. 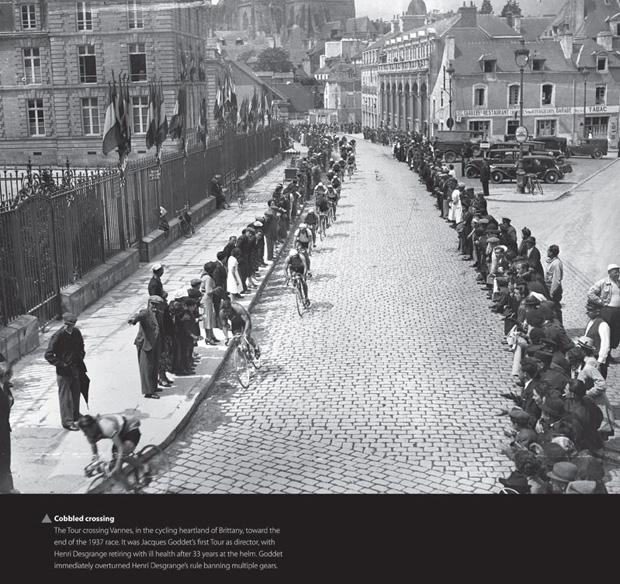 My own favourite era of the Tour begins after the Second World War, with black-and-white photos, superb in their details, highlighting the adventures of famous riders including Koblet, Bartali, Copp and Bobet, leading us eventually to the Five Time Winners. Anquetil and Merckx still belong to this period, seemingly so far in the past. 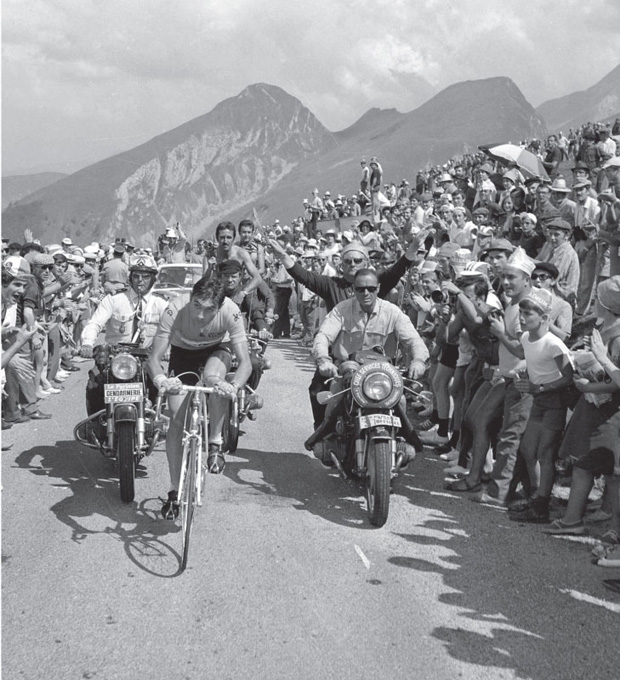 The era of colour photography begins and it is a bit jarring to see Anquetil, Merckx and Hinault together in 1987 in bright yellow jerseys, two retired riders and the still-aggressive “Badger” in the modern world. One likes to think that those jersey are still wool as clothing moved then into half-developed polyesters and some of the most tasteless designs ever. 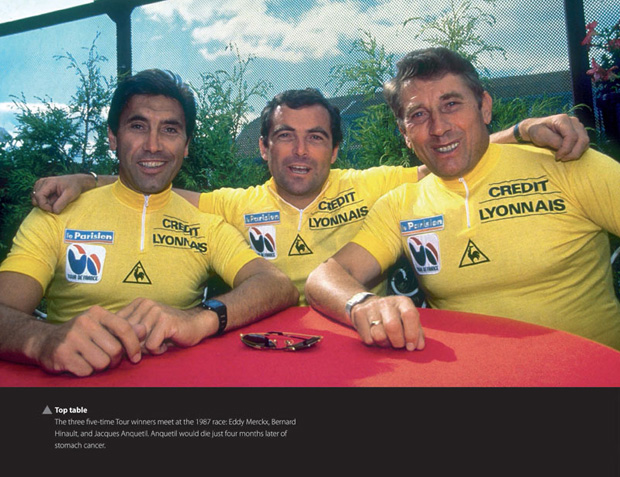 The great joy in a comprehensive visual history of the Tour de France lies in the unfamiliar photos and here the old images bring the most pleasure as once we pass the time of blurry colour to today’s super-sharp photos there is a sense no longer of wandering in a foreign land. This is not to say the photos are not excellent. High-speed cameras have frozen Ullrich attacking or Armstrong crashing better than anything in the old days but these seem familar and workaday to us. 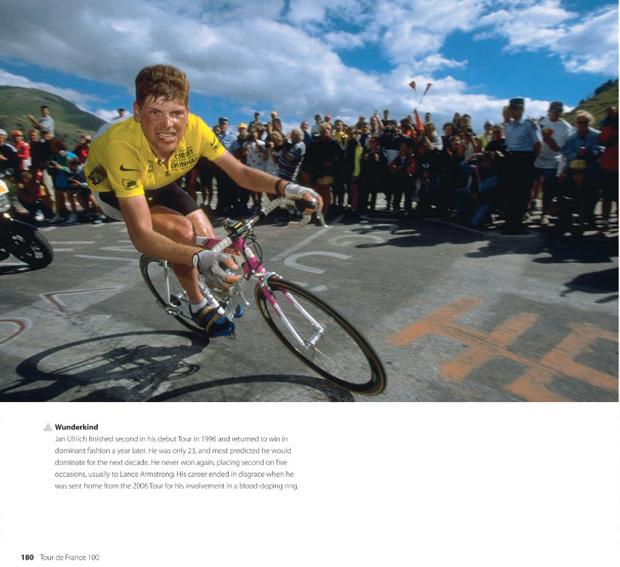 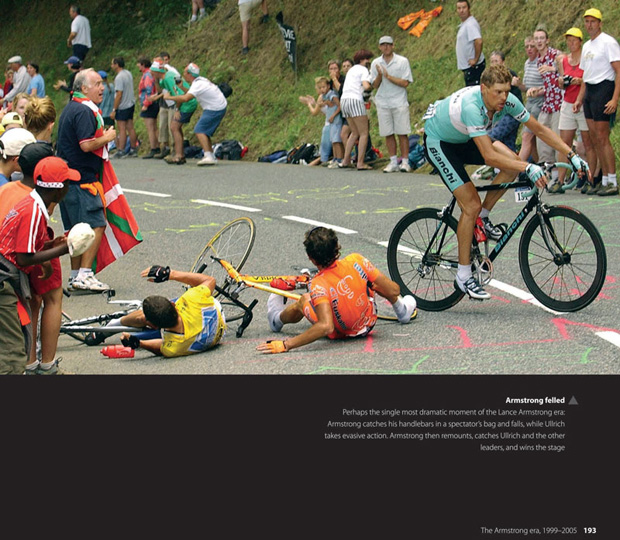 The book concludes with the 2012 win of Bradley Wiggins, continuing the trend of victories by non-French riders and preparing the stage for Chris Froome’s domination in 2013 at the 100th running of the race. And the race will probably remain the only sporting event with 100 races completed and only 93 winners but we don’t need to rehash this. 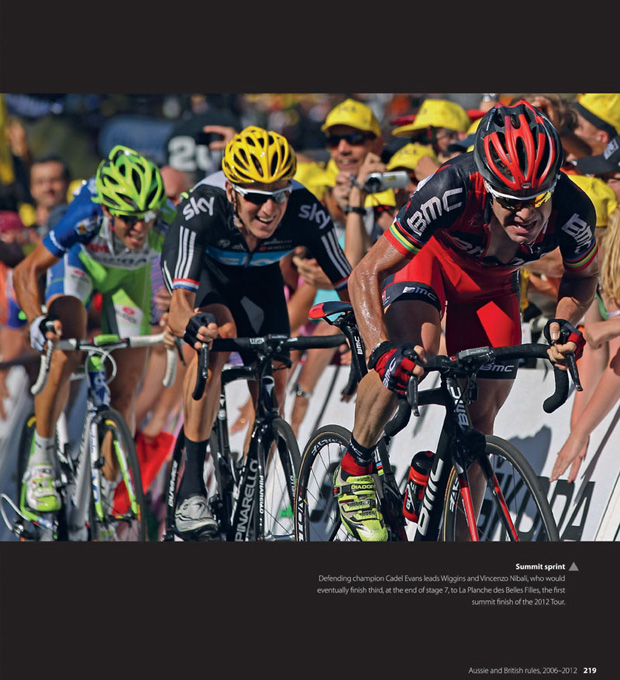 The magic of “Tour de France 100,” which does feature excellent written commentary by Richard Moore, seems to be more in the distant haze of yesterday. Yes, there was plenty not to be nostalgic about and the reader can pick and choose his or her own view of the Tour de France and what it means. But the race’s history is well-served by this finely-produced book with far too many excellent photos to describe. It should find a respected place among the many tomes dedicated to the ne plus ultra of bike races.

The Tour de France will surely go on to many more editions. And back in France on January 31 this year, Robert Marchand proved that 100 is only the start of things. Clearly having upped his training program in the last two years, Monsieur Marchand smashed his own One Hour Record in the 100+ age group.

When not mapping out routes of bygone Tours de France to ride in summer, Leslie Reissner may be found wearing scratchy polyester retrojerseys at www.tindonkey.com