Interview: Adam Hansen is one of the most reliable & strongest domestiques in the World Tour, a valued helper for André Greipel and previously one of Mark Cavendish’s main men but he’s also a lot more. He’s a Grand Tour stage winner, a businessman, an inventor and a nice guy to boot. We caught up with him for a chat just days before he starts his 8th straight GrandTour.

Adam Hansen is a hard man to keep up with; the 32 year-old from Queensland keeps reinventing himself. There was Hansen the double Crocodile Trophy MTB winner; the Aussie Time Trial Champion; the key member of the High Road/Columbia/HTC Cavendish Express; then the same role for Andre Greipel at Lotto; the man who eats Grand Tours for breakfast; the Grand Tour stage winner in spectacular style – and Hansen the innovator, we’ve all seen those shoes . . . 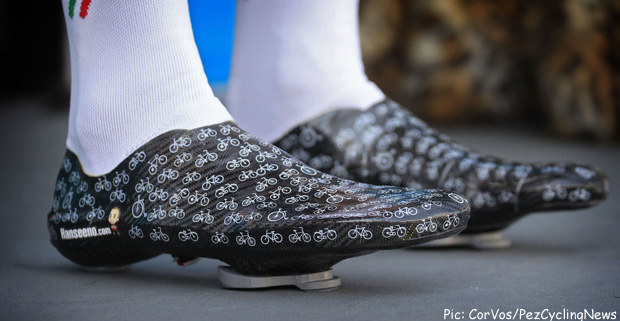 It was 2003 when the former triathlete signed for his first of four Austrian teams Arbo-Merida, moving to Corratec for 2004, Elk Haus in 2005 and Aposport in 2006. During those four seasons there was a string of wins and strong performances in Austria as well as two victories in the Crocodile Trophy epic MTB race back in Australia in 2004 and 2005 – not to mention silver in the Australian Elite Road Race Championship in 2006.

For season 2007 he stepped up two rungs on the ladder’ missing out Pro Continental and going straight in at the top with the T-Mobile team. He started his first Grand Tours that year, the Giro but it was the Vuelta before he could chalk up his first finish in one of the ‘Big Three.’

From 2008 to 2010 he rode for the various incarnations of High Road/Columbia/HTC and was a key man in Cav’s unstoppable train. If you’ve ever read Cavendish’s ‘Boy Racer’ book you’ll be aware that the Manxman has high regard for Hansen.

Along the way Hansen found time to claim the Australian Elite Time Trial Title, win bronze and silver in the Road Race Championships plus a stage and the GC in the Ster Elektrotoer. 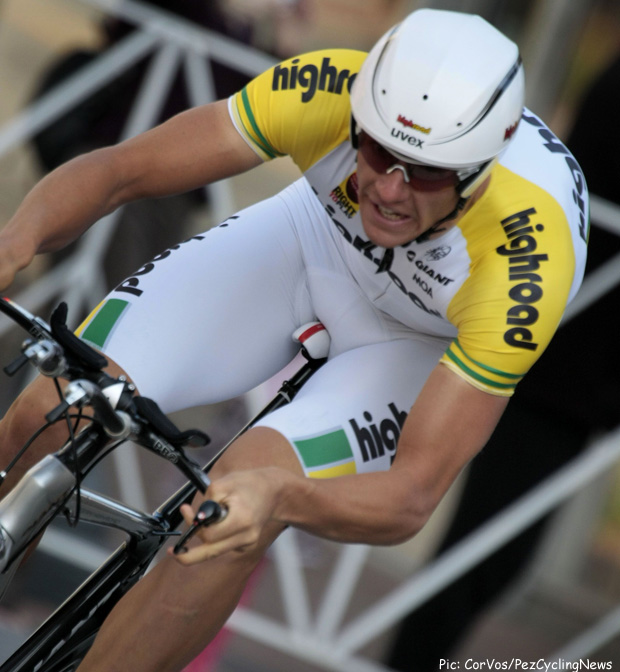 He’s been with Lotto since 2011 and you’d have to go back to the Tour de France of that year to find a Grand Tour in which Adam Hansen did not participate. He rode all three in 2012 and 2013 with the icing on the cake being a magnificent solo stage win in the rain on Stage 7 of last year’s race.

Then of course, there are the famous shoes, Hansen now markets these – along with other goodies on his Hanseeno.com website, which tells us;

‘These shoes have been under development for years- more than half a decade. But it was not until 2013 when they became race ready. They are the lightest shoes in the Pro Peloton by more than 50%. The price reflects the 42 hours plus that go into making a single pair and the eight moulds which are required. They are not cheap by any means but you do get a shoe under 95 grams, hence the name U95.’

Virtually a carbon ‘sock’ with super stiff sole to take the cleat they were originally developed for Hansen for his personal use to suit his bony feet but are now available to the public. 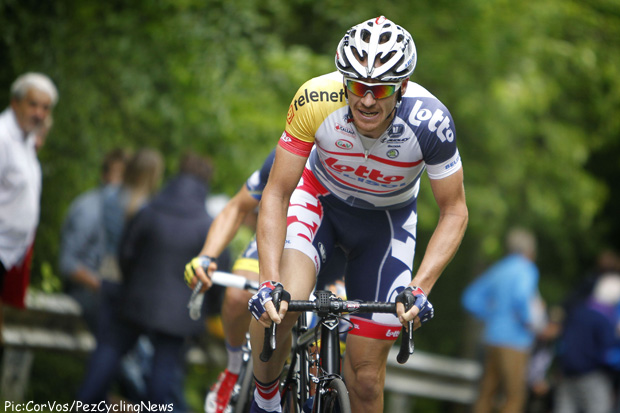 We spoke to the Aussie who’s made his home in the Czech Republic as he rode the airport bus for the flight to Istanbul this past Saturday to take on the last stage of the Tour of Turkey.

PEZ: Tell us a little about the Tour of Turkey please, Adam.
It’s a very well organised race, the sponsors work hard to make everything easy for you logistically. Turkish Airlines have been great and so has the Turkish Government and Tourist Board, they want to show their country in the best light to rest of the world. (Adam himself put in a great ride in Turkey finishing in 9th overall)

PEZ: How’s Andre Greipel doing?
It’s his first race back since that bad crash in Ghent-Wevelgem – he has to build the muscle and tendons around his shoulder back up after his collar bone break. He’s having fun, helping the team, going in the breaks and enjoying the race as he builds himself back up.

PEZ: I see Viviani has been getting the better of Cav . . .
Yeah, but that’s good for the race and the spectators, it makes it a much more interesting race if you don’t have just one guy dominating the sprints. And the thing with Viviani is that he doesn’t have the same train that Cav does, so ‘chapeau!’ to Elia.

PEZ: What’s the plan between Istanbul and the last stage in Turkey and Belfast and the first stage of the Giro?
Turkey finishes tomorrow, Sunday then we fly back to Belgium on Monday and spend one night there before we fly to Ireland. We’re there early but remember that the race starts with the team time trial on Friday. I’ll be looking to spend those days recovering from my efforts in Turkey and getting ready for the TTT.

It’s been difficult explaining to people that I’m going to Ireland to ride in the Tour of Italy! There’s a lot involved logistically and it makes things harder – but we get an extra rest day so you won’t hear me complaining. And anyway, long transfers are always a fact of life at the Giro; it happens every year – although this is a long one, from one side of Europe to the other.

PEZ: You were in good condition early for this season – ninth in the Tour Down Under and King of the Mountains.
The Tour Down Under is my home race, my friends are all there so I feel I have to perform. I had a fourth and a ninth on stages, ninth on GC and won the K o M, but the good thing was that then I had four-and-a-half weeks after it to rest and prepare for Tirreno and Milan-Sanremo.

I felt good in Tirreno and took fourth on a mountain stage; then we rode a good Milan-Sanremo – we still had four on the Poggio. Then I had another break until Turkey and the Giro; I’ll take a break after that and then it’ll be time for the Tour . . .

My programme is good, I race a lot – 98 days in 2013 – but I get plenty of recovery time between races and it works well for me. 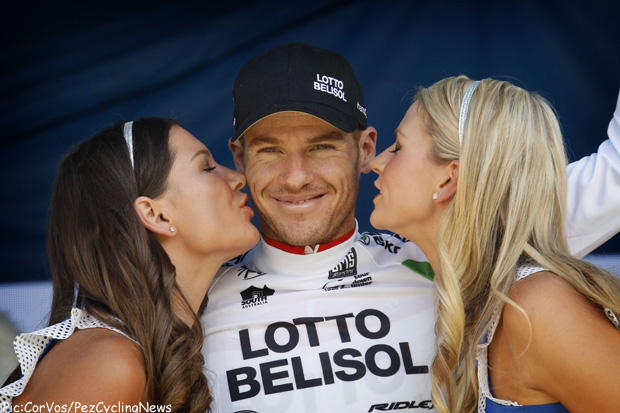 PEZ: But it wasn’t the best Classics campaign for Lotto?
We had Kenny Dehaes win in Drenthe and Nokere but every one of those spring races in the north is like a world championship – and the pressure is on us because we’re one of the big Belgian squads. But we had illness and injury and that leads you to shoot yourself in the foot – you have to pull in guys who should be resting and they end up over raced and tired and/or sick. It was a sad period for us – and now the pressure is on us to perform at the Giro.

PEZ: Has becoming a Grand Tour stage winner changed things for you?
Oh yeah; it gives you confidence; so much of cycling is in the head. And now the team expects more of me which gives me more opportunities.

If I’m in a race where I have to play a team role for Andre then that’s fine but in other races I have more freedom and it expands the goals I can set for myself. 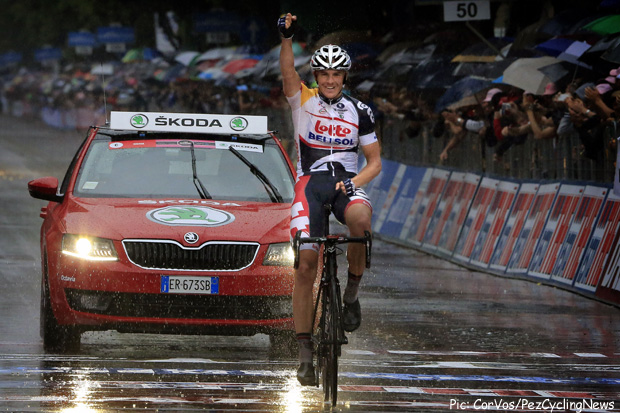 Adam taking his superb solo victory in the 2013 Giro

PEZ: What are Lotto’s goals for the Giro?
Maxime Montfort is our man for the GC; he’s been sixth in the Vuelta in the past and was 14th in the Tour de France, last year so top ten is well possible. He’s our main hope but Lars Bak has won a Giro stage before and so have I.

We also have Tim Wellens, he’s young but rode very strongly in the Ardennes races – he could spring a surprise. I think we’ve come out of the Giro with a stage win for each of the last five years and we don’t want that to change. 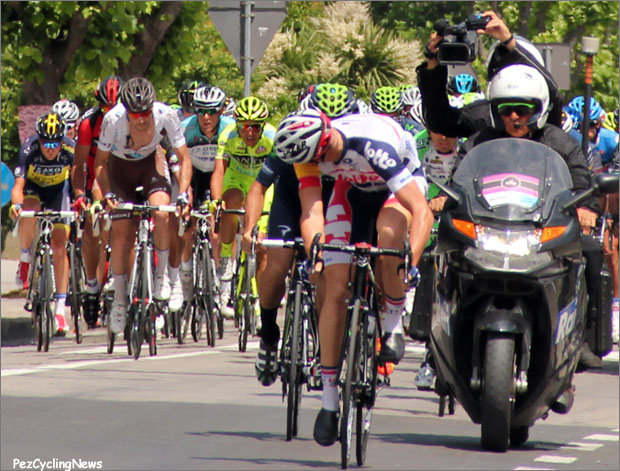 Adam lights up the proceedings at the 2013 Giro stage 7 right after the flag dropped – and went on to win the day.

PEZ: Have you been studying the parcours for ‘breakaway day’ opportunities?
No, I never do that – all I’m concentrating on is fine tuning my form and coming out of Turkey in the best possible shape for the Giro. And besides the information on line isn’t detailed enough, I like to wait until I have the race handbook so I can really study the stages.

But you also have to wait until the race takes shape to be able to gauge your best opportunities – you need the situation to be right for you before you can go on the offensive.

PEZ: How are the famous ‘carbon slippers’ doing?
My Hanseeno.com website actually goes live tonight, so the full range of products, including the shoes, will be available on line – up until now you could only get them in the Czech Republic.

‘Hanseeno’ is a nickname I got from a teammate while riding for Team HighRoad. I can’t remember who it was – maybe Mark Renshaw or George Hincapie – but I liked it and eventually made it the name of my clothing brand. We sponsor the team, so as well as the shoes you can get T-shirts, hats, neck warmers . .

PEZ: Tell us about the narrow handlebars.
They’re more aero! I’m trying to become as efficient as possible, use less energy all the time. 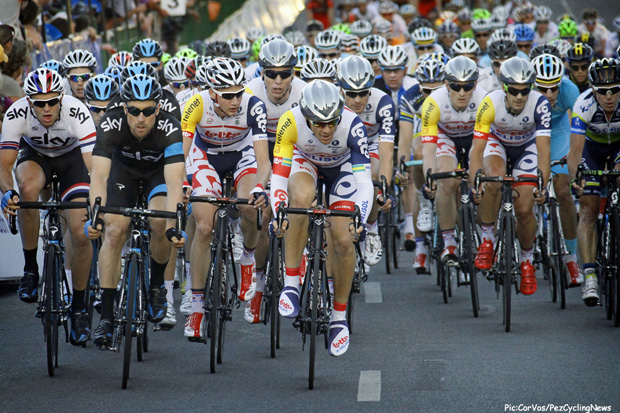 PEZ: And is it all three Grand Tours, again in 2014?
For sure, I love it! I have the Tour Down Under, then a break, then Tirreno and a break, the Giro and a break before the Tour and then another break and it’s Vuelta time and finally Beijing. It’s a lot of racing but also a lot of time at home and a lot less travel time – it suits me perfectly.

Who’s going to win the Giro, Adam?
I honestly don’t know – but personally I’d like a dark horse to win, an outsider; like Thomas De Gendt making the podium in 2012.

# We’ll be catching up with Adam again as the Giro rolls on and wish him well for his eighth Grand Tour on the trot. #

The “Gimondi” is back in great style