Diego Ulissi is one of the most talked about riders of the last 6 months after finishing 2013 with numerous wins he’s now started 2014 with wins Down Under and back home in Italy. We recently caught up with Diego to talk about his season so far as he prepared for Tirreno-Adriatco.

The last time I spoke to Diego it was Chrismas Eve but a lot has happened since then and I ain’t just talking about Santa. His performance in the Tour Down Under has made him stand out as one of the riders to watch in 2014. He finished 2013 by winning Milano-Torino, Coppa Sabatini and Giro dell’Emilia, and started 2014 by winning a stage and finishing 3rd in the Tour Down Under.

He is destined for greatness and has a brilliant chance of winning a Classic in 2014. He rides for Lampre-Merida, and they love him! Here is my catch-up with Diego: 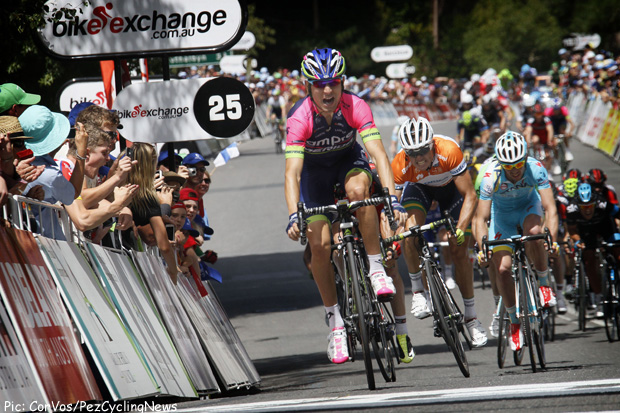 Diego taking a great stage win Down Under in January

What a great start to the season! When you started training in Australia did you realise that you were in great condition?
No I did not expect to go so strong. I wanted to make a good start but never thought I could win.

Stage 1 was meant to be a day for the sprinters but Gerrans beat Greipel and you finished 4th. What did you think about the stage?
The first day was to be a sprinter’s arrival, but the last few miles were constantly on the rise and I had a good finish.

On stage 2 you took a brilliant win, beating Gerrans into Stirling. You seemed to time your sprint perfectly, what was your plan in the final kilometre?
Those who had already raced the stage in previous years had told me to start the sprint from behind. So I did, and then my power sprint did the rest!

After winning the stage, did you start to think about the GC?
Surely after the victory I aimed to make a good ranking.

Evans stormed away on Corkscrew Hill on stage 3, and you finished 3rd. Were you impressed by Evans?
Evans won the stage on the hill, and he went very fast. No one was able to keep pace, so I defended and took a good podium.

Stage 5 was an incredible day, with the 2 climbs of Willunga Hill. Porte attacked at the bottom of the climb and Evans went after him. At this point were you worried?
In stage 5, Porte was very strong and attacked. I did not go with him, I went back to my choice. I preferred to go up at my pace and then adjust in the finale. I was feeling good. 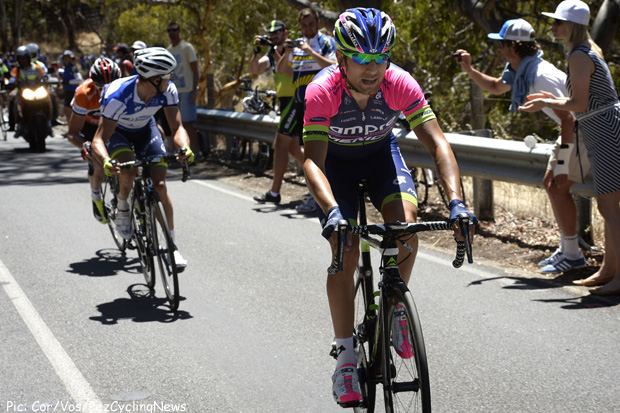 Putting the pressure on up Willunga

The wind seemed very strong on the climb, how hard was it?
There was a lot of wind, thankfully it helped me stay close to the others.

Can you remember ever starting a season as strong as this?
This is the strongest start I’ve ever had.

Your team worked very well in Australia. How grateful are you to work with a great team?
In Australia we all went very strong and they worked really well. 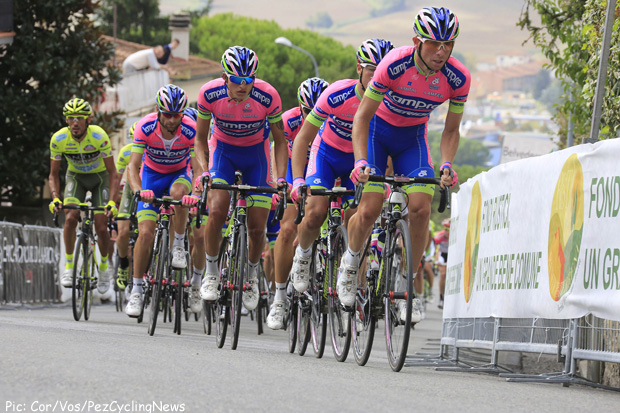 Diego’s team working for him in last year’s Coppa Sabatini – a race that Diego would go on to win.

Is this a race you would like to return to?
Surely the next few years I will be back to do well even if it means I stay away from my wife and my daughter. It’s really hard when we are away, but we have Skype!

You returned to racing in Europe in Mallorca. What type of training were you doing before then?
Once back from Australia I took a little breath. The races, in Mallorca, I treated as training.

In Mallorca you raced with the new Lampre-Merida signing, Chris Horner. What can he bring to the team?
Horner can really bring a lot of experience and competitiveness in the grand tours.

How impressed were you with the sprinting of new signing Sacha Modolo, 4 wins already in 2014?
He is going strong and I’m happy for his victories. He’s a great sprinter.

You live in Lugano and will be riding GP Lugano on 2nd March. You were 16th back in 2012 and 33rd in 2010. I take it you now these roads well? Is this a race you would like to win, in front of your family?
Lugano is a great race and I really want to do well! 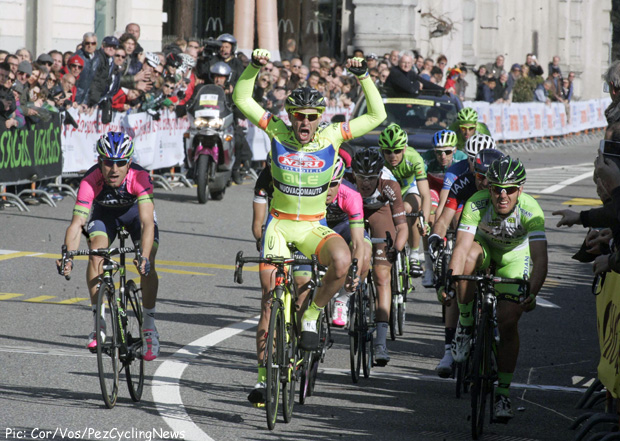 Diego did well in Lugano but just came up short of the victory, finishing 3rd

In our last interview you told me that Tirreno was a big target. In March you have GP Lugano, GP Camaiore, Tirreno and Milan-San Remo. How will you prepare for these races?
Surely the month of March and April are the months with many beautiful events. I am preparing very well with specific training and back with intensity for Tirreno and the classics. I want to do very well. 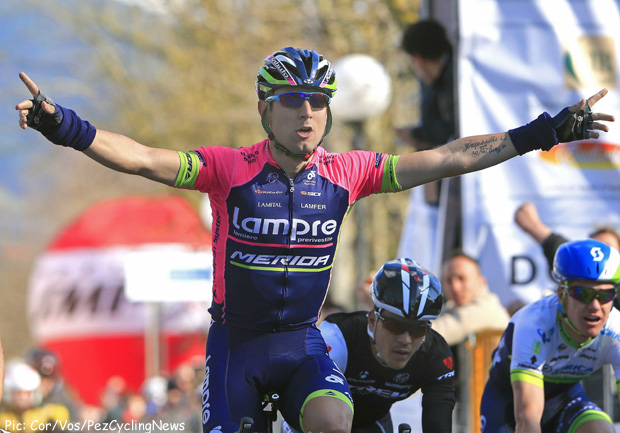 Diego took the win at Camaiore and is now racing in Tirreno Adriatco, full of confidence.

As an athlete, how difficult is it to maintain form throughout the season? We often here riders talking about peaking twice or three times in a season, but we also have riders, like Froome, that stay strong for long periods.
An athlete can have three peaks of form during the season. They must be good to manage themselves well, with training and recovery at home.

Are you part of the training camp organised by new Italian coach, Cassani? I see he has been to Spain and has already done the route! The more I look at the route, the more I think of you!
I am happy to make the first meeting with Cassani, so he can know us better, and definitely will talk about the Worlds as I like it too!