PEZ-DTour: Inside The Volksbank Car

Go on, admit it. You’ve watched the races on TV and have always thought, ‘Wow, that would be really cool to follow the riders in a team car”. Well, that’s exactly what PEZ did during Stage 7 of the Tour of Germany.

Hanging out at the startline, always looking for a good interview or story, I ran into soon to be featured on PEZ, Pascal Hungerbuhler of Team Volksbank. The Swiss strongman and genuinely all round nice guy immediately invited me to spend the afternoon with him and see how he prepared for this important time trial. I thought that could be a good story – but then he made it better, “how about you follow me in the team car too?” Never one to turn down a good offer, I jumped at the chance and this is how the day went. 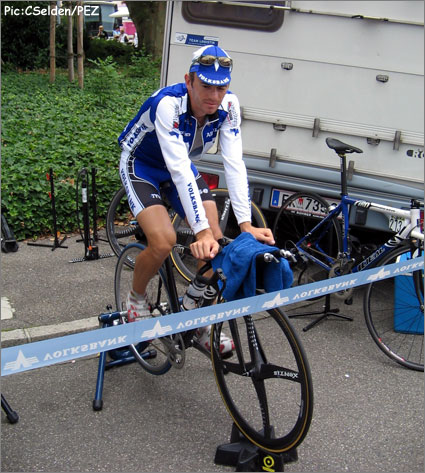 This Deutschland-Tour was Pascal’s first ever Pro Tour race (and for that matter his team’s first ever Pro Tour race), and I was expecting Pascal to be nervous and a bit on edge before the race – but that definitely wasn’t the case. Mr Cool himself, Pascal casually sipped a coffee and signed autographs for the fans as the mechanic put his bike onto the trainer for his warm up, around 45 minutes before his start time. Reluctantly Pascal jumped aboard for his warmup, all the while complaining to me, ‘aagggh, I hate warming up’. He is a true racer, not much interested in the ‘process’ of things – he just likes to race.

During warm ups, many riders have specific routines they follow, certain drinks to be drunk at certain times or they must warm up whilst listening to their Ipods pumping out their favourite tunes etc. Not Pascal though, he just jumped on the trainer and got straight into a good rythmn all the while laughing and joking with his team mates and answering questions from a pesky journalist (me). 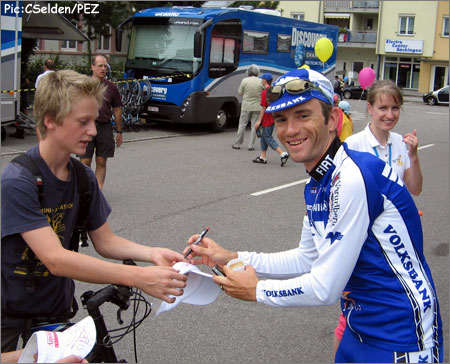 Things got serious though with about 10 minutes to go as Assistant director Lukas Zumsteg, himself a former Phonak pro, ran Pascal through the difficult bits of the course to watch for and how he should ride them. I could have saved him the trouble by telling him to read my TT preview article on PEZ but I thought I wouldn’t interrupt…….

Rider/Director talk over now, it was time to head off to the startline as Lucas, myself and a Tour of Germany official headed off to the team car, whilst Pascal slowly rolled down to the start house. As we jumped in the car we had a quick discussion on languages and what we would speak in the car… unfortunately my vote for English or French didn’t go down too well in this Austrian team, so German it was. Oh well, not too much to understand in a time trial is there?? 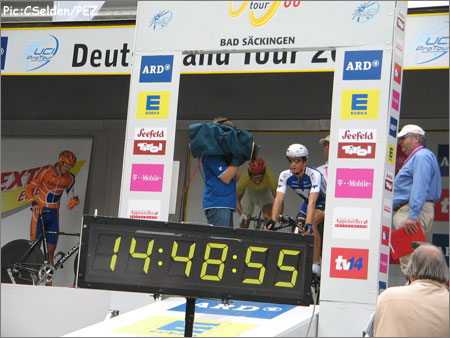 Let’s get this party started.

Achtung Boys – It’s Start Time!
Waiting below the start ramp and looking up at Pascal as he awaited the countdown with the TV cameras on him, the tension and the nerves started to show in his face for the first time. The large crowd were clapping and cheering as he left the start house and we were away. I didn’t know what the German word for ‘hold on’ was before I left the start house, but I do now as I was thrown across the back of the car into Pascal’s spare bike after the first corner.

Then I remembered that following a bike race also involves a car race going on behind the riders! Generally the team’s directeurs sportif are excellent drivers and have the amazing ability to do 5 things at once and still drive the car. Lucas’ favourite skill was taking his hands off the wheel, leaning out the window to take photos and all the while discussing Pascal’s performance with his passengers. 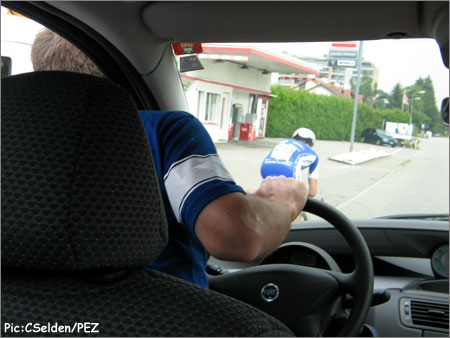 Another skill was using the Volksbank’s team radio to their rider… ok, so I lied, there was no radio. Communication was via the ‘classic’ method (ie: old fashioned) – drive up really close to the rider’s back wheel, hang out the side and start yelling. 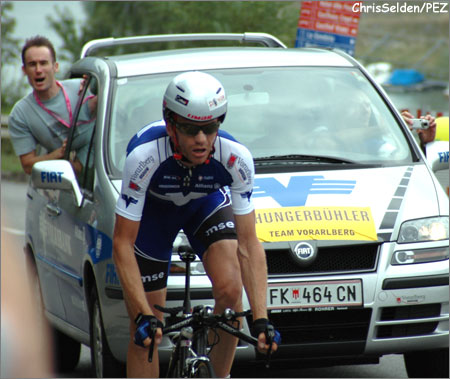 Pez-man Chris Selden gets into the spirit doing his best impersonation of a dog inside a car chasing a bike rider.

‘Super’ and ‘Going well’ seemed to be the popular phrases and I even joined in on the odd occasion totally getting into the spirit of things. Although I was the only one yelling in English….. 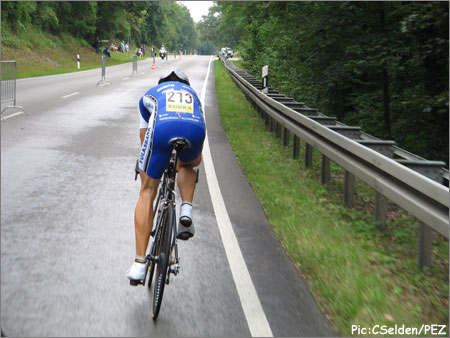 Midway in and going well.

Step On It
Some say that time trials aren’t all that interesting to watch, but seeing them from the team car gives you a totally different perspective and Pascal kept it interesting by riding a really good race. Stage 1’s winner, Assan Bazayev (Astana) was Pascal’s minute man and at the halfway mark Pascal had almost caught him. Seeing Bazayev definitely encouraged Pascal to drive on harder but Bazayev slipped it up a gear as he clearly didn’t want to get caught which led to both riders increasing their pace. 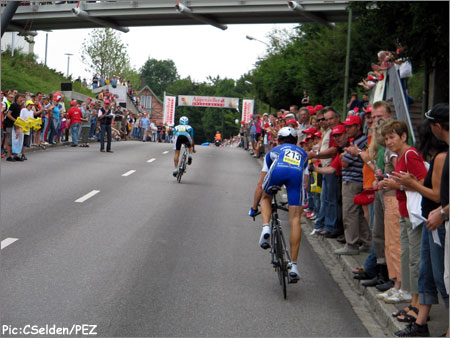 The carrot about to be eaten.

Pascal eventually caught him at the top of the only climb on the circuit – right in front of the largest crowds. The people were going wild and yelling out Pascal’s name as they saw his name and nationality written on the front of our car. Travelling up through the corridor of people directly behind Pascal, I felt the emotion from the fans and the euphoria of performing in front of a big crowd – with none of the pain involved in actually riding! In fact when the wind picked up and it started to rain I was even more thankful I was in the car and not out there on the bike. 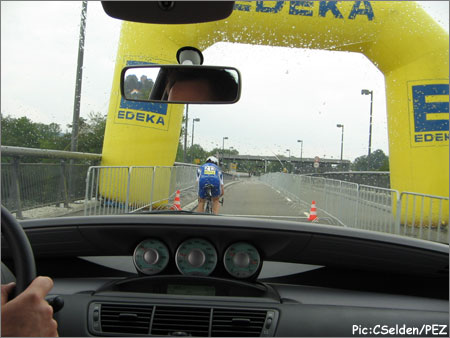 And here comes the rain…

Flying home now over the final 6kms Pascal appeared to have a small moment of weakness as his pace dropped a little, but Lukas was straight onto the ‘radio’ again and was outside yelling encouragement. In the end Pascal crossed the line with a respectable time only 3m43s down on race and tour winner Jens Voigt. Well entrenched in the top half of the field, it was certainly a good ride – but what did the man himself think?

“It was too flat for me. I need more hills where the big rouleur will be stopped and I can push harder…… The little hill was good and I was happy that the little rider was just in front of me…….. It was good to catch that Astana rider. I did around a 47 or 48 average and maybe that’s top 30 or 40 I don’t know it’s hard to tell there are a lot of good riders here.” 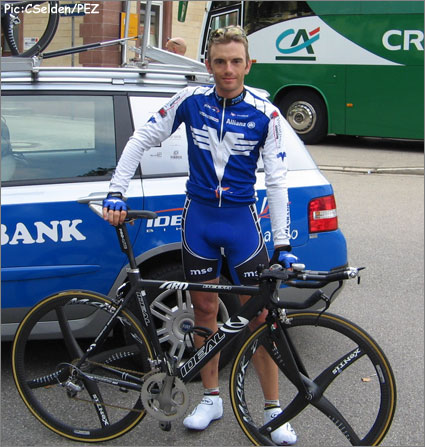 Well it certainly was hard to tell, 40 seconds faster and Pascal would have been in the top 30. Adversely 40 seconds slower and he would have been in the 80 – 90th bracket. That’s the strength of the Protour races, not just some high quality riders, but high quality entire fields with real depth in each squad. In the end Pascal came home with a time that was good enough for 57th place on the day out of a possible 162 riders.

Overall quite a good day out for team Volksbank and Pascal Hungerbuhler with a solid ride in the time trial performed after a very tiring and weather challenged Tour of Germany. Stay tuned to PEZ for an indepth interview with Pascal as we find out about life racing in a small team on the world stage and about his preperation for Volksbank’s next big race, the Zuri-Metzgete (Formerly known as the Zurich World Cup).