Course Preview: The 2014 Milan-Sanremo will for the fourth time break with tradition by adding the new Pompeiana climb in the jagged end of the 300km route. The addition makes pro cycling’s longest Classic even tougher, and hopes to spoil the sprinters’ dreams. PEZ takes the first look.

In the original race route at the beginning of the 20th century there was no Poggio, no Cipressa and no Manie – how times have changed. These three climbs have been included in the last 50 years to try to avoid bunch finishes and to give a more thrilling finale, and the organizers have managed to find yet another new climb for 2014 – The Pompeiana. If the first two solutions each resisted for about 20 years, the third one (the Manie) was too far away from the finish line to really change the story.

Rumors about Pompeiana have been circulating for about ten years as the RCS were looking for a solution that could help more selection in the finale. In 2008 it happened that a landslide on the way to Capo Noli forced the race to divert on the Manie climb, between the towns of Spotorno and Finale. This climb is hard, but too far from the finish (about 90km). So the effects it had were minimal. When last September I heard that the Pompeiana was included and the Manie cancelled I understood the RCS decided to have a very different race from the one we’ve seen in the past 15 years.

In a beautiful day in mid December I was in Genova, my birthplace, and I took the opportunity to drive toward France and to stop just before Sanremo to check out first hand this new climb of the Milan Sanremo: the Pompeiana. 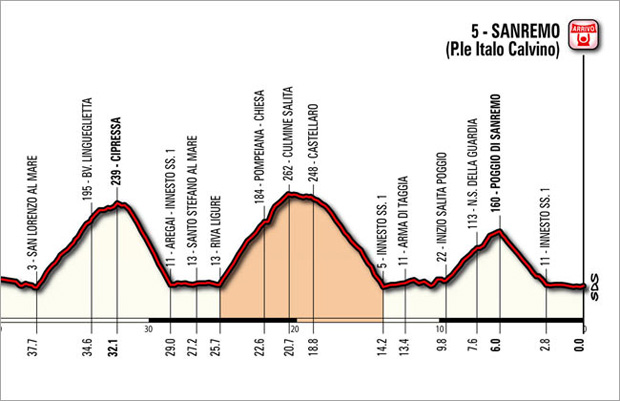 The new look Milan Sanremo puts the Pompeiana climb smack in the middle between the legendary climbs of the Cipressa and Poggio with the summit just 20km before the finish.

The climb starts immediately once you leave the main road, at 25 km to the finish and just after 3 km from the end of the Cipressa descent; in that moment usually the bunch is regrouping after the crazy downhill but this time there won’t be time to organize anything: the slopes are aggressive at the very beginning and they continue hard till the first switchback. 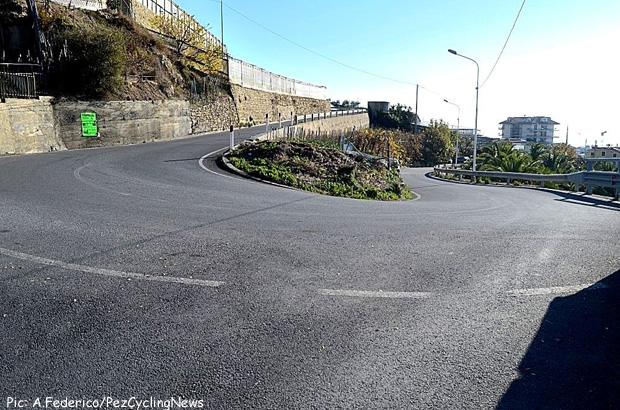 The first switchback comes after half a kilometer of climbing then the slope reduces a bit. The direction turns from the mountain view to the sea view.

The slopes are now more gentle and the general look is very similar to the Poggio. 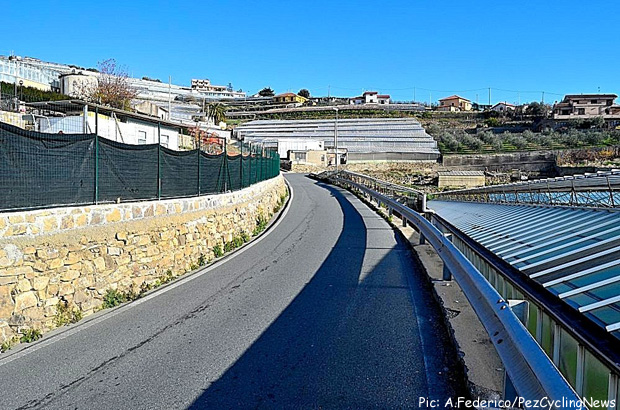 Very similar to the Poggio climb – in a few hundred meters we are out of the town of Riva Ligure, but surrounded by hundreds of greenhouses. 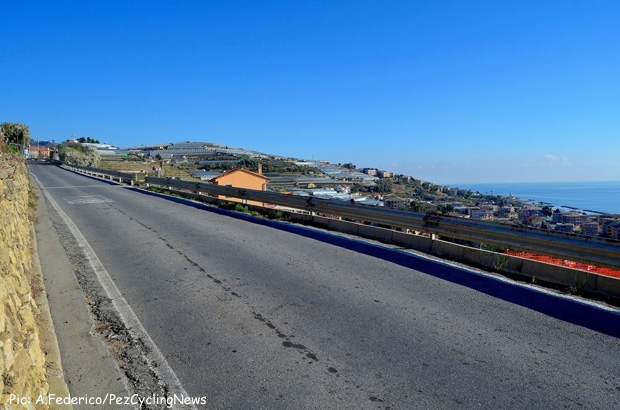 At this stage the road looks east, in the opposite direction of Sanremo, the view opens to the Mediterranean but the riders won’t have time to enjoy it: the climb is still demanding but not too hard at this point. 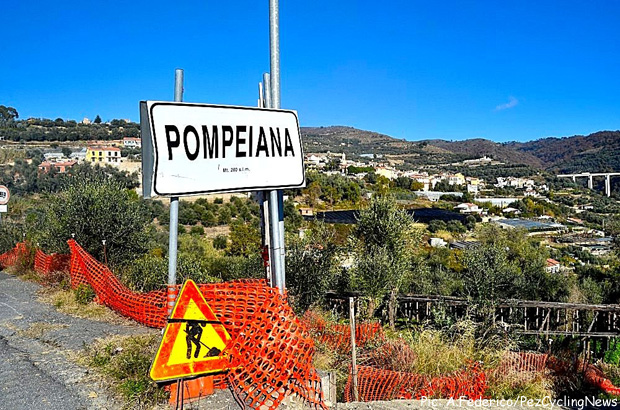 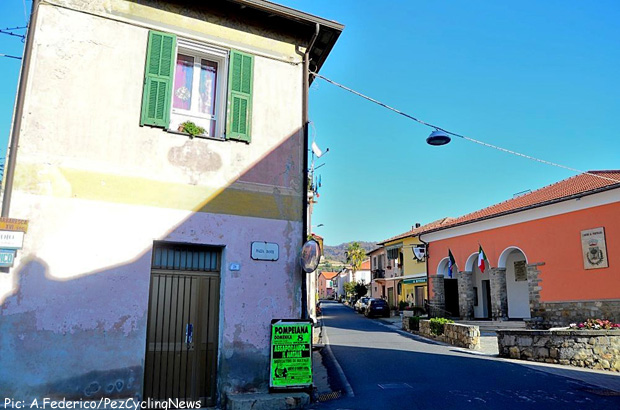 Another switchback is located in the town of Pompeiana: there will be a strong fight to be in first at this moment and the reason is simply that after the church, located at the end of the town, it will be a different story. The road becomes narrow and the climb very steep. It’s just half kilometer but is hard! Very hard. 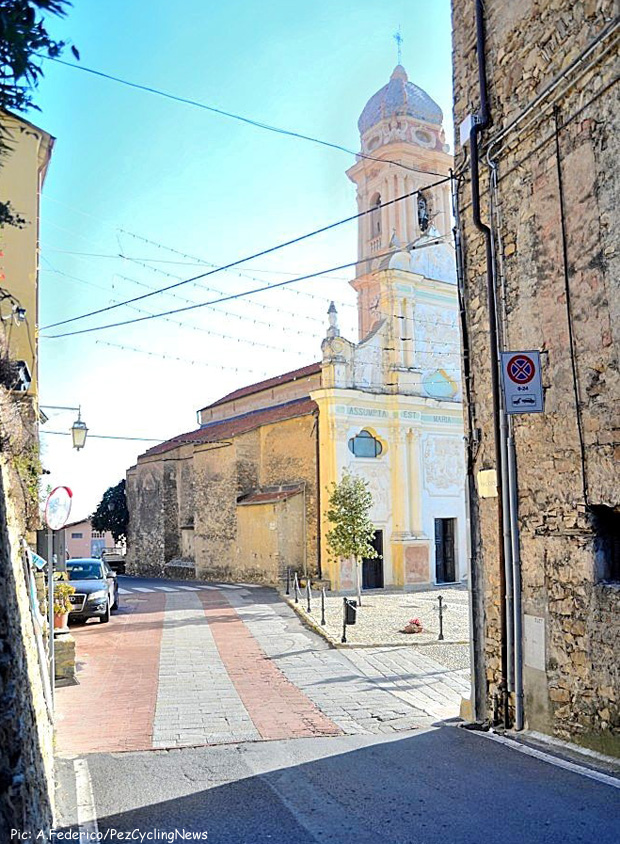 This is the last part of the town with the beautiful church dedicated to Santa Maria Assunta. 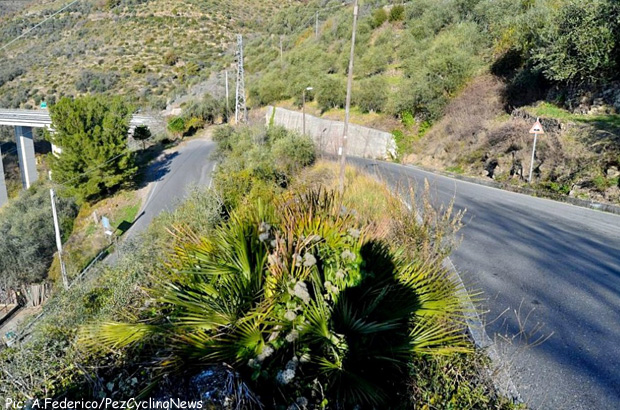 There are five hundred meters here that are really steep, above 10%. There is no other piece of road so hard in any part of Milan Sanremo.

Leaving the church behind there are two nasty switchbacks viewing down below the highway to France and after that the road continues to climb for half kilometer alongside olive trees; this part will make a lot of selection. 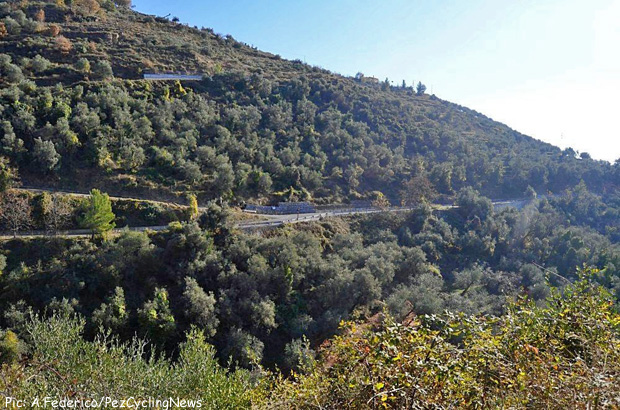 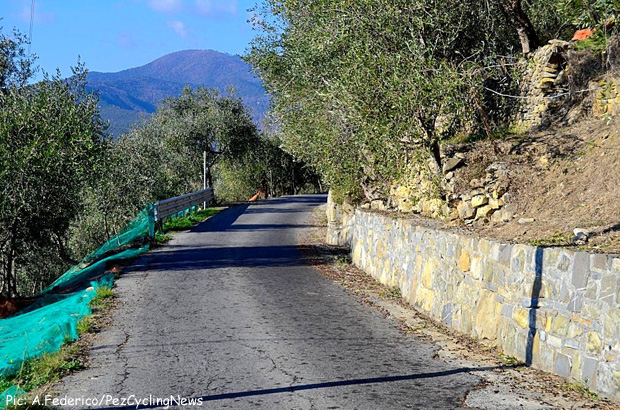 But what will really change the race is the descent. The first part is very dangerous, hidden by the olive trees with two very dangerous bends where the riders will risk a crash down below the hill (I hope the RCS will fit a couple of very strong nets). I think all riders should inspect this road before the race, and even in doing so, will be very dangerous anyway. 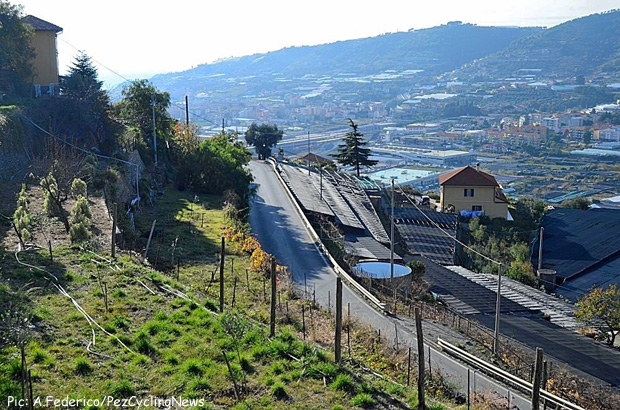 The second part of the descent is less difficult; riders will need a big gear and a lot of power to launch the speed after the three switchbacks before coming back to the original route of the race, just five kilometers before the beginning of the Poggio. 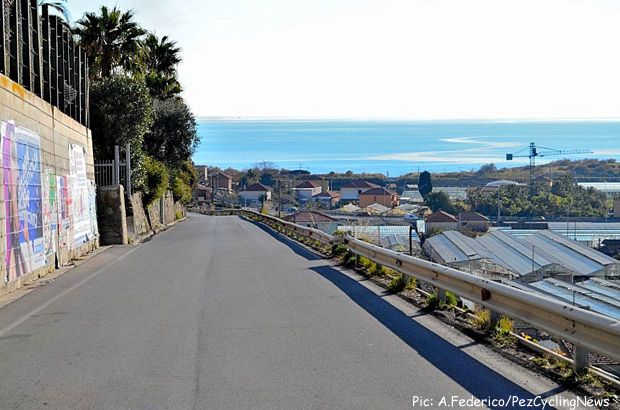 The last hundred meters of the descent before the race rejoins the original route, just 5 km before the Poggio. The Mediterranean sea has a place in the front row to enjoy the show.

The second part of the descent, after the town of Castellaro, is less favorable to the breaks because the road is large and a small pack could ride at much higher speed than just one or two riders ahead. However the new climb will make the change. I think there is little or no chance that one team could regroup and control things before the Poggio climb. This new climb of Pompeiana could well be the new make or break point of the race – or not? Whatever the case, it should be a great race!

Team NetApp – Endura aims for the Tour de France in 2014