Antonio Cruz has gone through an interesting change of scenes over the past few seasons: ProTour Discovery to domestic pro team Toyota United, and now for 2007 back to Discovery. PEZ chatted with Cruz about the changes, time at home, training, Basso, and his thoughts on some testy topics in Part One of a two-part interview.

PEZ: First off Tony, the important question: are you doing cross this fall/winter?

Antonio Cruz: No, not really. It’s kinda hard, but I think I’ll just go watch my kids play soccer. I might go to one or two this year. I love ‘cross. It’s awesome.

PEZ: How old are your kids? 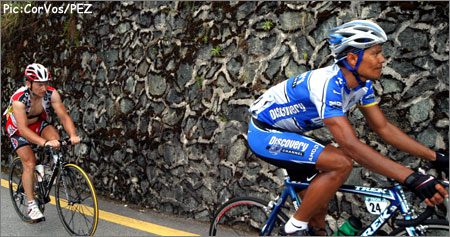 Tony in 2005 in Discovery colors. He took a year hiatus to race domestically, but he’s headed back to Europe in 2007.

PEZ: So how will it work for next season, will you move back to Girona?

AC: I’ll definitely move back over. It’s really the hard thing, moving everybody over, making it so that it works for everyone. We’re looking into homeschooling everyone; homeschooling for 3-4 months and letting the kids play soccer over there. That’ll be good.

PEZ: The last few seasons have seen some serious team changes from Discovery to Toyota and back again, what’s the story?

AC: Leaving Discovery was more to be with my family. It was a big transition phase, especially with Brandon starting high school. The opportunity to race for Toyota came up and it just seemed perfect, but after a couple of months racing here it just wasn’t as motivating and fulfilling. Then I started thinking about what I wanted to do with my career, and thinking about going back to Europe. I started discussing it with my wife, and when I finally convinvced her, I called up Johan. He was surprised to hear from me, but he was more than willing to offer my old spot up.

PEZ: This is a different Discovery that you’re returning to…

AC: Yeah, it’s going to be interesting. When I called Johan, I wasn’t expecting these changes: 10-11 guys moving on or retiring. Then I started looking at it in a more positive way and realized that I’d have some seniority and possibly some opportunities for myself, as well as helping George in the Classics. It seems like it’ll be a really different program; I’m looking forward to it. It’s pretty dramatic, but I think it’ll work out to my benefit. 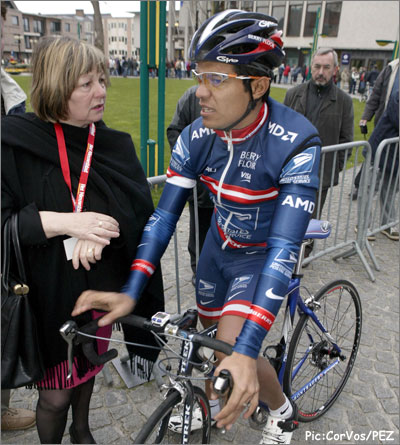 PEZ: You are gaining one teammate in particular that is causing quite a stir at the moment: Ivan Basso. Your thoughts on Basso?

AC:Just from racing with him, I think he’s a class act. He’s a guy that can show class and be a gentleman on and off the bike. I think that’s really hard to find from someone of his calibre.

I look forward to racing with and for him. I think it was a very smart move by the team.

PEZ: What are your thoughts on the ongoing fight against doping, some might call it a witchhunt – has it personally affected you?

AC: It’s really affecting everybody, the racing industry, riders, everyone. It’s such a mess and it makes everyone look to me, like idiots in the world of sport, and that hurt me personally. I want to continue being involved in cycling when I’m done with my career, but you don’t hear about stuff like this in anything but cycling, and it bums me out. My friends call me and they ask me what’s up, and I don’t know.

We have to have a union, there has to be some cameraderie – what a union has to be for all of the cyclists, because that’s how other sports avoid having their name plastered across the world in such a negative fashion.

A lot of people, when I talk to them now, the first thing they want to know about is doping, and that’s not why I race my bike, it’s not why I do this. Doping is a problem in sport, not just cycling.

So I guess I do take it personally.

I’d really love to start a union to get things going, I’m going to talk to George and see what we could do. It may help everybody. Dopers might have to deal with the union before anything happens, because we won’t accept that – we’d clean up the sport and avoid this kind of bad press in the future.

PEZ: What are your thoughts on the DNA controversy?

PEZ: After this year you spent in America racing, what would you say are some of the changes you’ve noticed?

AC: I did notice in the US that a lot of really good stage races are gone, and there are a lot more in the way of crits. Then you have awesome races like Georgia and California and now Utah. It seems to be making a swing back to stage racing. I can’t remember doing so many criteriums before. I like criteriums, but I really like stage racing and good, long one-day races, and you don’t realize that until you come back. I know it’s different, but unfortunately it wasn’t anywhere near the same.

I got used to doing San Sebastian or Milan-Sanremo, but we just don’t have that kind of stuff here. Philly is the closest we get to the big one-day races, so after five years in Europe of doing the biggest and hardest stage and one-day races I came back and thought: What am I doing? 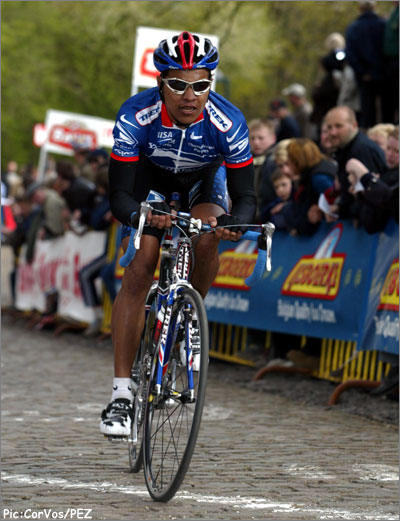 Tony Cruz plies a lonely furrow in the Ghent-Wevelgem.

PEZ: What does your winter training look like right now?

AC: I started back at the beginning of November. I’m really going to try and focus on gym work this winter, but this week hasn’t been so hot. I really want to focus on getting some of that power back. I seem to lose a lot of muscle tone in general just from riding the bike constantly. I’d like to focus some on my upper body and build a little more in the legs.

On the bike I’ve been riding 3-4 hours usually, no intensity, mainly with friends and groups. I should be receiving a training program soon, something a little more structured from Pepe Damarti [Discovery team trainer]. I’ve worked with him on and off for about four years. He’s a really good guy. Every year he learns tons more and tries to tweak the training a little bit to make it even better.

PEZ: DO you do any other sports?

AC: I like running. My cousin moved down here from Merced, and we’ve been running together, but now he’s out in Texas for a month and I’ve lost my running partner. I’ll try and get out there for a little bit though. I’ve always liked running. It’s kinda like biking: pick where you want to go, weather doesn’t really matter, plug in your iPod and just go.

PEZ: So how’d you get started racing bikes?

AC: I used to play basketball and run a lot of track, those were my favorite things. My dad got into cycling, probably when I was 7 or 8 and he started going to the local races, and I remember when he bought his first race bike, it was a Masi. It cost him a boatload of money! I started going to races with him and saw that there were a lot of kids my age doing the whole thing with their bikes and helmets, and I wanted to try it. I was 12. I thought it was pretty cool, and I liked it. Every weekend I was pretty much racing. By the time I was 13 or 14 my Dad and I were traveling quite a bit around California, even getting as far out as Colorado for some races too.

Sit or Stand: Tradeoffs in Efficiency?