Roadside Rest Day: A day at the Tour presents hundreds of options for Roadside adventures, and sometimes it’s tough choosing which path to follow. One story I was determined to get on my trek through the Vosges and Alps, was an interview with one of the Tour’s Podium Girls.

This being France, there are only two ways to do things, the ‘correct’ way, and the ‘incorrect’ way. So I started with a couple of emails to my ASO contact asking for help and proper introductions. To my surprise, he suggested I go direct to the source – maybe he was just trying to get rid of me, but at least asking people for stuff is an area I’ve had some experience in. And this being France, I’ve learned to just keep asking until I get the answer I want. 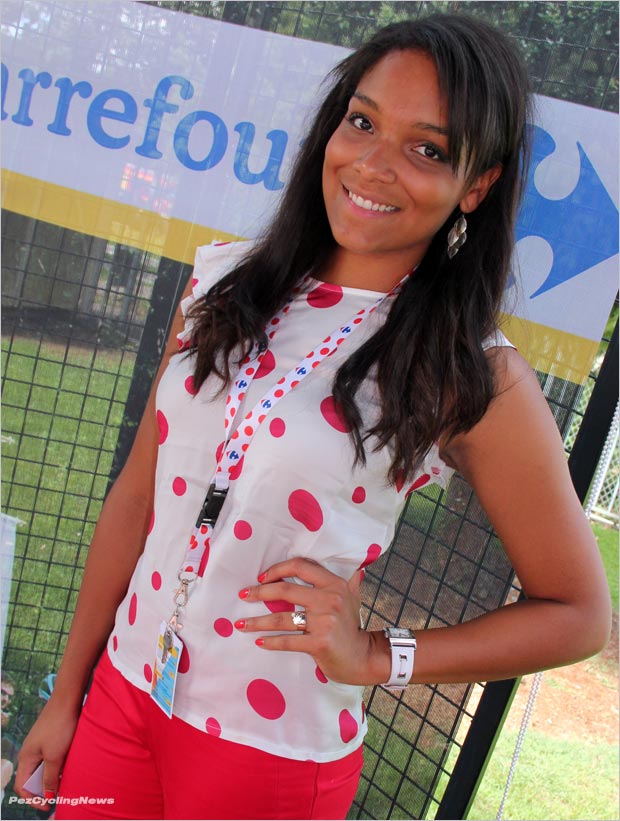 The stage 10 start village in Mulhouse was a perfect setting to approach one of the the podium girls with my request – the sun was out for the first time in days, and the place was abuzz with some good Tour vibes.

The Tour podium girls work full time on the race, and are hired to work specifically with individual sponsors, hosting vips at the starts and finishes, and presenting winners’ jerseys at the end of each stage. Spotting them in their sponsor tents is easy – they’re posing for photos, serving drinks to guests, or handing out promo items – finding them free to talk is the hard part.

I first noticed Ines in 2012 – her first Tour – as presenter of the polka dot jersey. Her beaming smile, statuesque figure (she’s 177cm tall), and dark chocolate skin made a stunning impression in her bold red & white presenter’s dress. 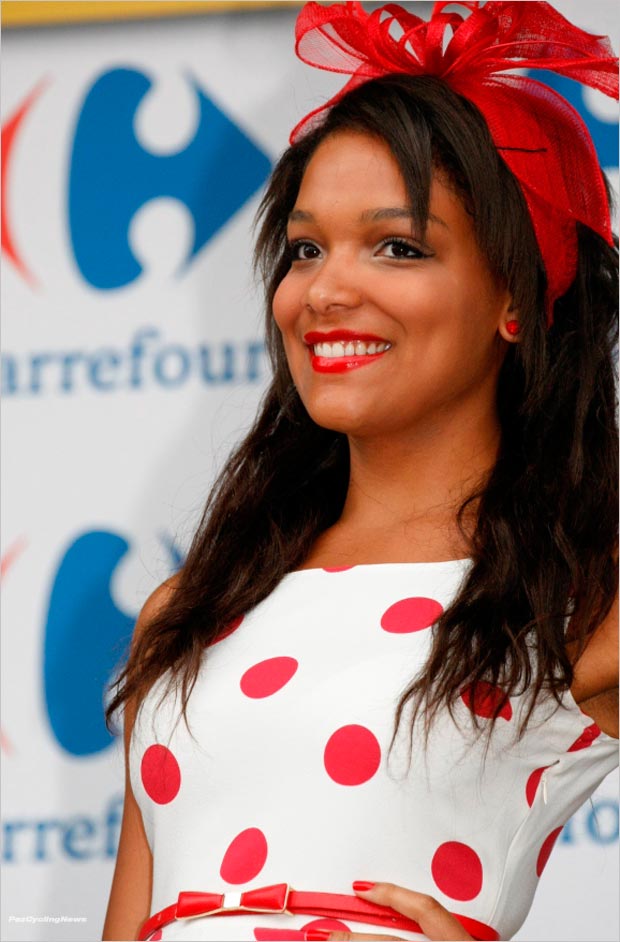 I spotted her at the Carrefour sponsors booth – extra busy with the duties I’d mentioned above and also because Richard Virenque was in the tent signing autographs.

I come back later, after the crowd has moved on, and see her standing alone in the shaded back area of the tent. Taking my chance, I circumnavigate the outside of the tent to an opening just beside her where I lead with my usual intro:
“Excusez-moi, je m’appelle Richard, parlez vous anglais?”

Ines is standing with another of the polka dot podium girls – a statuesque auburn-haired beauty named Melanie. Ines responds immediately: “I do…” She sounds eager to help and at least interested in whatever I have to say next. But she graciously agrees to an interview – and now is a good time – so let’s roll the tape!

She towers in her 3 inch heels, I’m guessing a good 5 inches above me, but her confidence and assurance put me at ease (enough so I can think up a few semi-coherent things to say) – all the while trying to not overwhelm myself with the reality that I’m actually interviewing a Tour podium girl…

Ines is 25 years old and hails from Lille in the north of France and finish town for this year’s stage 4. She’s been on the Tour for 3 years, but like most of the other hostesses, she’s a model working with an agency in Lille, doing different work in advertising, publicity, and fashion shows for sports brands like Decathlon. 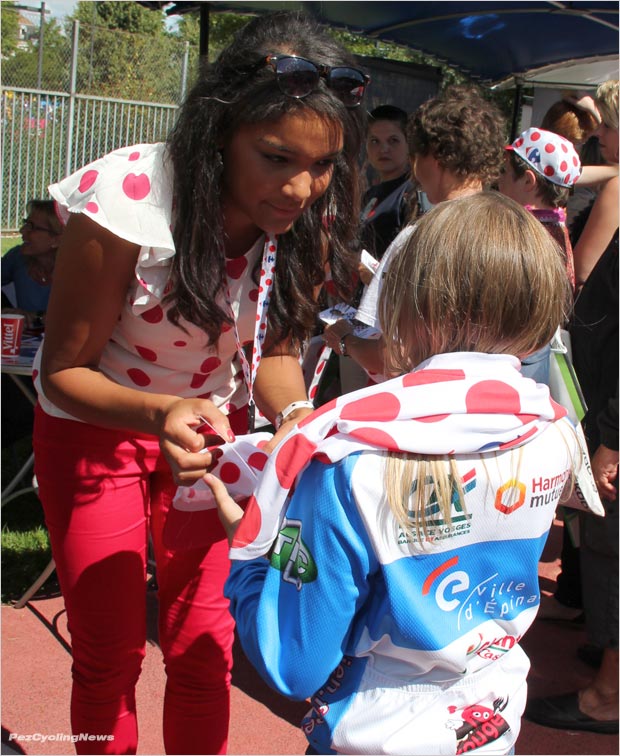 For this Tour she’s working specifically as a hostess for Carrefour supermarkets, sponsor of the Polka Dot (maillot pois) best climber’s competition. They’re one of the biggest sponsors with 50-60 people in the caravan.

She speaks English with that kind of French accent you only see in movies, the kind that would attract a lot of men in other English speaking parts of the world. She knows the language, but pauses occasionally and mixes up a word here and there. It takes me a minute to follow as she tends to begin the next sentence before the last one is finished – which only adds to her charm.

Her voice is soft, smooth like velvet would sound, but confident and clear. She answers quickly and is engaged in our conversation. Here words flow together and sometimes she starts a new sentence before she’s finished the last one. It’s a charming combination. I try to stay focused.

Pez: Thank you for talking with me – can you please tell me your name?
Ines: My name is Ines, I’m 25 years old, I’m from Lille in the north of France.

Pez: How did you get started working for the Tour de France?
Ines: I knew one of the podium girls before me, she is my friend, and she offered me to…

Pez: The Tour is a huge spectacle and we all think it’s a whole lot of fun. I know for myself that the days are long and exhausting – what are your days like here?
Ines: It’s a lot of work – it’s not just modeling (say maw-del-LING). My day starts very early because my hotel is far from the departure [6:00am wake up most days]. I have to drive here, then we have to wait on the VIP’s guests, give them breakfast and goodies, be there for them all morning long. Then we take the car and go to the arrival (sounds like she’s saying AH-river) by encourse [driving on the race route] so it’s a bit long. Then we have to do the same job in the arrival, welcome vip guests and go to the podium at the end of the day. Then we go to the hotel which is far from the arrival, so we drive a lot. We sleep bits [she says ‘beets’]. We have dinner together, then a brief together, so we go to bed around midnight. It’s tiring, it’s hard, but… we love.

Pez: What do you like about the job?
Ines: … I like to cross France – to go everywhere in France and discover new cities. We have a good team – Melanie’s a good friend who I see during the year (she motions to the auburn-haired girl). I like because usually it’s sunny, so it’s like you work and you are on holiday at the same time you know what I mean? Tour de France is a big party so everybody here is smiley and is happy so it’s not difficult to work.

Pez: Do you get to know the riders at all? Are there any rules about talking to the riders?
Ines: Some riders come to the village before the departure, and we talk with them at the podium, but we don’t know them as well… This is not what we want. There are no rules – I think we are professional enough to know what we have to do. We are kind and welcoming when they come in the village – if they want to talk we can talk, or if they just want to have a drink… they just want to have a drink. At the podium it’s very fast so we can not talk, but … I mean, one of the riders I know him for three years – he’s like a friend now, I’m really happy to see him when I see him, but that’s it.

Pez: Will you tell us his name?
Ines: No.
[She says this without hesitation, and then we both laugh.]

Pez: After the Tour, what’s next, what else do you want to do?
Ines: My job is a resident in medicine – I study sport medicine, so I would like to work in a professional team, maybe cyclists or another sport…

Pez: Do you cycle yourself?
Ines: I cycle myself, like ‘cross of mountain bike. I live close to the beach so there are a lot of different roads to relax.

Pez: That’s great- thank you – may I take a couple photos of you?
Ines: (breathes a sigh of relief, then laughs) of course… it’s hard for me to speak English.

She’s good at this – professional, but personal. I get zero sense that she’s simply doing a job, and think she really loves this work and it shows.
• Check put the Maillot Pois Instagram page @hotessedumaillotpois